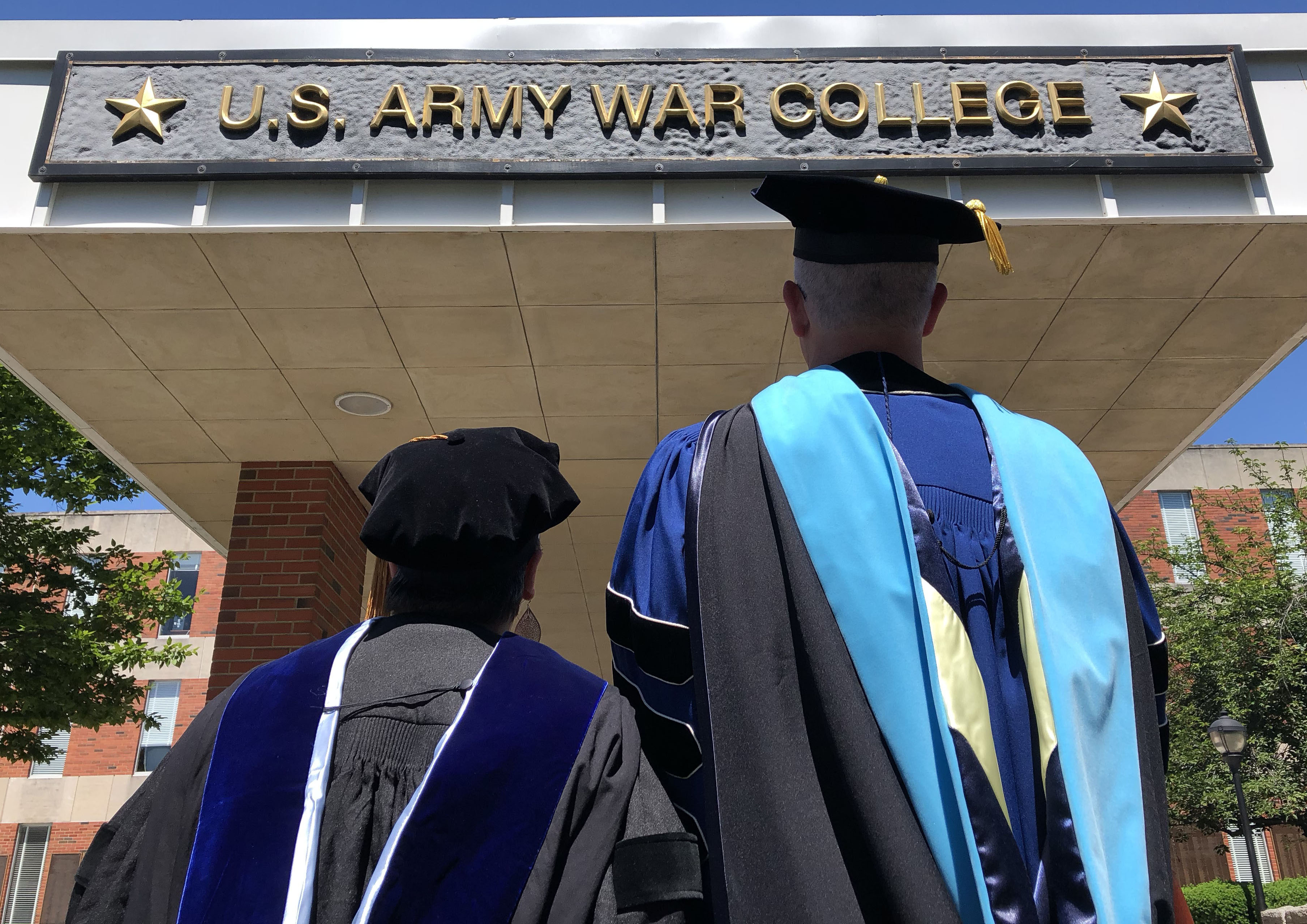 When I arrived at the US Army War College in August 2017 as the Harold K. Johnson Chair in Military History I walked into an institution debating its future.  During my first weeks at the War College, I met with the leaders of the institutions with which my position was associated – the provost and the director of the Army Heritage and Education Center, which houses the Army’s historical archives. Within minutes of beginning the discussions, each asked whether I thought that the War College should employ more civilian instructors. Of course, I counted as a civilian instructor myself – sort of. I constituted one of the 30 to 40 civilians brought in on one-to-two-year contracts, ranging from endowed chairs like mine to what in the civilian world we would call non-tenured faculty – lecturers, part time instructors, adjuncts. I was a civilian who had come to spend a year with the US Army, hoping to learn what I could about bridging the so-called civilian-military gap.

The existence of that gap lay at the core of the faculty composition question. The US Army War College operates as a senior Professional Military Education (PME) institution alongside the Air War College, the Naval War College, the Marine Corps War College and National Defense University. The Army War College’s mission is dual, encapsulated by the name itself – “war” and “college”. On the one hand, as a military institution, it must train senior leaders before they take command at the brigade level or take on complex new staff positions. On the other hand, as an institution of higher education, it must provide intellectually challenging curriculum and instruction to produce educated, informed, critically-minded senior leaders. Over the course of my year at the institution, I came to understand the question that the college’s leadership asked as reducible, at some level, to which side of the college’s mission needed more emphasis: more “war” or more “college”?

Of course, such a broad question raises far more issues than the civilian versus military composition of the faculty. I came to understand that everything from the course list to the organization of students into classes, and from the nature of written assignments to the extracurricular expectations, all reflected the dual mission of the institution. But the faculty composition is perhaps the most obvious and relevant measure to gauge how the institution is answering that question, given the central role faculty members play in determining the other aspects of education at the institution.

When I arrived at the War College, I did not yet know the statistics of civilian versus military instructors, but the view on the first day when uniforms were required (the War College has dress codes) immediately made clear the large numbers of active duty military faculty. Even many of the instructors not wearing uniforms, however, looked as though they had only recently mothballed them – military haircuts, a military style of “casual dress,” military bearing, and of course military jargon abounded in the hallways and classrooms. Even without the statistics, it was obvious how military personnel and retired military personnel guided the institution.

Some might object that I count former military personnel as “military” faculty, as they technically are no longer military personnel. While I recognize the nominal validity of this argument, I reject its substance. As Erving Goffman pointed out decades ago, military personnel lead an “enclosed formally administered round of life,” and removing the uniform does not remove the effects of this life. Indeed, retired military members of the faculty are not seen as equivalent to “pure” civilians by the War College itself. They are often hired precisely because they differ from civilians: they have familiarity with the military, “know” what colonels do, and understand how to operate within the military’s bureaucracy. Even as they are categorized technically as “civilians”, their military insider status is often claimed as a special asset. The not uncommon practice of hiring instructors directly from their military billet into a civilian billet demonstrates how military personnel remain “military personnel” even when they remove their uniforms.

Career PME faculty members, like Joan Johnson-Freese, have weighed in on the balance of military versus civilian academic influence, and I do not have the in-depth knowledge and experience they do. But even my one year of experience in teaching, researching, and observing at the War College offered a clear answer to the question posed to me by senior leaders at the school: Army leadership should inject more “college” in the War College by hiring more civilian academic instructors.

Outsiders who have different assumptions about the military Are more likely to question received wisdom about military and national strategy, defense management, and even operations planning.

Civilian academics without military service background can strengthen the mission of the War College in five ways.

Employing more full-time, permanent civilian academic instructors will foster connections between civilian society and the military that are essential to healthy democracy and to a well-regulated professional military. Employing more civilian professors brings more people like me – people who know the military only from research – into direct contact with military personnel. This contact allows us to understand the tasks military personnel undertake. A great deal of research documents the military-civilian gap, and many commentators from the military side have bemoaned this separation. Being a civilian at the War College has increased my sense of understanding and ownership of the military, which, after all, is a vital public institution – and one specifically subject to civilian control.

Civilians are likely to have broader and more critical views of the military. By “critical”, I do not mean necessarily leveling criticism, though that can be valuable, but taking a holistic, questioning, evidence-based stance toward the military and national security. Coming into classes with an outside perspective is invaluable in an institution that sociologists recognize as a “total institution,” one that, unlike most civilian employment, envelops nearly every aspect of life. Senior military leaders who have grown up in the total institution of the military could hardly fail to have a critical perspective on it; but their critical perspectives are those of insiders, and of personal experience. Outsiders who have different assumptions about the military are more likely to question received wisdom about military and national strategy, defense management, and even operations planning. And civilians—outsiders—can bring civilian institutional experience and evidence-based inquiry to bear on both management and instruction.

Civilian instructors provide opportunities for students to interact with the kinds of expert civilians with whom students will work when they assume their next assignments. Students leaving War College take on larger and more complex leadership roles that require cooperation with civilians, many of whom are highly educated and experienced in their respective fields. Military leaders need commensurate educations with civilian counterparts in other federal agencies, in Congress, and in the private sector. Knowing how to speak beyond military jargon, and how to understand their institution from the perspectives of leaders in international relations or systems management are vital to leading the military. Civilian instructors provide such experiences, and their presence in the classrooms will better situate military leaders for post-graduate leadership.

Civilian instructors offer a way to bring much-needed diversity to the War College. The heavy reliance on current and former officers as instructors at the War College produces an over-representation of white male instructors. Of the overall full-time budgeted faculty members, only 8.5 percent are women and only 8 percent are non-white. These percentages are starkly out of line with the demographics of civilian higher education institutions. One third of Big Ten university faculty members are women. Many business schools, especially those ranked in the top 40, employ between 20-28 percent women faculty. The percentage of faculty of color at the War College is lower, but more in line with this measure in civilian academia, where percentages hover around 11 percent in the Big Ten. Notably, the small number of women and people of color on the full-time budgeted faculty at the War College is also out of line with the composition of the officer corps of the US Army itself, where around 18 percent of active duty officers are women and 27 percent of active duty officers are nonwhite. The lack of diversity suggests that instructors are drawn from too small a pool of applicants, thus leaving out of the classroom many potentially highly qualified candidates. The number of women who hold PhDs has grown enormously in fields essential to the War College curriculum such as political science, history, regional studies, and organizational behavior. Numbers of African American PhDs are growing, too, with over 20 percent of history PhDs awarded to African Americans. In addition to enlarging the pool of excellent instructors, using civilian hires to achieve greater faculty diversity will produce positive outcomes for student learning and achievement. Research now shows definitively the instructional strength of diversity in the classroom.

Civilian academic instructors are more likely to be active researchers, and to bring that vanguard knowledge into the institution. This is really the nub of the more “war” or more “college” Only 10 percent of the active duty military faculty members at the War College hold a PhD or a JD. Of the former military service civilians, only 41 percent hold PhDs. By contrast, purely civilian instructors with no military experience have by far the highest educational levels – fully 85 percent of them hold doctorates. At the War College, these pure civilian scholars on average have written more articles and books, delivered more conference papers, and participated to a greater degree in the development of their fields and subfields than military faculty or former military faculty. Other graduate professional schools like business schools which, like the War College, must offer some clinical training, would never dare to operate with as few PhD professors as the War College. Between three quarters to four fifths or more of faculty members at most of the top 40 business schools, from Stanford to Notre Dame to University of Pittsburgh, hold PhDs. The reason is that career academics pursuing cutting-edge research – whether in management and finance, political science, area studies, history, strategic studies, or psychology – bring the most current empirical studies and theory into the classroom. Depriving War College students of civilian academic faculty is thus likely to deprive them of the best available knowledge in the academic fields central to the War College curriculum.

The War College is hardly the only institution of higher education engaged in self-reflection at the moment.  For civilian colleges and universities, high costs, declining funding, and changing job markets have made it necessary to think deeply about their roles in today’s society. Some of the questions civilian institutions face about what is an appropriate education, and how best to deliver it are similar. But the questions facing PME institutions are also unique to the military – how best to prepare leaders in a vast institution charged with executing state violence and maintaining defense, and how best to foster a healthy relationship of this institution to civilian society? Both the questions shared with civilian institutions and those specific to the military may be better addressed by a commitment to hiring more civilian academic full-time budgeted faculty members at the War College.

[1] All USAWC faculty information obtained by the author, courtesy of the Office of the Provost.