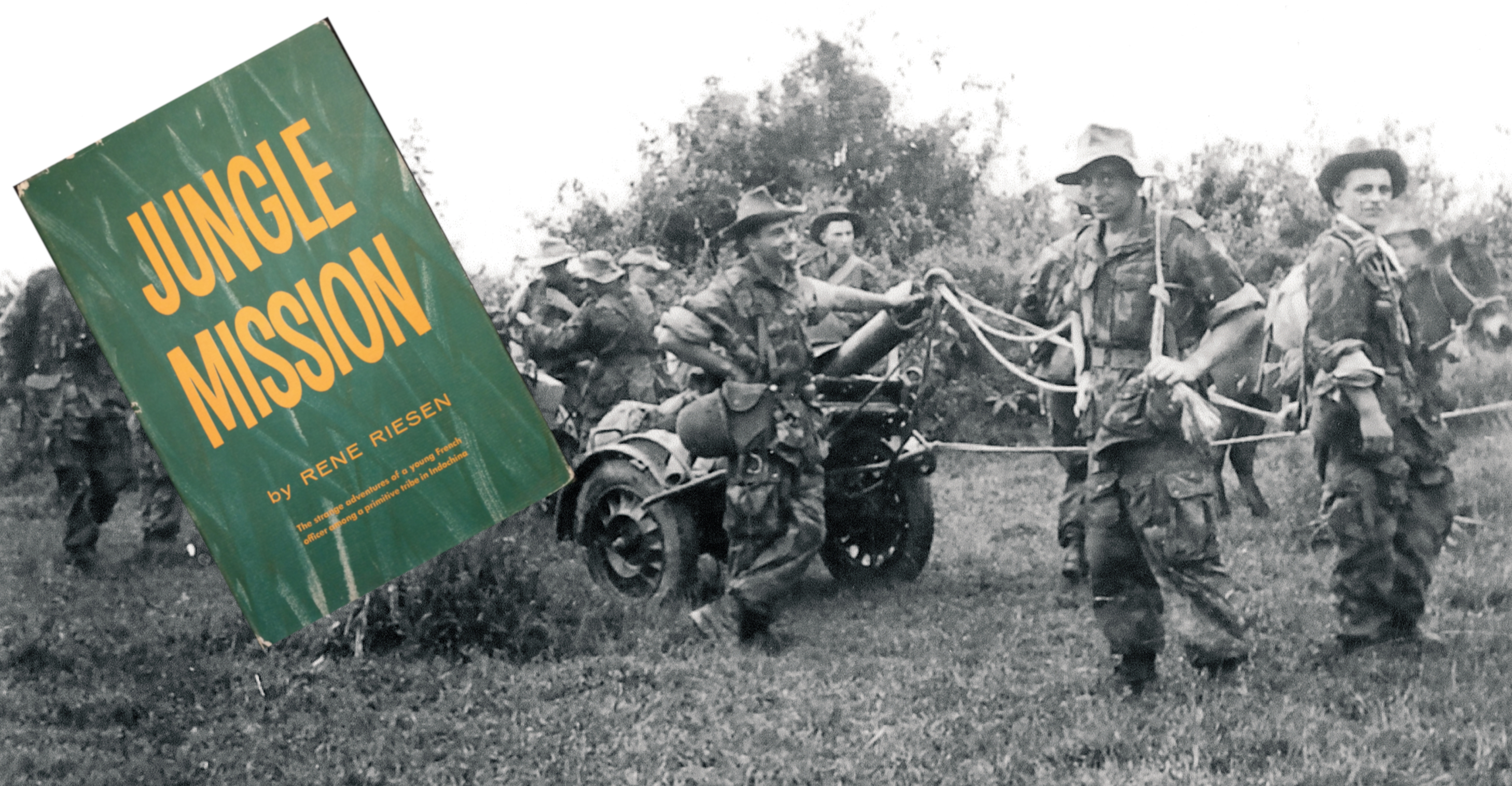 The jungle is the natural refuge of the weak.

In many military cultures and in the Western popular imagination, individuals who go native or turn rogue evoke curiosity and often revulsion.  Soldiers who take off usually face court martial and do not share much in common with their more responsible peers.  Historically, turning rogue is mostly synonymous with sociopathic behavior, such as the archetypical Mr. Kurtz in novelist Joseph Conrad’s Heart of Darkness and filmmaker Francis Ford Coppola’s reimagining of Mr. Kurtz as Colonel Kurtz in Apocalypse Now.  Conrad’s larger point was that Kurtz was as sophisticated as he was susceptible to the madness inherent in colonialism, so much so that “All Europe contributed to his making.” The descent of Europe into World War I, several years after Heart of Darkness’ publication, further supported Conrad’s argument that a society’s sophistication did not render it invulnerable to insanity.  In a similar manner, Coppola uses the warping of the previously disciplined and capable Colonel Kurtz as an allegory for America’s madness in the intervention in Vietnam.

The idea that going native entails the violent pathology of the Kurtz’s stands in stark contrast with René Riesen’s efforts to support the Bahnar Tribe during the First Indochina War.  Riesen was a supporter of Vichy France during World War II and emerged from that conflict to join French colonial forces as a Non-Commissioned Officer in Indochina.  He recounts his story in the autobiographical Jungle Mission (1957), which epitomizes and challenges the idea of going native. Riesen’s story is one that most students and scholars have never read, let alone heard of, and it deserves re-evaluation and a more prominent place among readers.

The contemporary historical interpretation is that colonialism created an endless string of monsters, such as French Captains Paul Voulet and Julien Canoine in West Africa.  One of these monsters is too many, but were there rogues who were exceptions to the popular interpretation?  In other words, were there any responsible, competent, and genuinely altruistic soldiers serving with honor?  Were there any who served with indigenous populations and supported their tribal goals while fighting communism at the same time?  Were there any who honestly despised communism as much, or more, than colonialism?  Historian Christopher Goscha documented communist Vietnamese’ imperialist tendencies in Southeast Asia and his work stands in contrast to the traditional narrative that it was mostly, or exclusively, Europeans who colonized others. For example, Laos and Cambodia were subject to Vietnamese expansion and colonialism long before World War II and even before French intervention in 1860.  In such a complicated environment, no one had a monopoly on good or bad.

The complexity of the environment in early 1950s Indochina and his counterexample to the more common narrative of going rogue are what makes Riesen’s story so interesting. The officers in the 4th Montagnard Battalion assigned Riesen to work with the Bahnar ethnic group in the southern mountain plateau of Cochinchina – the French name for their colony in South Vietnam – during the First Indochina War.  The French used the term “Moï” for the Bahnar, along with the Rhade, Hre, and other groups as an equivalent for “savage,” and the Americans would later refer to these tribes as Montagnards during the Vietnam War.  Riesen described his assignment, writing “I was a corporal on a special mission in the jungle, alone with a couple hundred hillmen” in the Kontum region.  A senior officer told Riesen,

This is not like life in barracks.  So forget for the time being the sort of duties which fall to a soldier according to his rank in his section or company.  At this outpost, there are seventeen of us, Europeans, officers, and other ranks, as against a hundred and twenty native riflemen, and a hundred fifty partisans…You will engage in guerrilla warfare, be responsible for the defense of an outpost, the opening up of roads, the protection of convoys…If you make an enemy among the natives, he becomes the enemy of us all. Remember that, for he respects or despises us as a whole. (p. 21)

Not only did Riesen embrace his mission, he empathized with the Bahnar tribe to such an extent that he married a Bahnar woman named Crey. Riesen’s conflict with the Viet Minh all occurred well before the battle for Dien Bien Phu in 1954, which adds significant background for readers interested in the First Indochina War.  In the end, Riesen and the Bahnar achieved limited success against the Viet Minh, and after French defeat in 1954, Riesen moved on to Algeria for a similar mission fighting Algerian insurgents.  Riesen met his fate in the Algerian war where he died in a 1956 insurgent ambush.

It is a narrative of best practices in foreign internal defense used to stabilize other countries, and it demands a close reading by any individual interested in irregular warfare.

Riesen’s story is instructive for readers interested in how outsiders help foreign states and local societies stabilize and defend their own countries and communities, and also serves as one of the earliest ethnographic studies of warfare after World War II.  For most readers, the overall twists and turns in Jungle Mission are almost movie ready.  Bernard Fall, one of the luminaries of counterinsurgency lore and the First Indochina War, expressed his admiration for Riesen’s dedication, and especially for Crey who “threw herself in front of him to save him from a tommy gun burst.”  The story of devotion cultivated between Riesen and Crey is instructive.  It is difficult to imagine that Crey would sacrifice herself without Riesen proving his worth in her eyes and those of her tribe.

The very fact that Riesen was there and serving in his specific unit underscores that the French had a greater appreciation of the situation on the ground than is often asserted.  After World War II, Riesen was able to salvage a military career by joining what was initially known as Batallion Leger d’Infantrie d’Outre Mer and later the Batallion de Marche Extreme Orient before it was termed the 4th Montagnard Battalion.  The development of these types of units, in Peter Paret’s assessment, demonstrated that “the strongest feature of French analysis undoubtedly rests in its comprehension that the intermingling of military and political factors in revolutionary movements constitutes not a mark of the primitiveness and lack of development, but a source of power.” They must have gotten something right, because the Bahnar, along with other tribes, survived the war and supported later U.S. operations against the National Liberation Front after 1965

The copy of Jungle Mission I found was one of a handful available through my university’s interlibrary loan.  I first learned of Riesen’s work while conducting research as a doctoral candidate and Jungle Mission explained a great deal about how smart and dedicated professional soldiers could adapt to local indigenous ways-of-life in the mountains in Vietnam.  Unfortunately, instead of awareness of Riesen’s illuminating book, readers of the colonial-era are invariably fed the innumerous cases of exploitation sprinkled with tales of deranged or evil individuals going native, as if that was all that existed in the colonial world of the nineteenth and twentieth centuries.  In King Leopold’s Ghost, Adam Hochschild recounted a cast of Kurtz-like murderers in the Belgian Congo, pointing to King Leopold II as the ultimate sociopath whose greed was barely satiated by bloodthirsty colonizers who manipulated ethnic divisions among Congolese tribes for personal gain.

In contrast and as a balance against most narratives about colonialism, Riesen’s book deserves greater consideration.  Jungle Mission exemplifies applied history.  It is a narrative of best practices in foreign internal defense used to stabilize other countries, and it demands a close reading by any individual interested in irregular warfare.  It is precisely because Riesen went native that the book is so useful.  For armed forces engaging with diverse cultures, Riesen provides an individual precedent and useful analogies that illuminate contemporary problems where cultural intelligence is critical.  Officers, professors, and policymakers interested or compelled to develop operations and policy in and among other cultures will benefit from this book.  Readers will gain much from understanding how Riesen managed his own preconceptions of different ethnic groups and how he learned the importance of living shoulder-to-shoulder with them in a day-to-day sense, and not just as a well-trodden slogan.  For Reisen, sharing the fate of the Bahnar was the way he learned how and why fighting for freedom against communism in Indochina mattered. That is a lost story, and one worth retelling.

Nathaniel Moir is the Ernest May Postdoctoral Fellow in History and Policy, International Security Program, John F. Kennedy School of Government, Harvard University. The views expressed in this article are those of the author and do not necessarily reflect those of the U.S. Army War College, U.S. Army, or Department of Defense.