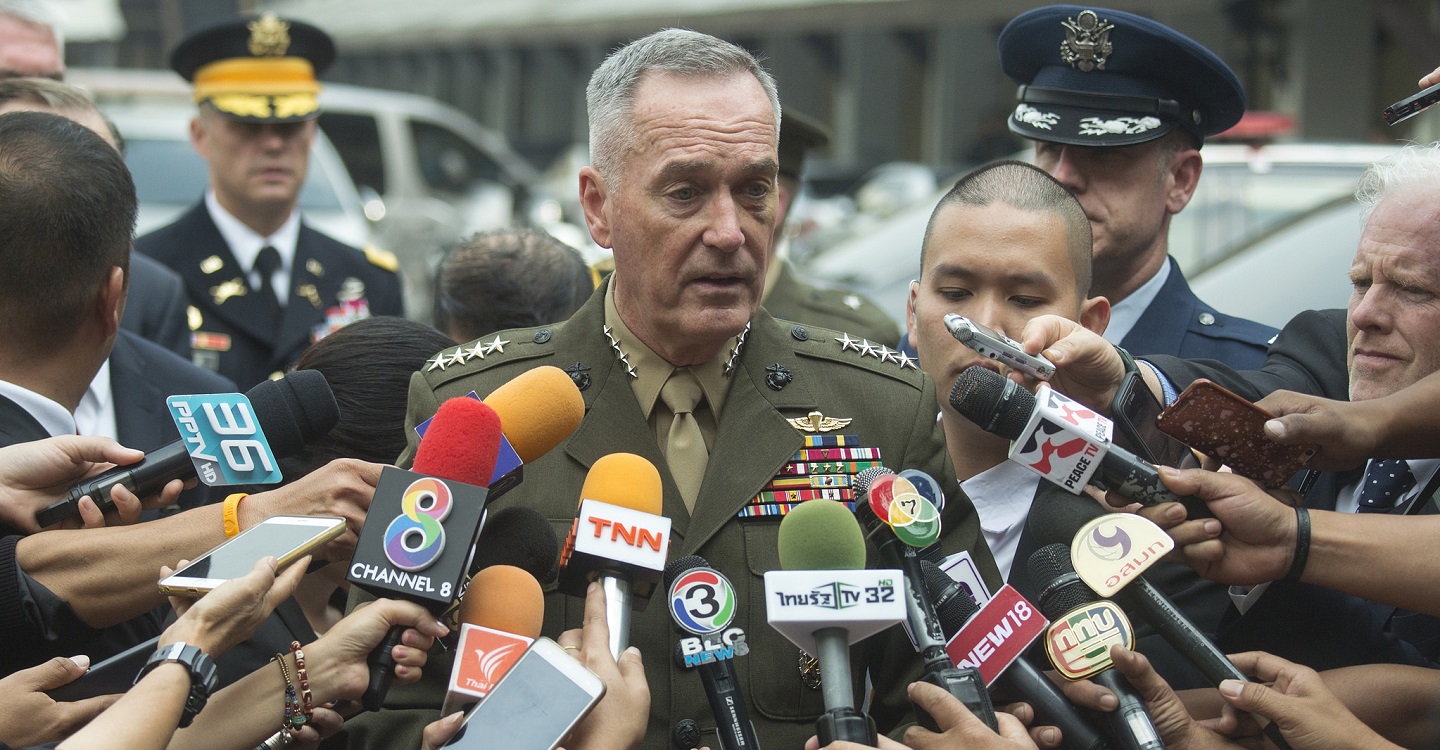 As long as reporters abide by agreed-upon rules of operational security and attribution and make a good-faith effort to provide context and fact-checking regarding the news of the day, the military should continue to work with reporters.

Both journalists and military officers envision themselves members of professions, guided by a particular set of values and professional ethics. Because the professional ethos is so different for each group, the relationship can seem tenuous and fragile. But the health of the relationship rests on the collective professional discipline to reinforce norms that align both institutions with the public interest. For military officers, raised under the banner of selfless service, the trick is to understand the fault lines between the two professional codes, so that they can navigate a polarized society.  True servants of the republic remain engaged with the public, faithful to both the norms of the service and the good of the nation.

The professional obligation to the public means that the press and the military need each other to perform their primary functions. And right now, for the most part, they recognize this dependence. In the best light, the press needs access to uniformed officers to provide accurate, well-sourced, contextualized information to the public about the workings of their government, especially the arm that does violence on the people’s behalf. Less charitably, the press needs members of the military to provide the leaks that generate headlines and revenue-producing clicks—to exploit civil-military divisions within the national security decision-making apparatus.

On the other side, the military has increasingly come to recognize that it needs the press to enable military operations in the information domain, whether to maintain its connection with the public it serves, to help spread its message, or to consolidate battlefield gains by influencing and contextualizing the public narrative. Gone (mostly) are the days when the military placed full blame on the media for snatching strategic defeat from the jaws of tactical victory in Vietnam—although that trope still lingers in the military’s mythology of the past, so there is still more than a little skepticism. More cynically, senior members of the military bureaucracy crave access to trusted media outlets to feed their egos, to help them reverse budget decisions that don’t go their way, and to give them an independent voice in ongoing policy debates outside the constrictions of professional norms and the chain of command.

Both parties in this complicated relationship have incentives to cooperate and incentives to push against the other side. The tension is clearest when deeply-held values are in competition: for journalists, information should be open and accessible (democracy dies in darkness, after all), while for military officers, secrecy and security are often the paramount considerations. A healthy military-media relationship requires each side understanding and respecting the norms, values, and professional ethos of the other.

Since I am a military officer, I will focus on what this means for the military side of this equation. The media side strikes me as straightforward enough; reporters have professional and economic incentives to produce as many of the most interesting stories as they can. As long as reporters abide by agreed-upon rules of operational security and attribution and make a good-faith effort to provide context and fact-checking regarding the news of the day, the military should continue to work with reporters. It should provide access (barring those few individuals who betray sources or ignore pre-agreed conventions). When a reporter does step outside the professional norms – for example by fabricating “facts” or revealing information they had agreed to leave off the record – the military has a right to expect others in the media profession to take disciplinary action, or risk breaking the fragile relationship between the two institutions.

When that discipline does not happen, the military is justified in barring access to those individuals, and even to their organization.  What the military cannot reasonably expect is that reporters providing context will translate into consistently positive perspectives that align perfectly with military talking points.  Punishing reporters or organizations that abide by the media’s professional norms simply because military leaders disagree with a story’s perspective stretches the concept of ‘balanced coverage’ beyond reason.  Worse, it threatens the press’s ability to serve the public as an independent, objective, critical observer.

The perspective of currently serving military professionals has been undoubtedly shaped by the Global War on Terrorism. Even if they haven’t all bought into counterinsurgency (COIN) doctrine they are steeped in its tenets through professional military education, pre-deployment training, and combat experience. They know that the population is the center of gravity in COIN, and perhaps in all forms of war. They understand how embedded reporters and thoughtfully-prepared press releases enable population-centric warfare. They have seen the rise (and fall) of the most famous American general since Eisenhower, and how his careful cultivation of reporters helped to achieve both bureaucratic and battlefield success in getting the 2007 surge approved and in gaining local support for it on the ground in Iraq.

In my own experience travelling with two different Chairmen of the Joint Chiefs of Staff, the conventional wisdom in the office was that a trip without reporters was wasted travel.

At the most senior levels, general officers have come to see media engagement—not just through official outlets—as essential to their work. Many of them have embraced social media, presumably because they see value in communicating directly with the public that trusts them more than its elected representatives in Congress. Again, the Vietnam-era “lesson” that talking to the public can only get you relieved, jailed, or misquoted has been replaced by an, if anything, overly optimistic perception that most challenges can be fixed (or at least reduced) by a correctly-designed Information Operations plan with associated talking points for the press. In my own experience travelling with two different Chairmen of the Joint Chiefs of Staff, the conventional wisdom in the office was that a trip without reporters was wasted travel. Nowadays, nearly all travel made by any senior military leader is meticulously documented online for the press.

All of those factors have encouraged a healthy respect for the media among at least the senior ranks of the military profession. And yet, the military has its challenges in maintaining a professional ethic that keeps the relationship whole. Just this month, The Atlantic published an article full of anonymous sources identified as recently retired general officers. Roundly critical of the President, it begs the question of what these officers hoped to gain by it that they were unwilling to say openly while they were still on active duty. Catharsis? Further interviews?

It would clearly be inappropriate, even treasonable, to criticize the Commander in Chief publicly while on active duty. He or she has the Constitutional authority to give orders and expect them to be followed forthrightly by military officers who abide by the carefully-cultivated norm of non-partisanship.  As soon as military professionals view their loyalty to a particular party ideology as dominant over or equivalent to their loyalty to defend the nation, they risk losing their professional independence to politicians concerned with coup-prevention.  That the idea of a military takeover of the US government is so far-fetched is a testament to the power and ubiquity of the apolitical norm.

But high-ranking military retirees are problematic. Certainly there is no legal prohibition on retiree speech, but when they use their retired rank to gain credibility, they put the profession of arms on a slippery slope. On the one hand retired officers may be well equipped to provide accurate context (“the military view”) on a given national security issue—although current and relevant knowledge has a short half life in the world of national security and defense. To the extent that they do that effectively, the media, the military, and the public all benefit. But to the extent that retirees purport to speak for the military (which they necessarily do, at least implicitly, when they are introduced by their retired rank), they hamstring current practitioners, who bear all the responsibility of providing military advice to and executing the orders of civilian leaders. At a minimum, vocal retirees undermine the trust that civilian leaders have in the candor of military advisors: will this person really “well and faithfully” execute the orders that I give them, or will they wait to retire and then unload on me to the nearest reporter willing to grant anonymity? Or perhaps they won’t even wait that long, but call a retiree-buddy to deliver their dissent to CNN tomorrow morning! Can I even trust the advice they’re giving me, or should I first confirm which party they voted for?

The idea that a President would concern him or herself with partisan identity in selecting flag officers is anathema to military professionals. And yet, the military creates a perception of partisan favor or affiliation in numerous ways, as when Fox News seems to be the only authorized TV station playing on the monitors in military offices, medical clinics or military airports, as is frequently (although not exclusively) the case. Further, such practices can encourage military populations to question the trustworthiness of particular media outlets (the derisively-termed “mainstream media,” or worse, the “lamestream media”). Favoritism for a particular news organization or partisan slant on a broad scale risks resurrecting the mistrust between the military and the media that characterized the post-Vietnam-era.

One of the less-obvious hazards  to effective media-military relations is the simple fact of the military’s longstanding popularity among the public as the most trusted of public institutions. The risk in this case is two-sided: that the media may over-trust military opinions at the expense of objective independent criticism, and that service members become so comfortable with that trust that they assume their perspective should be appreciated over all others. At the point where the prestige of the military (both in the press’s eyes and in its own) is so great that it brooks no argument, the relationship has tilted dangerously. Society is then under-served by both parties. The innate skepticism of the press corps makes this phenomenon unlikely, but hagiographies still happen, and they are threatening to both professions.

The free press and a nonpartisan military have become necessary elements of a mature liberal democracy.  It is incumbent on each, then, to vigorously defend the distinctive professional norms that contribute to their efficacy.  The ability to understand others’ perspectives is integral to reporters’ identities; they comprehend context and tell engaging stories.  Military officers, too, need to broaden their understanding of the media’s professional ethos so that both institutions can continue to serve effectually as foundations of democracy.