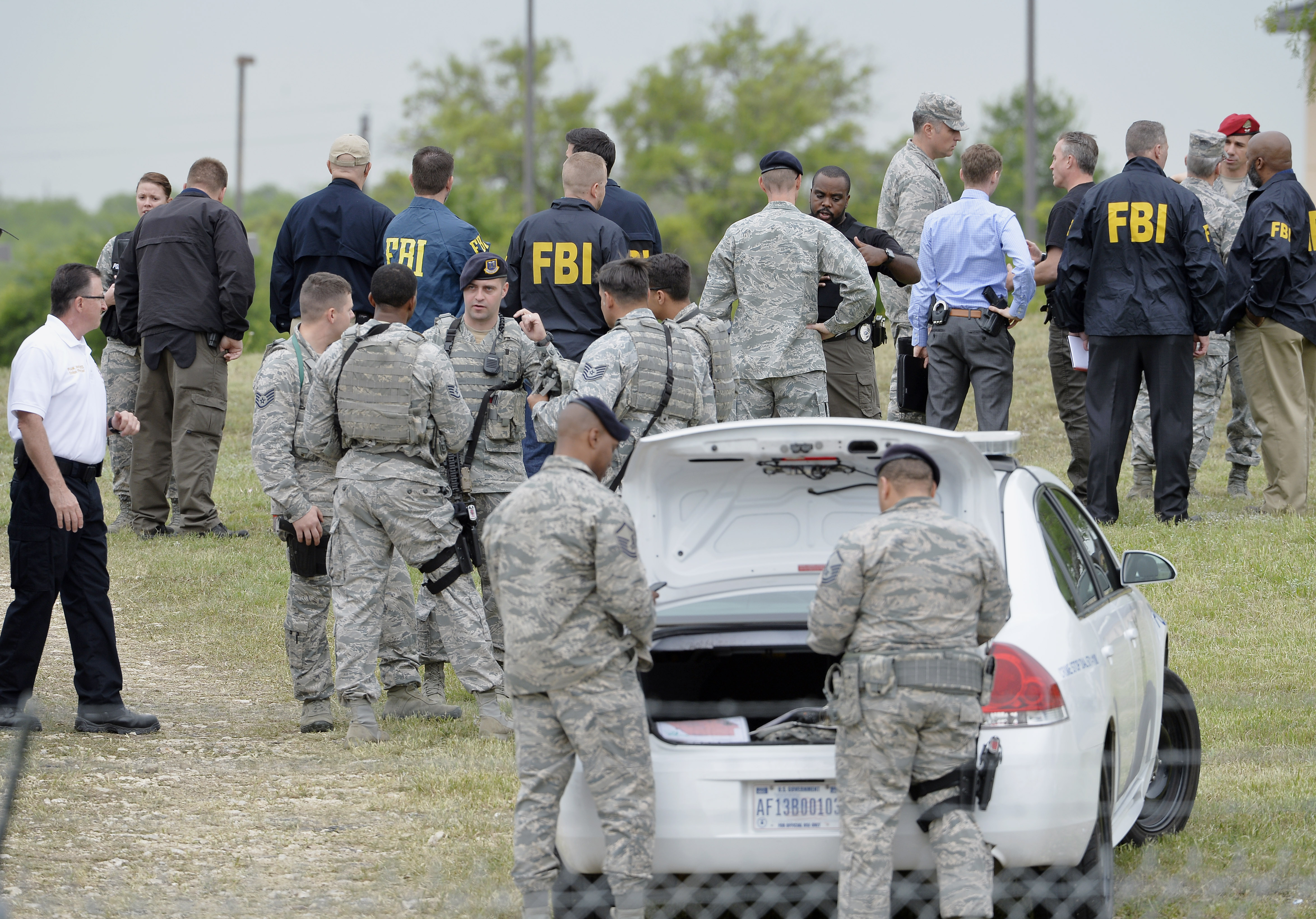 Employing the military to supplement civil law enforcement can be risky.

Consider the following vignette. A mobilized National Guard squad patrols the U.S.-Mexico border when they encounter a group of taunting teenage boys across the chain-link fence. Tension escalates, and one of the Mexican nationals begins climbing the fence to taunt the soldiers more. As the boy approaches the top, a squad member reverts to his Iraq deployment training on protecting a base. Determining that the boy is a threat, the soldier shoots him, believing this is in accordance with the right to self-defense. The M9’s bullet tumbles in the boy’s body before exiting and entering another Mexican in the group. One week later, members of the Mexican-American border community stage protests in response to what they call a “war-crime” and racism. The protests spread, forcing U.S. national leaders to make a difficult choice – (1) maintain the military presence, causing tensions to escalate, or (2) pull the military, tantamount to admitting defeat.

Employing the military to supplement civil law enforcement can be risky. Law enforcement and the armed forces are distinct security organs with different roles, rules, and training. Despite this, the two are often used jointly, and the line between them is not always clear. When the armed forces take on a law enforcement role, especially in a domestic setting, it is important to remember that the military does not have the same training and experience as police, and should be kept to a support and logistical role that reinforces law enforcement officers but does not supplant them. This allows armed forces to contribute to overall capabilities while minimizing the risk that friction will occur between civilians and servicemen.

In early April 2018, Secretary of Defense James Mattis requested that up to 4,000 National Guard troops deploy to the U.S.-Mexico border to lend support to the Department of Homeland Security. The official release states that those deployed are not to interact with any encountered immigrants without the approval of the Secretary of Defense. It also instructs members of the military not to perform law enforcement duties; their weapons, and therefore their capacity for the use of force, are restricted to self-defense only. Why is this? What is the point of such constraints?

To understand the value and risk of using the military in circumstances like the recent border security operation, it is useful to consider the history of using armed forces for law enforcement operations – that is, situations such as riot or protest control on domestic territory that would normally be managed by law enforcement. The infamous Boston Massacre involved the use of armed forces in policing a disturbance that was somewhat domestic, at least in the sense that the colonies were part of the British Empire. The 1886 Wisconsin labor strike and the 1914 Ludlow Massacre both paint similar pictures. In 1992, the National Guard response to the LA riots highlighted a lack of adequate training and impaired readiness for such an operation. Finally, on May 4th, 1970, the Ohio State Guard opened fire on students at Kent State, causing what would be known infamously as the Kent State Massacre.

Such incidents are not restricted to the United States. Bloody Sunday and a slew of seemingly-constant events that occur in Jerusalem, along with many other events which cannot be listed in this piece, all show a pattern; using armed forces for law enforcement or peace-keeping operations in domestic or pseudo-domestic territories has occasionally resulted in  lethal missteps rooted in the gap between armed forces and police.

A key cause for this may lie in the differences in training between servicemen (combatants) and law enforcement officers (LEO’s), as well as their general purpose in hostile situations. LEO’s are  public servants to a community; they should “serve and protect.” While this sometimes involves use of force, even of lethal force, this should always be used as a last resort due to the environment that an LEO operates in. In the LEO’s environment, all individuals are members of the community to which they should not needlessly harm; very few individuals will be enemies who are targets for elimination. In fact, the legal standard for use of force by police is “objectively reasonable” and is usually referenced from a defensive point of view. Even those individuals who are designated as enemies are still citizens, usually, and therefore have the rights afforded to citizens. This standard is not always upheld, as is evident by the history of police abuses (including notable cases like Rodney King, Laquan McDonald, and Jon Burge), but it is still the general role of a public servant and, very significantly, the standard against which they are measured in the public mind.

Military combatants operate in a different environment with a different purpose. Theirs is not necessarily to protect individuals around them, but to accomplish the mission. The individuals that they encounter in a foreign zone are not entitled to the rights and protections of an American citizen, or even of an alien on U.S. soil, but are limited to International Humanitarian Law and Human Rights Law. Moreover, the use of force can be more open and available to combatants than to LEO’s. While an LEO is obliged to begin with an attempt at a constitutional arrest and escalate to force as necessary, a combatant may strike an enemy first and resort to lesser measures, like arrest, as the situation requires. This, of course, is subject to change by the Rules of Engagement (ROE) given to the combatants so long as it remains within the boundaries of International Law.

The blurring of the line between combatants and [law enforcement officers] in manning a mission can result in the use of practices that are unsuitable for the law enforcement environment.

Counter-insurgency (COIN) operations, which have many similarities with law enforcement, are notably difficult for militaries. While armed forces display symbols and wear uniforms, insurgents are often known to buck this and blend into the civilian population. This causes severe problems for combatants who cannot immediately identify an enemy from a civilian, sometimes resulting in paranoia and distrust towards the civilian population. This is similar to an LEO’s environment, where threats and enemies often have the same appearance and are found in the same location as civilians Furthermore, COIN requires not only combat operations, but also a high degree of interaction with the local community, building community security and stability, reinforcing political legitimacy, and even providing an outright temporary policing force if needed; all of which are in the LEO’s traditional domain.

Issues such as the significance of collateral damage draw a line between armed forces and law enforcement. In a hostage situation for LEO’s, ensuring the safety of the hostages is a primary goal. Combatants, however, must only adhere to the principle of Proportionality, as dictated by International Humanitarian Law. This principle puts primacy on the military aspect of the mission, and simply requires that there be additional recognition of the civilian harm factor. Rather than stating that the civilians must be protected at all times, as is the common LEO mentality, Proportionality only states that there may be no operation  in which the civilian damage is in excess of the military advantage gained; the damage to civilians must be proportional to the benefit to the military.

An indicator of this difference is in the rate of civilian casualties produced by U.S. police and by the U.S. military. Coalition airstrikes alone in Iraq and Syria between the years 2014 and 2017 are estimated to have killed between 800 and 5,800 civilians. Comparatively, all police departments in the US killed a total of 1,147 individuals in the year 2017; of which only 360 were not armed with a “Gun” or “Knife/Sharp Object” at the time of their death.

Consider a hypothetical hostage situation in which a terror group has taken over a woman’s apartment and are using her as a hostage. LEO’s are obliged to attempt to ensure her safety. However, in an armed forces situation, the decision to destroy the whole room, with the woman inside, is permissible. That decision may not be chosen, but it is potentially legal. This example has a real-world analogue in the previously mentioned 1992 LA riots. In a hostage situation in which law enforcement officers and U.S. Marines made a joint response, an officer, readying to enter the building, shouted “cover me” to a Marine. The officer meant that the Marine should observe vigilantly and be prepared to provide cover fire if needed, however the Marine understood the order to mean immediately provide covering fire, resulting in an estimated 200 rounds shot into the room holding the hostage. Fortunately the hostage was not harmed.

There are technical differences between combatants and LEO’s as well. International Humanitarian Law dictates that the use of hollow-point rounds constitutes a war crime. Combatants must, usually, use full metal jacket rounds which do not break up in the body and instead may leave the first body and potentially enter another. This is contrary to LEO’s who have been using hollow-point ammunition for years; NYPD began in 1998 and LAPD in 1988. A hollow-point round used by LEO’s is intended to enter the target’s body and stay there, reducing the risk that it will exit the body and hit a bystander. An unknowing armed forces commander may not be aware of this new standard, and continue the use of the full metal jacket round; increasing the risk of collateral damage. This logistical misstep could result in serious consequences in a domestic environment populated by citizens.

The blurring of the line between combatants and LEO’s in manning a mission can result in the use of practices that unsuitable for the law enforcement environment. Soldiers may not necessarily be fit to operate in a domestic setting. The involvement of the U.S. Armed Forces in an international border incident would invite accusations of an act of aggression as well as potential, yet not well-founded, accusations of the loosest definition of an International Armed Conflict, pitfalls to which incidents involving civilian law enforcement are not subject to in the same degree. It would also do so at a particularly poor time. The Presidential Election in Mexico is a key opportunity to improve U.S.-Mexico relations; however, negative incidents would tarnish this opportunity. Newly elected President Lopez Obrador may have already alluded to the mobilization when he stated during his campaign, “It’s not with walls or use of force that you resolve social problems.” Furthermore, condemnations may come from traditional allies who are already taking a critical view of American leaders’ diplomatic strength due to the U.S. departures from the Trans-Pacific Partnership, Paris Agreement, and Joint Comprehensive Plan of Action against Iran’s nuclear program.

Using troops in supporting roles, as this mobilization does, allows the DoD to support the U.S. Border Patrol without greatly increasing the potential for damage. Mobilized combatants should be kept in roles which do not involve law enforcement or interaction with migrants. However, these limits must remain within the mission as it progresses, and temptation to use Guardsmen as supplement LEO’s to boost law enforcement capability or arrests should be resisted. If combatants end up in law enforcement situations in this mission or in future ones, there will inherently be the potential for major incidents and subsequent consequences.

Joseph Hope is an independent researcher based in East Asia and focuses on security and terrorism in the region. The views expressed in this article are those of the author and do not necessarily reflect those of the U.S. Army War College, U.S. Army, or Department of Defense.