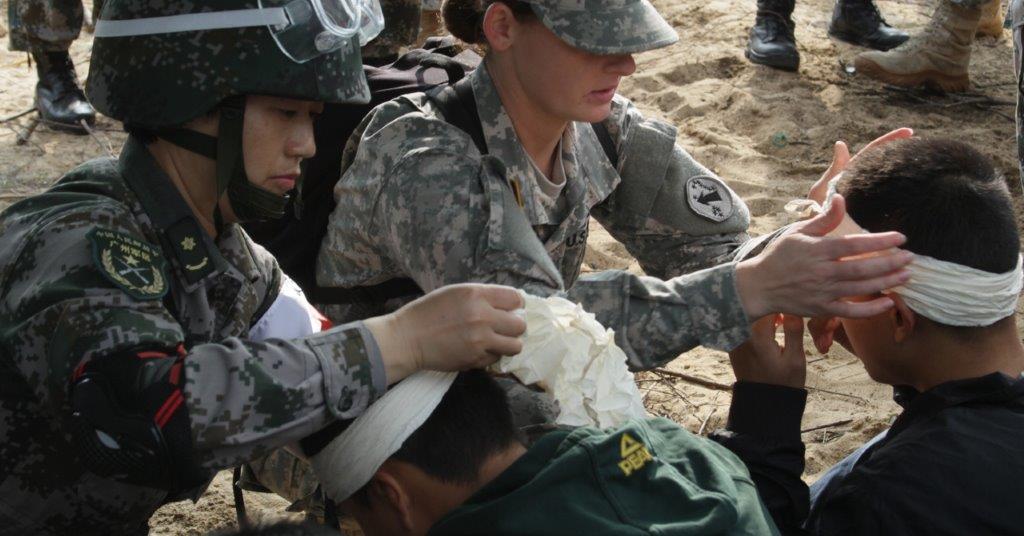 It is not hard to conceive various scenarios in which the U.S. and Chinese militaries would have to conduct combined operations

History is replete with alliances among nations who were otherwise competitive with each other. For example, World War II brought together the U.S., Britain, France, and the Soviet Union against Nazi Germany. Today, strategic competition between the U.S. and China offers similar constraints against ordinary military-to-military cooperation.

However, it is not hard to conceive various scenarios in which the U.S. and Chinese militaries would have to conduct combined operations. One example is a humanitarian event on the scale of the January 2019 tsunami that impacted Indonesia’s Sunda Strait, caused by an eruption from the volcano Anak Krakatau. The death toll from this tragedy already stands at several hundred, with officials fearing a rise in the near future. Keeping this in mind, along with the fact that thousands of individuals are currently displaced from their homes, it is without a doubt that this tragedy will require international humanitarian efforts in order to rebuild and stabilize the region.

As such events are not uncommon in the Asia-Pacific region, one can expect that a similar crisis could occur in a location where U.S. and Chinese interests are equally strong, and military-to-military cooperation a necessity. How could this work? On the U.S. side, one way would be through the U.S. Army Special Operations Forces (ARSOF), who are uniquely postured to work with other militaries and non-military organizations. In addition to addressing the crisis, successful ARSOF engagement could also open dialogue for future partnerships, build relationships, and strengthen peacekeeping capacity in the region, including potentially with China.

The Case for U.S.-Chinese Cooperation

There are many in the United States that would call joint interoperability between the U.S. and China to be harmful to national security, with experts such as Harvard professor Graham Allison describing the U.S. as no longer seeing China as a “strategic partner, but a strategic adversary.” However, some believe that China must be viewed as a strategic partner first, especially in light of America and China’s many mutual entanglements on the economic, social, and political fronts.

It is no secret that the U.S. and Chinese currently compete for influence throughout the world, affecting developing regions such as Latin America, Africa, and Asia. However, the focus of this essay is to demonstrate that the benefits of cooperation outweigh the negatives. Many American communities would benefit from such an arrangement, to include the military and political leaders, with the humanitarian aspect of joint cooperation having relatively few drawbacks when compared to other types of joint military cooperation.

On the political level, the benefit of such an arrangement of cooperation would also allow for the U.S. to demonstrate its ability to partner successfully with the Chinese, paving the way for international dialogue for future partnerships to avert such crisis. All in all, a bilaterally-led humanitarian effort could only bring value to helping nations such as Indonesia recover from such a tragedy, and any negative consequences of such an effort can and must be placed aside for the greater good in this specific instance.

Speaking from a military perspective, the Chinese military, and specifically, Chinese SOF, are currently one of the few large armed forces that have not been truly battle-tested, with many other countries being able to participate in the vast array of conflicts within the past two decades, with heavy emphasis on the Middle East and Africa regions. Cooperation between U.S. and Chinese SOF would enable American military forces to better understand the intricacies of operations and readiness levels of Chinese SOF, and being able to evaluate those capabilities during a dynamic environment would provide a higher intelligence value than when compared to a relatively static training scenario.

These reasons are just some of many justifications for why ARSOF would be the best solution and partner for such cooperation efforts. With a mission steeped in unconventional warfare and a very robust expertise in working with partner nations, ARSOF has the ability to successfully carry out joint missions, trainings, and exercises without compromise to national security.

The United States military has a very unique role to play within the field of geopolitics. However, while the military is often utilized as the “stick” in the “stick and carrot” approach in diplomacy, the nature of ARSOF enables it to be both of these items in this analogy, boasting flexible initial response efforts, ease in establishing a strong support base, and finally, an ability to provide future help to large-scale disasters on the scale of the Anak Krakatau volcano eruption.

A strong initial movement in support of such a mission might include the immediate deployment of life-saving equipment and material to the specific disaster location, with joint interoperability allowing for the fast deployment of such resources to an area. One example would be the 2015 Nepalese earthquake, which saw the establishment of Joint Task Force 505 from the U.S.-side, and a variety of different teams to include a Government Medical Team from China. The specialized environment of SOF also counts resources such as logisticians, transportation, and movement personnel within itself, and such a task and a re-focusing of efforts from both sides would have hypothetically allowed for the more rapid deployment of heavy equipment such as tractors and cranes to Nepal, with Chinese trucks and resources being able to bring reliable U.S. equipment in-country to assist with relief efforts.

Additionally, the establishment of a strong support base with proper procedures and skills is also critical in the weeks after a natural disaster. This type of support is typically all-encompassing of a variety of social, disaster, and other services focused on rebuilding the affected community. With such a large knowledge base, with personnel specializing in engineering, medical, administrative, and communications skills, ARSOF is again the best asset for such efforts, with most of these skills being able to be taught in a period of just a few weeks.

Lastly, having the ability to provide future help is also particularly key to ensuring a return to normalcy for those affected by potential disasters. This is another area where SOF thrives: Subject-Matter Expert Exchanges (SMEEs), in addition to a variety of other mission sets conducted by ARSOF, are where such an organization can showcase its strengths. These types of exchanges could involve anything from ensuring a working base of medical knowledge for a working populace, to basic building and sewage construction techniques taught by Special Forces Engineer Sergeants.

both U.S. Army and Chinese military forces have worked together successfully in the past

All in all, ARSOF is the best-suited tool to help establish and build joint humanitarian and disaster relief operations throughout the world. The dynamic skillset and abilities of SOF personnel make them ideal candidates to help foreign partners recover from disasters, with a large breadth of skills from fluency in local languages, to AOR-specific location knowledge, and finally, to an ability to teach and train local populations to better establish themselves and their communities for future success.

Some may scoff at the thought of sending SOF personnel to support humanitarian missions, maintaining that such work be relegated to traditional support agencies such as the International Red Cross or the United Nations. However, the ability of ARSOF providing assistance in light of disasters is not a new concept, with a primary example being the 2015 Nepal earthquake. Immediately after the earthquake, the United States quickly established Joint Task Force 505, comprising of military and civilian Army, Navy, Air Force, and Marine Corps forces, bringing much-needed emergency relief supplies, casualty evacuation capabilities, and movement coordination to the region.

In this specific action, ARSOF played a huge role in supporting humanitarian efforts in a boots-on-the-ground capability. ARSOF already deployed in the area were immediately called to action for their specific skills sets and expertise following the earthquake, contributing invaluable mass-casualty coordination know-how, communications capabilities, and even structural coordination in order to allow for the delivery of relief supplies in the area.

The bottom line is that ARSOF has been utilized as a tool for providing humanitarian relief before, and should continue to do so in the future, provided the opportunity to do so.

Joint Cooperation: Not as Foreign as You Think

The establishment of such a joint operation would most importantly enable victims like the Indonesians to have more expedient access to much-needed emergency relief supplies, better access to advanced medical professionals, and allow for increased coordination in relation to rebuilding efforts. In fact, both U.S. Army and Chinese military forces have worked together successfully in the past, with the first joint military-to-military exercise in the continental United States between both nations being held in Joint Base Lewis-McChord in 2015, specifically focusing on humanitarian relief efforts. Further use of ARSOF in this environment would also be particularly beneficial; the dynamic multi-faceted capabilities of an ARSOF soldier provide a variety of skillsets contained in a relatively low-profile package, minimizing potential impact to foreign policy initiatives and mandates.

The U.S and China have been on very shaky terms as of late, primarily due to intense political rhetoric from both sides resulting in conflicts such as the ongoing U.S.-Sino trade war. This, along with other controversial topics such as involvement in the South China Sea and Taiwan (to name a few), mean that both the U.S. and China view each other with suspicion.

However, disasters such as the Anak Krakatau eruption and the 2015 Nepal earthquake provide unique opportunities for good. Presenting both powers with opportunities to find common ground and cooperation when mutual interests are at stake. This is especially important should the distant future present a need for U.S. and Chinese military forces to cooperate on a larger scale against a common foe, much the way the Allies did in World War II.