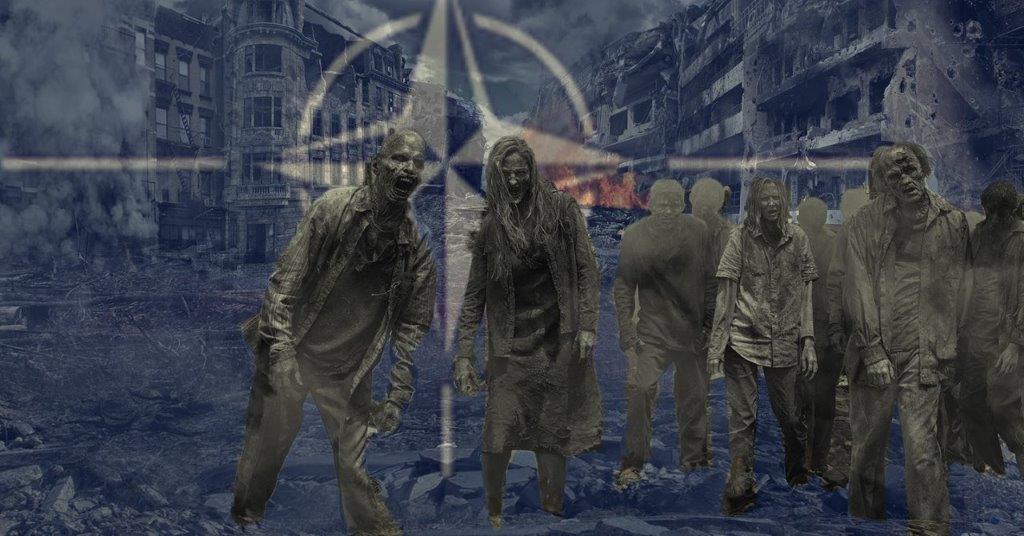 one could argue that NATO [is] a rambling, destructive creature carrying on in the body of its former self

Last year, WAR ROOM celebrated the 70th anniversary of the Treaty of Brussels, the founding agreement of what would become the European Union. This year there are three important anniversaries to review: The first is the 10th anniversary of the movie Zombieland, released in 2009 and one of the top earning zombie films of all time. That same year, Daniel Drezner published his highly celebrated book, the Theory of International Politics and Zombies. This year is also the 70th anniversary of the Washington Treaty, which created an alliance that – to some critics – has outlived its purpose and, like a zombie, just will not die: the North Atlantic Treaty Organization. While I understand the appeal of this argument, it gets something fundamentally wrong. NATO remains vital because the international security environment still demands the cooperation of free and liberal nations against the forces of oppression and chaos. NATO is not the zombie problem; it is a protection against the zombie problem.

Zombies have been a part of the horror menagerie for a long time, but with Danny Boyle’s unforgettable 28 Days Later (yes, I know it’s not technically a zombie movie), the remake of Dawn of the Dead, and the brilliant horror comedy Shaun of the Dead, the early 2000’s saw a massive “zombie-fication” of popular culture. (Heck, WAR ROOM even ran a popular Halloween Whiteboard about “zombie generals.”) Perhaps more than any other movie or television series, AMC’s the Walking Dead has capitalized on the surging appeal of the flesh-eating undead.

What makes a zombie a zombie? I will avoid exciting the rage of the internet by suggesting that there is any authoritative answer to that question. That said, zombies generally have three characteristics. First, in spite of their wretched state, zombies retain the bodies of their former selves. Even if they threaten us, we may be reluctant to kill them – indeed, the moral conflict of a character hesitating to kill a zombified friend or family member is a staple of the zombie genre. Second, zombies like to proliferate; they roam the earth looking to infect other people. If there is anything worse than one zombie, it’s 29 of them. Finally, zombies lack life as we know it. Each staggers on until killed by destroying or removing its head. At this point, you may be wondering what zombies have to do with NATO? Briefly, one could argue that NATO shares these basic zombie characteristics: a rambling, destructive creature carrying on in the body of its former self, aimlessly roaming the earth infecting others, removing their ability to choose for themselves, lifeless and undead.

NATO arose from the despair and destruction of Europe after WWII. Following that war, an “iron curtain” fell across the continent. In February 1948, the Communist party of Czechoslovakia, aided by the Soviet Union, overthrew the former’s government. Later that year, communist uprisings in Greece and Soviet pressure on Turkey led the United States to instigate the Truman Doctrine, to contain Soviet expansion. In response to communist threats, the North Atlantic Treaty Organization came to life April 4, 1949. According to NATO, “the primary aim of the Treaty was to create a pact of mutual assistance to counter the risk that the Soviet Union would seek to extend its control of Eastern Europe to other parts of the continent.” The United States was head of the NATO alliance.

During NATO’s first decade, its members focused on reconciliation between former combatants and rebuilding the major European economies. NATO admitted its first new members, Greece and Turkey, in 1952, 30 years after the end of the Greco-Turkish war. Building upon the success of the European Coal and Steel Community (ECSC), NATO promoted harmony between France and Germany, while at the same time bolstering Europe’s defense. This demanded [then-West] Germany’s rearmament. By 1955, NATO allies allowed it to join them in their alliance, to shelter under its security umbrella. Together, they could cooperate and rebuild their economies. This remained NATO’s raison d’etre until the end of the Cold War.

After the Soviet Union’s fall in 1991, NATO stayed on its feet, focusing itself on three new lines of effort: new partners, new members, and new missions. In 1994, it created the Partnership for Peace (PfP) program to promote bilateral cooperation between the alliance and non-member states. Beyond the PfP program’s military benefits, such as increased interoperability, it spread democratic values and stability outside of NATO. The alliance also expanded, first to 19 members in 1999 (adding Czechoslovakia, Hungary, and Poland), and again in 2004, to 26 members (including Bulgaria, Estonia, Latvia, Lithuania, Slovakia, Slovenia, and Romania).

The call for NATO to go “out of area or out of business” breathed new life into the alliance, which undertook peacekeeping missions, first in Bosnia, and later in Kosovo. By 1999, it had added two new core tasks to its mandate: cooperative security and crisis management. After the 9-11 terrorist attacks on the United States, NATO enacted its core collective defense clause first time in the alliance’s history, invoking Article 5 of the treaty (“an attack against one is an attack against all”). From 2003-2014, NATO members supported U.S. operations in Afghanistan under the International Security Assistance Force (ISAF). While some have disparaged the limitations of NATO members, all alliance members (and many partners besides) contributed to the mission, freeing up U.S. forces to focus on combat operations there and in Iraq.

Zombie alliance – a shell of its former self?

Today, some scholars and politicians (including the U.S. President) have revived the argument that the NATO alliance has become obsolete. The United States has frequently lamented European nations’ underinvestment in their military capabilities. Numerous U.S. administrations have lambasted NATO members for their failure to meet the goal of military expenditures meeting 2% of their GDPs. In spite of pressure from President Trump, only 7 of 29 NATO members met the 2% goal in 2018. At the same time, some advocates are calling for even more expenditures to deter Russia. This only encourages NATO allies to free ride on the United States for their security. Like zombies, complacent NATO allies seem to be feeding off the lifeblood of the living (Uncle Sam and his military).

Since 1949, the NATO alliance has expanded from 12 to 29 member states with the addition of Montenegro in 2017. Some argue this enlargement, instead of strengthening the alliance, has only increased the risk of conflict. For example, the U.S. president suggested that an ally such as Montenegro could drag the U.S. into war. Russia also finds NATO enlargement provocative. Allies’ demands for a more robust NATO presence in the Baltics, an area that may be indefensible, risks unnecessarily provoking Russia and creating a security dilemma where events could accidentally escalate into major conflict. Enlargement hasn’t lived up to its ideal of turning former Warsaw Pact members into model democracies either: two members of the class of 1999 have taken illiberal turns of late.

Only by destroying the head?

In another disturbing development, our European allies seem to be moving away from U.S. leadership. Some key administration officials see European support for the Joint Comprehensive Plan of Action (JCPOA) to thwart Iranian nuclear ambitions, as a challenge to U.S. leadership. Others express suspicion over European ambitions for greater strategic autonomy suggesting Europeans seek more than strengthening the European pillar of NATO. The European Union (EU) laid out its ambitions for developing strategic autonomy in its 2016 European Global Strategy. European Union efforts to strengthen their strategic autonomy, if taken too far, could hurt NATO’s force generation process and undermine U.S. leadership of the alliance. At the same time as Europe seeks greater autonomy, U.S. leaders seem to be tiring of the burdens of military leadership in Europe.

The Opposing View: NATO has plenty of life left

In spite of these misgivings, there is still a lot of life remaining in the Atlantic Alliance. While the United States will continue to press its allies to increase their defense expenditures, one may question the very definition of security contributions, such as the arbitrary nature of the 2% measure. In any case, allied defense expenditures have risen for four years in a row and are expected to increase by $100 billion over the next two years. In addition, a majority of NATO members are expected reach the 2% level of defense spending by 2024. In perhaps a better measure of burden-sharing, America’s allies and partners in NATO continue to play a significant role to play in a promoting and safeguarding. U.S. interests worldwide.

Far from being a shell of its former self, NATO magnifies the U.S. comparative advantage versus its competitors: China and Russia. The continued Russian military buildup and seizure of Ukrainian ships and sailors entering the Sea of Azov, demonstrates the continuing relevance of NATO. Russia seeks to undermine democratic institutions and fray links between the EU, NATO and the “lands in between” Western Europe and Russia. As an organization, NATO provides a mechanism to resist these efforts and to enable a collective response to deter further Russian aggression. NATO’s core tasks remain as relevant as ever: collective defense, cooperative security and crisis management

NATO has recently demonstrated renewed commitment to collective military readiness. In 2018, the alliance conducted a massive exercise, Trident Juncture 2018, which included some 50,000 troops, 250 aircraft and 65 ships, to demonstrate NATO’s capability to live up to its Article 5, collective defense commitments.

NATO’s crisis management operations also help support U.S. interests across the globe. At the height of its ISAF mission (which ended in 2014), the alliance had over 130,000 soldiers from “50 NATO and partner nations.” While those numbers have been drastically reduced, NATO members and partners remain in Afghanistan under the Resolute Support Mission (RSM) some 16 years on. In addition, about 4,000 NATO soldiers remain in the Kosovo Force (KFOR), maintaining stability there since 1999.

NATO still has an important role to play in providing cooperative security in Europe and across the globe. Since 1994, the Alliance has developed a “network of partnerships with non-member countries from the Euro-Atlantic…Mediterranean…[and] Gulf region[s], and [with] other partners across the globe.” In addition to improving interoperability with alliance forces, these partnership programs promote democratic values and give the United States and its allies an unparalleled network of partners from Austria to New Zealand.

Overall, NATO has provided a great deal of stability even though it failed to completely deliver on the expansion of democratic values. By focusing on consolidating its gains and limiting NATO enlargement, especially in Russia’s near abroad, the alliance can still promote its values, while being sensitive to Russia’s concerns born out of fear, honor, and national interests. While the alliance still needs a robust military presence in Europe, it doesn’t need to chase phantom threats, or unnecessarily provoke a declining, but dangerous Russia. Concerns that new allies could drag the United States unwillingly into a conflict represent a fundamental misunderstanding of the alliance.

NATO remains alive and well because it remains relevant to U.S. interests and those of its allies. According to Ambassador Nicholas Burns and retired Lieutenant General Douglas Lute, at the Harvard Kennedy School’s Belfer Center, NATO remains “the single most important contributor to security, stability, and peace in Europe and North America.” In spite of its challenges, NATO continues to promote values and stability to members and partners that span the globe. And, as the Secretary General of NATO stated in his 2019 trip to the Pentagon, U.S. leadership remains the key for NATO. As many of the 70th anniversary articles point out, this is no time for NATO to become complacent or rest upon its laurels.

NATO is a long way from being a zombie alliance. So as NATO celebrates its 70th anniversary, as in Shaun of the Dead, let’s just “go to the Winchester, have a nice cold pint.”