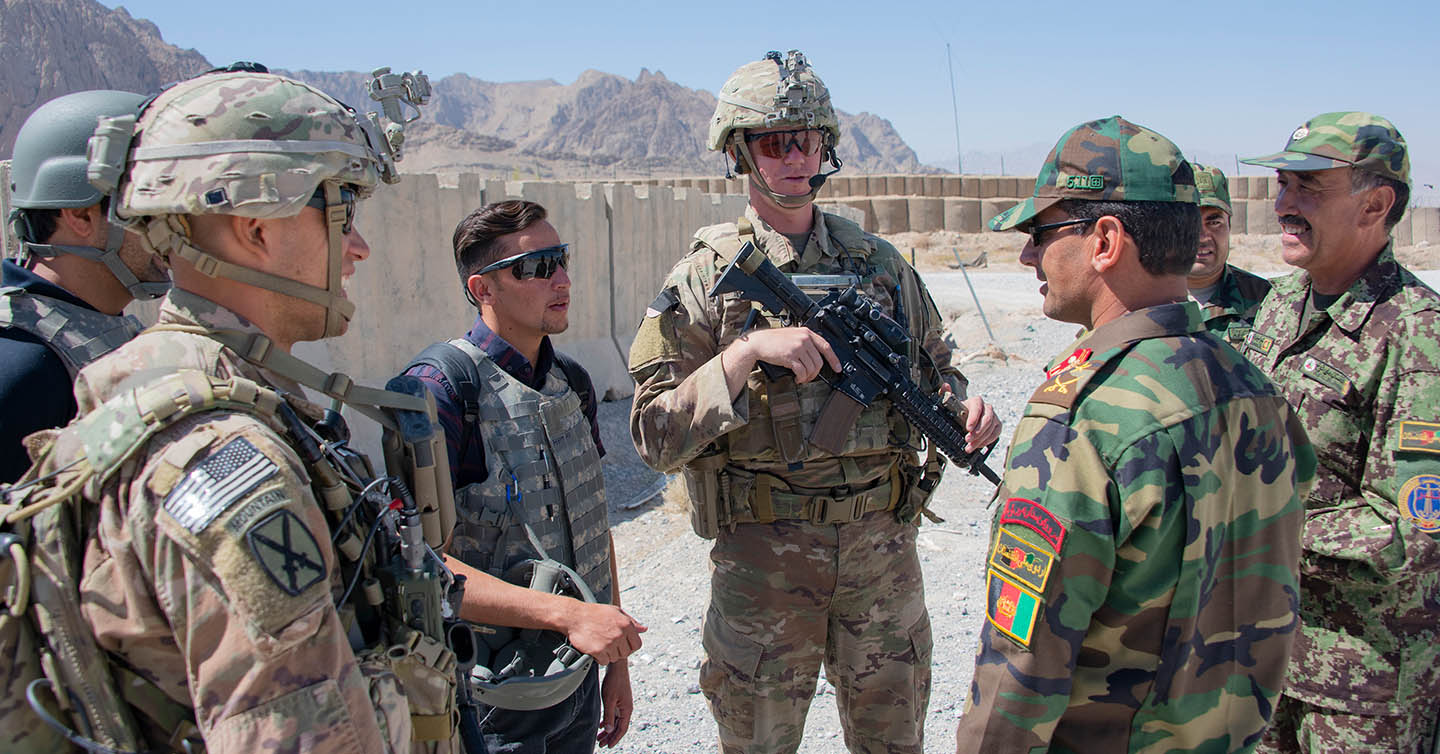 Editor’s Note: In February 2019, the Institute for the Study of War and Strategy (ISWS) of the University of St. Andrews and the U.S. Army Strategic Studies Institute (SSI) brought together eleven scholars, each representing the view of a different country or in one instance the institutional apparatus of NATO, to discuss “Lessons Learned from Afghanistan.” In the spirit of the St. Andrews conference, War Room presents a series of reflections inspired by the conference from attendees (Martijn Kitzen, the author of the following essay, was also a panelist) from three different countries.

The conference began with a keynote address by General (Retired) David Petraeus, in which he warned that “you cannot just throw away counterinsurgency lessons and act if you are in the Cold War.” Yet this casting away of lessons is exactly what I have been witnessing in my own country, the Netherlands, as well as within NATO in general.

This essay will argue that historically the ability of Western armed forces to learn from irregular warfare experiences has been hampered by the cultural underpinning on which those militaries are founded. Petraeus urged in his address that Western militaries must overcome this tendency if they are to cope with the complex hybrid threats posed by both state and non-state adversaries. It is time to get rid of the unhelpful, dichotomous conceptual framework that presents conventional and unconventional – or regular and irregular – war as antipodal opposites. Instead, we should develop an approach that will enable us to quickly adapt to a specific situation in order to fight in a way that best matches whatever form of warfare is adopted by our enemies.

Why we fail to learn

While history never repeats itself literally, patterns can be discerned in the past. One such pattern observed throughout military history is the recurring rise and then fall from favor of counterinsurgency within military institutions. Western military forces are principally optimized to fight against similar adversaries, and therefore have to reorient themselves whenever confronted with elusive insurgent opponents.

This adaptation process, however, is hampered by the dominant Western military culture that emphasizes the defeat of an enemy through a decisive battle in which massive firepower, technology, and maneuvering by large formations are key to victory. Counterinsurgency only gains momentum when soldiers realize that this conventional, enemy-centric approach is insufficient against an opponent hiding amongst the population and employing a cunning combination of guerilla, terrorism, and political subversion. As this realization of the need for something new reaches its peak, the military will then typically implement a so-called population-centric approach, the combination of military, political, and socio-economic efforts to gain popular support for the government and deny it to the insurgents. After the end of such a campaign (and often regardless of the outcome), however, armed forces then quickly return to business as usual. Thereby, lessons from the experience are often forgotten before they are properly captured and understood.

As Sir Hew Strachan (one of the organizers of the St. Andrews conference) notes in The Direction of War: Contemporary Strategy in Historical Perspective, one of the best-known examples of this recurring cycle is the U.S. military’s troubled adaptation to counterinsurgency during the Vietnam War and the neglect of those experiences in its aftermath. This forgetting left the U.S. military ill-prepared to counter the insurgencies in Iraq and Afghanistan.

Yet, the pattern is much older. It can also be observed during the height of European colonialism in the nineteenth century. Despite the fact that colonial armies spent most of their time fighting irregular opponents amongst indigenous populations, their doctrine, training, and organization were designed for defending overseas territories against the armed forces of other nations. In the Dutch East Indies, for example, a remarkable pattern of colonial campaigning evolved, in which the Dutch colonial army would typically first launch conventional operations in order to conquer and pacify an area. It would only adopt a more tailored approach when escalating series of these large-scale operations failed to deliver results.

As the contemporary Dutch colonial officer A. Struivenberg noted in a study [in Dutch] of operations during the Aceh War of 1873-1904, “The failure to recognize that the outcomes of European [conventional] warfare cannot be directly transferred to the fight against the indigenous enemy with his very specific character, [led the Dutch colonial army] to give great credit to the use of massive fire.” Thus, it seems that Western military forces are doomed to reinvent the wheel every time they are confronted with insurgencies, despite their extensive — if often forgotten — historical record of operations against such irregular enemies.

Why we should start learning now

The latest period of counterinsurgency has ended and Western militaries are once again moving towards the downside of the cycle. In the wake of the troubled campaigns in Iraq and Afghanistan, the political will to put boots on the ground to confront insurgencies in faraway countries is severely diminished, while Western armed forces are focusing on conventional warfare. The Netherlands’ Royal Army, for instance, has almost completely reoriented towards interstate combat. Consequently, its training program is exclusively aimed at bolstering its performance in maneuver warfare involving large-scale units.

For this purpose, even veterans from the Cold War-era have been rehired in order to teach a younger generation the tricks of what they consider “proper warfare.” In this climate, the army’s attempt to learn from its recent experiences in Afghanistan has stalled, even though its contribution to the ISAF mission in Uruzgan province (2006-2010) was by far the largest deployment of the modern Dutch armed forces. A similar pattern can be observed in other NATO member countries, as well as within NATO structures.

Military thinkers … have repeatedly warned that counterinsurgency might not currently be the preferred approach, but that it will nonetheless be necessary in the future

Of course, the reemergence of the Russian threat to some extent justifies this reorientation. Yet the contemporary security situation is complex and requires a broader approach than simply mimicking Cold War strategy. In modern warfare, the lines between regular, conventional and irregular, unconventional warfare are increasingly blurred. This so-called hybrid warfare is embraced by states and non-state actors alike, as seen in Russia’s use of irregular tactics to destabilize its neighbors. Meanwhile, non-state actors, such as the Islamic State, have demonstrated their capability to launch conventional operations.

In The Utility of Force, the retired British general Rupert Smith explained the non-linear character of modern war with his concept of “war amongst the people.” Smith not only notes that “there is no secluded battlefield upon which armies engage” in isolation of civilians, but that indeed “civilians are the targets, objectives to be won, as much as an opposing force.” Therefore, even a temporary farewell to counterinsurgency is far from appropriate in this security environment characterized by hybrid — both state and non-state — threats and in which engagement of effected populations is key to success. Western military forces should be capable of adopting the approach necessary for a specific context, opponent, and time, whether employing a mixture of conventional or unconventional means.

Thus, it is essential that we stop thinking of conventional and unconventional warfare as a dichotomy. Instead, we should start considering these forms of warfare as complementary and making up a continuum to be deployed against highly capable hybrid threats.

The nature of war, however, is not the only determinant of military thought. Other factors also play a role, such as each country’s strategic circumstances, historical experiences, intellectual and cultural climate, and general Zeitgeist. As mentioned earlier, current strategic thinking tends to disregard the counterinsurgency experiences of Iraq and Afghanistan. There is little political will to again embark on such a costly and uncertain adventure, while senior military commanders, most of whose formative years as young officers were spent during the latter period of the Cold War, are increasingly regarding the recent counterinsurgency era as a “wrong turn” from the core business of high-end conventional warfare. Furthermore, the 2008 economic crisis has severely affected military spending in the United States and, to an even greater extent, European countries. Austerity has functioned as a catalyst for forgetting, as militaries have prioritized preserving conventional capabilities above all else. Thus, despite the readily apparent non-linear nature of modern warfare, the confluence of these other influences suggests an inevitable neglect of counterinsurgency by Western militaries.

Yet the stubborn hybrid character of modern war is a reason to row against this tide. Military thinkers like David Kilcullen and David Ucko have repeatedly warned that counterinsurgency might not currently be the preferred approach, but that it will nonetheless be necessary in the future as “any sensible enemy will choose to fight us in this manner.” Moreover, as expeditionary land forces will inevitably operate among foreign populations, there is a broad, obvious relevance to maintain the ability to interacting with the people in non-Western societies.

Therefore, the lessons of the recent counterinsurgency campaigns in Iraq and Afghanistan should be properly captured, understood, and learned. This is a sine qua non for bolstering Western militaries’ abilities to perform both conventional and unconventional missions in order to counter the hybrid threats that dominate the contemporary international security environment.

In case you missed it, be sure to read the earlier reflection of Gunhild Gjørv. Later this year, ISWS and SSI will produce a conference report incorporating the contributions of all presenters.

Martijn Kitzen is Associate Professor of War Studies at the Netherlands Defence Academy. The views expressed in this article are those of the author and do not necessarily reflect those of the U.S. Army War College, U.S. Army, or U.S. Department of Defense nor do they reflect the official policy or position of the Dutch government or the Dutch Ministry of Defence.