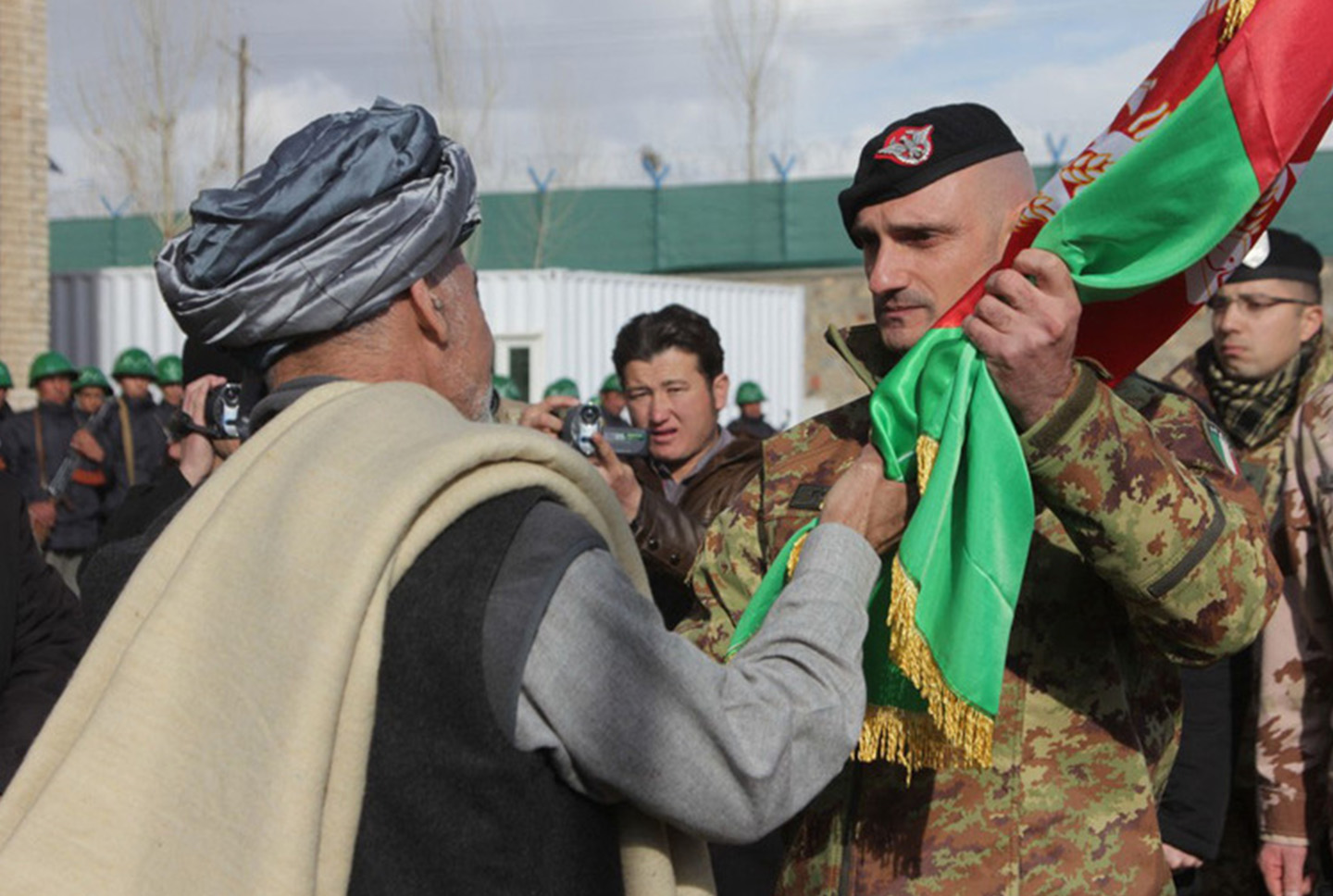 Conflicts, both in Afghanistan as well as at home, will continue to have both a complex civilian and military character

When the International Security Assistance Force (ISAF) finally closed shop in Afghanistan in 2014, many participating nations professed a weariness with complex, civil-military, out-of-area operations. These operations demanded close, often awkward, relationships of cooperation, co-existence, and confrontation between different civil and military actors, including local civilians. Amid the withdrawal, many militaries and their defense departments seemed to express a collective sigh of relief, talking about a ‘return’ to strictly military priorities and operations. The focus shifted to ‘near area’ operations and security concerns at home. However two related problems remain:

Conflicts, both in Afghanistan as well as at home, will continue to have both a complex civilian and military character. Understanding past, current and future civilian domains is more necessary than ever before.

Where to begin? ISAF, in combination with the US-led Operation Enduring Freedom (OEF), consisted of the combined intervening American forces with their NATO and non-NATO allies into Afghanistan after the attacks on the US World Trade Centre in 2001. Today, a smaller mission, focusing on security-related training and support, persists in Afghanistan with considerably fewer troops under Operation Resolute Support.

In many respects, it appears like the participating nations have all but forgotten Afghanistan. This is unfortunate as there are many lessons to still be identified and learned, much of which can be relevant for future operations. As such, the 2019 University of St. Andrews Conference on Lessons Learned in Afghanistan, held from 11-12 February, was a welcome initiative.

Though the conference was advertised as an opportunity to ‘take stock of NATO operations in Afghanistan’ with speakers invited to ‘present their respective state’s armed forces’ experience on the ground’, there was nevertheless a glaring lack of input from any Afghan and/or civilian representatives with whom these militaries cooperated. If there was a single lesson learned relatively early on, and one that was repeated with increasing frequency, was that there was no solely military solution to the conflict in Afghanistan.

ISAF attempted to operationalize a combined civil-military effort towards rebuilding the Afghan state after the quick removal of the Taliban government in 2001. These efforts ranged from such initiatives as Provincial Reconstruction Teams (PRTs) to counterinsurgency (COIN), all of which relied upon, and assumed compliance from, both militaries and diverse civilian actors. Although it made sense to include both civilian and military actors when literally rebuilding a country, implementation was another story. Despite there being no solely military solution, the military dominated the process due to their numbers and ability to use force. Responsibility for coordinating governance, justice, and services is the civilian domain, ideally of the host nation. But in Afghanistan, diverse national and international civilian actors contributed with their own individual practices and were often poorly coordinated. Militaries have an established chain of command and, despite the international complexity of different militaries, were in many respects easier to coordinate under the largely NATO umbrella. In an environment of significant insecurity, it is not surprising that considerable control was assumed by militaries. This meant that coordination among civilian and military actors was unbalanced and awkwardly planned.  Briefly stated: it was a mess.

The implementation of PRTs and the emergence of doctrinal concepts such as COIN acknowledged, understood and included civilian actors are important contributors to the conflict’s solution. Yet PRTs and COIN ultimately became overly militarized and ultimately produced the opposite effects. One problem with these approaches is clear in the misguided attempts to win the ‘hearts and minds’ of the Afghan people. It is not that the hearts and minds were unimportant, but too many military activities to gain said hearts and minds were based on weak assumptions. Quick impact projects (QIPs) often combined security and development aid in an attempt to garner support of local communities, in ways that were considered short-term, superficial, and often incorrectly planned due to a lack of development aid knowledge within militaries. Speakers at the St. Andrew’s Conference remarked how a significant part of the problem was the resistance of civilian actors to follow the military lead.

Unavoidable tensions arose with the civil-military landscape, not least when civilians did not want to cooperate/interact with militaries. Many civilians – either agencies or average people – were justified in their reticence. Some felt that they would be violently targeted if cooperating with militaries. Others were concerned about being used if they provided information to militaries, assumed to use this information towards violent ends. Cooperation is not the same as doing what the military says. Otherwise, it was often assumed that militaries were generally too incompetent to do what were considered “civilian” tasks.

Both civilian and military actors tend to focus on lessons emanating from their own niche contributions. There may be lessons learned that are particular to individual specialty areas, however, lessons learned from the engagement in Afghanistan as a whole becomes very difficult without understanding how the different contributions worked with, against, or impacted everyone else in the operating environment. As such, discussions that focus on what might be perceived as largely military concerns while minimalizing the relevance or impact of civilian presence or engagement may give the impression that militaries worked in a vacuum, or that civilians were at best something to be protected or at worst, obstacles to overcome.

Some of the core lessons learned that came out of the St. Andrews conference reflected a heavy concentration on military interests which seemed to have, in the end, little or nothing to do with Afghanistan itself. These included:

The latter two are particularly impacted by the nature of the complex operation and the reliance upon multiple and diverse actors. This nexus between civil and military is where much of the difficulty arose. This could be a powerful lesson learned for military actors, but a hard one.

Given the significant power and ability to use force that militaries have, the civilian domain can appear irrelevant to the end state. The impact of the civilian domain is more subtle but nevertheless decisive. Afghanistan, (and for that matter, Iraq), have demonstrated that civilians are crucial to outcomes. Civilian authorities such as governmental, non-governmental (NGOs) and international organisations (UNAMA World Bank, etc.) are all instrumental to the eventual political solution that must result. Composed not just of governments and diverse support agencies, the civilian domain also includes average people inhabiting the spaces where power is negotiated locally.

Given the significant power and ability to use force that militaries have, the civilian domain can appear irrelevant to the end state

Average civilians matter, as COIN and PRT doctrines made clear. Civilians are not inherently neutral and passive, but may act in various ways to further their own security. Tactics include attempting to appear neutral, avoidance (e.g., fleeing a conflict zone), and cooperating with armed actors at any given time, simultaneously provide self-protection for civilians as well as influence distribution of power in local arenas. Power emanates from these sources, depending on what local interests are and who has the power to guide or dictate them.

This was clear in Afghanistan when, for example, civilians frequently and strategically realigned allegiances according to who wielded power at a given time and who had best access to aid and other resources, reflecting their own security needs and interests. As such, civilian security needs did not always align with NATO or the Afghanistan government efforts. Civilian security needs are often difficult to identify and monitor. Equally difficult was understanding differing civilian capacities.  Indeed, where militaries assumed opportunities to promote, support, or catalyse civilian security needs and interests – such as trying to reach out to Afghan women through the use of Female Engagement Teams (FETs) – the challenges were often enormous and underestimated due to the complex restrictions many Afghan women face. Militaries, though playing an important role, need to improve on how to work within such spaces, where military action often must be limited or just be available at the ready, without acting at all.

Especially since the 1990s and the military engagements in the Balkans, militaries have tried to be cognizant of the civilian domain and increase civilian situational awareness. Functions such as NATO CIMIC (Civil-Military Cooperation) or the US Civil Affairs developed as, among other things, an intermediary and open information conduit between military and civilians. In Afghanistan the results were, at best, awkward and at worst, potentially damaging. These functions have long been considered subsidiary to operations and dead-ends for military careers. In some cases these positions have been designated to reservists who may have important skills for “civilian projects” but are not up to speed on the political relevance and sensitivity of the civilian domain, nor on military planning, strategy, and operations. The need for increased civilian situational awareness is still crucial. Given lessons learned about the civil-military landscape, not enough has been done to examine the ways in which these functions can be significantly improved or re-thought,, so that militaries are better equipped to understand civil-military spaces and adjust accordingly, from when military force is needed as security support to the civilian domain, to stepping out of the way when civilian actors are better placed to take action.

There was, and still is, no purely military solution to the conflict in Afghanistan. This is also the true for any other conflict in the future. While militaries play an important role in conflict, they are only tools to effect political goals. Part of the difficulty in the Afghanistan conflict is that nations sent too many military tools, and assigned them responsibilities for finding where civilian tools were better – re-building governance and services that were decimated or non-existent. This resulted in confusion as to who was responsible for what, or assumptions that the military actors, especially the US, needed to control everything.

Have these lessons been learned in practice? Given the present situation, one wonders. At the moment, Russia is intervening to provide a political solution while Washington is in talks with the Taliban. Meanwhile, the Afghan government–all this time supported by NATO and its allies–is standing by the sidelines. As Afghanistan demonstrates, perhaps one of its “lessons” is that it is not all about size, firepower or money. If it was, Afghanistan should be a success par excellence. The St. Andrew’s conference was very useful in this case, because it laid bare how difficult it is to learn and gather lessons about a complicated, neither solely military nor solely civilian, space. The battlefields are even less clear now, and solutions to conflicts lie even more so within the civilian domain. Militaries have to be knowledgeable and prepared in these contexts, not just for out-of-area operations like Afghanistan, but also for the complexities of near-area contexts targeting Europe and North America. As such, core lessons to learn, and to further apply, lie in improved understandings of civil-military relationships.

Special Note: This piece was inspired by the presentations at the 2019 University of St. Andrews Conference on Lessons Learned in Afghanistan, held from 11-12 February.

Gunhild Hoogensen Gjørv is Professor, Critical Peace and Conflict Studies at the Centre for Peace Studies, UiT the Arctic University of Norway. The views expressed in this article are those of the author and do not necessarily represent those of the U.S. Army War College, U.S. Army, or Department of Defense.

Photo: Inteqal – the Dari and Pashtu word for transition – is the process by which the lead responsibility for security in Afghanistan was gradually transitioned from the NATO-led International Security Assistance Force (ISAF) to the Afghan National Security Forces (ANSF). Launched in 2011, the transition process was completed by the end of 2014, when ISAF completed its mission.