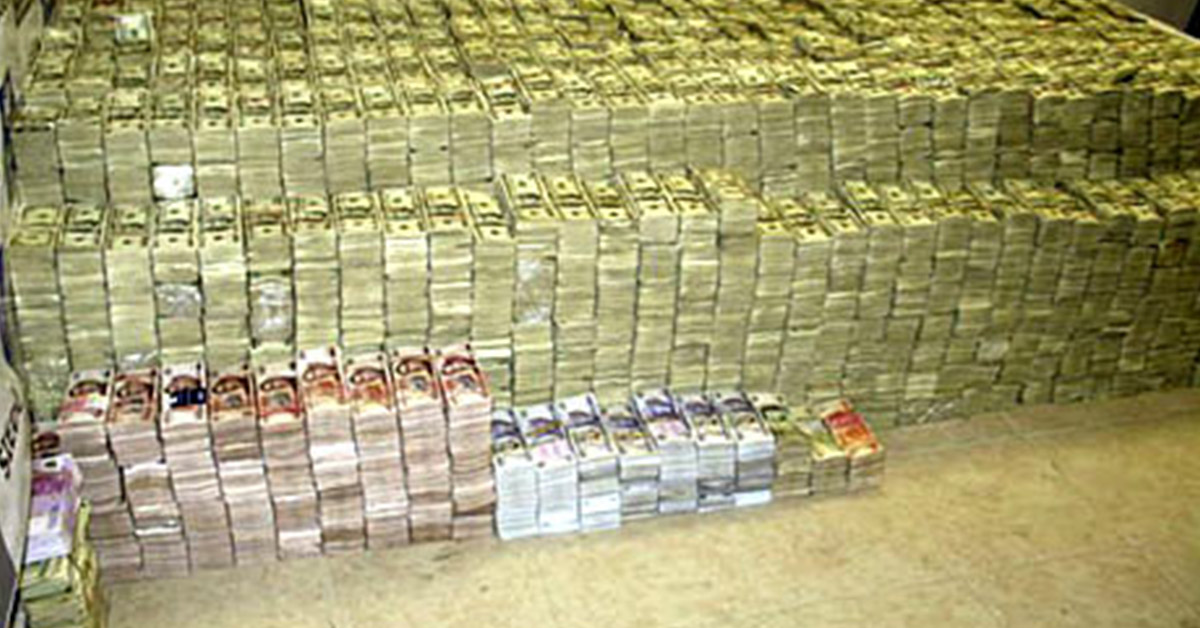 At a press conference in Pyonyang last year, U.S. Secretary of State Mike Pompeo responded to a North Korean negotiator’s claim that the U.S. demands during nuclear negotiations were “gangster-like.” Secretary Pompeo explained that the United States was merely requesting North Korean compliance with United Nations Security Council resolutions, and other international restrictions on the regime’s weapons program. He then closed by saying, “If those requests were gangster-like, then the world is a gangster.” Ironically, he uttered this phrase in one of the most notoriously criminal – but least understood — states in the world.

The common view among decision-makers and scholars is that states operating in the international system attain their foreign policy goals using government instruments of power—diplomacy, information, military, and economics (DIME). For many states that engage in illegal activity, however, crime is the DIME. Criminal states have infused their national instruments of power with an ethos that more closely resembles organized crime groups than typical nation-states. Their diplomatic corps, intelligence services, militaries, and economies are used in asymmetric ways, as criminal enterprises, to further national interests. Given their abilities to destabilize regions, undermine world order, and spark violent conflicts, criminal states such as North Korea and others merit greater study and need to be incorporated into theories of international relations (IR).

Criminal states—those countries that actively develop, coordinate, and pursue illegal activities as a matter of statecraft—are more than governments that simply misbehave in the international community. To be sure, many countries routinely run afoul of international law and guiding norms of international behavior: wars of aggression, human rights abuses, and trade violations are just a few ways states can fall short of global legal or normative standards. Criminal states, however, dedicate government resources to intentionally committing illicit acts, like drug trafficking, money laundering, financial fraud, counterfeiting, and hacking — to benefit their national interests. They are not just “mafia states,” where criminal activities are part of familiar patterns of political corruption at the expense of the public good, but rather, criminal states such as North Korea use illicit schemes to achieve foreign policy goals, such as increasing national prosperity, achieving geostrategic aspirations, and preserving the power of political elites, among other aims.

North Korea is not alone in using crime to advance its national interests. Russia relied on a Ukrainian gangster nicknamed “The Goblin” to organize a “home guard” that seized Crimea’s parliament building. Along with Russia’s “little green men,” The Goblin, whose real name is Sergey Aksynov, used his criminal syndicate to help midwife Crimea into the hands of the Russian Federation in 2014. Russia and North Korea are in the company of other criminal states like Iran and Venezuela.

A criminal state’s core goal for undertaking illicit schemes is often the preservation of the power and status of its ruling political elites, and because criminal states are undemocratic, such schemes thrive with impunity. By coopting organized criminal groups, political elites remove domestic challenges to their power and authority. In addition, organized criminal groups can be used to suppress dissidents and reward supporters. Regime preservation and “coup-proofing” form the bases for political-criminal connections at the domestic level, and they form the foundation for international actions that also have domestic political advantages for ruling elites — such as alleviating economic hardships brought about by sanctions and by reducing security challenges from rival states. Each criminal state has manipulated the relationships between the political and criminal classes in different ways.

North Korea nationalized its relationship with organized crime by dedicating Office #39 of the Korean Workers’ Party to illicit international activities. When Vladimir Putin came to power in Russia, he corporatized organized crime groups by setting firm guidelines for their interaction with the state, while using them to pursue national interests abroad. Iran and Venezuela have effectively revolutionized organized crime groups, using them to export the revolutionary ideologies of their respective regimes.

Criminal states often collude with one another, to perpetrate crimes that directly undermine the interests of the United States as a global hegemon. Venezuela has used its connections to the Andean drug trade to fund its cooperation with Iran and its proxy, Hezbollah. Such cooperation has, in turn, enabled Iran and Hezbollah to prop up the Assad regime in Syria. These states also often work in league with criminal organizations to thwart U.S. interests and to undermine the liberal world order. For example, to avoid international financial scrutiny, North Korea has reportedly dealt with the Russian mafia to help launder the Kim regime’s funds—with officials at the Russian embassy managing the process.

Despite all this, most current international relations scholarship overlooks such states. However, if studied, their practices could inform current IR theories. This, in turn, could help develop more useful theory that suggests possibilities for more robust policies and strategies to rein in such criminal states.

International relations as a discipline has its origins in the devastation of World War I. International relations sought real world answers to how and why such a profoundly shattering conflict occurred and how to prevent a recurrence. World War II, and the potential for a nuclear catastrophe during the Cold War, only heightened the search for theoretical foundations upon which to build a stable, peaceful, and prosperous world order. Today, however, factors such as the end of the Cold War, the 9/11 attacks, America’s wars in Afghanistan and Iraq, the aftermath of the Arab Spring, the rapid rise and spread of the Islamic State in Iraq and Syria (ISIS), and the weakening of European integration have all created new explanatory imperatives for theories of international relations. So too has the rise of criminal states.

The utility of any international relations theory is based on whether it can inform policy making by providing a context for the practice of statecraft and international politics. As international relations scholar Donald Puchala asked at the twilight of the Cold War, “[d]oes [a theory] give plausible meaning to events as they occur around us and perhaps as they have occurred in the past? Does it especially give new meaning to events that have confused us, or identify new events that have eluded us? Does it order, or at least suggest an order to our experiences?” A quick survey of traditional IR theories suggests a deficit when it comes to explaining criminal states.

Realism focuses on how states balance national power in an anarchical context. Conversely, liberalism emphasizes norms and shared interests and values, as instruments for shaping national policy, expressed or demonstrated in the context of international institutions. Constructivism asks theory builders and practitioners to define their terms, hone their arguments, and unpack their agendas. These theories of international relations have all served as useful intellectual roadmaps for policy makers and scholars confronting challenging global events and trends, but none charts a clear path for studying and contextualizing criminal states.

Conventional theories of realism and liberalism have not incorporated criminal states into their paradigms and the post-Cold War security environment, filled with non-state security threats, now challenges both realism and liberalism’s continuing relevancy, given their state-centric views of international relations. This makes overlooking criminal states by those two traditional IR theories even more curious. Criminal states are natural conceptual bridges between state-based theories of international behavior and those involving non-state actors, especially when criminal states have utilized violent non-state groups from the organized crime world to conduct foreign policy.

Given constructivism’s emphasis on how ideas and the material world shape one another, it would seem to be a natural fit for explaining how some states interact with the illicit portion of the global economy; however, it too has proven wanting in a discussion of criminal states. Instead, constructivism almost exclusively focuses on what scholars Martha Finnemore and Kathryn Sikkink call “good and nice norms such as human rights, environmental protection, climate change, [and] women’s rights” – ironically the norms that suffer most, when criminal states attack parts of the global order that undergird good governance and international stability.

Studying criminal states within international relations theory also requires more than what has encompassed darker conceptions of global patterns known as “deviant globalization,” and “durable disorder.” Rather than theories, these are terms which describe the contemporary international security environment. Deviant globalization refers to the illicit global economy, which comprises theft of intellectual property, distribution of bogus consumer goods, counterfeiting of currencies, trafficking in people and weapons, and corruption of public and private institutions, among many other illegal activities. North Korea, Russia, Iran, and Venezuela promote deviant globalization by undertaking many of these illegal enterprises. However, the concept of deviant globalization offers little in the way of a systematic explanation of criminal state behavior.

Deviant globalization is enmeshed with durable disorder. Proponents of durable disorder see instability in the international system as a given, instead of viewing it as an anomalous condition, one that can be corrected with better-crafted policies, or by being understood by using well-honed academic theories. To be sure, criminal states, and their desire to alter the regional and international status quo to their advantage, are powerful contributors to durable disorder. Nonetheless, durable disorder can only describe the effects of criminal states, rather than considering – as a theory might — how criminal states and the international order shape one another. In the same way, the liberal world order (such as it is) is not a theory; rather, it is a structure resulting from political choices that traditional theories try to explain.

None of this is to say that descriptive terms don’t matter. They do. To construct a theory for the dark underside of international relations that criminal states comprise, comprehensive descriptions of such states’ compositions and behaviors are helpful building blocks for understanding the components of Dark IR actors and processes.

All current theories of international relations contend with the largely normative behaviors of nation-states as key actors in world politics. Sovereign state power has been core to framing the international system. However, criminal state actors behave outside the frame, in non-normative ways, using alternative instruments of power that challenge traditional understanding. Identifying and labeling their components and behaviors is necessary to developing theories to explain them. For example, Kelly M. Greenhill identifies  “kleptocratic interdependence” as an important component for conceiving a criminal state. She describes kleptocratic interdependence as a self-reinforcing domestic and international relationship between criminal groups and government officials, which derives power and profit for criminals and politicians. Again however, while such classifications help identify the characteristics of states such as North Korea, Russia, Iran, and Venezuela, holistic models and theories of criminal state activity at both the domestic and international levels are still needed.

In an era where the U.S. national security establishment is concerned with “gray zone” wars, developing a theory of Dark IR is imperative for the long-term preservation of the U.S.’ position in the world.

The greatest challenge to developing a theory of Dark IR will be in gaining objective data on the illicit enterprises of criminal states. Unlike the more established theories of international relations, Dark IR must make invisible activities visible. Bringing clandestine activities to light will present methodological challenges. Researching transnational organized crime is difficult; it becomes much more difficult with the protection afforded by state sovereignty.

Dr. Paul Rexton Kan is Professor of National Security Studies at the US Army War College. He would like to thank Noah Reighard for his research and editing contributions in writing this article. The views expressed in this article are the author’s, and do not necessarily reflect those of the United States Army, the Department of Defense, or the U.S. Government.

Photo Credit: US Department of Justice photo of moneys seized in a 2007 raid.