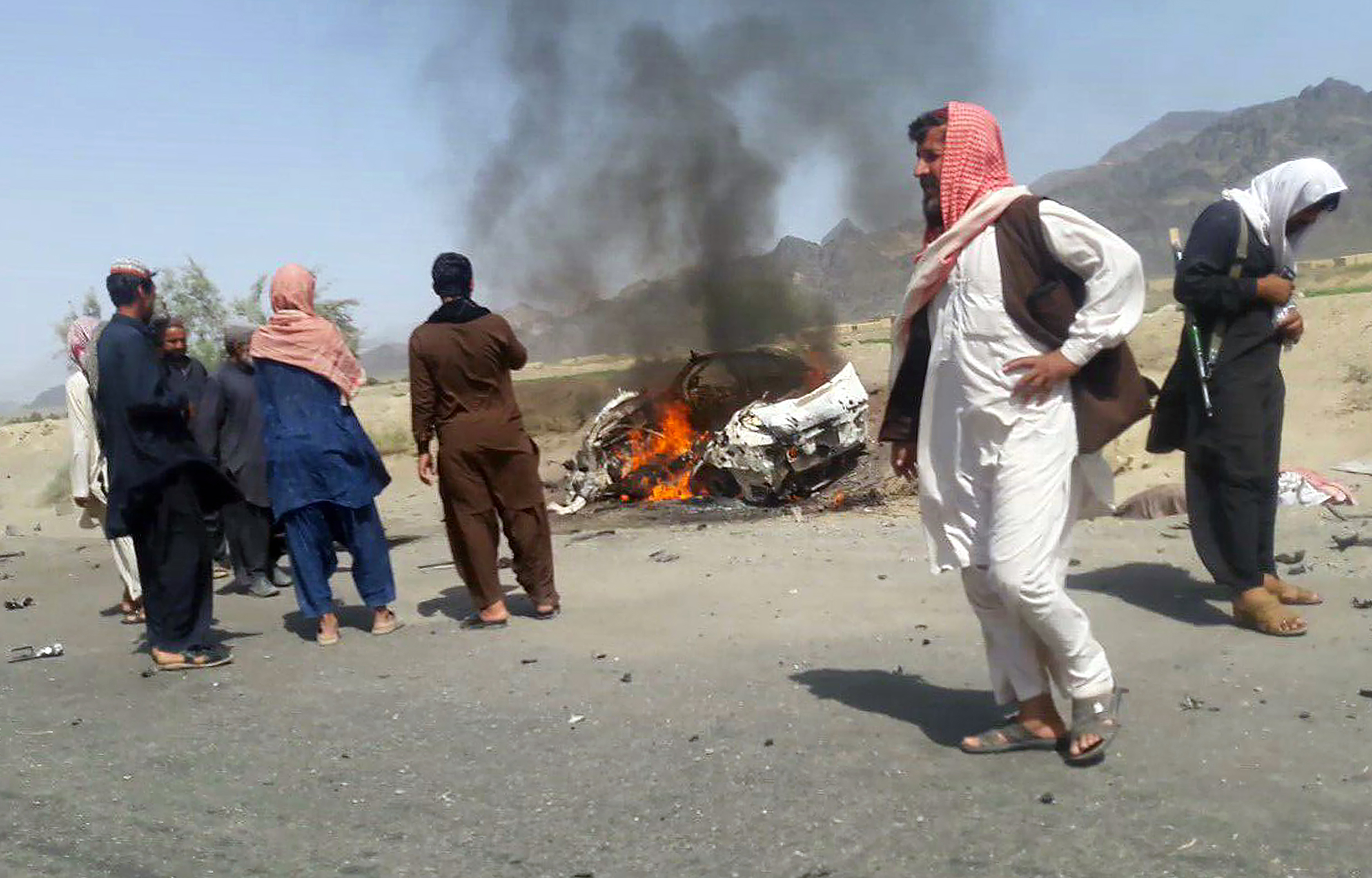 Drones are … muting proponents [of other elements of national power] through the perceived efficiency of a low risk military solution.

Drones are disrupting America’s approach to establishing and maintaining national security. Drones have been used to conduct hundreds of officially acknowledged strikes outside of combat zones, creating a market for combat options where none existed before. Two examples highlight this. Pakistan, a supposed partner of the U.S., has suffered over 400 strikes from U.S. drones, while President Obama has argued that drones are far more discriminating than conventional weapons, and therefore save more innocent lives than the alternative. The unanswered (or unasked) question is, would the strikes ever occur without this unique capability? Viewing drone technology as a disruptive innovation reveals its broader influence on national security policy and strategy. This is not just a disruption within the military. It extends to other elements of U.S. power, and without an adequate response, drones will continue to gain “market share” in the execution of American national security strategy, with potentially dire implications.

Disruptive Innovation (DI) Theory  describes shifts in the business environment whereby new entrants to a market displace previously dominant incumbents that built their success on incremental, sustaining innovations – think Wang word processors and personal computers, Polaroid and digital photography, or battleships and aircraft carriers. DI is a process by which a product or service takes root within a market and then relentlessly consumes it by changing the environment.

The development of submarines at the start of the 20th century, and the Royal Navy’s response to it offers a powerful historical example of a disruptive military innovation. Recognizing German U-Boats would be a threat to its navy, England developed effective anti-submarine capabilities prior to the outbreak of WWI, but within the context of a sustaining innovation. Viewing submarines as simply an evolution of the torpedo boat threat developed in the late 19th century, which were parried by torpedo boat destroyers (namesake of today’s destroyer class), England developed anti-submarine capability designed to protect its fleet of powerful dreadnoughts. When Germany unleashed submarines against merchant shipping, employing the capability outside a traditional clash of fleets, the disruptive innovation very nearly cost Great Britain the war.

The submarine example highlights how a DI can be difficult to recognize even when technological changes are readily apparent. The incumbent typically addresses the change in a sustaining innovation context – just as the British tried to fit submarines into conventional fleet operations.

In disruptive innovation, incumbents are overcome not only because they fail to recognize changes the new entry is making to the established order, but also because they see disruptions as non-threatening to their core markets. Disruptive innovations arise in one of two ways, by gaining a low-end foothold or a new-market foothold, and to incumbents they tend to appear (at least initially) unattractive, offering profits that are too low to justify additional investment because disruptive products are either only competitive at the low end of an existing market, or they offer insufficient volume in a new market. Submarines are an example of a new market disruption, in that they created a new way to achieve higher-level strategic objectives at sea, not by dominating it, but by denying an adversary access to maritime commerce.

Drones entered the national security market via the low-end entry avenue. Drones low-end entry path is obvious, compare the cost and specifications of Predator and Reaper drones, to the Air Force E-8 JSTARS or the Navy P-8 Poseiden intelligence, surveillance and reconnaissance (ISR) planes and drones fit the classic low-end entry category. Comparing the venerable Northrop-Grumman and Boeing companies to General Atomics (GA), maker of these flagships of the drone fleet, further validates this assertion; with GAs aviation division having only started in 1992 with a seven person team. GA focused on unmanned systems at a time when their limitations made them unsuitable competitors to the manned planes of the incumbent aircraft industry. GAs lack of aviation heritage freed them to make innovative breakthroughs that made drones competitive in the defense industry.

Drones speed, maneuverability and survivability (thus cost) pale in comparison to manned aircraft. These characteristics become much less important when the well-being of the pilot and crew is not tied to the aircraft. In DI terminology, the incumbent (traditional aviation industry) had improved the product beyond the needs of most customers who simply wanted data collected, or weapons on target. Currently, there is still a need for manned aircraft, but drones have taken many of those missions.

Killing your way to peace generally requires a lot of killing.

Once achieving their low-end foothold in the ISR arena, drone manufacturers began making entrées into other portions of the air power market by weaponizing these same ISR platforms. Arming drones allowed GA to compete in the high end market previously the exclusive domain of aircraft such as the Joint Strike Fighter and F-15 Strike Eagle.   In fact, in permissive airspace, armed drones became more suitable than traditional strike aircraft due to their ability to loiter over a target area.

Besides taking a chunk of the market from established aviation industries, GA and other non-traditional aircraft manufacturers are disrupting the pilot community. As conventional fighter squadrons covert to drones, the services are struggling to define what it means to be a pilot in the drone era, scrambling to maintain drone pilot standards, and trying to keep up with demand for more missions, all of which is hurting morale. The need for this capability is also creating critical pilot shortages.

As much progress as drones have made by taking the low-end of aviation of missions, their new-market foothold has greater potential for disrupting the U.S.’s approach to national security. Drones have in essence created a new market for military force, one that is competing with non-military (or non-violent military) options. By offering a responsive, low risk, kinetic option, drones are competing with less deterministic stability and capacity building means, which previously were more appealing than higher risk ground force or manned aircraft strike options. Drones have broadened the market for kinetic options, which the Pakistan operation demonstrates. Drones are therefore not merely capturing more of the market from manned aircraft missions; they are out-competing other elements of power, both military and non-military. One may be tempted to see all of this as a good thing. Yet although the expansion of precision strike has clear benefits at the mission level, its consequences for strategy more broadly are dire.

By itself, the expanded use of airstrikes is not disruptive, if they remain within the realm of combat operations and are not in lieu of other options. However, drones have taken on disruptive characteristics in the larger national security “market.” DI theory holds that once an innovation gains a market foothold, the incumbent cedes a portion of the market to it. This is playing out within the DoD and across other government agencies. Favoring the expediency of drone strikes to target the ringleaders of instability and terror, the military is now focused on high-end combat capability in lieu of stability missions that address the root causes of instability and translate military success into political victory. The Navy has disestablished its Maritime Civil Affairs Squadrons, and questions the efficacy of the hospital ship program, the Army decided to reduce and move all non-special operations civil affairs battalions into the reserve and guard components. The Marine Corps has retained its civil affairs capability, albeit within the reserve component. These decisions point to a DoD focused on facing near peer competitors on the field of battle, leaving drones as the tool to punish malign actors that foment instability. Even the Army’s new Security Force Assistance Brigade (SFAB) initiative is billed as a way to improve high end combat readiness. SFABs would free Brigade Combat Teams (BCTs) to focus on their primary mission. They would also act as a BCT in waiting with a staff structure able to rapidly absorb cadres and regenerate into a regular BCT. Outside the military departments, cuts to USAID, and State Department budgets have been proposed. This has been a gradual process but is coincident with the expansion of the drone fleet.

Recognizing this disruptive innovation is especially difficult since it is internal to the security establishment. Drones could be considered a DI insurgency, for the incumbent in this context is the national security establishment that should leverage all instruments of national power (diplomatic, information, military and economic, or DIME) to address security issues. Drones are disruptive in that they are now an outsized solution set within the institution, muting proponents in the D, I and E fields through the perceived efficiency of a low risk military solution. Drones are going to continue to become more capable, with ever-improving artificial intelligence and increased autonomy, and they will assume more and more national security decisions that they will consider based upon algorithms or fuzzy logic. As drone capabilities increase, they will assume more and more missions, continuing to replace both combat and non-combat elements of national power that were used to pursue security objectives without going to war. Drones threaten to further skew the U.S.’s response to security challenges toward a one dimensional fire and forget reaction. This is not good. Killing your way to peace generally requires a lot of killing, and such approaches are in accord with neither America’s values nor its aspirations to maintain global leadership.

There has been much debate over the use of drones, concerning their effectiveness, legality and ethical use, and General Petraeus recently observed, “you can’t just drone strike…your way out of [a] problem.” However, all of this debate has been through a sustaining innovation lens. When their disruptive influence is understood, drones’ impact on larger policy decisions becomes more apparent. Realizing this can prevent the false choice between launching a risky and destructive conventional strike and a presumably low risk precision drone strike, opening the aperture back up to consider other, or complementary solutions. We must be measured and balanced in how the U.S. addresses the myriad security challenges around the globe, and stem the erosion of stabilizing capabilities within the U.S. arsenal.

Finally, returning to the Royal Navy example, victory over the disruptive innovation of submarines did not require a new or profoundly innovative solution. Once a convoy program was instituted, vessel losses from submarines declined sharply. Astoundingly, convoys had been used to protect England’s merchant trade for centuries. But the admiralty’s belief that sea power now rested on the security of its extraordinarily expensive fleet of dreadnaughts, to the exclusion of all else, perilously delayed arriving at this rather simple solution, and cost the First Sea Lord his position.

Addressing the drone predicament is much the same. The nation’s security establishment certainly should leverage their unique capabilities, and the drone industry will naturally continue to offer products of better utility. But using capability should not supplant the other elements of national power that effectively deter adversaries, stabilize conflict affected states, and build resilience in fragile ones. However, to take advantage of these alternatives, the U.S. must retain and rehabilitate its capacity to compete in an environment where adversaries often operate below the level of armed conflict. This does not require profound technological innovation or intellectual frameworks. Looking at drones through a disruptive innovation lens will help keep national security policy a balanced mix of all elements of national power.

Photo: Pakistani local residents gathering around a destroyed vehicle hit by a drone strike in May 2016. Credit: -/AFP/Getty Images