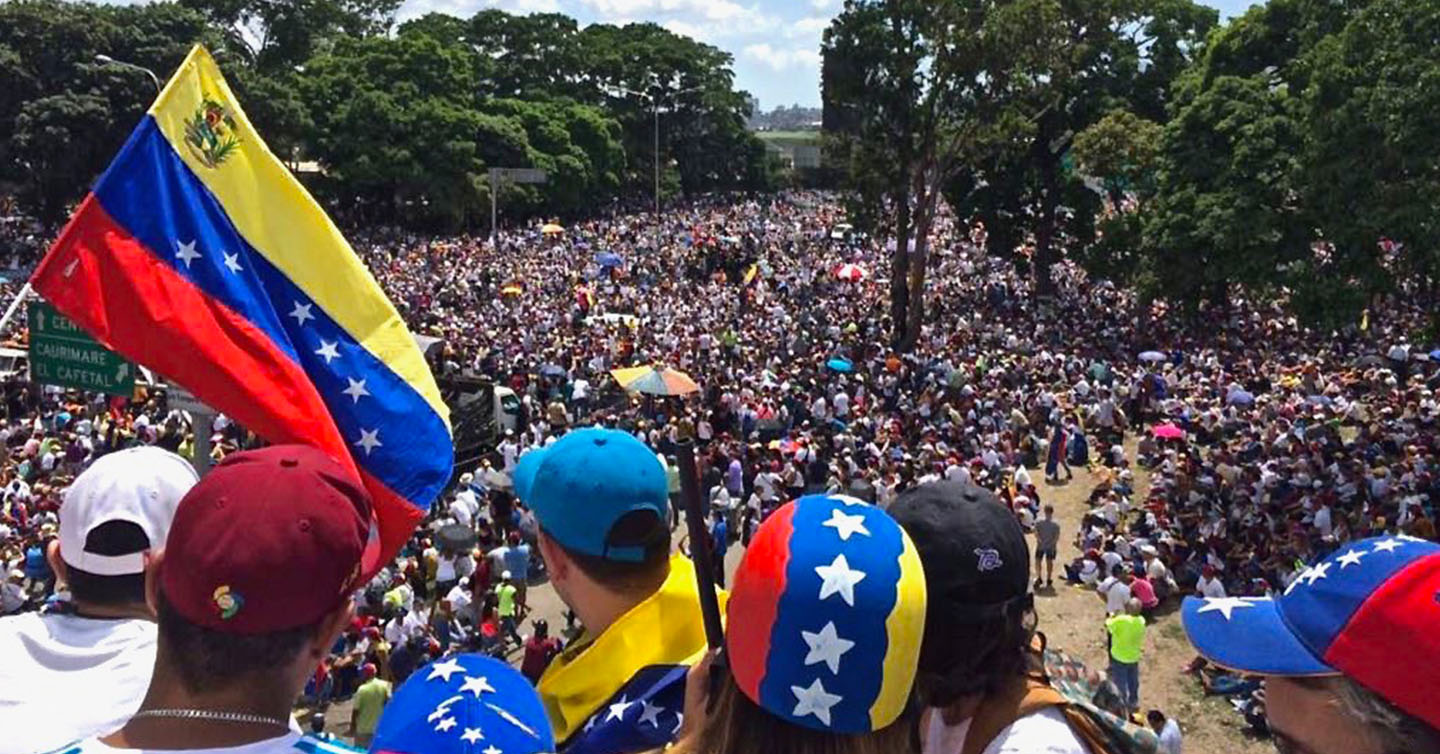 Observers figure that if the US, Mexico, or Brazil are unwilling to intervene in [Venezuela], they are presumably even less likely to care about dictatorships in countries with fewer resources

The extraconstitutional power grab may have domino effects for other caudillos who want to retain power on the continent, despite unhappy populaces.

The international community’s reaction to the early 2019 turmoil in Venezuela may have much farther-reaching effects than many pundits and policymakers are so far considering. Nicolas Maduro’s hanging onto power despite nearly worldwide condemnation will act as a cue to the rest of the region about how much the world really cares about “democracy” in the Americas. After all, observers figure that if the US, Mexico, or Brazil are unwilling to intervene in the country with the world’s largest oil reserves, they are presumably even less likely to care about dictatorships in countries with fewer resources. For the international community and the US in particular, that means even more potential instability in the backyard and more opportunities for China to exploit strongmen in need of cash. Two countries in particular are watching especially closely: Bolivia and Nicaragua.

Former Bolivian President Jorge “Tuto” Quiroga has not been shy in his support of Juan Guaidó, the head of Venezuela’s national assembly who in January challenged Maduro’s claim to authority. Quiroga and the rest of the Bolivian opposition allege that their president has been following Maduro’s lead and staging a “slow-motion coup.” Bolivia is scheduled to hold its next election in late 2019. But multiple opposition figures are expressing doubts that those elections will take place or, if they do, will  be truly democratic.

Since taking power in 2006, President Evo Morales has repeatedly manipulated Bolivian laws to stay in power. Morales promised in his first successful campaign to rewrite Bolivia’s constitution, which his Movement Toward Socialism (MAS) party did. MAS power over the rewrite was bolstered by a voting system that invited coordination between parties that guaranteed him a majority and maneuvers after-the-fact changing the rules to remove the necessity of a supermajority to make decisions. Morales was elected in 2009 under what the new constitution considered his first term and coasted to reelection, which is permitted only one time, in 2014. According to his own constitution, Morales should not be eligible to run for office in 2019.

But that’s not stopping him. Morales has jumped through hoops to try to run again: first holding a referendum to change the constitution term-limiting him, then alleging that term limits violate human rights, and finally getting the country’s electoral tribunal, which he has stacked in his favor, to deem his candidacy legal in December 2018.

My research shows that indigenous self-identification was, by far, the biggest predictor of support for Morales in 2014. (Specifically, self-declared indigenous persons were 125% more likely to vote for a left-leaning candidate and almost 60% less likely to express a preference for a right-leaning candidate in 2014.) Morales’ refusal to share power almost 15 years later is eroding his support even among indigenous voters. The erosion of indigenous support sets the stage for a tumultuous 2019.

As happened in Venezuela, opposition parties must first determine if they will participate in elections with Morales running again, as that would legitimate his candidacy, despite concerns about corruption, voter suppression, or Morales’ not respecting the results, as happened with the 2016 referendum. January’s party primaries were the first step in that decision. The opposition alleges that Morales’ confirmation as the MAS candidate for 2019 is his laying the groundwork for an argument that the people still want him to be in power. Therefore, some politicians asked their supporters to boycott in protest to keep too turnout low to be considered legitimate. Observers from the Organization of American States (OAS) noted the low turnout and high number of blank (protest) ballots. But the courts in Bolivia are treating the primaries as if they were handled appropriately, despite another round of protests in late February 2019.

All of this means that Bolivians are paying a lot of attention to what the OAS, the UN, and other countries say about Maduro in Venezuela. After all, the longer Maduro stays without outside entities taking action against him, the more secure Morales is likely to become that no one will react to his less-than-legal reelection. Separately, the OAS and others are more likely to pay attention to Venezuela than Bolivia, taking any heat off Morales. Finally, the world’s grumbling but inactive tolerance of Maduro gives Morales reason to believe the world would tolerate his staying in power after an election the opposition boycotts as well.

For industrialized democracies, democratic backsliding in Latin America should be important, lest the proverbially lawless Wild West come closer

In many ways, the timing of Guaidó’s actions could not have been better for Morales, whose popularity has been slowly declining. As of January 2019, Morales is less popular than former President Carlos Mesa, who is a candidate for 2019, but the opposition remains splintered, which has hurt it in past elections. With the situation in Venezuela, Morales has a test case he can exploit for the next eight months. The Bolivian opposition is counting on Guaidó’s assuming power quickly. Morales will keep his eye on Maduro and the OAS though. (Morales is, in fact, actively tweeting in support of Maduro and spreading conspiracy theories about the US’s undermining Venezuela, which also feeds into his Bolivian narrative about US hegemonic overreach.) Surrounded by “yes men” and seemingly still quite high on power, absent Maduro’s voluntarily stepping aside, the scenarios in which Morales accepts any election results that go against him are shrinking by the week.

At the other end of the electoral spectrum is Nicaragua’s Daniel Ortega, who is trying to complete his term to 2021, despite calls for early elections following months of ongoing protests that have left hundreds dead. Ortega’s government, like Maduro and Morales, is using the courts to quash opposition. Three protest leaders were sentenced to over 150 years in prison each in February 2019, far more than prosecutors requested and far more than Nicaraguan law allows one to stay in prison (30 years). Ortega relented in mid-February 2019 to talks with the opposition slated for 27 February. As of mid-March, the opposition remains firm that they will not agree to talks until after prisoners are released. Even were talks to resume, after failed talks last year, hopes aren’t high.

An OAS focus on Venezuela helps Ortega because it takes pressure off his regime to release persons the OAS and the Catholic Church have called political prisoners and which the opposition has stated as a first condition of any forthcoming negotiation. But the similarities with Bolivia end there. Whereas Maduro and Morales are trying to stay in power past their constitutionally-limited terms, Ortega is trying to complete his. So any OAS pronouncement that goes against Bolivia and Venezuela – i.e., that terms should be respected by those in power and the opposition – could be used by Ortega in his favor. Further, the seriousness of the situation in Venezuela, were new elections to be called there, could tie up OAS and other international resources and observers, making early Nicaraguan elections less feasible.

For oppositions in both countries, counting on exterior support is a dangerous call. The US has historically preferred stability over democracy in the region; and relations between the northern behemoth and southern smaller states in the region have not been great for decades. Research suggests Maduro was correct to be suspicious of US aid offers in January 2019. Gambling on – presumably – a Colombian- or Brazilian-led transition, with US support, seems risky for opposition figures in Bolivia and Nicaragua.

Interestingly, Bolivia and Nicaragua also look at China’s interest in the region differently. In February 2019, Morales’ government selected a Chinese firm to develop Bolivia’s extensive lithium deposits. As of February 2019, Ortega’s government is one of 17 worldwide that recognizes Taiwan, whose government extended a $100 million loan to Nicaragua that same month. Nicaragua’s government falling would further limit Taiwan’s options; and regional experts fear anyone after Ortega could be just as bad or worse. So, Taiwan is likely to continue to extend as much support as it can stretch to Ortega’s Nicaragua. For China though, having already increased its influence in the Western Hemisphere more than the Soviet Union arguably ever did, no matter who ends up in power in these countries, the Chinese already have Venezuela’s oil and, soon, Bolivia’s lithium. Morales’ wanting to hold onto power at any cost could play into China’s tendency to bribe resources out of weakening strongmen.

For industrialized democracies, democratic backsliding in Latin America should be important, lest the proverbially lawless Wild West come closer than it has arguably ever been. Bolivia is not Venezuela, but Morales does seem to be following Maduro’s playbook. For Ortega, after 2018’s violent clashes, he likely wants to avoid jailtime were the opposition to take power. For both Bolivia and Nicaragua, how the OAS and UN handle Maduro and Guaidó in Venezuela will likely have much more farther-reaching effects than many policymakers are yet considering.

Photo: Scene from the 2017 “We Are Millions” march in Caracas, Venezuela.