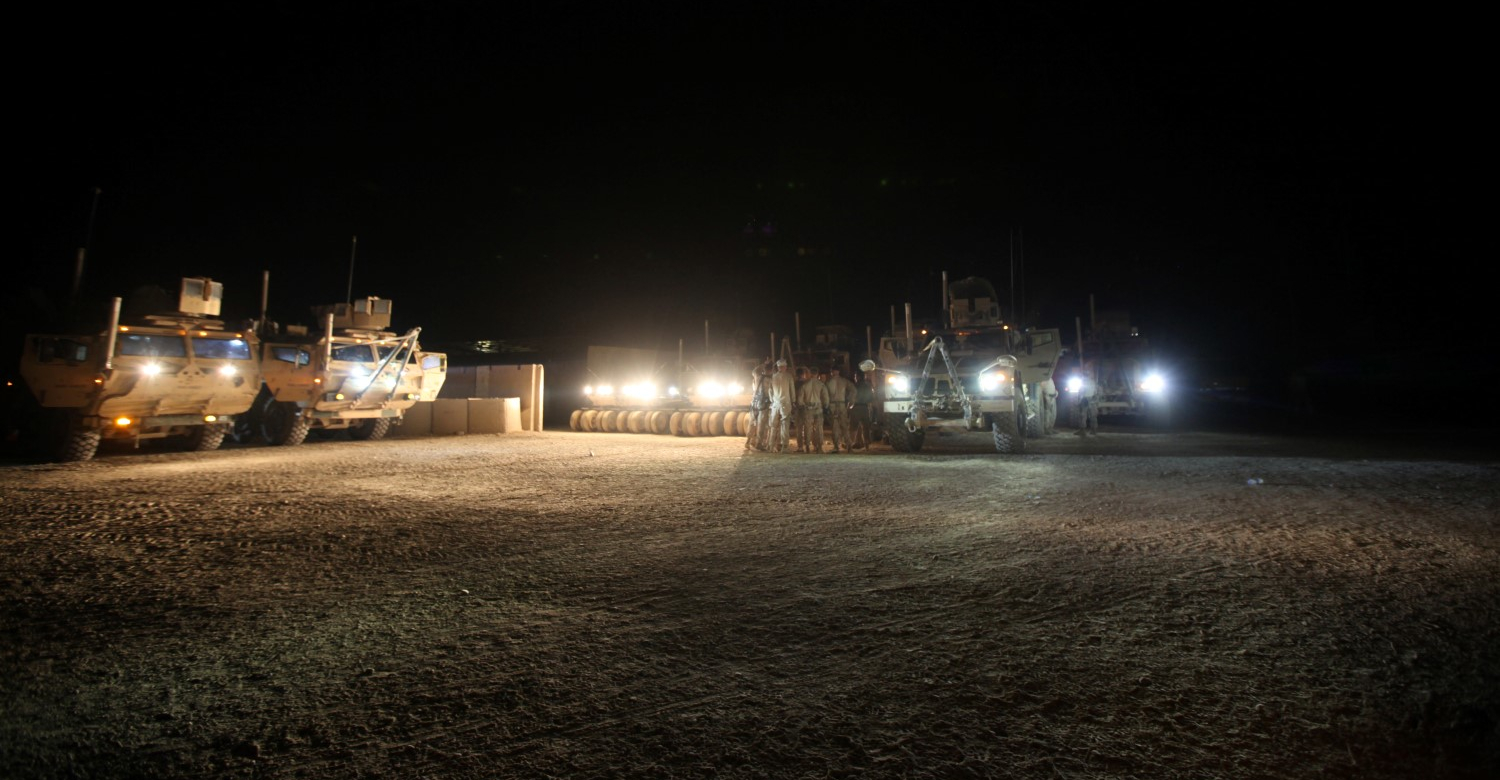 We taped the curling edges of our makeshift map to the General’s conference room – a holdover from the 2014 drawdown at Camp Bastion – and began to plan.

We frantically duct-taped our map together, matching gridlines from adjacent sheets of paper as an image of the snaking Helmand River emerged. Despite the reintroduction of Marines to southern Afghanistan in 2017, everything – aircraft, personnel, and drones – was in short supply, and sufficiently large map paper was no exception. Ink, too, was a precious commodity and we printed only in extremis. Our situation was dire enough to warrant four color maps cobbled together depicting our expected battleground: Babaji, Chah-e-Anjir, Bolan, and other villages along the fertile “green zone” of Central Helmand. We taped the curling edges of our makeshift map to the General’s conference room – a holdover from the 2014 drawdown at Camp Bastion – and began to plan.

The Taliban were coming to Lashkar Gah. The local barbers knew it. The media knew it. After a deliberate offensive in Ghazni, the telltale signs of an offensive loomed: rotational fighters were departing to Helmand, the Taliban were probing the city through a series of checkpoint attacks, and they had disconnected local cellphone communications in an attempt to isolate the city. We scrambled to mount a defense using the resources that kept Helmand afloat: intelligence, surveillance, and reconnaissance assets like armed Predator and Reaper drones, Afghan special operations forces employed with U.S. advisors, and, most importantly, a mobile 215th Afghan Army Corps and 505th Zone Afghan Police. We planned and we waited, expecting each round of nightly checkpoint attacks reported via radio to be the opening salvo of a larger offensive to take Helmand. Little did we know that our intelligence predictions were two years early, as the attack we feared came to fruition in October 2020 rather than September 2018. But this October, the tools our Task Force used to deter an offensive in 2018 were no longer readily available for U.S. forces in theater as the U.S. prepares to draw down following the Doha peace agreement.

Marines returning to Helmand in 2017 were accustomed to conventional operations like “Moshtarak” in Marjah District, which brought multiple Marine battalions fully equipped with coalition artillery and air against a Taliban stronghold in 2009. Our reintroduction was undoubtedly a shock for the grizzled veterans of Moshtarak: rather than a disciplined Marine maneuver force, our maneuver force was a poorly disciplined and ill-equipped group of disparate Afghan battalions. Our command was a makeshift group of 300 Marines. What had been a conventional Marine command accustomed to “ground and pound” warfighting found itself coaxing Afghan Army and Police forces in a train-advise-and-assist role. Meanwhile, our operations and intelligence staff merged in an approach analogous to a special operations command to dynamically target Taliban fighters.

The Afghans were the maneuver force; we ceded control to the peculiarities of their planning as operations were often organized the morning of. But if the Afghans moved, they maintained momentum. The Taliban would come out to fight but would be in a reactive rather than offensive role. Thus, unmanned and fixed wing aircraft became our primary assets to shape the battle as the Afghan Army would often only move under the cover of our fires. Even the lawnmower sound of our ScanEagle or the sight of fixed wing aircraft screaming overhead would send the Taliban diving for cover and embolden our partners. As murmurs of a fall Taliban offensive on Helmand mounted, we deterred the Taliban through a series of operations in Central Helmand as the Afghans moved and we kept the Taliban off balance enough to deter a mass offensive. Our targeting team struck on a daily, and often hourly, basis in support of the Afghan Army, screening ahead of the force to locate armed Taliban commanders through grainy video feeds. We weren’t winning, but we certainly weren’t losing either as we maintained an ebb and flow stalemate along the Nahr-e-Bughra canal, Central Helmand’s dominating feature.

We were sure a massive offensive on Lashkar Gah would begin at night. In the evening, the Army and Police sat on their checkpoints in a reactive posture, facing a better equipped force with thermal sights and night vision devices. It was the Taliban who owned the night in Helmand rather than the Afghan Army. Special Taliban “red unit” fighters rotated into Central Helmand after the Taliban’s August siege on Ghazni, conducting increasingly lethal coordinated attacks as the noose tightened around Helmand. Our ace in the hole was the Taliban’s original inspiration for the red units: Afghan special forces teams accompanied by U.S. forces and National Directorate of Security (NDS) strike forces.

Afghan special forces advised by U.S. forces are the premier crisis response units in Afghanistan and are regularly re-distributed throughout the battlespace to match Taliban offensives. Just as conventional Afghan forces moved during the day, NDS and Afghan special forces conducted raids at night to keep the Taliban at bay. In response to the threatened offensive, our special forces teams accelerated raids in the battlespace to a breakneck pace. Former Joint Special Operation Command General Scott Miller’s assumption of the Resolute Support Mission in August strengthened an already robust relationship between conventional and special operations in Helmand. General Miller’s readiness to use special operations as a surgical maneuver force enhanced our ability to pressure the Taliban. Deep and close raids targeted red unit bed down locations and cache sites along the forward line of troops and Taliban strongholds in northern Helmand. This pro-active approach – while limited by aircraft and drone availability – effectively disrupted Taliban staging areas like Babaji and Khushkawa on the outskirts of Lashkar Gah.

Through no fault of their own, Resolute Support Command and the Afghan Army have been hamstrung by the terms of the Doha Agreement.

Throughout September 2018, we continued to wait. But as September melded into October, the threat never materialized. Ultimately, our rotation departed Helmand without a mass attack to combat despite the flood of reported threats in August. Aside from luck, what distinguished our 2018 experience from the offensive that played out two years later and which has brought Lashkar Gah to the brink?

Through no fault of their own, Resolute Support Command and the Afghan Army have been hamstrung by the terms of the Doha Agreement. The adage “you have the watches, but we have the time” rings true as the agreement sets a clear time versus conditions based approach to a drawdown. The phased withdrawal has diminished NATO’s ability to defend Lashkar Gah as Marines left Bost Airfield this spring, thereby losing a robust source of intelligence to provide indications and warning of an attack on the capital. The loss of this node cannot be overstated, as Marines serving at Bost were a key conduit of information with NDS, the Afghan Police, and the Afghan Army. On October 7th, U.S. President Donald Trump tweeted his plan to return American troops from Afghanistan by Christmas 2020. Time favored the Taliban, and they were about to make a play for the watches. Two days later, the assault on Lashkar Gah began.

Afghan and U.S. troops were caught flat-footed. In the wake of the peace agreement, the Taliban were facing a stagnant, demoralized Afghan Army force reliant on an undermanned police force to secure Lashkar Gah. The proactive edge that the 215th Corps had gained prior to the Doha agreement had disappeared, allowing the Taliban to tee off against the Afghan Army and Police forces and overrun bases on the outskirts of Lashkar Gah. Moreover, in accordance with the peace agreement, Afghan forces were reliant on the Afghan Air Force – an overmatched force which suffered fatal helicopter crashes while responding to the attack – to provide air support at the outset of the offensive. The deterrent force that U.S. assets provided was gone. The Taliban advanced upon and re-took former safe havens that the 215th Corps had wrested away in 2018 and 2019.

Meanwhile, the residual U.S. Marine force at Camp Shorab was forced to watch and wait as the Taliban descended upon the city over the course of four days. As the Taliban advanced within kilometers of the government center, watching and waiting eventually gave way to kinetic strikes announced on October 13, but the absence of a credible deterrent is what allowed the Taliban to nearly take the city. Months of relative inactivity sharply contrasted with the daily strikes conducted in 2018 and 2019. When NATO elected to respond with strikes, the drawdown of U.S. assets, including unmanned and fixed wing aircraft in accordance with the Doha agreement, necessitated a shift in limited assets to southern Afghanistan which undoubtedly opened the rest of the country up to other Taliban attacks.

Like the eventual NATO air strikes, the employment of partnered Afghan special forces units was also delayed. In the months prior to Doha, special operations had primarily shifted focus to ISIS-K and Al Qaeda, giving the Taliban the breathing room to plan and mount an operation like the one on Helmand. In February, the Taliban and United States agreed to cease specifically targeting one another. Unharried, the Taliban were able to bide their time and recover from 2017 and 2018 losses in Helmand. Whereas this October the eventual deployment of NDS units to Central Helmand stemmed the bleeding, in 2018 the Taliban never breached the city due to consistent operational pressure in Helmand.

Ultimately, the 2020 offensive on Helmand will be remembered in a similar vein to the Taliban’s 2016 attempt to take the city: a close call, but Lashkar Gah held. A belated Afghan and coalition response allowed the Taliban to enter the city, but eventual U.S. strikes and partnered raids have temporarily deterred the Taliban as the Helmand Provincial Governor has declared victory despite continued skirmishes in the city. But how will a 2021 or 2022 offensive be remembered when this capacity is absent?

If the intent of the Doha peace process is to preserve U.S. lives and extricate American forces from Afghanistan as quickly as possible, then the U.S. should be pleased with the results. Since the Doha agreement, the move to rapidly draw down U.S. forces in both Iraq and Afghanistan has continued. On November 17, 2020, Acting Secretary of Defense Christopher Miller announced the drawdown of troops in Afghanistan and Iraq to 2,500 in each country by January 15, 2021. But the United States cannot claim to be leaving a stable, self-sufficient country behind. Americans need to be honest with themselves and their Afghan partners about what the Doha “peace” process means, particularly as its implications unfurled this month in Helmand: next year when an offensive occurs, the Helmand Provincial Governor will not be declaring victory. Even an undermanned U.S. response duct-taped haphazardly together like the map we used to plan our defense in 2018 is sufficient to deter the Taliban; unfortunately, the U.S. has decided that Afghanistan is not even worth that.

Nathan Lowry is a former Marine Corps ground intelligence officer with operational experience in Afghanistan, Africa, and Europe. He graduated from Cornell University in 2013 and is an incoming member of Harvard Law School’s class of 2024. The views expressed in this article are those of the author and do not necessarily reflect those of the U.S. Army War College, the U.S. Army, or the Department of Defense.

Photo Description: Marines and sailors with the Afghan National Police Advisor Team prepare to leave Patrol Base Dimond, Helmand province, Afghanistan, for the final time, June 27, 2014. The Marines and sailors of the ANPAT completed their eight-month deployment of advising the Afghan National Police to develop a strong, capable and credible police force for Helmand province. The ANPAT’s retrograde back to Camp Leatherneck, Afghanistan, was assisted by the Marines and sailors of Combat Logistics Battalion 7. 2014 marked the first major withdrawal from Helmand province, and at the time those familiar with the region predicted the downward spiral that would lead to the conditions the author describes above.