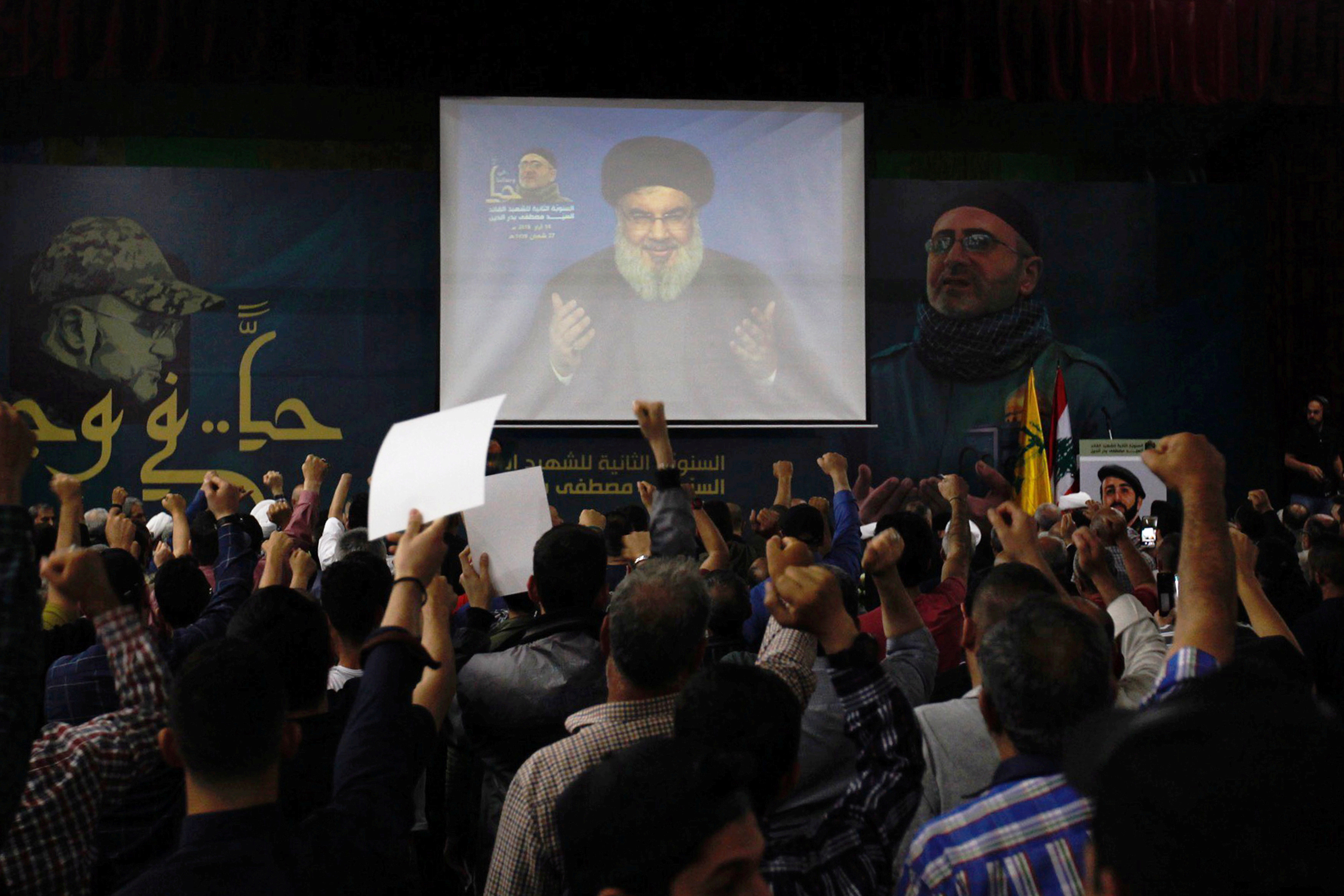 Turmoil is not new to the Middle East, but it has been especially pronounced since the start of the “Arab Spring,” in 2011. But, to invoke a tired but true French epigram, “plus ça change, plus c’est la même chose.” What has changed in the Middle East? Rather than progress toward peace, or freedom from terror and authoritarian rule, regional threats in the Middle East not only remain active but have grown stronger. Amidst this turmoil, Israel has hoped for the best but continued to plan for the worst. As much as one hopes for peace, history and today’s reality both show that continued vigilance is essential. Nowhere is this vigilance more necessary than in dealing with Hezbollah, the powerful Lebanese group that poses a particularly significant threat to Israel.

Israel has undertaken initiatives to increase regional cooperation with its patron, the United States, and Israel’s Arab neighbors. Aligning Israeli and Gulf Arab interests are an increasingly dangerous Iran and its proxies, especially Hezbollah. This Iranian axis seek to wear down Israel and the Arab states, and to kick the United States out of the Middle East. Notwithstanding the violence and disruption created by ISIS, Iran is the most fundamental and enduring threat to stability in the Middle East, and Hezbollah is a key part of Iran’s strategy.

The Evolution of Hezbollah

Hezbollah was created in the chaos and violence of Lebanon’s civil war, and was the Israel Defense Force’s (IDF) main foe during the Israeli deployment in Lebanon, from 1982-2000. The Second Lebanon War, in 2006, was provoked by Hezbollah. This war was at best inconclusive, and showed how effective Hezbollah could be. It also left open the possibility of renewed hostilities. Since then, Israel and Hezbollah have been preparing for another round.

Hezbollah originally preferred guerrilla warfare and organized accordingly, remaining elusive. However, this changed as Hezbollah grew in power during the late 2000s, including its official recognition by Lebanon’s cabinet that gives it the right to “liberate or recover occupied lands.” Because many Lebanese view Hezbollah as liberators of their country, Hezbollah enjoys tremendous popular support, despite some controversy regarding its role in supporting the Assad regime. This elevated political status, coupled with its extensive operations in the Syrian civil war, have fostered Hezbollah’s growth into a more traditional, highly capable military organization. Many of these capabilities are of great concern to Israel.

Hezbollah’s military wing is based on infantry units, armed with anti-tank missiles and hundreds of drones. Their most powerful weapons are their rockets. The group has up to 150,000 rockets and missiles, far more than any other Arab group. Those rockets and missiles have various warheads; ranges etc. a few of them cover all of Israel, which is about 20,000 sq. km. (about the size of New Jersey). They have the capacity to fire more than a 1,000 rockets a day, reaching anywhere in Israel.

Hezbollah is also highly competent and experienced in urban warfare, which they would use to great effect in a renewed conflict with Israel. In the start of a war, Hezbollah has the capacity to storm villages on the Israeli border. Although Hezbollah still lacks the capacity to hold land in the face of an IDF counterattack, the effects of such a border strike would be great. Hezbollah would use a violation of Israel’s sovereignty to claim victory and gain more support. Similarly, Hezbollah would use its rockets to attack both civilian and military targets, including vital infrastructure, air fields, headquarters etc. aiming at causing casualties and damage, undermining morale and disrupting Israeli activities.

However, Hezbollah is far from invincible, and its involvement in the Syrian civil war has been militarily and politically costly. The group has lost up to 2,000 fighters, a significant price for an organization with no more than 50,000 effective members, including reserves. Hezbollah requires time to recover from those losses. During its deployments to the Syrian War, Hezbollah has been careful not to be entangled in another ground war, but its rockets, drones and other asymmetric capabilities provide strategic options that put pressure on the IDF to be ready.

State of the IDF

The war of 2006 against Hezbollah revealed the poor readiness of Israeli troops, due to lack of training. The IDF was unprepared to deal with the nature of the terrain of Lebanon, while Hezbollah was obviously familiar with the landscape of that country. In response to this problem, the IDF has increased training in areas with terrain similar to Lebanon’s, such as the north of Israel and, in some cases, Greece and Cyprus.

Among the IDF’s initiatives since the 2006 war is the establishment in 2015 of the 89th commando brigade, aimed at launching airborne assaults deep inside Lebanon, targeting rockets and Hezbollah’s headquarters. Israel also invested heavily in its military industry such as in a sophisticated C4I (Command, Control, Communications, Computers and Intelligence) network. It allows ground, air and sea units to share date between them. Granted, troops may get too accustomed to relying on technology and therefore be at risk when it fails. For this reason, the IDF has continued to train soldiers to carry out their missions without those advanced systems.

Thanks to generous American support, Israel has developed an active defense, weapon systems such as the Iron Dome that intercepts rockets. However the Iron Dome does not have enough missiles to shoot down most of Hezbollah’s rockets. The IDF recognizes that the Iron Dome can’t protect every civilian and military site. Therefore the Iron Dome will defend only key infrastructure, which means that large part of the Israeli population will be exposed to rockets. To offset this vulnerability, the IAF has been training in carrying out thousands of sorties against Hezbollah, seeking to destroy rockets before they are fired from Lebanon.

In recent years, many IDF exercises have been aimed against Hezbollah, including a September 2017 exercise that was the biggest in almost two decades, and exercises in February 2018, involving the IDF’s Galilee division. The IDF has been working on improving operational skills, such as upgrading of the cooperation between its air and ground forces. Furthermore, the IDF has sought to learn from its engagements with Hamas in the Gaza Strip, which could help in fighting another hybrid force, Hezbollah.

Hezbollah has become the core notional opponent in Israeli defense strategy. The 2018 version of IDF Strategy explains its overall strategic and operational approach in regard to Israel’s foes such as Hezbollah. The IDF Strategy calls for achieving a fast victory, and by that to reduce to the minimum the casualties and damages that Israel will absorb.

What if War Breaks Out?

Assuming that Hezbollah indeed opens fire at Israel or conducts raids on its northern villages, the IDF would likely respond with a large scale offensive to south Lebanon, where about 200 villages and towns provide Hezbollah with places to deploy its rockets. Senior Israeli officials have warned over and over again that the IDF will have no choice but to strike populated areas in Lebanon, since they are used as a fire base. Therefore the IDF has been training in close combat, including in underground warfare, by building specific facilities for that purpose.

The IDF enjoys overwhelming superiority over Hezbollah in the number and quality of troops and weapon systems. Furthermore in Syria Hezbollah became accustomed to enjoying air superiority, with close air support from Russian and Syrian aircraft that it will not have in the face of the powerful Israeli Air Force. In effect, Hezbollah’s migration from guerrilla warfare leaves it vulnerable to conventional attack, which the IDF would exploit.

But air power might not be sufficient to stop massive rocket attacks from pounding Israel. A massive ground offensive inside Lebanon may be the result. In the 2006 war, the IDF deployed five divisions against Hezbollah. One can assume the next war would require a similar or greater force, launched on a wide front, hoping to reach as many objectives as possible, in the shortest time. Moreover, given the previous eighteen-year presence in Lebanon (1982-2000) where the IDF struggled to deal with Hezbollah incursions, the IDF would want to avoid another occupation.

However such a war would play out, it seems unlikely that Israel would accept a repeat of the 2006 performance. For Israel, success in the next war with Hezbollah must establish conditions in which the Lebanese group is fully deterred.

The last thing the Middle East needs is another war. But the persistence of Hezbollah and its supporters in viewing Israel as an illegitimate state means that war remains possible, even probable. The world must not overlook this. For all of IDF’s capabilities and likelihood of success in a future conflict against Hezbollah, any failure of deterrence strikes a blow to those who wish to avoid a war and it will embolden other regional threats to take action. Israel, the U.S., and the Gulf Arab powers share a common desire to contain and deter Iran and its proxies. With strong support from the U.S., Israel will continue to stand against its determined adversaries, including Hezbollah. There is no other choice.

Ehud Eilam, Ph.D.is a national security affairs analyst, formerly working for the Israeli Ministry of Defense but now based near Boston in the USA. The views expressed in this article are those of the author and do not necessarily reflect those of the U.S. Army War College, U.S. Army, or Department of Defense.

Photo: Lebanon’s Hezbollah leader Sayyed Hassan Nasrallah is seen on a video screen as he addresses his supporters in Beirut, Lebanon May 14, 2018.