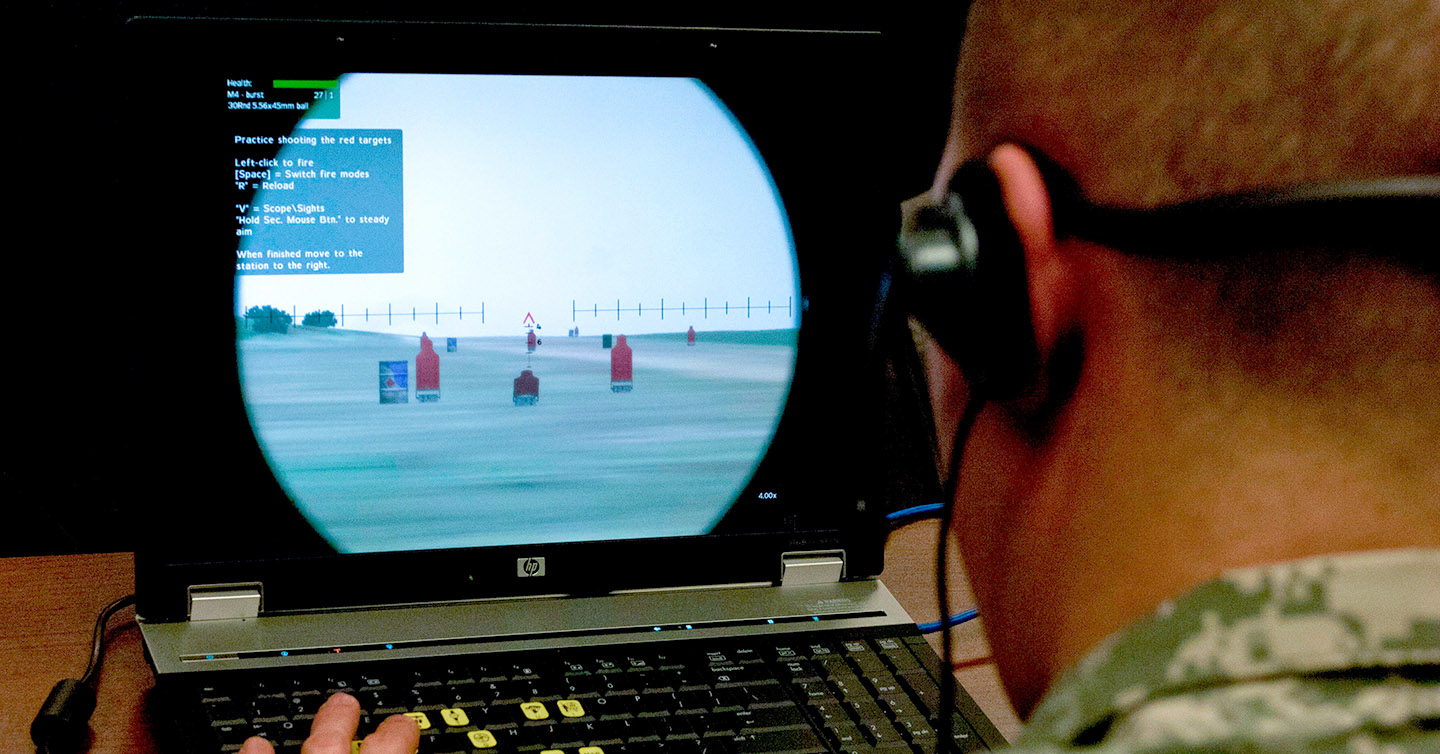 Also listen to a related presentation on this topic on A BETTER PEACE: The WAR ROOM Podcast!

Through visible steps forward such as the publication of the Strategy on Artificial Intelligence (AI) and the establishment of the Joint Artificial Intelligence Center (JAIC), the Department of Defense (DoD) is signaling its seriousness about making full use of AI. But military institutions have a deserved reputation for, at best, only a half-hearted embrace of disruptive technologies. To beat historical precedent, the joint force must take appropriate best practices from all sources, whether from inside or outside of government, to alter organizational mindsets, structures, and processes to better incorporate AI.

As part of a soon-to-be released U.S. Army War College study on “Commercial Strategies for AI Incorporation,” the authors surveyed the medical, banking, and insurance sectors to explore what organizational obstacles they are experiencing while incorporating AI technology. These sectors are not composed of cutting-edge tech companies like Google or Amazon, but are less tech-dependent organizations testing how AI fits into their business models. As such, they face many of the same questions as the military. The main obstacles encountered by the surveyed organizations reside in the areas of culture, data and infrastructure, and talent management. The solutions that these sectors are pursuing have applicability to the military as it faces challenges in the employment of AI across the joint enterprise.

The private sector fully appreciates the potential of artificial intelligence. Recent breakthroughs in data collection, computer processing power, and algorithm design have fueled progress in machine learning and captured the imagination of executives seeking competitive advantage. The banking and financial industries are utilizing AI to provide virtual assistants to customers while identifying and eradicate fraud. The medical sector is using AI, like IBM Watson, to provide support to doctors by analyzing data to help identify evidence-based and personalized treatment options. And the insurance industry is looking to AI to improve claims processing via chatbots that use natural language processing and sentiment analysis for personalized service right on one’s smartphone. The success of such initiatives lie not just with the technology, however, but with how well the technology is incorporated into the organization.

Will the Organizational Culture Accept AI?

Perhaps the biggest challenge for any company in incorporating AI is its organizational culture. A company’s culture can resist disruptive technology, especially if it threatens core models and processes that are engrained in the company’s identity. The workforce may view these models as sacrosanct because they have led to successes in the past. As such, the organizations we surveyed have generally been more successful in incorporating AI technology in back-office initiatives. Initiatives that impact core business models, on the other hand, take longer to fully incorporate. They meet the most cultural resistance, but also encompass the ideas that can truly bring revolutionary changes to how a business fundamentally functions.

Incorporating AI technology to improve back-office tasks and processes is the low-hanging fruit of adopting AI. It not only avoids the cultural backlash caused by altering core functions, but also often makes intuitive sense. Companies are automating systems to handle data entry, data processing, and other administrative tasks that needlessly burden humans. Hospitals are integrating AI to improve a doctor’s workflow while tending patients, reducing the required paperwork while increasing effectiveness. Insurance companies are using AI to streamline claims processes and reduce fraud. Banks like JPMorgan Chase are investing in technology that analyzes legal documents while extracting essential data points and clauses. The need to find efficiencies to allow humans to focus on more complex tasks has generally been an easy sell.

But for initiatives that take aim at a company’s core business processes, culture remains a formidable obstacle. AI can help unlock intraoperative procedures to detect deviations during surgery and prevent complications. But such tools require video data. Gathering such data runs counter to the culture of medicine, in which surgeons are reluctant to have their surgeries recorded. Bankers steeped in a culture that values personal interaction are reluctant to fully integrate online and mobile banking tools because their experience has convinced them that personal relationships are paramount. Yet digital-aged customers demand seamless integration of their finances across multiple platforms: branches, the internet, and their mobile phones. Insurance companies have for decades operated with the idea that theirs is a “high-touch” industry, needing human interaction to sell their products. Some executives are starting to question this culture, asking what the right mix of human and AI interaction is for the new tech-savvy generation.

Similarly, the military has also been more comfortable investing in back-office initiatives than in AI technology that truly affects how it fights wars. Current AI pilot projects have focused on peripheral areas like preventive maintenance and humanitarian assistance. The military has not yet invested in areas where AI can impact core warfighting functions like command and control. Such initiatives will likely challenge many cultural norms such as the role of the commander in decision making or appropriate levels of automation. Yet joint leaders should not shy away from exploring how AI-augmented warfighting can change the military’s “business model,” which would risk missing revolutionary changes needed for tomorrow’s battlefield.

Can We Get the Data Right and How Do We Build the Infrastructure?

Even if the culture is ready, a company will not find success if it cannot establish the right data infrastructure. Data is pervasive in today’s environment, and institutions that can capture and apply the largest data sets to train machine learning AI will have a distinct advantage. Laws and regulations that protect privacy and security have made data collection efforts in the United States more difficult than in countries with less restricted regulatory regimes, but various initiatives are underway. Insurance companies have telematic and wearable sensors to collect real-time data that allows personalized risk pricing. Apple is partnering with IBM to collect health data through smartphone apps. And improved AI technology is allowing the analysis of unstructured data found in old patient records to inform medical decisions.

To be of use, the collected data requires a healthy ecosystem, which a recent CSIS report defined as including the digital capability for handling data, a technical foundation of trust and security, and a skilled workforce and knowledgeable management. Companies fully committed to incorporating AI technology have invested in sufficient computing and networking capabilities. These companies have hired highly competent network managers who can both protect their networks from the outside world and enable optimal sharing. Such ecosystems have sometimes risen in the form of data centers like the Center for Clinical Data Science in Boston, where hospitals share data sets to foster research. Without such an ecosystem, AI initiatives inevitably fail. One company we visited relayed its initial difficulties in operating without such an ecosystem. It had hired five data managers to jumpstart its AI initiative just to see four of the five soon quit citing a shortfall in computing power, burdensome network access procedures, and a lack of understanding from the company senior leadership.

For the military to accelerate its employment of AI technologies, it also needs to develop an associated data infrastructure strategy. The joint force generates massive amounts of data, but much of it is unstructured and resides in various platforms that cannot communicate with each other. The military must develop a workforce that understands the importance of data and redouble its efforts to collect, curate, and share data. The U.S. Army Intelligence and Security Command is building a cloud-based system that uses commercial e-commerce solutions to manage data to make it accessible down to the tactical level without requiring a significant overhead in terms of hardware and conductivity. Such initiatives are steps in the right direction.

How Do Companies Manage Talent in an AI-enabled Environment?

A recent McKinsey & Company report identified talent as a key barrier to AI adaptation. Successful companies have learned that they must recruit the right types of people and place them at the right locations in their organization. Proactive companies seeking to adapt to the new age are recruiting data managers who can visualize an architecture and format data, data scientists to write and modify algorithms, and translators who understand both the technology and the business to explain the science to the executives and customers. Most large companies keep most data managers and data scientists centrally located at headquarters with much smaller teams at dispersed locations such as bank branches or medical clinics. These local teams augment the overall effort by sensing their immediate environment and adapting algorithms to their specific region, for example adapting the language recognition algorithm for callers speaking with a New York versus a Deep Southern accent.

As data and AI become increasingly important for the success of companies, experts on these capabilities have become eligible for promotion to positions in the upper tiers of leadership previously reserved for those working core business functions. The growing importance of the chief data officer (CDO) position is a case in point, especially in the financial sector. The CDO is charged with ensuring their companies are data-driven and poised to capitalize on the evolving technological breakthroughs. CDOs are helping organizations bridge the “widening gap between business development, data management, and data analytics.”

Talent management of those with AI expertise is an area where the military lags. Although DoD has data experts in research labs and key headquarters positions, they are not a part of the military force structure.  Outside the cyber force, the military does not actively recruit digital experts that can one day lead the integration of increasingly complex technologies. And though several organizations have experimented with analyst/data scientist teaming to bring AI augmented intelligence to special operations organizations, these types of innovative structures have not entered the mainstream conventional forces. Finally, the services should explore how to promote officers steeped in digital expertise to their highest ranks to lead the transformation of these organizations to integrate AI advances.

History is replete with examples of militaries that possessed certain technologies but failed to incorporate them organizationally to succeed in battle. As our adversaries seek to offset our advantages using AI, the U.S. military must also quickly innovate and incorporate. To hasten this process, we can learn from different industries struggling with similar challenges. Adjusting our culture to accept AI augmentation in warfighting, investing in data infrastructure, and managing the AI talent are worthwhile lessons coming from the commercial sector. Ignoring such lessons will only cause us to fall further behind our strategic competitors in preparing for future conflicts.

Photo: A Soldier aims at a target while using the Virtual Battle Space 2 computer simulator at Fort Eustis in 2013.