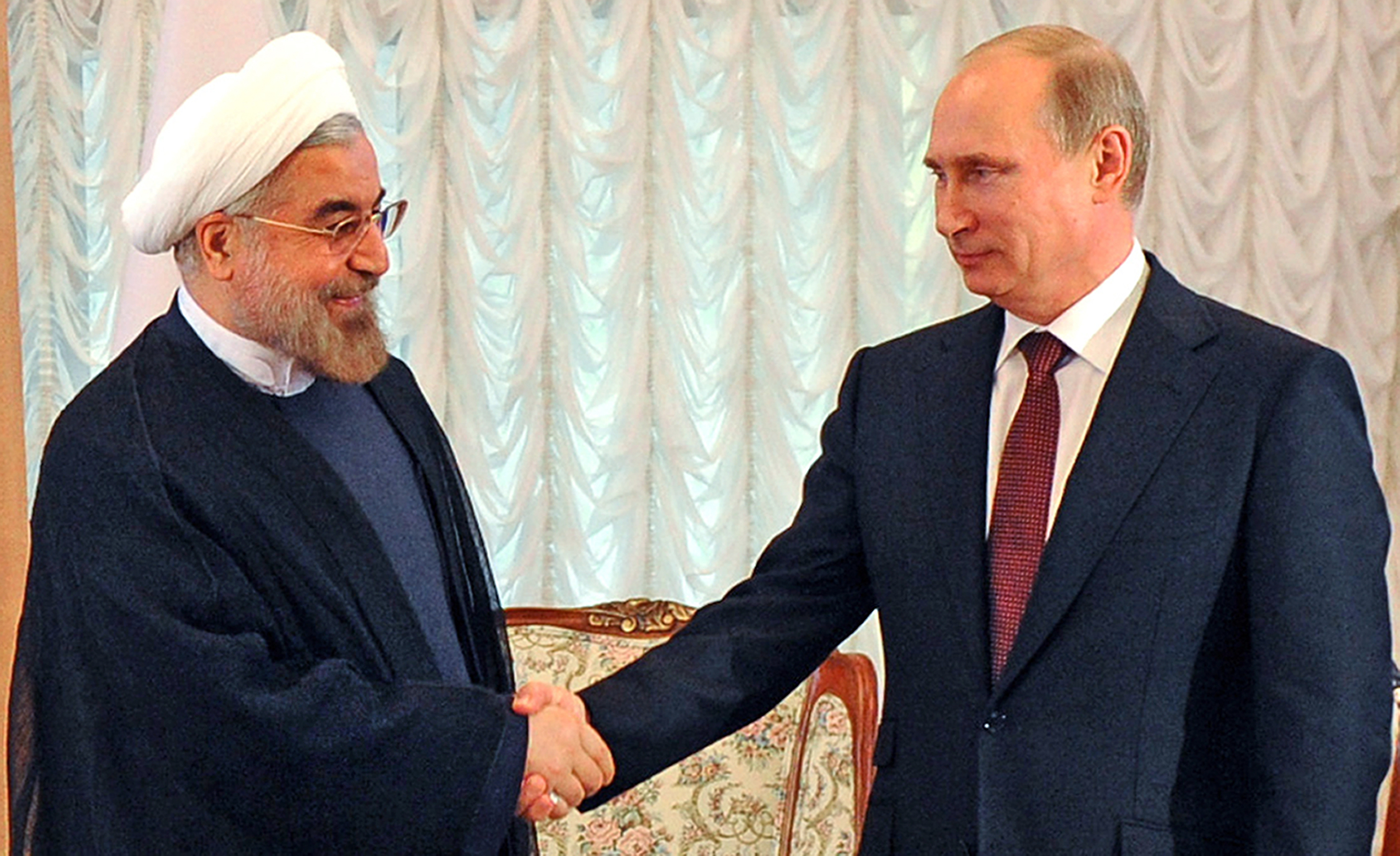 Vladimir Putin is seizing the initiative to reassert Moscow’s influence in Europe and Asia in an increasingly belligerent and expansionist policy.

You will come from your place in the far north, you and many nations with you…a great horde, a mighty army. — Ezekiel 38:15

The ancient Hebrew prophet Ezekiel prophesied in 570 BC of massive armies from Persia and other lands, uniting in a powerful force led by a leader from “the far north,” that would wage war in the Middle East in the latter times. Without commenting on Ezekiel’s reliability, Moscow is today seeking to create a new coalition with both Turkey and Iran which — if successful — would realign the power base in Eurasia and the Middle East. Recent events in Europe and the Middle East may be accelerating the Kremlin’s opportunistic, geopolitical ambitions.

Europe seems to be on the edge of a precipice. Not since the end of the Cold War has there been so much potential for disaster on the Continent. Indeed, the former balance of power and the nearly 70 years of relative peace it brought may be ending. This is compounded by growing disunity between the United States and Western Europe. Meanwhile, Vladimir Putin is seizing the initiative to reassert Moscow’s influence in Europe and Asia in an increasingly belligerent and expansionist policy.

Although Putin’s stated policy is to reassert strategic influence and control in nations bordering the Russian Federation, his goal is increasingly difficult to achieve. This is particularly true with regard to those nations that have joined the North Atlantic Treaty Organization (NATO) to safeguard their borders, notably the Baltic States of Estonia, Latvia, and Lithuania. The American commitment to its Article 5 obligation (an attack upon one member of NATO shall be considered an attack upon all) led it to deploy forces (in 2014) to each of the Baltic nations, in response to Putin’s war against Ukraine. Other NATO nations followed suit with multinational battalion task forces arriving this year in Estonia, Latvia, Lithuania, and Poland. The arrival of these follow-on forces has transformed the international presence in the region from assurance to deterrence. Ukraine has neither. Ukraine is the latest country to suffer the consequences of Moscow’s vision of a new world order in Europe, but Russia’s 2008 war against Georgia and the subsequent annexation of South Ossetia and Abkhazia already portended ambitions of a larger realignment being pursued.

Farther away, in the Middle East, Putin’s decision to deploy forces to Syria suggests a grand strategy that extends beyond Europe, the Caucasus, and Central Asia. Russia is trying to take advantage of the fractures created by America’s recent struggles in Iraq and the upheaval of the Arab Spring to rearrange the alignment of power in the region. Russia is becoming a political wedge that undermines Western interests in the Middle East as well — and undermines NATO in the process — by plying its interests through Iran and the Republic of Turkey, respectively. Tehran has been a rogue nation since 1979, and the antithesis of American foreign policy objectives in the region; Turkey, however, which straddles Europe and Asia, is a NATO ally whose continued support is critical to the Alliance’s effectiveness.

Thus, a longer view from Moscow is the desire to slowly pry Ankara’s loyalties away from NATO. Such an outcome would be a boon for Russia, and the fulfillment of one of its main aims: undermining the NATO alliance. Putin continues to deftly exploit Erdogan’s drift from the Alliance in myriad ways, as noted by Michael Rubin of the American Enterprise Institute, appearing in The National Review. Among those he noted are: (1) Russia’s negotiations with Turkey to cut multi-billion dollar “energy, infrastructure, and nuclear deals”; (2) the pair’s hasty reconciliations despite Turkey’s shoot-down of a Russian fighter jet and the assassination of a Russian ambassador in Turkey; and the frequent appearances of Russian propagandists who rail against the West in Turkish media.

Ironically, both Turkey and Iran were vital to the United States’ strategy of containment toward the Soviet Union during the Cold War. Turkey and Iran signed a treaty in 1955 that included the United Kingdom, Iraq, and Pakistan as part of a military alliance called the Central Treaty Organisation (CENTO, or, the Baghdad Pact). CENTO was part of a greater strategy to blunt Soviet expansion. However, unlike NATO, CENTO lacked unified leadership and slowly fragmented. After the 1979 Iranian Islamic Revolution, the alliance ceased to exist.

The key nations in CENTO were Turkey and Iran, two traditional regional powers with large populations and abundant natural resources. Russia is targeting these same nations to undermine American influence and power in Europe and Eurasia. As noted, its approaches include energy deals, to include enticing Turkey with an energy boon by diverting a gas pipeline and by forging closer military cooperation with Tehran. This is a brilliant stroke, the ultimate aim of which is to build a coalition that can serve as an alternative to Western security, to be provided instead by a Kremlin-dominated Collective Security Treaty Organisation (CSTO). The purpose of such a security arrangement is twofold: (1) to create a security belt along the Russian southern frontier, and (2) to counter American and Western influence in Europe and the Middle East.

Moscow led peace talks in Astana, Kazakhstan to come to an agreement on the crisis in Syria. Representatives from Turkey and Iran were also present. Although the interests of Iran and Turkey do not necessarily align in the Syrian war, the instability and ensuing refugee crisis has provided a basis for cooperation. The Astana talks were a good way for Moscow to advance its Eurasian strategy. The talks provided Russia with a forum to demonstrate its importance and influence, especially in connection to its growing influence regarding Turkey and Iran.

An Iran-Turkey-Russia axis of power has the potential to alter the regional geopolitical alignment and forge a new order that would have the historic, economic, military and cultural power to supplant Western influence.

The Russian strategy in Syria has not been without blunders. Its “take no prisoner” approach in the Aleppo Campaign is indicative of this, not to mention the bombing of UN relief convoys and other violations of international law. However, such atrocities are unlikely to elicit the same outrage in Ankara and Tehran as they do in Berlin or Paris.

Moscow’s ambitions in Syria are aligned with those of Iran, and it has worked with Russian forces to ensure that Tehran is given a free hand in Iraq, while expanding its influence in Syria. The endgame is to prop up a long time Russian ally — the Assad regime — while strengthening its ties to Tehran, which has a long history of opposing the United States in the Middle East. In the midst of the Syrian situation, Moscow has balanced the diverse interests of Turkey and Iran to encourage cooperation among the three nations. Sergey Karaganov, the head of the Russian Council on Foreign and Defense Policy stated, Russia possesses a “strategic vision and strategic patience” to forge such a cooperative security agreement regionally. Turkey’s context within this scheme is complex. The drift of Erdogan’s government away from a secular state has increasingly put it at odds with the United States in reference to its policies towards Israel and Iraqi Kurds, and its support for Syrian rebels. Ankara is poised to reap benefits from both Moscow and Washington DC, as both try to maintain greater influence over it.

Iran, Turkey, and Russia again made progress on their triumvirate cooperation on December 31, 2016, when they collaborated to pass UN Resolution №2336. This focused on solving the Syrian crisis in favor of the Moscow, Ankara, and Tehran view. The resolution outlined five outcomes:

A disconcerting aspect of this accord was the stipulation that Iran, Turkey, and Russia would serve as the guarantors of territorial integrity of the Syrian Arab Republic, giving the three nations responsibility for observing and enforcing compliance of the ceasefire in Syria. This is especially notable because it is the first time since the collapse of the USSR that Russia is taking a leading role as a guarantor of regional security. Given this significance, Moscow attempted to achieve a positive outcome from the Syrian talks. Yet, the talks ended in May with no viable settlement.

Russia is pushing hard diplomatically to align the three nations to cooperate on Syria. The key issue for Russia is more than merely propping up the Assad regime. Crucially, Russia must maintain military access in the region. This was recently shored up, on January 18, 2017, when Russia and Syria signed a document that guaranteed Russian warships’ access to Syria’s Tartus base, and for military aircraft to the airbase at Hmeimim. The terms and conditions of the agreement are valid for 49 years with automatic extensions for successive 25-year periods. This is viewed as the beginning of an effort to counter American interests in the region, with an eye on eventually supplanting the West.

The key to this growing Russian influence in the region is a common enemy in the form of the Islamic State. This shared adversary has drawn Ankara closer to Russian policy over the past year and resulted in joint military operations against Islamic State. Most observers missed the importance of this event. This plainly changes the post-World War II security arrangements, with Moscow now cooperating with Ankara; it is the first time in more than 200 years that Russia and Turkey have conducted a joint military mission. The last time was in the 1800s when the Ottomans and Russians fought together against Napoleon.

Despite divergent interests, pragmatism is pushing Russia, Iran, and Turkey together to confront the Syrian crisis. Iran has the most to gain as it is advancing Shia influence in the Eastern Mediterranean, while enabling Russia to fulfill its national expansionist ambitions too. Turkey hopes to contain the Kurds by working with Moscow. Although neither Turkey nor Russia wants the creation of an “Iranian land corridor,” Tehran is crucial in securing an agreement with the pro-Shia elements in the region.

An Iran-Turkey-Russia axis of power has the potential to alter the regional geopolitical alignment and forge a new order that would have the historic, economic, military, and cultural power to supplant Western influence. This is the long-term aspiration of the fledgling alliance developing among these three nations. A common enemy (Islamic State), and Turkey’s frustration with inconsistent U.S. policies towards Syria, the Kurds, and Iraq are the key drivers to this new axis of power. If it comes together, such a coalition has the potential to create a new and potent force that could reshape an important part of the world, and would have seismic strategic ramifications for Europe and the United States. Indeed, the ‘ruler of the far north’ does have an opportunity to change the course of history.

Ridvan Bari Urcosta is a Research Fellow at the Institute of International Relations at Warsaw University, Poland. Doug Mastriano is a colonel in the U.S. Army and member of the U.S. Army War College faculty.

Photo: Russia’s President Vladimir Putin shakes hands with his Iranian counterpart Hassan Rowhani as they meet on the sidelines of a summit of the Shanghai Cooperation Organization (SCO) in the Kyrgyzstan’s capital Bishkek, on September 13, 2013.