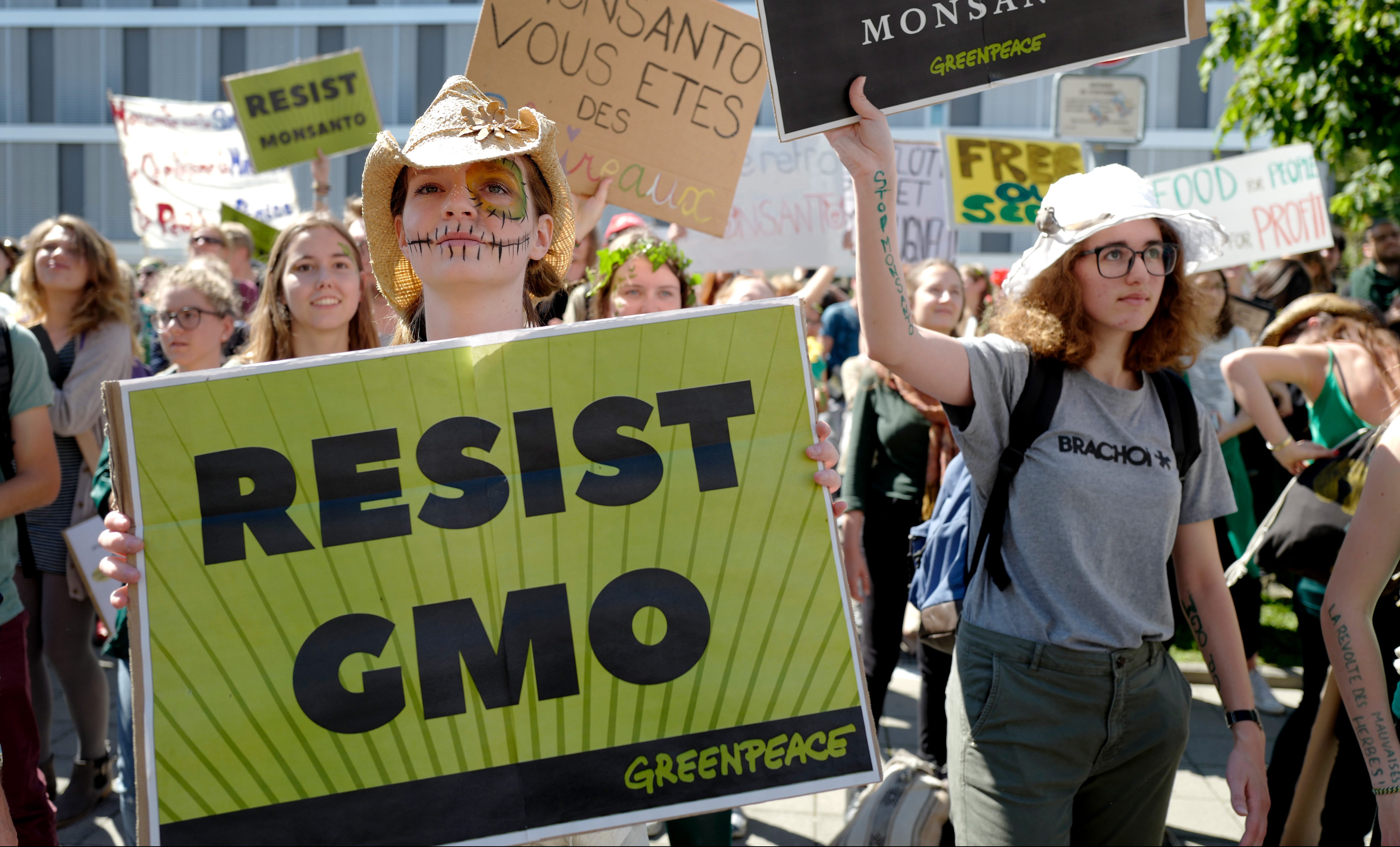 In managing biotechnology, it is tempting to respond to its dangers by simply banning all research and development that involves the direct manipulation of the genes of organisms, relying instead on traditional approaches. This would be a terrible mistake.

Genetic engineering and its products both threaten and benefit United States national security in core areas of food security and public health. A nation whose people are sick or starving is not secure, and biotechnology has the potential to significantly impact food security and health. Increases come from the development of more robust organisms that are resistant to pests and drought (e.g., Rainbow papaya, American chestnut). However, such novel (same say unnatural) organisms raise questions of unintended consequences, such as the potential to disrupt or damage existing ecosystems and their constituents. For example, how will these organisms react to the various environmental stressors they encounter? What if the gene were to stop working suddenly (known as “gene silencing”) and these organisms again became susceptible to disease? And what if this newly disease-susceptible gene transferred back to the original crop and created a new threat?

Major technological advances often pose terrible dilemmas. At the dawn of the nuclear age, scientists involved in the Manhattan Project struggled with the profound implications – good and bad – of the weapon they had created. Today, artificial intelligence presents a similar dilemma with its tremendous potential for both production and destruction. Predictably, genetically modified organisms (especially crops) are controversial and have aroused significant opposition worldwide due to the fears surrounding them.

In managing biotechnology, it is tempting to respond to its dangers by simply banning all research and development that involves the direct manipulation of the genes of organisms, relying instead on traditional approaches. This would be a terrible mistake, not only because it would prevent innovations that could dramatically improve the welfare of U.S. citizens, but also because it would expose the U.S. to the risk of falling behind competitors in an area with such profound security implications.

Despite the controversies surrounding biotech, the U.S. cannot afford to remove itself from research and innovation in this area, for the loss of its competitive edge to other countries that have less burdensome regulatory regimes (e.g., China) may be an even greater threat. How does the U.S. address the risks of excessive biotechnology regulation while protecting its citizenry from potential biotechnology-produced harms?

While advances in genetic engineering may provide new or improved solutions to some of the biggest challenges facing society today (e.g., food insecurity, infectious disease, climate issues), these technologies are considered dual-use, or have applications that can be both beneficial and harmful. This “dual-use dilemma” has been at the forefront of public consciousness since the advent of nuclear fission, and is readily associated with biotechnology advances that can provide critical research knowledge as well as potential harm (e.g., synthesized viruses like the Spanish Flu). Therefore, it is no surprise that public concerns exist about the potentially adverse consequences that could result from genetic engineering advances. This could very well result in an overly cautious regulatory system, which would not bode well for the U.S.

More biotechnology products are expected in the next five to 10 years than ever before. This is reason enough to ensure that the gold standard for regulation long associated with U.S. agency oversight is upheld. The U.S. must allow for innovation and not adopt an onerous and cumbersome approval process. Overregulation will likely result in the producers’ loss of ownership early in the development of innovative biotechnologies. This poses an actual threat to national security, as opposed the potential dual-use nature of the technology itself.

The U.S. Government has long managed the risks of dual-use technologies, from nuclear proliferation to medical breakthroughs. A 2003 unclassified report from the Central Intelligence Agency describes how advances in biotechnology, coupled with difficulty in surveillance can pose a biological warfare threat to the U.S. However, regulation considerations for rapidly advancing genetic engineering techniques have long preceded the perceived national security threat: the National Institutes of Health) established guidelines for research at the advent of recombinant DNA research as early as 1976.

Since the establishment of the initial research guidelines, regulation of biotechnology has raced to keep up with the rapidly evolving applications. Regulatory approaches vary by nation and sector, and range from precautionary (e.g., France and Germany) to prudent (e.g., in the United Kingdom and the U.S.). Most regulatory regimes have struggled to accommodate new and improved applications of the technology through archaic regulatory guidelines. For example, the development of a range of genetic engineering techniques referred to as “synthetic biology” has improved methods of genetic manipulation and design of genetic pathways to achieve more precise control of biological systems, thereby allowing scientists greater capabilities to engineer organisms. These advances resulted in the commissioning of a 2010 study by the U.S. Presidential Commission for the Study of Bioethical Issues. It concluded that synthetic biology regulation “remain forward looking about the potential benefits and risks to the public,” but, “[did] not recommend that additional agencies or oversight bodies need to be created to oversee synthetic biology.”

Current U.S. regulation of genetically modified products follows a risk-based approach, which looks at the final product (as opposed to many countries in Europe, which take a “process-based approach”). Currently, all eyes are on the U.S. to see how governance of biotechnology proceeds following an update to the 2017 Coordinated Framework for Regulation of Biotechnology Products. While the final version maintains much of the original 1986 biotechnology regulatory framework, the update aimed to clarify the roles and responsibilities of the U.S. agencies charged with governance. It also brought in expert analysis to develop a long-term strategy for a regulatory system that could accommodate future biotechnology products.

U.S. and global regulation of biotechnology has and will continue to evolve in an attempt to keep up with the rapid technological advances (e.g., genetically modified mosquitoes). Furthermore, new products are in development, which may present additional regulatory challenges quite different from the products approved to date and currently in the pipeline. The final version of the update to the Coordinated Framework for Regulation of Biotechnology Products came out in January 2017, but has been largely criticized for writing hypothetical product regulations instead of clear laws for regulating new biotechnology products. Regulatory agencies like the Food and Drug Administration  produced their own proposals for oversight that, until June 19, 2017, were open to receive public feedback.

Offering the public the opportunity to engage with regulators and provide feedback can go a long way in addressing public perceptions of risk, particularly those around advancing technologies perceived as “unnatural” or “acts of playing God.”

Public engagement can increase legitimacy, top-down and bottom-up learning, and mutual respect. These types of measures can help build trust in any regulatory decisions, which is critical for effective risk regulation. Previous stakeholder actions in the biotechnology sector, such as those taken with Genetically Modified Organisms (GMOs), shaped levels of public trust and subsequent perceptions of risk. In order to avoid the pitfalls of too much regulation, lessons must be learned about the power of public perceptions of risk and their impact on regulation.

In addition to public engagement, measures towards increased stakeholder transparency must address concerns over scientists “playing God.” If the public perceives that the academic and industrial research communities are not accountable for their actions, then researchers will be less likely to disclose intended uses of genetic engineering technology, and may remove themselves entirely from the field. Thus, the public relations stigma of biotech can impede the advance of crucial biotechnology products, or limit the applications of existing technology. The net effect can be similar to that of an outright ban, regardless of whether the biotechnology has regulatory approval (e.g., GM salmon). In other words, without effective public engagement and education, the U.S. can get the regulations right and still have a crippled biotech research capability.

Biotech is a dual-use technology that has tremendous potential for both good and bad. If used appropriately, it can dramatically improve the human condition; but it also has the potential for more nefarious outcomes.

Stakeholder transparency and public engagement are not necessarily panaceas for public acceptance. It is the duty of experts and elected officials in democratic states to reduce the burden of technical information and subsequent decision-making requirements for the lay public. Instead of involving the public in potentially complex risk-benefit analyses, public acceptance and challenges related to trust and ethics can also be addressed through better communication efforts. Robust methods developed from the field of cognitive behavioral psychology have proven effective in addressing these types of challenges and need to be more systematically applied to existing and emerging risk perceptions associated with advancing biotechnologies.

Public pushback can have incredible impact. Negative receptions to biotechnology products can result in an overly cautious regulatory approach to biotechnology that could harm the development of innovation in lieu of other countries’ facing fewer restrictions in pursuing innovative and lucrative technologies. From this perspective, the major threat to American national security is losing ground in terms of science and technology innovation capacity to other nations. The Wilson Center reports that the stakes in biosecurity are high, particularly in regards to ownership of various genetic engineering innovations (e.g., gene-editing patents). Losing ownership at early stage technology development can affect upstream knowledge-sharing and collaboration, and can also result in the U.S. having a less competitive edge in attracting research talent and private sector investment. To protect against these outcomes and to achieve the immense potential of genetically-engineered products, there must be acute regulatory efforts to address public perceptions of risks and to encourage the private sector and academia to continue innovating. Adapting ownership models and incentivizing information-sharing for improved biotech research collaborations is the best way to preserve security while maintaining public safety.

Biotech is a dual-use technology that has tremendous potential for both good and bad. If used appropriately, it can dramatically improve the human condition; but it also has the potential for more nefarious outcomes, such as disrupting food supplies and sickening large populations. Regardless, continued advancements in biotechnology are inevitable. We may wish for a world in which food was so abundant and people were so healthy that nobody would be interested in biotechnology. We may also wish for a world in which no one is interested in pursuing technologies with the potential to harm others. But that is not the world we inhabit. The current abundance of food is no guarantee against future scarcity, especially when we consider the risks of climate change. Human beings remain intensely interested in devising new ways to hurt each other. The U.S. cannot afford to absent itself from an area of research with such dire security implications. The combination of progress and prudence is the best that we can do.

Sweta Chakraborty, Ph.D., is Associate Director at the Institute on Science for Global Policy. The views expressed in this article of those of the author and do not necessarily reflect the views of the U.S. Army War College, U.S. Army, or Department of Defense.

For more on this topic, check out the following podcast episodes produced by ISGP’s “The Forum”:

Ep. 44: Honey, I Shrunk the Food Tech, on applying nanotechnology in the food system.

Ep. 9: The GMO Show, on the benefits and drawbacks of using genetically engineered foods to address global food insecurity.