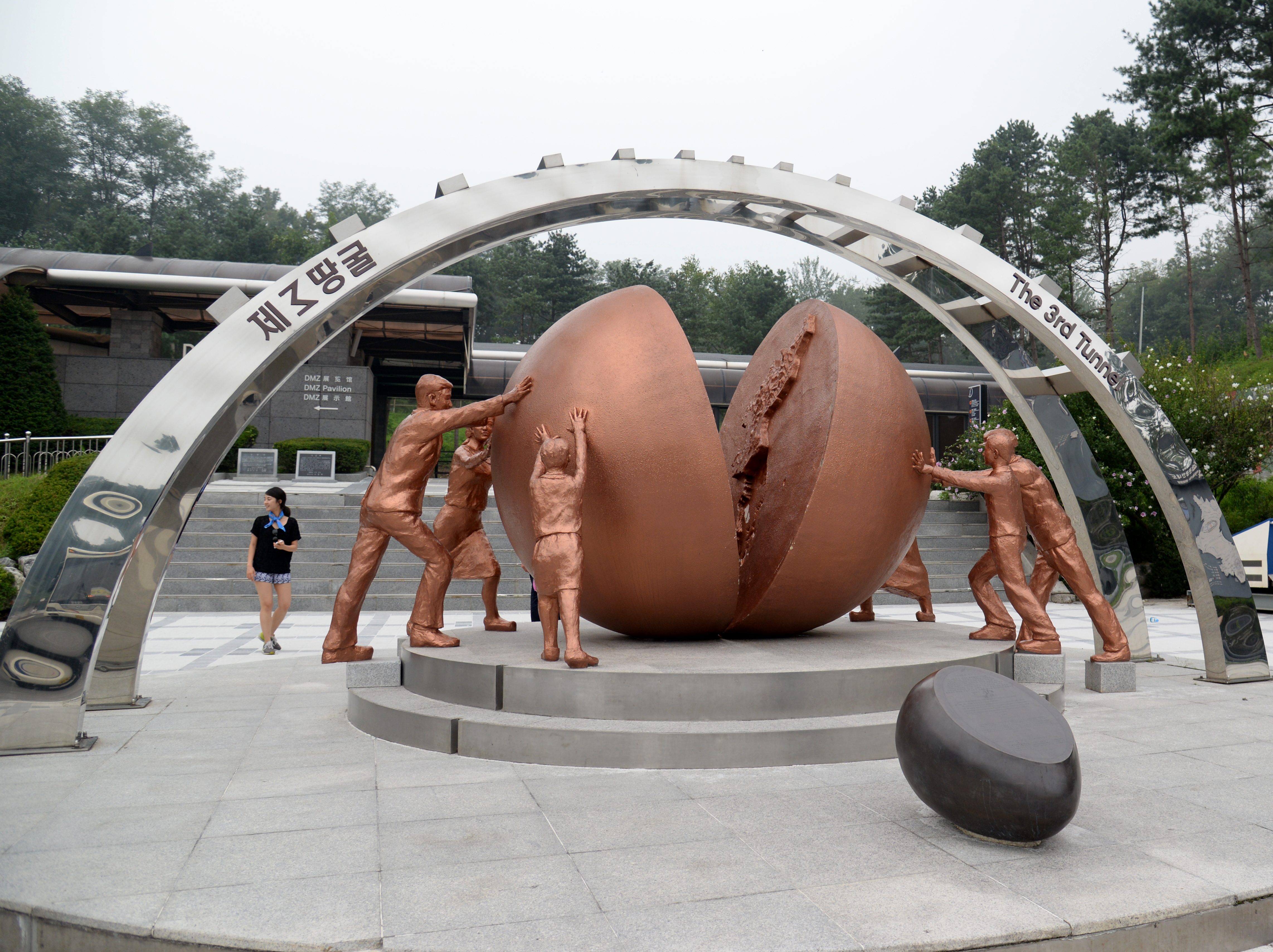 Reduced to its raw essence, foreign policy is still about the calculation of power. No more euphemisms. Blunt words backed by blunt power have to be the order of business from now until a real deal is reached.

The April 27, 2018 summit between South Korean President Moon Jae In and North Korean Chairman Kim Jong Un is forever recorded in the annals of history. Will it change the course of history? North Korea is the last frontier of the Cold War. If Trump is somehow able to completely denuclearize North Korea, then he will go down as one of the most consequential leaders in history.

But before we put Trump on the pedestal of history, and at the risk of crashing the party, let’s not gloss over an inconvenient fact: with or without nuclear weapons, North Korea remains one of the most repressive and criminal nations in the world. That it wields and threatens the world with nuclear weapons is more reason to despise it than to respect it. This is a regime that is currently governing, supervising, and operating a modern Holocaust, perpetrated against its own people. That it is not televised live on CNN does not make it untrue. What a grotesque use of that term to describe an ongoing situation in which real “lives” are being snuffed out “live.” Otto Warmbier and the millions of North Koreans who perished under the Kim family must be turning over in their graves.

There is an old English saying: “He who sups with the devil should bring a long spoon.” Aghast at Kim’s pomposity and the world’s conferring of legitimacy to his murderous regime, the hundreds of thousands who are currently languishing in Kim Jung Un’s gulags know just how long that spoon needs to be.

In the midst of a celebration, it seems improper to cast aspersions. Symbolic gestures are moving: an unexpected reaching out of a hand, stirring rhetoric that pulls at  the heart, tears that are the byproduct of decades-long division. However, other gestures are also powerful, like a middle finger, or a loaded gun – which essentially describe Trump’s Korean approach. Reduced to its raw essence, foreign policy is still about the calculation of power. No more euphemisms. Blunt words backed by blunt power have to be the order of business from now until a real deal is reached.

The U.S. has demanded, in Trumpian diplomatic speak, “get rid of all your nukes and I got a huge deal for ya. Open up every suspect site. Undergo intrusive verification with unlimited sampling or we walk, and you continue to face maximum pressure. It’s simple. Your nukes or your regime. Take it or leave it. You lose. I win.”

The timing seems to be the crux. The Trump administration is honing in on the word “immediate.” To be sure, phased negotiations have been tried before, with no success, because diplomacy was not adequately backed up with military force and diplomatic officials were too eager to attain a deal (see Banco Delta Asia). But an intrusive verification regime cannot be established immediately and certainly cannot produce results immediately. The sine qua non of verification is sampling and it takes time to gather, assess, and determine what activities have taken place in the past and what/if activities are taking place now, and in this regard, assess compliance with any agreement.

But if we set aside the question of immediate versus phased approaches, a larger picture emerges that may render the distinction moot. Whatever you think of Trump’s style and tone, his verbal bombast and military preparations for war have yielded the opportunity for peace. Presidents Johnson, Nixon, Ford, Carter, Reagan, Bush, Clinton, Bush, and Obama all failed to do what Trump is doing. Vegetius would approve. Kim Jong Un may make the right decision. But he won’t make that decision without the United States and its allies instilling fear. Hope comes and goes. Fear stubbornly stays.

Peace may indeed be possible, but the political credibility surrounding the peacemaking remains questionable. There is no South Korean equivalent to a Nixon who has the credentials and standing to go to China. There is no South Korean equivalent of a Thatcher who has the audacity and integrity to make the case for the supremacy of South Korea’s freedom, democracy, human rights, and capitalism. Moon put up no such defense of South Korea’s values.

Twenty years ago, in 1998, Chung Ju Yung, South Korea’s Andrew Carnegie, drove 500 head of cattle across the Demilitarized Zone (DMZ) between North and South Korea. But he had credibility. Chung was conservative by nature, a capitalist to his core, and a common man with an uncommon touch. Moon has none of these qualities. Rather, he groveled to a Panmunjom statement that smelled as if the South merely edited a statement written by the North. Moon agreed to cease, as of May 1, “hostile acts” such as “broadcasting through loudspeakers and distribution of leaflets.” But he received no written commitment from the North to make any similar concessions, such as withdrawing some artillery units near the DMZ. Reading the Joint Declaration, one gets the unsettling sense that South Korea is the one that has been engaging in hostile acts and is the obstacle to peace.

If the road to hell is paved with good intentions, then the road to denuclearization is littered with discarded promises and ephemeral hopes. The United States and South Korea must keep the knife at the North Korean throat while Pyongyang denuclearizes.

Trump has successfully pressured China by linking better relations with Washington in return for reining in North Korea. While the empty mantra of “China, China, China” has echoed in the halls of Foggy Bottom for the past three decades, no North Korea expert or policy official suggested that the United States bring its power to bear on China or to force China to actually do something meaningful. These so-called experts said “China is the key” while never turning the key. Trump did more than turn the key. He put the screws to them. Trump’s decisive actions proved that it was the “U.S., U.S., U.S.” all along.

I worry that our generation will be harshly judged by history for ignoring the plight of – and failing to liberate – North Korea’s slaves. Lest we forget, North Korea is a prison state with ICBMs.

This is the deal that Trump and anyone serious about North Korea can accept: no nuclear weapons in either North or South Korea. Thus, if North Korea collapses and South Korea absorbs it in unification, then there is no need for China to worry. In this vein, Japan will also not go nuclear. China won’t have to worry about the duality of a nuclear South Korea and a nuclear Japan. In return, China will have to continue to keep North Korea on a tight leash until complete denuclearization can be verified and confirmed. The United States may reward China with favorable trade deals in return.

While efforts to denuclearize are to be commended, I worry that our generation will be harshly judged by history for ignoring the plight of – and failing to liberate – North Korea’s slaves. Lest we forget, North Korea is a prison state with ICBMs.

The U.S. and its allies may or may not succeed in denuclearizing North Korea over the next few years. But this cannot absolve the denuclearization acolytes of their moral obtuseness regarding the human tragedy that is North Korea. If they can denuclearize the peninsula, it could be a first step to alleviating this human disaster rather than letting it go on. The advanced nations of both West and East share an ultimate dereliction of duty – the duty to their fellow human beings. If that does not unite the Left and the Right in any society, then what will?

Kim Jong Un resorted to some skillful rhetoric to tug at the hearts of Koreans to soften his image. In his remarks at Panmunjom, he repeatedly underscored the “oneness” of the two Koreas: “one blood, one brotherhood, one people.” Elsewhere, he cited “one bloodline, one language, one history, one culture.” George Orwell, in his 1940 review of Hitler’s Mein Kampf, warned about such appeals to “blood and soil” sentiments.

This is the deposit of my sour voice in the sweet soup of peace and reconciliation. But for me, the time has come, time to undo the folded lie.

No more promises to be reneged on. No more false hope. No more lying. Let’s hold North Korea to account. And let’s prepare to fight tonight.” The ultimate maximum pressure is war. Trump, Mattis, and Pompeo have never taken that option off the table despite the euphoria. For example, the deployment of the 3rd Battalion, 4th Marines  from 29 Palms to Camp Mujuk would send a strong signal that maximum pressure will be applied till the very end.

Such a stance may be just be enough to convince North Korea, once and for all, to come to its senses and join civilization and modernity, warts and all.

Origen of Alexandria said: “the power of choosing good and evil is within the reach of all.” Here’s to hoping that Kim chooses good over evil, and to being prepared to confront him if he does not.

Jinwoo Kim is an adjunct professor in Graduate School of Political Studies at Kyonggi University, Seoul, Republic of Korea. The views expressed in this article are those of the author and do not necessarily reflect those of the U.S. Army War College, U.S. Army, or Department of Defense.

Photo: A symbol of the efforts to re-unify the Korean peninsula is seen near the Demilitarized Zone in the Republic of Korea, Aug. 13, 2014. The site is one of many stops on a tour of the DMZ, and is also where visitors can walk through a portion of the third tunnel discovered to have been dug by members of the Democratic People’s Republic of Korea in an attempt to invade the ROK.