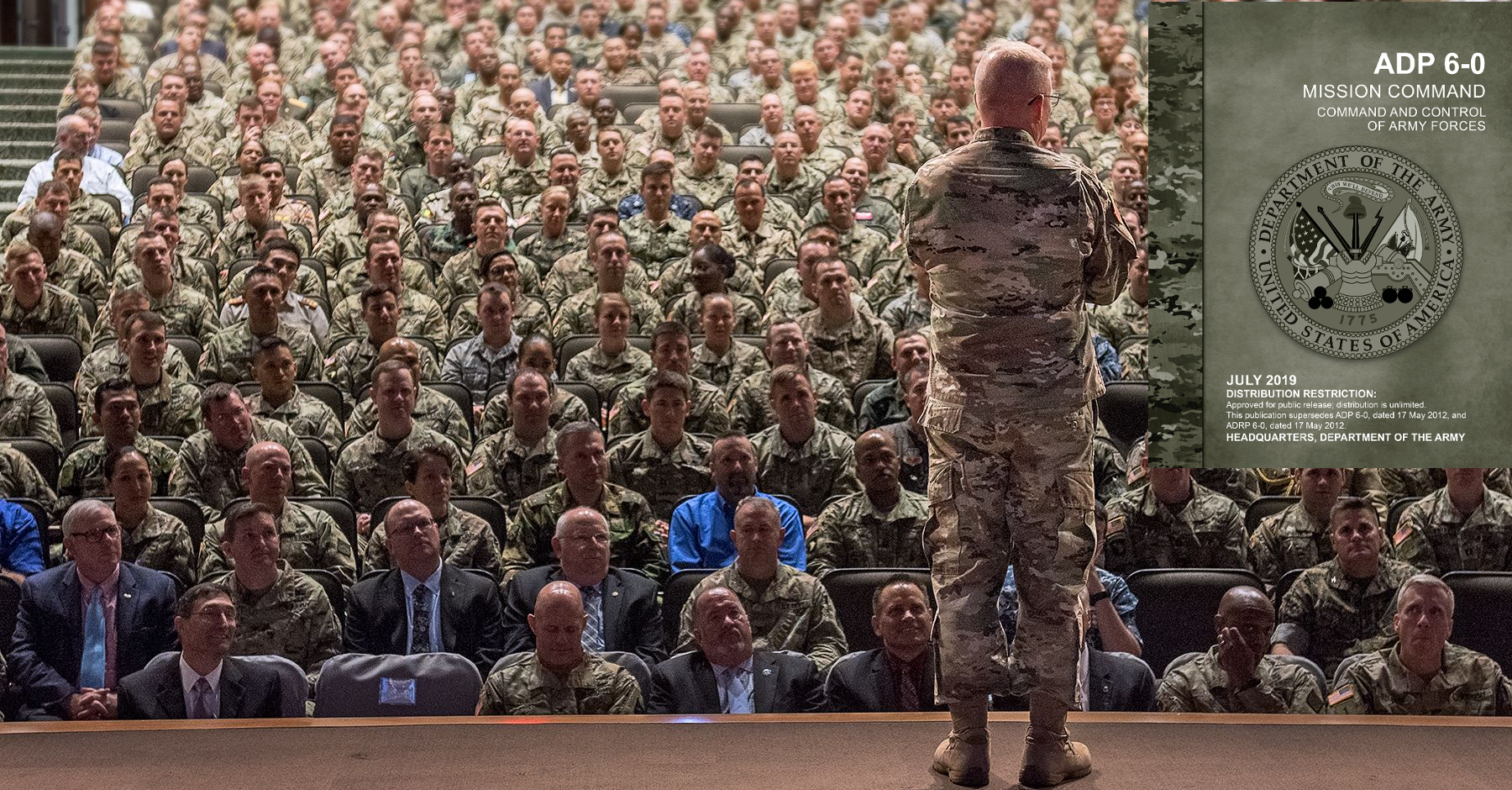 But is updating the doctrine sufficient to answer its critics? Persistent execution challenges may go beyond what any doctrine can address.

It is no secret that the U.S. Army has struggled to implement mission command in garrison or non-tactical environments since the rollout of the 2012 Army Doctrinal Publication (ADP) and Army Doctrinal Reference Publication (ADRP) 6-0, Mission Command. The authors confirmed this by analyzing 52 U.S. Army War College Strategy Research Projects related to mission command. Students identified overly bureaucratic garrison processes as one of the trends that inhibited mission command. In April 2019, General Stephen Townsend, Major General Douglas Crissman, and Major Kelly McCoy wrote, “Reinvigorating the Army Approach to Mission Command: It’s OK to ‘Run with Scissors,’” which highlighted the underlying and persistent issue of “garrison bureaucracy often [being] at odds with our Army’s mission command doctrine.” Their July 2019 follow-up, subtitled “Leading with Mission Command” with Major General Gary Brito, addressed the need to practice mission command daily, “whether in garrison, during training, or while deployed for operations around the world.” The recent publication in July 2019 of the updated ADP 6-0 Mission Command: Command and Control of Army Forces, shows the Army is moving forward in a new direction to address this problem.

But is updating the doctrine sufficient to answer its critics? Persistent execution challenges may go beyond what any doctrine can address. These challenges include a lack of trust and risk aversion engendered by bureaucracy, which hinder the application of mission command principles by Army leaders in garrison environments. Resolving these issues could allow the Army to make mission command something substantially valued by the force.

The updated language of ADP 6-0 still focuses the philosophy of mission command on the commander, who exercises formal leadership over his or her organization as expressed in Army Command Policy. The commander gives guidance, orders, and directs the staff. Yet, leaders in non-command positions, such as other officers and noncommissioned officers (NCOs) do the same. The Army’s leader development process for officers and NCOs prepares them to assume leadership positions in troop and staff assignments alike, including leading and directing subordinates to execute missions. The principles of mission command from ADP 6-0 (e.g., Competence; Mutual Trust; Shared Understanding; Commander’s Intent; Mission Orders; Disciplined Initiative; and Risk Acceptance) prescribe the ways commanders can most effectively accomplish the mission at all echelons from company/battery levels, to the enterprise level. Yet, these same principles also prescribe ways leaders who are not commanders can lead effectively.

Lack of Trust and Risk Aversion

The Army does not fully embrace mission command in garrison (or elsewhere) because leaders are risk averse and lack trust in their subordinates, and these pathologies only increase in garrison environments. A leader’s tolerance for risk decreases in a non-tactical environment. Why is this? Risk tolerance is related to control and judgement. In their article, “Trust: Implications for the Army Profession,” Charles D. Allen and William G. “Trey” Braun, III assert that the Army’s culture is heavily reliant on, and influenced by, control or the use of “…organizational procedures (policies and regulations) … for the common and greater good.” Typically, this interpretation of the greater good leans on the side of centralization and rigidity, and it lowers a leader’s risk.

Tom Guthrie’s article, “Mission Command: Do We Have the Stomach For What Is Really Required?” asks a hypothetical question: “When ‘bad’ things happen under mission command, will we feel the need to control the outcomes better by increasing the approval level on a particular issue?” The answer is unequivocally yes. When things go wrong, the Army’s instinct is to exert control, create a checklist, and make the entire chain of command approve similar issues. When opportunities to empower subordinates exist, leaders often prefer, or default to, retaining more control, creating systems and policies to address risk or leadership failures. Unfortunately, those systems and policies often limit or impede initiative and foment risk aversion, as leaders become more concerned with the negative consequences of noncompliance. The updated ADP 6-0 addresses this issue: “Employing the mission command approach during all garrison activities and training events is essential to creating the cultural foundation for its employment in high-risk environments.”  Yet, how are we to fix this problem?

Too many leaders, both soldiers and civilians, interpret mission command as principally applicable in combat, with little relevance to garrison environments.

Negative perceptions about subordinates’ competence can further erode trust between leaders and subordinates. Allen and Braun argue that lack of interpersonal trust is one of two major threats to the Army. Focus group interviews with commanders at the lieutenant colonel and colonel levels, as well as with senior noncommissioned officers (command sergeants major), revealed a perceived lack of trust and confidence in subordinate leaders’ expertise (knowledge, skills, and abilities) for garrison (home station) operations. These leaders cited a lack of experience among midgrade officers (captains and majors) and noncommissioned officers (staff sergeants through sergeants first class) required for competence in home station training. ADP 6-0 addresses the need for the commander to “continually assess the competence of their subordinates and their organizations. This assessment informs the degree of trust commanders have in their subordinates’ ability to execute mission orders in a decentralized fashion at acceptable levels of risk.”  These perceptions combined with rigid and bureaucratic policies and regulations cause many senior leaders to micromanage routine garrison tasks, as opposed to enabling disciplined initiative and empowering subordinates. The root cause may be attributed to the ever present but often unspoken risk to career.

For mission command to be successful, leaders must be comfortable letting go. In the field, this may be relatively simple, as leaders find it difficult to micromanage formations spread out across kilometers of battlespace. In garrison, however, where missions and people are more centralized, the tendency to over control is significant. If a leader is concerned that their subordinates’ failure will reflect badly on them, they may fall prey to this pattern. Leaders must fight this urge. Guthrie calls this “consciously abdicating the responsibility of the outcome to subordinates.” Things will always go wrong. It was the impetus behind the Elder Moltke’s often quoted “No plan survives first contact with the enemy.” If we are serious about implementing mission command, senior leaders must not crush subordinates when bad things happen. Of course, leaders must do the right thing, and negligence should neither be accepted nor overlooked. But the garrison environment should enable leaders at all levels to practice and encourage mission command.

The difference between the Army’s application of mission command in the field and in garrison is striking, and it is a problem. In the field, leaders are given wide latitude to make decisions, while in garrison, leaders rely on bureaucracy and managing systems. Consider the constraints on leaders to run a weapons range at home station, or even to travel for leisure, given the mandate that they complete a Travel Risk Planning System (TRiPS) worksheet before going. They must also verify mandatory training whenever they request mileage passes. (Of note, the U.S. Army is far from alone in its overzealous regulation in garrison. A British soldier, “Nick” writes about the “Erosion of Mission Command in Barracks” and describes the British military bureaucracy’s overregulation of government vehicles in garrison operations. Anyone who has ever signed out a U.S. government vehicle for official travel can relate.)

Mission command must become a 24-hour, 365-day mindset in the Army. Every leader must commit to executing mission command in the field, in training, and in garrison, and whether they are in command or not. Leaders must not “put on” mission command only when signing their weapon out of the arms room or snapping on a helmet’s chinstrap. Using a mission command philosophy must be second nature. As stated in Townsend et al’s article, “[g]ood leaders practice mission command daily, continuously applying its principles during everything their units do in order to maximize the repetitions essential for making the principles second nature to everyone on the team.”

While leaders apply mission command across the Army in different units and formations, the amount of control shifts, based on the level of training, experience, and competence of leaders, soldiers, and civilians. Imagine two infantry companies. Both company commanders rely on mission command, but one commander encourages autonomy among his subordinate leaders and their platoons due to their experience and competence. The second company commander maintains greater control because her subordinate leaders lack experience and she has some doubts about their competence due to the complexity of the mission. This difference is OK. It wouldn’t be mission command if every situation demanded the same judgement. Each leader, however, must communicate with their subordinates on the “why” to create shared understanding and to build trust.

In any environment, senior leaders must empower their subordinates and model the principles of mission command. They must ruthlessly eliminate over-control or micro-management from their behavior. And if centralization is required, they must explain why. In Todd South’s recent article, “How changes to mission command will mean soldiers taking risks and taking charge on complex battlefields,” he quotes General Townsend as saying, “[t]here’s too much top down direction, too much philosophy of compliance in mission command.” Just as important as shared understanding and empowerment is trust.

Trust is the basis of all cohesion in the Army. The new ADP 6-0 states. “Mutual trust is essential to successful mission command,” and continues “Subordinates are more willing to exercise initiative when they believe their commander trusts them. They will also be more willing to exercise initiative if they believe their commander will accept and support the outcome of their decisions. Likewise, commanders delegate greater authority to subordinates who have demonstrated tactical and technical competency and whose judgment they trust.” If the goal is to truly to build cohesive teams through mutual trust, all leaders, not just commanders, must actively embrace using the principles of mission command. In “Cutting Our Feet to Fit the Shoes: An Analysis of Mission Command in the U.S. Army,” Army major Amos C. Fox writes, “[r]egardless of the method of command and control stated in doctrine, commanders have always and will always evaluate their units and subordinates based on how much they trust them.” By using the principles of mission command in the garrison environment, leaders will reinforce its use and inculcate it in all the Army does.

Doug Orsi and Bobby Mundell are both retired Army Colonels, currently supporting the Center For Strategic Leadership, U.S. Army War College. The views expressed in this article are those of the authors and do not necessarily reflect those of U.S Southern Command, U.S. Army, or Department of Defense.

Photo Description: Lt. Gen. Mike Lundy, Commanding General of the U.S. Army Combined Arms Center and Fort Leavenworth, Kansas and Commandant of CGSC, hosted the address and Q&A session with the Command and General Staff College (CGSC) class of 2018 on Aug. 14, 2017 and the Lewis and Clark Center, Fort Leavenworth, KS.