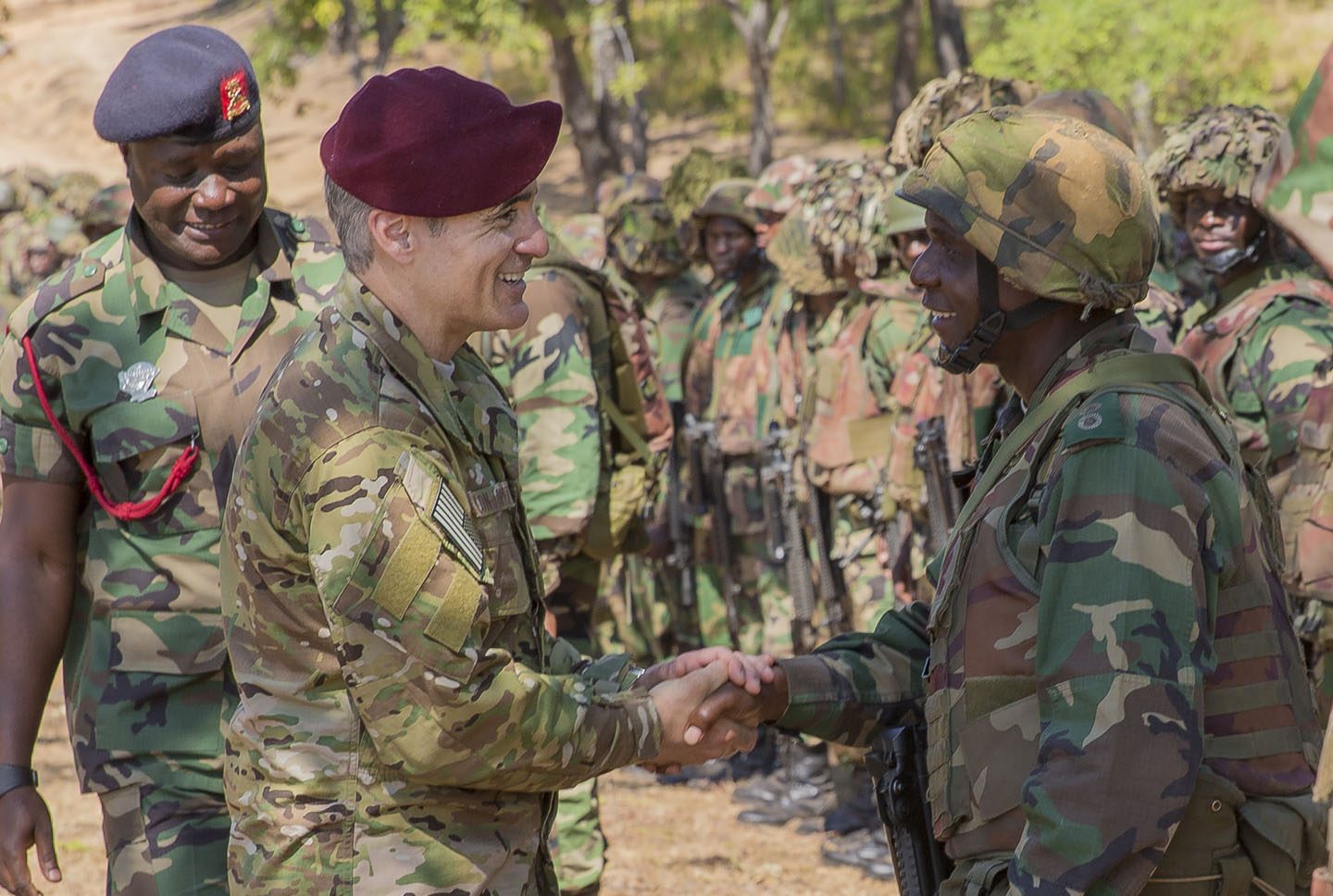 The Trump Administration’s new “Africa Strategy” has gotten a lot of press, much of it negative, since National Security Advisor John Bolton announced it on December 13th, 2018 at the Heritage Foundation in Washington, D.C.  The first comment that the announcement warrants is something almost no one seems to have pointed out.  Namely, the new strategy seems far less a “strategy” and much more akin to a “philosophy” for engagement in Africa, one which Africans should take notice of if they want cooperation with Washington.

The new strategy came with no funding proposals or requests, no executive orders or proposed legislation to facilitate the purported desire to partner with regional organizations and – thus far – no published strategy publicly available.  We have only Ambassador Bolton’s speech.  Consequently, the cavalcade of negative commentary is premature and most of it is overly focused on China.  This is understandable, given the administration seems to have sought to draw everyone’s attention in that direction.  But in focusing on China, analysts, academics, politicians, intellectuals and businessmen are missing several key points Bolton made which should put folks on notice regarding U.S. engagement in Africa’s economic, development, security and political matters.

(2)  Countering the threat from radical Islamic terrorism and violent conflict.

None of these ideas is new or unique.  All have been the focus of U.S. foreign policy in Africa over the past three administrations.  The differences have been in how each administration prioritized them.  While U.S. government officials often herald investment, little of our foreign policy has focused on U.S. commercial interest (or lack thereof) in Africa.  Too, the intense focus on calling out China (mentioned 14 times in Bolton’s speech) and Russia simply reframes policy for Africa.  But has it really changed?  We shall see.

Buried in the details and the “great power competition” narrative are things African should take note of and consider carefully in their diplomatic dealings with the U.S.  First and foremost, rightly or wrongly, the Trump administration has laid down a marker and made it clear that it views China’s behavior in Africa as a “net negative and contrary to U.S. national security interests.”  But Africans need not pick sides.  Contrary to the panicky alarm so many anti-Trump knee jerkers have portrayed, this is not a Cold War bipolar world.  However, it does mean that the African Union and national capitals should not be surprised if or when Washington makes decisions based on its perceived competition with Beijing.  Prudent planning and diplomacy can keep astute Africans from being trampled on.  Africans can profit from this purported “great power” rivalry, as both Beijing and Washington jockey for access or influence.

As far as the missed points in Bolton’s speech, there are several.  “Prosper Africa” remained unexplained or detailed in the speech.  Yet, the concept is intriguing and could offer the prospect of a potential mechanism to improve trade and investment from the U.S.  However, until there is more (or any) detail, speculation is pointless.  The key is to anticipate and be prepared to react to Prosper Africa.  Hopefully it will be more substantive than the mere middle man role President Obama’s “Power Africa” became.

Perhaps the most obvious point observers chose to ignore is that the U.S. bilateral security assistance and cooperation will be with “responsible regional stakeholders.”  This should be welcome news for Uganda and Niger, two of the most prominent and enduring U.S. partners over the past decade.  Kampala has been the key partner in Somalia, hunting Joseph Kony and in its unilateral intervention in South Sudan which averted a likely genocide.  Niger, under resourced and overwhelmed with smugglers, radical Islamists and many other security challenges, has been the key U.S. partner in the Sahel, as Washington belatedly entered the fray after development and governance efforts proved ineffective or at least inefficient at preventing the encroachment of Islamists in the Sahel.  Reliable regional security partners would appear to now be the likely winners from the new strategy.  In other words, those who share common security interests and act responsibly will garner the lion’s share of security money, others will have to be satisfied with the scraps.

Bolton also noted that U.S. assistance will go to countries that “invest in health and education, encourage accountable and transparent governance, support fiscal transparency and promote the rule of law.”  It is helpful that the strategy includes these qualifications.  However, this is already the stated standard and expectation.  These ideas dominate qualification for the advantageous Africa Growth and Opportunity Act (AGOA), which allows duty free exports to the U.S. for countries that ostensibly meet these standards.  While Zimbabwe should not expect any additional help, this changes little for most of the continent; essentially it is likely business as usual in practice.

For Africans paying attention, the most alarming comment had to have been about trade.  Bolton called for pursuing “modern, comprehensive trade agreements on the continent that ensure fair and reciprocal exchange.” Why should this be of concern?  The first concern is that despite a concerted African effort to at least approach trade on a regional or multi-lateral basis across the continent with regional economic communities, regional and now continental trade pacts, the Trump administration stated a preference for bilateral agreements.  This runs counter to a decades long process on the part of the African Union and African states for regional pacts.  Next, the words “modern” and “reciprocal” ought to scare Africans.  Modern is likely a reference to patent and trademark protections as well as digital content.  Few African states are positioned to comply with coming demands in this sphere.  Consequently, failure to live up to agreements could mean future trade difficulties with the U.S.

Today 40 African countries receive preferential trade status under AGOA and export up to 6,800 lines goods and services to the U.S. duty free. However, AGOA does not require them to allow duty free entry to their markets for U.S. goods and services.  Bolton’s comment now throws into question the long-term viability of AGOA.  One could reasonably take reciprocity to mean no tariffs for U.S. exports to Africa. This would prove disastrous for some smaller African countries.

Principled, rational positions in opposition to the U.S. are unlikely to be grounds for halting assistance

Ambassador Bolton stated that the U.S. is pleased when regional organizations take responsibility for peace and security in their neighborhoods.  His example was the G-5 Sahel, which the ambassador specifically highlighted as a good example of what a regional organization can achieve and which the Trump administration will work with to help achieve success in peace and security.  If true, this would be the opposite of the strategy’s approach to trade which it insists should be bilateral.  The regional organization approach, if taken, could be a promising development.  However, the Department of State and U.S. Government have long sang this same song, promoting regional integration in Africa while practicing bilateral diplomacy as the norm.  To date, there has been limited interaction by the U.S. diplomatically with the G-5 Sahel since its formation in 2012.

For successful African countries approaching “graduation” from low to middle income status, the new strategy may prove disappointing as they will likely lose U.S. assistance.  In the new millennium Botswana achieved middle income status and promptly lost much U.S. assistance.  The loss was far from benign and not on a graduated basis.  The irony with this approach is that without a gradual decline, a successful country is essentially punished for its good governance and sound macroeconomic policy with the loss of aid.  Also, those whom Washington deems as making “poor” policy choices (an undefined description) will lose foreign assistance.  This is not an unreasonable outcome.

Finally, the new strategy directly warns countries who use international fora to act against the U.S. and its interests.  While some will perceive this as a threat to get states to back U.S. positions on a quid pro quo basis, I do not see it in that light.  Principled, rational positions in opposition to the U.S. are unlikely to be grounds for halting assistance.  Rather, recipients who consistently oppose the U.S. with little legitimate basis will likely see U.S. assistance dwindle.  While some may argue this is unfair, I ask you, why should the U.S. play the role of rube and support politicians, helping them to remain in power by funding their development when they take political positions contrary to U.S. national interests?

China may get all the ink following Ambassador Bolton’s announcement of a new Africa Strategy, but the things that ought to interest Africans have far less to do with “great power” competition and more to do with bilateral U.S. individual African state relationships.  The U.S. has long been the largest donor for Africa.  Between 1995 and 2013 about $97.67 billion in foreign aid was committed to sub-Saharan Africa.  Folks may suddenly be in love with Beijing because they perceive it to be the big donor, but the scale is new and is largely a consequence of a rapacious Chinese need for raw materials, an outlet for excess capital and engineering expertise and the lending of money (debt, vice grant aid).  It remains to be seen how helpful cooperation with Beijing will prove to be for the people of Africa.  Africans should look to external actors for foreign direct investment and technical assistance.  However, they should do so with a clear vision and not wear blinders.

China is not the story here.  The story here is a stated position that those who work with Washington on things in their mutual interests, those who adhere to good governance, those who are helpful, reliable regional partners and those who do not actively work against the interests of the U.S. will be the ones who receive the bulk of U.S. assistance in Africa.  Bolton’s comments are clear.  The message Africans should get is not about China, but rather about shared interests, good governance and a new desire for trade between the U.S. and Africa.  The question of course is, which Africans are willing to work with the U.S. under these terms?