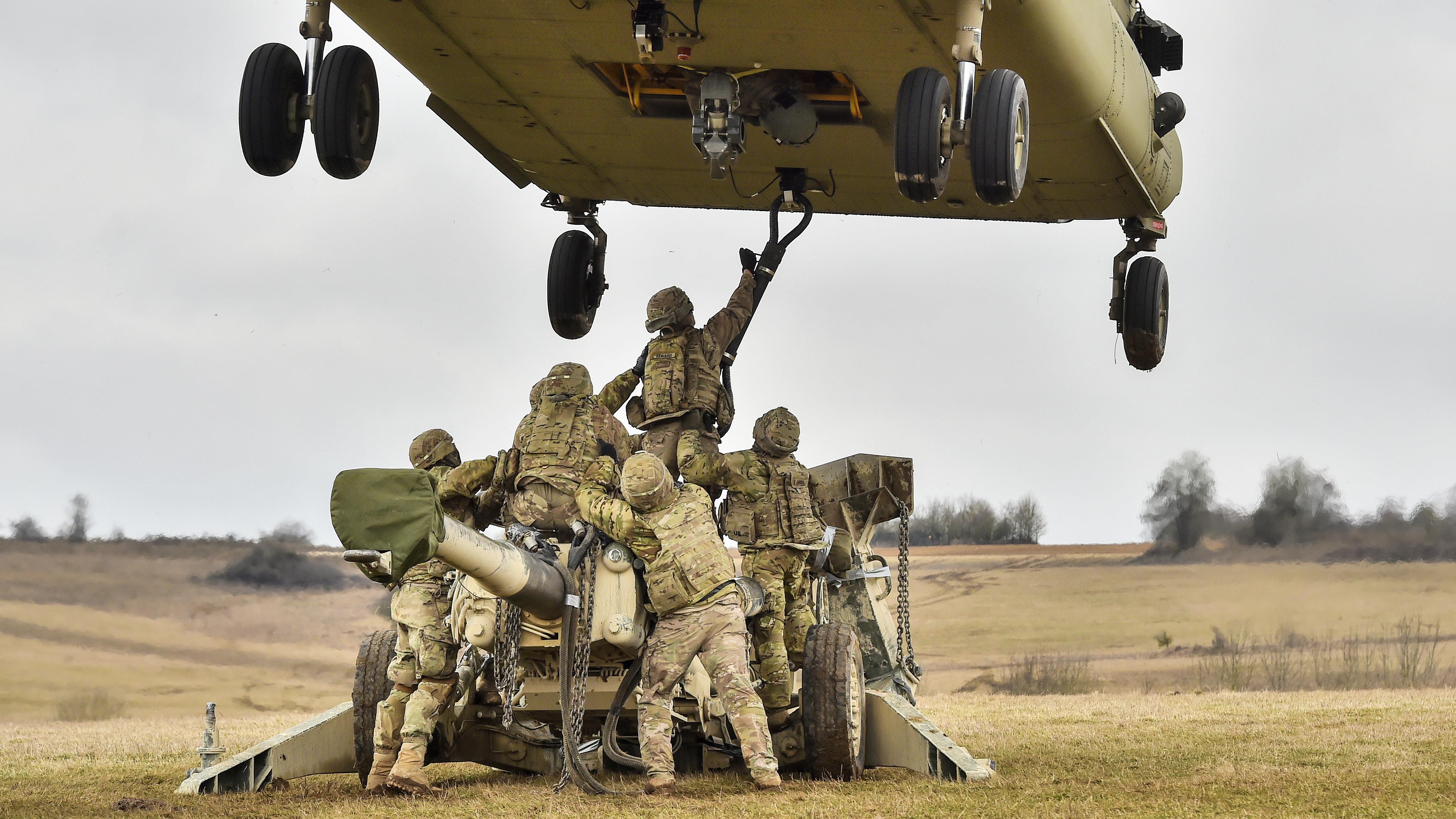 As long as the U.S. military approaches the application of military forces from the fractured perspective of discrete domains, then true integration will be stunted.

How do you effectively integrate military forces operating in the different “domains” (e.g., land, air, sea, etc.) of war? This question has obsessed the U.S. military for a long time, and has decisively influenced the most significant defense reforms since WWII. Historically, military technology advances (especially naval and aviation) have created greater specialization needs within military organizations. Increasing domain-specific capabilities generally makes operational integration of those capabilities more challenging; thus the military’s perpetual struggle: to maintain highly-capable, domain-centric forces that are at the same time able to work together effectively. However, in a world in which computers can fly, sail, drive, and shoot, technological advances are making the limitations which prompted military specialization less and less relevant to the emerging context of war, leaving the U.S. military at increasing risk of failure through its perpetuation of structures and processes based on the outdated constraints of human specialization. The U.S. military must achieve continuity of action that puts the shattered Humpty Dumpty of the joint force back together again through whole-domain integration that reimagines the organizational design of military forces, to support fast and effective information processing and the extension of the authority to act on that information.

A current solution to the integration problem is “multi-domain battle”, which seeks to achieve “cross-domain synergy” that projects power across multiple domains to decisively defeat an adversary. However, the U.S. military is approaching the problem from a domain-centric perspective that creates self-imposed boundaries and makes the integration it seeks much more elusive. The U.S. military is on the verge of revolutionary advances in artificial intelligence (AI) and automation championed by the Third Offset Strategy that will make the current approach to effective domain integration about as sensible as efforts to improve the efficiency of sails for steam-powered ships. Rather than seek the asymmetric advantages of domain-centric forces’ affecting one domain from another, the U.S. military must embrace cross-domain synergy that takes advantage of whole-domain expertise and integration at lower levels and operates at a tempo that is quick enough to exploit fleeting opportunities to disrupt enemy systems.

Discrete domains do not exist in the continuity of nature. To hunt in the air, on the land, or in the water, an eagle seamlessly integrates domains because its information processing is unified. It has one mind that decides how it functions in three different physical environments, and it intuitively grasps its capabilities and limitations in all of them. Humans created domain-centric approaches to warfare to compensate for cognitive and physical limitations, which make it impossible for any individual to be expert at everything. To prepare for and conduct warfare, humans subdivided complex tasks into smaller areas, and allowed groups to specialize — through expertise — within a more narrowly-defined realm such as land, sea, or air. The advantages gained by creating separate domains out of nature’s continuity also created the challenge of putting them back together during joint military operations.

As long as the U.S. military approaches the application of military forces from the fractured perspective of discrete domains, then true integration will be stunted. Domain-centric integration (i.e., integration from the starting point of combining the activities of domain-focused organizations) is like trying to put the pieces of Humpty Dumpty back into their original positions without fixing the cracks — superficially functional but flawed where it matters most.  The true opportunity is to reintegrate the discrete domain expertise humans created in a way that approaches the underlying continuity of war, to make the application of military forces whole again.

To understand how the U.S. military can achieve better continuity across the domains of war, consider organizations as information-processing entities. In his book, Organizational Design, Jay Galbraith explains that the structures of competitive organizations like the military develop to handle the information-processing requirements of effective decisions. Organizational structures are developed to compensate for people’s limited ability to process the tremendous amount of information that competitive decisions require.

The joint force was designed this way because concepts for most military operation centers were developed based on 1970s information technology, when it was only at the operational level that enough minds could be assembled with the available computing tools to achieve the information processing required. For example, the Air Operations Center (AOC) in use today is one of multiple examples in each of the services of an organizational structure developed under the information processing constraints of the past. The AOC’s structure was designed around limitations that existed nearly 40 years ago, when AirLand Battle doctrine was developed. Given the technological capabilities at the time, decisions made at the operational level, on a 72-hour timeline, were the best way to satisfy the information processing requirements of the competitive environment. Units at the tactical level simply did not have the capacity to transfer, process, and make decisions using all the information necessary for situational understanding of the entire mission. Bringing information up to the operational level also slowed the decision tempo to a manageable rate.

Discrete domains do not exist in the continuity of nature… Humans created domain-centric approaches to warfare to compensate for cognitive and physical limitations.

In recent decades, technology has changed dramatically, but our organizational construct has not. Information storage, communication capacity, and processing capability are advancing rapidly. These changes have major implications for outdated organizational designs and decision-making constructs. As the amount of information increases and the time available to process it decreases, our processing capacity and tempo must increase if we are to remain competitive. One response to this challenge is mission command, which seeks to accelerate decision-making by releasing more freedom of action to tactical decision-makers. Yet mission command is primarily about decision-making based on authority within existing domains.

Improving decision speed and quality is a primary focus of the Third Offset Strategy to arrest declining U.S. military superiority through advances in technology, and through the new operational and organizational constructs that they support. However, the Third Offset remains conceptually limited by the traditional notions of domains and decision-making. Meaningful combat integration supported by domain-bridging decision authority is still at the operational level.

The kludge of “jointness” is no longer the best we can do. The premise for domain-centric services — the information processing limitations of humans — is now open to question [as AI improves]. Military integration should not start with the challenge of synchronizing at the operational level the activities of domain-optimized services. Instead, tactical integration must be the starting point, joining domain information capabilities with the authority to take all-domain action at the time and place necessary to achieve military objectives. This is not cross-domain synergy in multi-domain battle. It sets aside “synergy” altogether, achieving organic continuity through whole-domain reintegration along the natural spectrum of competition and conflict.

Let us consider a brief example of how this could be achieved using current-day technology and information processing tools. A battalion battle group could be empowered to operate semi-autonomously across the domains with just the mission intent from a higher-level commander and the authority to make all-domain decisions at the tactical level. This small group could be organized to include a minimal force of mobile air defense, cyber forces, electronic warfare forces, small data-link capable surveillance drones, strike capable drones, artillery, armor, infantry fighting vehicles, and infantry. By creating an all-domain unit with appropriate information-processing capability and authority for its commander to make domain-bridging decisions at the tactical level, the targeting cycle to find, fix, and finish multiple battalions of combat vehicles and soldiers could take less than 10 minutes. Such continuity is found today in the Donbas region of Ukraine, where Russian units fight at a tempo alarmingly faster than the 72 hours required by the outdated organizational and decision-making constructs still embraced by the U.S. military.

Advances in AI and information systems have significantly reduced the cognitive constraints that shaped domain-centric divisions of the joint force and decision-making. The continuity of Russian actions in the Donbas region indicates that integration at lower levels is a harbinger of warfare to come. AI, human-machine pairing and automation mitigate or circumvent the limits of human cognitive capacity. Units at lower levels will have an increased capacity to simultaneously gather, transfer, and process information that allows rapid decision-making across domains, seamlessly connecting domain-centric, tactical actions to the operational or strategic “big picture”.

In its ongoing attempts to put Humpty Dumpty back together again, the U.S. military has progressed through notions of military arms that were disconnected, deconflicted, coordinated, combined, and then joint.  However, these approaches inevitably limited the effective integration of information processing and decision-making, placing the U.S military at a disadvantage. The effective use of automation and AI systems now under development requires an entirely different concept of organization — in essence, a higher form of jointness (that expresses itself at lower levels of the organization). The U.S. military must create organizational structures that optimize military organizations’ information processing and decisions to achieve organic integration and authority at the lowest possible level.

Each military service has focused a great deal of effort toward improving its level of expertise and the domain-centric instruments it wields. Unfortunately, less effort has been applied to individual responsibility, authorities, and decision-making, and to the associated organizational structures that mirror the natural continuity of conflict. This requires objective consideration of the following three areas:

All-Domain Organizations: Revolutionary information processing capability enables organizations structured to process information to make decisions in a different manner. Hierarchical, top-down, command structures will give way to a more open architecture in which cognitive capacity and decision-making is shared with all levels, not concentrated at the top. Rather than pull cross-domain decisions up to the operational level, smaller units comprised of elements from the relevant services will make decisions at a much higher tempo, much closer to the point of execution, and advances in information processing will allow for the creation of semi-autonomous, all-domain teams.

All-Domain Officers: Automation, AI, and human-machine pairing are redefining the significance of human cognitive limitations. As these definitions change, so must our approach to specialization and the development of expertise. The joint force will come closer to defining officers not by their domain of expertise but as officers able to operate at an acceptable level in all of them – technology will carry humans beyond their domain-centric limitations.

All-Domain Authority: The effect of all-domain teams led by all-domain officers will be very similar to the organizational and command structures the U.S. military uses today, unless mission command is not constrained by domain-centric authority. In the past, the cost of making cross-domain decisions below the operational level was too high, but technology has reduced the informational costs at all levels and authority can now be pushed lower. Officers will only attain all-domain characteristics when they have the authority to make decisions and take action at their level across the continuity of competition and conflict — continuity of action cannot exist without continuity of authority.

Moving beyond current thinking about: how to get forces to operate in a domain in which others are expert; who targets for whom; or who provides fires for whom, requires thinking differently about cross-domain synergy. It requires accepting up front the notion of whole-domain joint force reintegration and focuses instead on the level at which the reintegration should occur. As “all the king’s horses and all the king’s men” attempt to put the joint force back together again, they should concentrate on where and by whom the technological advances envisioned in the Third Offset Strategy will allow information to be processed and decisions to be made.