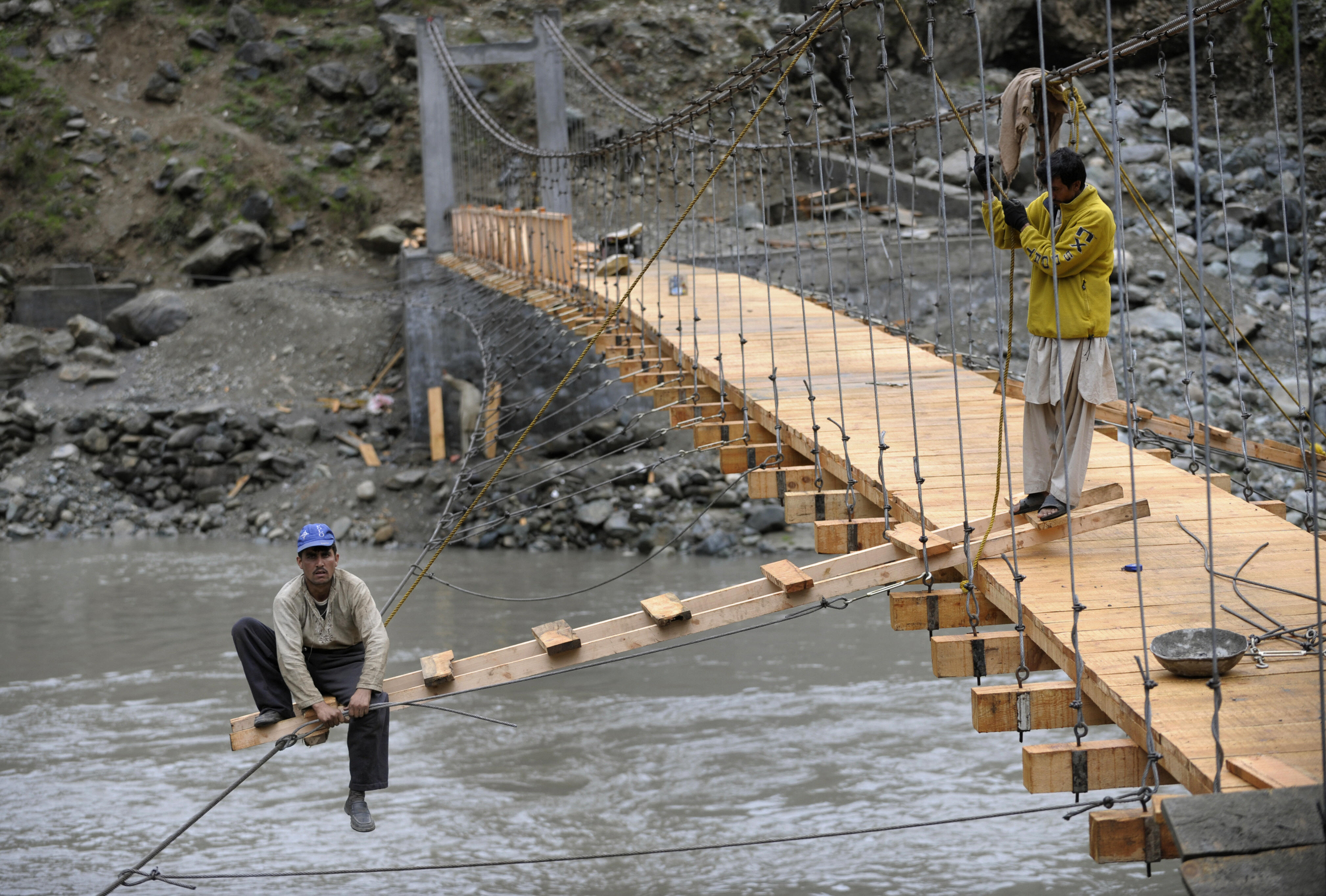 Successful international development requires the persistent, intelligent, and adaptive application of a broad set of government tools … and support from local populations.

In Norse mythology, Thor’s hammer is a legendary weapon that crushes the enemies of the Aesir (the Norse pantheon), and protects Asgard. The U.S. military is a modern Thor’s hammer, able to crush its enemies and protect the nation and its allies. However, such a tool is not always sufficient, and the combination of its power and ease of use may create some disadvantages. The psychologist Abraham Maslow famously observed, “It is tempting, if the only tool you have is a hammer, to treat everything as if it were a nail.” Predictably, as the United States has sought to solve problems in the international environment, it has seen lots of problems that look like nails, wielding the military instrument in many areas requiring a more balanced approach. Yes, military power can influence and shape the environment, however, achieving the political objectives of military interventions requires the intelligent application of other instruments of power. For example, real, lasting victory in the Second World War was achieved through massive U.S. investment in reconstruction, economic development, and political stability in Western Europe and Japan.

One could argue that budget cuts to the Department of State do not threaten U.S. reconstruction capabilities, since the U.S. military is organized and equipped to meet the nation’s needs. Note that “reconstruction” in the sense of the post-Civil War occupation of the southern United States refers to a broad set of activities that include stability operations, physical reconstruction, and economic development. Used here, however, the term reconstruction refers to, “the process of rebuilding degraded, damaged, or destroyed political, socioeconomic, and physical infrastructure of a country or territory to create the foundation for long-term development.” Military engineers have worked extensively for more than a decade on reconstruction efforts in Iraq and Afghanistan. The preponderance of personnel has come from Defense, in the form of program or project managers, contracting officers, logisticians, and engineers. In many respects, the U.S. military is well-suited to lead reconstruction in conflict areas.

First, the military has a flexible force with worldwide reach. Military personnel are accustomed to deploying to dangerous environments with little notice, and to following orders and pursuing stated objectives with utmost diligence. Military engineers pursue clear objectives and are trained in project management. Furthermore, the military can integrate security and development work, an important consideration in complex, violent environments.

Second, even by conservative estimates, the military’s combined capital and manpower resources for large-scale construction and project management missions abroad exceed those of any other government agency. Former Secretary of Defense Robert Gates reportedly said that the U.S. military had more band members than the State Department had diplomats. The comparison was not too far off. USAID’s numbers are even lower, and dwindling.

Given the military’s engineering flexibility and mass, it may seem to meet almost any strategically significant reconstruction needs, whether in peace or war. However, successful international reconstruction missions that complement future development are not just about speed and mass. Success requires the persistent, intelligent, and adaptive application of a broad set of government tools, in addition to long-term cooperation with, and support from, local populations. Managing these sustained efforts is easier with continuity in political relationships, and requires deep cultural and political understanding. For all its virtues, the U.S. military is not designed to provide those things. Indeed, one could argue that the military’s personnel system, with its frequent personnel rotations, is designed to provide anything but continuity and sustained coherence.

The need for developmental persistence built on political and cultural understanding seems to be a good argument that the U.S. Department of State and USAID should lead reconstruction efforts once violence falls to acceptable levels. The U.S. Department of State claims its primary responsibility, “is to fight terrorism, protect U.S. interests abroad, and implement foreign policy initiatives while building a freer, prosperous and secure world.” The key words are “building a freer, prosperous and secure world,” all of which relate to reconstruction efforts. Who is better suited to conduct foreign infrastructure investment and execution — the military engineer, or the diplomat? A dedicated, experienced representative of the Department of State or USAID understands the long-term strategic goals, the local political and cultural milieu, and the interactions of the various elements of American power. He or she is also far more likely to remain in the area for an extended period, and therefore to live with the consequences of developmental choices. Department of State personnel can gather an array of interested organizations, and tend to be more skilled in harmonizing, discussing, and building the consensus required for effective interagency, multinational efforts. In fact, certain non-governmental organizations prefer to work without military involvement. Lest this seem like a knock against the military, U.S. military doctrine explicitly acknowledges the advantages of the State Department in these areas. Joint doctrine publication JP-1 states that “the military provides support to [the Department of State] to assist its relief and reconstruction efforts.” The “its” clearly refers to the Department of State’s relief and reconstruction efforts. The military played a supporting role in America’s greatest developmental successes. The primary use of the U.S. military after World War II was to establish security and to provide for a smooth transition to civilian control of government. This enabled the civilian-led Organization for European Economic Cooperation (OEEC) to execute funding provided by the Marshall Plan.

U.S. leaders must determine the desired outcomes of any military intervention and fund the right agencies to lead any reconstruction efforts.

Unfortunately, the Department of State is not resourced to be successful in leading reconstruction efforts alone. Its mission statement is broad and ambitious for the roughly 8,000 diplomats who conduct American diplomacy around the world. In addition, Department of State personnel do not have the capacity in project management experience and the contracting avenues to execute major reconstruction efforts. This resource shortfall has created a need for developmental capability that the military has predictably filled in Iraq, Afghanistan, and elsewhere. However, the results of development efforts in Afghanistan and Iraq suggest that the nails that the military has been hammering may not be sufficient to generate the desired outcomes.

The U.S. government needs to transform how it manages development in conflict areas. It needs a new approach to resourcing which exploits a wider array of capabilities across more government entities, and which increases funds for the Department of State and USAID to lead these efforts. To aid successful reconstruction efforts in today’s political environment, I offer five recommendations:

First, political and economic goals must be an explicit element of any military intervention involving development. U.S. leaders must prescribe a clear objective for foreign national reconstruction efforts. Policymakers have some idea, however preliminary, of what success looks like once major combat operations cease. The past 50 years of American military interventions have made it clear that the destruction of enemy military forces is rarely sufficient to achieve the political objectives of war. More is needed. What does success look like? Is it simply a reversion to pre-military intervention chaos and violence? Is it the creation of a vibrant economy supported by a liberal political system that expresses U.S. values? Or is it something in between? Having a clearer sense of the answers to these questions is vital before reconstruction efforts begin.

Second, cooperation with the local population and government is essential. U.S. military interventions are almost inevitably “away games,” and sustainable political outcomes require support from those who have the strongest long-term commitment to the area — the local population. The Department of State has strong frameworks for building support locally and it must be resourced to enhance support in the affected nation’s government, and to elicit sufficient cooperation to sustain reconstruction efforts long-term. The ultimate goal is transferring responsibility to the host nation. This provides the indigenous government more of a stake in the decision process and overall end state. Long-term economic and political stability cannot be achieved without the involvement of the local population. This is much easier to say than to do, as 60 years of the West’s development investments in Africa attest. Yet the post-9/11 scale of U.S. military infrastructure and other spending in Iraq and Afghanistan dwarfs U.S. development efforts elsewhere over the same period. It would be hard to argue that, given the same resources and the same strategic objectives, the Department of State would have been less effective.

Third, U.S. policymakers must understand the role of time in successful development. America led positive development efforts in Japan, South Korea, and West Germany; all of which required multi-decade commitments. Of course, not all nations will warrant such lengthy commitments — sometimes, blowing stuff up and going home is the best we can do. Nevertheless, when our objective is, “a better peace,” more is often needed. Sustainable political outcomes often require a long-term commitment by the U.S., without a clear picture of the conditions that will allow the nation to end that commitment, much less a way to achieve those conditions.

Fourth, the Department of State must be resourced sufficiently in program management. This will require a resource increase for the Department of State, to ensure that a robust team can be assembled and deployed when necessary. In addition, USAID must be resourced appropriately in project and contract management to expertly deal with large-scale reconstruction efforts. Long-term international development operates in an environment with many non-governmental organizations, each with their own motivations and interests, and with no centralized command and control. Therefore, the U.S. Government must have personnel who are experts in reconstruction efforts, with knowledge of the resources, processes, and political requirements of successful development. This requires additional manpower for the Department of State, specifically in program management and execution. The cost of this could be offset through reductions in both military and civilian positions from the 110,000 defense engineer positions, potentially with no net cost increases or impact to military readiness.

Finally, if reconstruction efforts are necessary in a non-permissive environment, U.S. military leadership of reconstruction operations should be limited to those conditions in which security problems absolutely preclude Department of State control. Once violence is reduced to acceptable levels (which may remain high by Western standards), the State Department, working with other U.S. agencies, international partners, and multinational entities, must take charge and let the U.S. military focus on maintaining security. Again, this requires a resolute, long-term U.S. commitment to stability. The U.S. should move very cautiously if reconstruction efforts in a non-permissive environment are a desired course of action.

Reconstruction and development are hard work. Success requires coordination of different elements of U.S. power, and a strong commitment from the local population. Much of this is beyond U.S. control. The departments of State and Defense may do everything right, and yet their development efforts could still fail. War remains a political phenomenon, and a realistic understanding of the elements of successful political outcomes means that sometimes sustained reconstruction and development investments are necessary. Reconstruction in Iraq has cost at least $60.5B; the U.S.-led coalition in Afghanistan has spent over $100B.

U.S. leaders must determine the desired outcomes of any military intervention and clearly articulate what success looks like prior to executing reconstruction efforts; otherwise, stability operations risk failure. To do this, the Department of State must have the appropriate level of funding to lead successful policy objectives.

Peter Feng is a U.S. Air Force lieutenant colonel and member of the academic year 2017 resident program at the U.S. Army War College. The views in this article are the author’s and do not necessarily reflect those of the U.S. Army or U.S. Government.