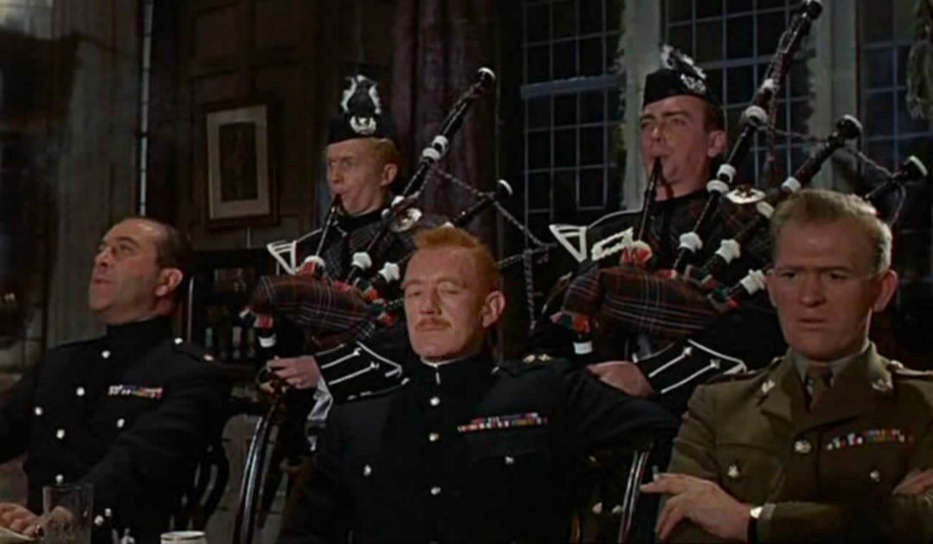 The film’s battalion is beset by a multitude of timeless and familiar challenges: unexpected key leader transitions; the impact of post-traumatic stress disorder on individuals and organizations; [and] difficult post-war reintegration within a unit, family, and community

The father of Robert, Earl of Lytton reportedly counseled his son, “Do you want to get at new ideas? Read old books.” If the old aristocrat were alive today, I suspect that he might add “old movies” to this sage advice. I recently had the opportunity to watch one, and it left me considering the enduring challenges of leadership from a new perspective. I speak of the classic British film, Tunes of Glory. Directed by Ronald Neame and adapted by James Kenneway from his novel of the same title, Tunes of Glory stars two wonderful actors in top form, Alec Guinness and John Mills, as British army officers battling each other for control of an infantry battalion.

The film’s simple, powerful story focuses on a short period right after World War II. Acting-Lieutenant Colonel Jock Sinclair, played by Alec Guinness, has just brought his Scottish Highlands Infantry Battalion back to its regimental home, after extended combat in North Africa, Italy, and Western Europe, followed by some occupation duty in Germany. One evening in the officer’s mess, Lt Col Sinclair — a former corporal-piper who was commissioned from the ranks, and who’s been in command since the Battle of El Alamein — suddenly announces that a new commanding officer, Lt Col Basil Barlow, played by John Mills, will soon arrive. Barlow served in the battalion as a young officer, but then spent the rest of his career on detached duty. Later, he was captured by the Japanese as a prisoner of war.

The two officers are as different as they can be in background, style, and temperament, but both believe they are qualified to command the battalion; Jock, by combat valor and command experience, and Basil, by custom and birthright. Jock reluctantly gives up his command to Barlow and removes his acting rank, but proceeds to subvert the new commander at every opportunity, assisted by his “babies,” the many officers in the battalion who remain overtly loyal to Sinclair.

It is easy for American viewers to get distracted by the different British Army uniforms, the unique regimental cultures and traditions, and the Highlands dialect spoken in the film. However, the similarities between the U.S. and British armies are much greater than the obvious differences. The film’s battalion is beset by a multitude of timeless and familiar challenges: unexpected key leader transitions; the impact of post-traumatic stress disorder on individuals and organizations; difficult post-war reintegration within a unit, family, and community; the relative boredom of peacetime garrison duty; the positive and negative effects of customs and traditions; toxic leadership behaviors; destructive personal behaviors; dysfunctional organizational and family relationships; and confusion over loyalty to individuals, leaders, and institutions.

James Kennaway was clearly a keen observer of officers and soldiers, and his personal experiences doubtless informed this story. Born in 1928, he performed his National Service in the British Army after World War II, as a junior officer in a Highlands infantry battalion, serving both in Scotland and in the British Army of the Rhine, on occupation duty in Germany. While in the Gordon Highlanders in Germany, he personally experienced the challenges faced by the unit as the British Army reduced in size, reabsorbed regular army officers and NCOs from disbanded units, reintegrated a large number of former prisoners of war, and dealt with the tedium of returning to peacetime duty. According to his biographer, Kennaway did not enjoy his time in the Gordon’s, as the battalion was troubled by intense rivalries between the officers, among other problems. When his colonel offered him a regular commission, he declined. He filed these things away, recalling them years later when he drafted Tunes of Glory, his first novel.

“Tunes of Glory” is an intense portrayal of leadership, discipline and reintegration issues common to soldiers and units of any conflict, army, or time period. It could serve as an effective catalyst to discuss any or all of the challenges the film presents, perhaps as part of a unit’s professional development program.

The climactic events of the movie (which I will not describe, lest I ruin the surprise for those who have not seen it) are unnerving in their simplicity and power, and highlight the terrible toll of combat on both the lost and the living. Regardless of which version of the story one pursues (the film or the novel), a study of Tunes of Glory is a worthwhile pursuit. Its serious lessons will help us become better leaders, peers, and followers. This is not a “war movie”, but Tunes of Glory features an intense portrayal of leadership, discipline and reintegration issues common to soldiers and units of any conflict, army, or time period. It could serve as an effective catalyst to discuss any or all of the challenges the film presents, perhaps as part of a unit’s professional development program.

Leadership transitions are a challenge for any unit, especially when they are unanticipated by the organization. They are even more troublesome in the situation where an acting commander steps aside, yet must remain in the unit as a subordinate and assist with integration of the new commander. As an acting commander, Jock should have known that he would eventually be replaced, yet he persists in believing that he will be promoted and placed in permanent command. In Tunes of Glory, this is especially difficult for Jock because of his from-the-ranks past and Barrow’s family tradition of service with the regiment. The book explores this issue in much greater detail than the motion picture; Jock is aware of the great distance between himself and Barrow and often yearns for the simple life of a being just the best piper in the regiment. The role of social class and relations between the ranks is a potential area for deep exploration and discussion by viewers.

Similarly, the issue of appropriately disciplining a senior officer who has committed a serious crime can inspire intense debate. The decision to handle a situation internally or pass it the higher command is fraught with numerous issues, to include reinforcing or damaging the chain of command, providing an example to preclude other transgressions, and, potentially holding the commander and organization up for ridicule. Tunes of Glory effectively portrays the pressure that Barlow faces when he must deal with Jock’s drunken assault of an enlisted soldier, and the toll that decision causes when he realizes that he has made the wrong decision. The role of his senior noncommissioned officers in this situation is also well-illustrated; the wisdom of their recommendation is clearly up for further debate by viewers

Finally, both commanders are facing personal challenges reintegrating with their communities and families. Jock, a widower, does not know how to deal with a daughter who has grown into an independent young woman in his absence, nor does he know how to resolve his relationship with his old girlfriend, frustrated by Jock’s lack of attention. Barlow is divorced, although the reasons are not explored, but possible explanations can be easily assumed through Mills portrayal of Barlow’s nervous tics and short temper in various situations. Barlow sees value in returning to pre-war traditions for community relations, while Jock could care less . . . and either could be right or wrong in this situation.

This story of soldiers in a troubled unit is timeless, and the performances by Guinness and Mills are among the best of their long acting careers. The relationships, personalities, and tensions within the unit will be familiar to veterans of any army. The film’s lessons are as trenchant today as they were when it was released.

“Tunes of Glory,” first released in 1960, stars Sir Alec Guinness, Sir John Mills, and Susannah York, directed by Ronald Neame, and is based on a novel and screenplay by James Kennaway. The only published biography of James Kennaway is James and Jim, by Trevor Royal (Edinburgh: Mainstream, 1983). His edited journals are titled The Kennaway Papers (NY: Holt, Rinehart and Winston, 1981).

Jim Shufelt is Professor of Senior Leader Development at the U.S. Army War College. The views expressed in this article are those of the author and do not necessarily reflect those of the U.S. Army, Department of Defense, or U.S. Government.