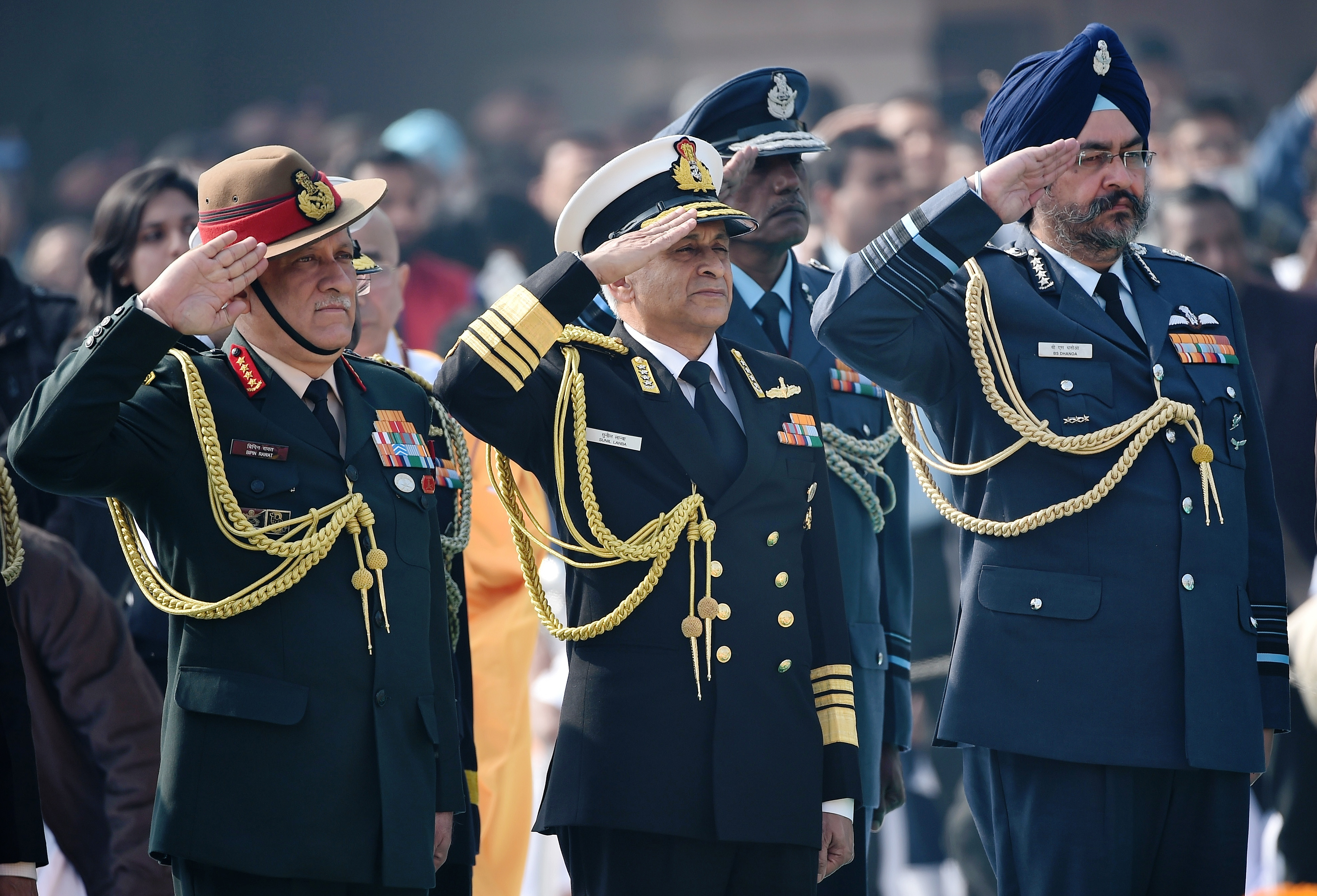 Indian civil-military relations enjoy the paradox of being applauded for robust civilian control in a region where that is not common, while being condemned for an absence of a constructive dialogue on strategic issues between civilian and military leaders

In April 2017, the Headquarters of the Indian Integrated Staff – the equivalent to the U.S. Joint Chiefs of Staff – published its first unclassified joint doctrine. Since its release, the joint doctrine has been subject to significant criticism by defense journalists and analysts. These criticisms include: poor editing and formatting; use of a confusing barrage of jargon (or “buzzword bingo” as we say in the professional military education world); the lack of clear or ambitious thinking about jointness; and its being an example of a lack of civil-military dialogue. These criticisms all have merit. The document is far from perfect, but it nevertheless provides a window into the beginnings of a formal articulation of India’s guiding strategic thought, including the role doctrine plays in its national security and strategy, and what may be indicators of changes in India’s security thinking.

In contrast to the United States, India has not (until very recently), formally articulated its strategic and security guidance. It does not publish a national security strategy, and it has never published the equivalent of one (normally a white paper on defense in a parliamentary system). Only in the past 20 years have its services published service doctrines. A joint doctrine was produced in 2006 but was not made public.

India’s silence on strategy fuels debate about its thinking. Many make the case that it lacks a grand strategy, strategic thinking, or even a strategic culture. The fact that India does not formally have a national security strategy seems to indicate that the critics might be onto something. The lack of strategic thinking is blamed upon ambivalence within the civilian leadership about military affairs and the nature of civil-military relations. The Indian independence movement won freedom from Britain without a military struggle. The legacy of Nehru – Gandhi’s political successor and India’s first prime minister – for Indian political leaders was reticence about the utility of hard military power. Moreover, the Indian military was a British colonial creation, looked upon with some suspicion by Indian political leaders. This uncertainty about how to ‘guard the guardians’ led to a particular form of civilian control over the military.

Indian civil-military relations enjoy the paradox of being applauded for robust civilian control in a region where that is not common, while being condemned for an absence of a constructive dialogue on strategic issues between civilian and military leaders. For several reasons, the military services have been removed from much of the dialogue on strategy and foreign policy, and civilians have been reluctant to enter into military matters, resulting in parallel worlds. Moreover, most civilian policymakers have little interest in defense matters, leaving administration to a generalist bureaucracy, guided more by maintenance of the status quo than by reform and articulation of strategic interests. The services themselves are resistant to change for fear of losing authority or resources if joint commands are formed (Indian service chiefs are both operational and staff commanders). As one can imagine, given the lack of jointness, integration of various civilian organizations with the military services also remains undeveloped.

The United States’ National Security Strategy has set forth American values and interests, and identified threats to those interests periodically since 1987. In contrast, India’s Joint Armed Forces Doctrine 2017 is the first Indian policy document to lay out its national security objectives, national security policy, and even a national security strategy. When referring to India’s National Security Strategy, it offers this caveat: “[e]ven though we have no formally articulated National Security Policy and Strategy, it does not imply that they do not exist or are not sufficiently understood.” Later, in a section on the purpose of war it states, “[t]he purpose of war/conflict and use of force is always ‘political’ in nature. The political objectives of war are set in accordance with the National Security Policy.” Following the example of the Basic Doctrine of the Indian Air Force 2012, the Joint Armed Forces Doctrine 2017 draws upon the Indian Constitution to lay out Indian national security aims.

In specifying these threats, the document highlights how the Indian military conceptualizes doctrine and warfare. In large part, the structure and terms used in the document will seem very familiar to U.S. audiences who’ve read through documents such as Joint Publication 1. One suspects that some of India’s doctrine authors spent time in U.S. military professional schools. For example, they use a traditional Clausewitzian framework to describe the nature and character of war, and define war as a continuation of politics.

There are, however, some differences from the U.S. approach to doctrine development. For example, U.S. joint doctrine normally explains its relationship to service doctrine: joint doctrine supersedes service doctrine. Indian joint doctrine merely aligns with service doctrine. This point illustrates the limits of any doctrine. It is not a visionary blueprint to change how militaries act. It’s meant to be a statement of what the services’ roles and functions are, and how they will go about achieving them while employing extant capabilities. As has been noted in detail, the progress towards jointness in the Indian military is very limited, stemming from both resistance by its services, and friction between the services and the bureaucracy. One cannot write doctrine about how things should be; rather, doctrine needs to reflect the reality in which the services operate. Given that jointness is limited in the Indian military, it should come as no surprise that the concept of jointness in the document is limited, and at times confused.

In recent years, both Pakistani and Indian arsenals seem to be increasing, as both seek to build a triad (of air, ground, and submarine-launched weapons). India’s shift in language in its joint doctrine from ‘credible minimum deterrence’ to ‘credible deterrence’ reflects its growing interest in alternatives in its deterrence posture

Nevertheless, these documents play important roles in publicly disseminating ideas and concepts, so they are valuable communication tools both to internal and external audiences. They show internal consumers such as the public and policymakers what the military can and cannot do. Viewed by external audiences, they can serve as warnings to potential adversaries, or highlight avenues for cooperation with friends and partners.

India’s joint doctrine, then, is an opportunity to signal shifts in how its military is thinking about security issues. There is substantial attention given to internal security, given continued internal unrest caused by the insurgency in Jammu and Kashmir, and in the “Red Corridor,” where the Maoist-Naxalite insurgency locates. There is also concern about Indian youth joining transnational movements such as Islamic State in Iraq and Syria (ISIS).

The sections on deterrence strategy and sub-conventional operations have received the most attention in the media and the pundit-sphere. The Indian strategy community is engaged in a lively debate over the merits and dangers of deterrence and limited war. It stems from the struggle to find viable deterrent capabilities against both Pakistan and China, and a way to respond to terrorist attacks. India has traditionally followed a “credible minimum deterrence” doctrine with a small arsenal, while refusing to see nuclear weapons as “war fighting weapons.” In recent years, both Pakistani and Indian arsenals seem to be increasing, as both seek to build a triad (of air, ground, and submarine-launched weapons). India’s shift in language in its joint doctrine from “credible minimum deterrence” to “credible deterrence” reflects its growing interest in alternatives in its deterrence posture, and in its development of greater capabilities. Pakistan’s development of tactical/battlefield nuclear weapons is also of concern.

Below the nuclear threshold, many debate the merits of various limited war doctrines, ranging from the ambitious and provocative Cold Start Doctrine (or “proactive defense”), to sub-conventional, covert action (often called “hot pursuit” or “surgical strikes”). Previously, India would use its larger military to defeat Pakistan (as it did in 1971). Pakistani nuclear weapons seem to have deterred this option, as seen in 2001-02 and again in 2008. In recent years, covert operations have received more attention. In 2015, there was a well-publicized “covert” Indian raid into Myanmar/Burma. In September 2016, there was another by India across Kashmir’s Line of Control, in retaliation for a militant attack in Uri. There has been speculation that India has been using covert raids for years, but it is a new step for the government and military to publicize them. Building on this new speculation about covert operations, the 2017 doctrine references “sub-conventional” operations and the need to counter hybrid warfare used against India with “raids, cordon and search, [and] show force…” operations. Given the perception that the military could not offer viable options after the terrorist attacks in 2001 and 2008, it seems the military wants to communicate (internally and externally) that it can offer options in response to future attacks.

Lastly, the Indian higher defense organization has retained the structure it had shortly after independence. After the intelligence failure of the Kargil War in 1999, there were calls for defense reform. This led to the creation of two experimental commands, one functional (Strategic Forces Command), and one theater (Andaman and Nicobar Command). While the development of further theater commands has stagnated, there have been persistent rumors over the imminent formation of three functional commands: Space, Cyber, and Special Forces. India’s joint doctrine refers to these in the section called “Integrated Strategic Structures: Emerging Triad.” This perhaps lays the groundwork for the future establishment of these commands. The Doctrine makes the case that integration of these functions is necessary:

The overarching role of Information Warfare (including cyberspace), space, and special operations in support of modern day military operations at strategic, operational and tactical levels require [sic] integrated structures to enable calibration and coordination of operations in these domains.

The document is far from perfect, but it should be seen as a necessary first step towards further change in India’s higher defense organization, and towards increased dialogue on critical national defense issues. Given the nature of civil-military relations in India, it is natural to speculate on why all of this is laid out in a joint doctrine. One possibility is to nudge the civilians to work on a public strategy. As the Doctrine opines, “to address National Security imperatives, it is prudent that institution and structure mechanism [sic] exist that facilitate free flowing communication… The functionaries in the MoD [Ministry of Defence] ought to be enablers of this relationship.” Or, this could be a way for the civilian bureaucracy to test the waters by having the services publish the document and gauge the reaction to it. The bureaucracy could then take in the criticisms and produce a revised national security strategy in its own name.