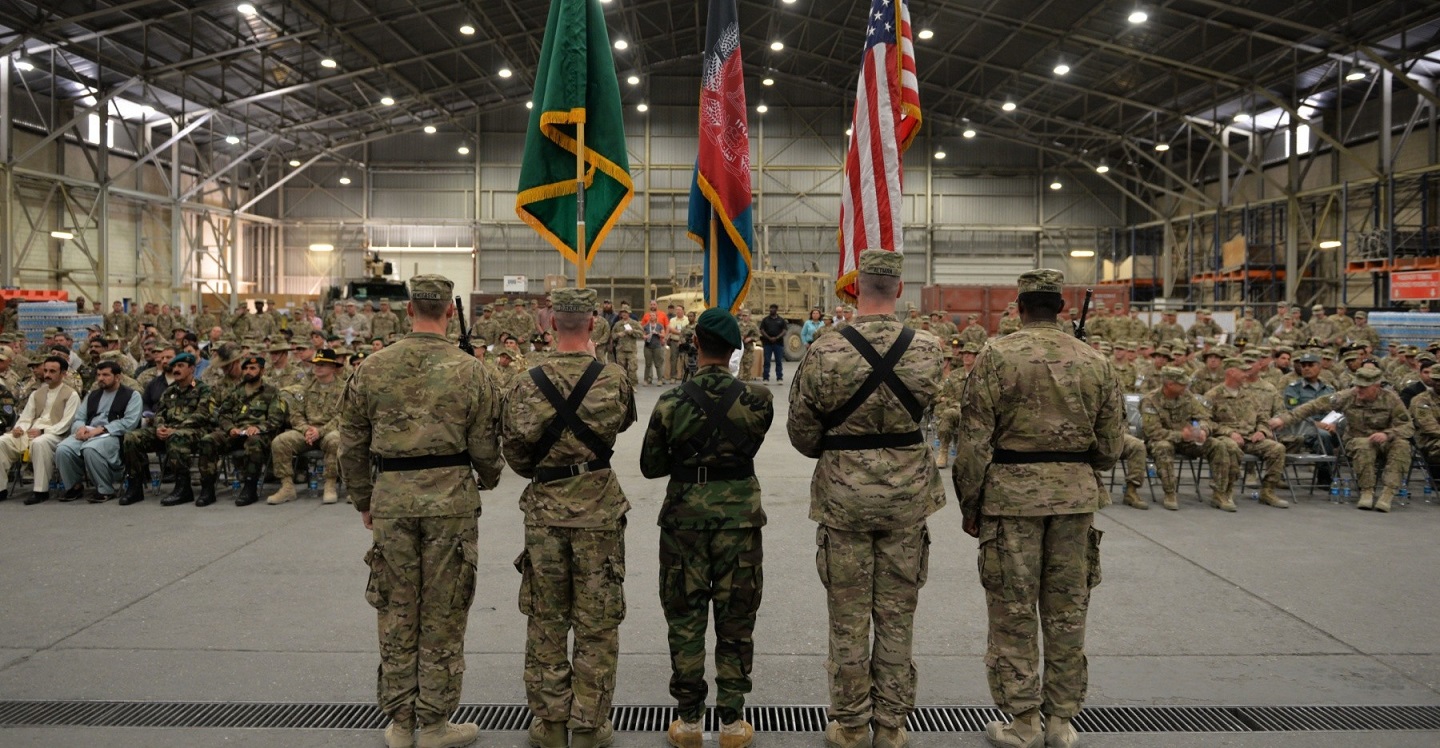 The U.S. Army’s experience over the last 18 years shows a vigorous demand from the Joint Force for deployable Army operational headquarters.

A crisis in the Indo-Pacific triggers a non-combatant evacuation, led by the United States Army Pacific (USARPAC). Its commander orders the skeleton, or ‘cadre,’ headquarters (HQ) of its 24th Infantry Division in Japan to oversee a brigade combat team used for the operation. Meanwhile, the 25th Infantry Division deploys to the crisis site. The Secretary of the Army then orders cadre HQ of both the 7th Infantry and 11th Airborne divisions at Joint Base Lewis-McChord and Alaska, respectively, to be brought up to their full wartime organization and equipment levels, and to be prepared to deploy in the Indo-Pacific area too, if needed. Meanwhile, over in Europe, the 3rd Armored Division’s (cadre) HQ continues overseeing the brigades formerly under the 7th Army Training Command with a ‘modified table of organization and equipment’ (MTOE) configuration — one reserved for warfighting units. Is this imaginable? If so, should the Army invest in more of such deployable but smaller cadre headquarters?

The U.S. Army’s experience over the last 18 years shows a vigorous demand from the Joint Force for deployable Army operational headquarters. Yet, the Army resources general officer-led administrative headquarters that can’t deploy, even though they have permanent mission command responsibilities. In the former U.S. Army Alaska (USARAK), for example, and soon also in the 7th Army Training Command, such headquarters have what’s called ‘training and readiness authority’ over brigade combat teams, to prepare them for war if needed, while serving as their administrative HQ. However, although they’re obligated by such authority, they’re not resourced for it with the personnel and equipment to ensure mission success — let alone being given the prestigious designation of an historic division.

The Army has numerous divisions with illustrious histories that are not on active duty that can be used as designations for these units. Historical connections also exist for each of these proposed cadre division headquarters in the regions they could be assigned. After World War II, the Army assigned the 24th Infantry Division as one of the four Army divisions on occupation duty in Japan. The 11th Airborne Division was the Army’s Pacific airborne division during World War II. As for the 3rd Armored Division, it had a long history in Europe until the Army inactivated it after the Persian Gulf War.

So why do we have these non-deployable units — officially classified as ‘Table of Distribution and Allowances’ (TDA) units — doing the missions of operational division headquarters? It’s because there used to be divisions in their places, and in the case of U.S. Army Japan, there was even a corps headquarters fulfilling those requirements. The former USARAK’s mission stated that it “provide[d] trained and ready forces in support of worldwide unified land operations; support[ed] theater engagement in the Pacific/Arctic; and military operations in the A[laska]-[joint operations area], in order to contribute to a stable and secure operational environment.”

As with current operational division headquarters, today’s USARAK trains subordinate units while conducting theater engagement, and while also contributing to Defense Support of Civil Authorities as needed. The 7th ATC has many similar responsibilities. The key difference between USARAK and the 7th ATC is that, as a ‘TDA’ HQ, USARAK is not technically deployable – at least not in its current configuration.

To understand why the Army inactivated the combat-ready 6th Infantry Division in Alaska and replaced it with USARAK, we need to understand the context of the time. Following the Gulf War, the Army reshaped the force to meet expected requirements. A 1993 ‘bottom-up review’ determined the Army would only fight quick and decisive Gulf War-style conflicts, not counterinsurgency operations or large scale ground wars against peer competitors. The Department of Defense (DoD) tied this strategy directly to massive budget and force cuts. DoD only planned to fight wars it could afford, and any changes to that expectation would require a vastly different force structure.

The Army’s further transition to modularity more than a decade ago removed the requirement for each division to have organic units on a permanent basis: units could be habitually assigned to one headquarters at home station and then be attached to another one, as necessary, to meet mission requirements abroad. Today’s division design therefore remains a challenge: division headquarters rarely deploy with their own subordinate units and are instead customized to meet mission requirements.

A fundamental difference between TDA and TOE units is that TDA units aren’t supposed to deploy; therefore, they aren’t normally authorized operational equipment and can even be heavily staffed with civilians. TDA units are designed to perform specific missions based on workload requirements and are inactivated when they’ve accomplished them.

Since the 1990s, the Army’s leadership of many contingencies requiring operational-level headquarters has stressed its operational force.

Perhaps. But changing these organizations into cadre division headquarters doesn’t mandate personnel increases to the current units’ TDAs. Yet, these HQs would still be the cadres of deployable divisions, and some of their personnel — especially all of their civilians — would still be required, even if they deployed. Every corps and division commander who is also the senior mission commander of an installation faces this challenge: they retain their TOE warfighter responsibilities but also have TDA missions which augment their HQs to do non-warfighting, but still necessary, functions. Each of these organizations is currently structured differently and would require different TAD augmentation to meet its mission requirements. For example, while U.S. Army Japan is a TDA unit, Ist Corps Forward is a small TOE unit. Numerous synergies could be gained by officially combining the two units together, as the 24th Infantry Division — a TOE unit — with a smaller TDA augmentation, rather than the other way around.

These cadre division headquarters could identify the staff needed to run a fully capable division, but not source them until required. Perhaps, these HQ could become ‘multi-component’ units, or MCU’s, which mix active and reserve personnel. MCU configurations would allow these headquarters to have reserve component personnel already identified and sourced, who would only require activation orders when needed. The largest initial cost would be identifying and sourcing the equipment such headquarters would need; even then, most of them already have some capabilities, so sourcing them fully wouldn’t mean starting completely from scratch.

The Army’s used this division HQ structure before. After World War II, in 1947, it activated four HQ as training divisions, with fewer people than combat divisions had. In 1950, when the Korean War redirected U.S. mission requirements toward Asia, Europe still needed defending; therefore, the 4th Infantry and 3rd Armored divisions transitioned from training to combat units, with follow-on deployments to Europe. Such division HQ can still provide senior leaders with additional command and control flexibility today, to adapt to a changing environment. However, if the mission is steady state, then the division HQ continue their daily functions. If additional division HQ are required, then these organizations can be rapidly resourced with personnel to meet new mission requirements.

As we have seen over the last decade, the Army lacks the depth of division HQ to meet all the requirements called for. The National Guard’s sourcing of a division HQ in support of the Middle East operation Spartan Shield further shortened the bench. Cadre division HQ could therefore be optimal augmentations in crises involving large scale ground war. They’d also be ideal as operational HQ for corps or field armies’ consolidation areas. Perhaps they could even provide oversight of a theater army support area, especially in Europe, where the United States does not physically control many of the supporting resources. As a 3rd Armored Division headquarters, for example, the 7th Army Training Command in Europe could provide many mission command functions for day to day operations, and then could be filled to MTOE capacity in response to any crisis in Europe that required additional command capabilities.

A bonus aspect of changing units’ names or operational capacities, such as from non-deployable “TDAs” to warfighting “MTOEs,” is the message it sends our peer competitors. In 2014, the Russian Federation brought back the First Guards Tank Army by reorganizing other commands. With minimal cost, this activation sent a not-so-subtle message to the West’s North Atlantic Treaty Organization (NATO), as well as to its Belarussian and Ukrainian neighbors. What could NATO signal back, if a permanently stationed American armored division HQ returned to Europe? Even at minimal manning, it would still project the idea that the United States takes its European commitments seriously.

There is also a significant internal messaging component here, to our civilian leadership, to sister services, and to the Army itself. Whether in uniform or out, most people do not understand or know what a TDA HQ does on a daily basis. You will not see a single movie on Veterans’ Day that details the heroic efforts of a TDA HQ. Every conversation about one requires an explanation of what it is and what it does. But people do understand operational headquarters, such as those of historic divisions.

Transitioning TDA HQ to TOE units is like taking out mission command insurance, to support the Army and the joint force commander against a hazard. In a perfect world, these units will never do missions beyond their current requirements, but just in case they are needed to fill gaps, wouldn’t it be preferable to have a solution ready to go, with clearly designated sourcing options for their supplemental personnel and equipment? If the Army needed to establish a rotation of division-level HQ, these units would be of enormous value to it, by serving as standing reinforcements, as well as by freeing up the current combat divisions to focus on combat operations.

Establishing a TOE for these cadre organizations would provide the Army with the capability to rapidly field four additional operational-level division HQ, in lieu of their current, less-capable TDA-configured alternatives. Each of these organizations is already meeting multiple mission requirements, to include providing command and control over operational brigades. Shouldn’t they therefore get the tools they need to meet any additional challenges that may arise? No one knows when the next crisis will occur, but the Army can still prepare for one, by filling a deep bench of cadre division HQ — ones capable of rapidly matching their current division HQs’ peers in staffing and equipment. They’re already doing the job by other names; maybe it is time to recognize that and call them what they are.