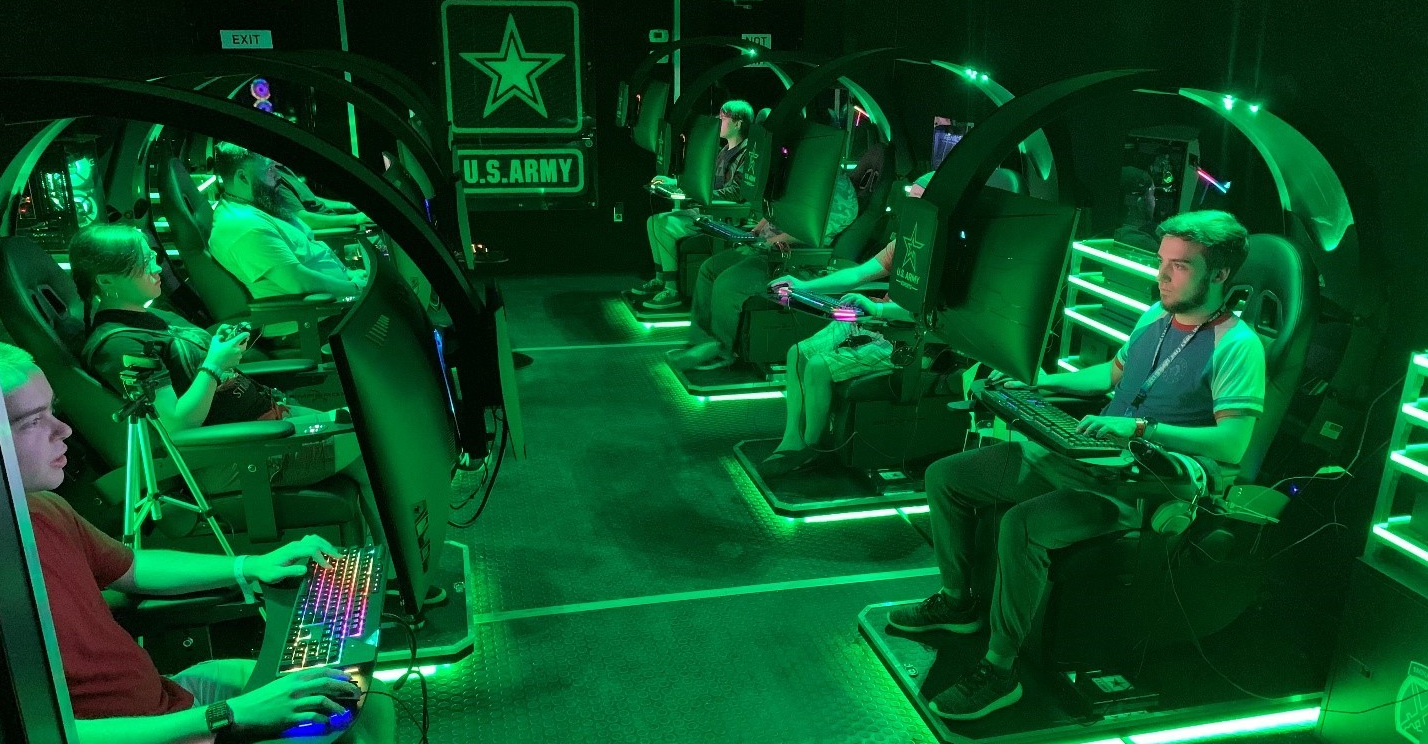 And although the Army was down 5,500 recruiting contracts in April, it appears to have had significant success with its efforts in—wait for it—video games.

COVID-19 has wreaked havoc on U.S. military recruiting. In March 2020, the Army shuttered its recruiting stations across the country, moving all efforts online. Since then, the Army has resumed in-person recruiting, but with added restrictions and in low-risk areas only. The Navy, Air Force, and Marines have also closed many of their recruiting offices. Recent epidemiological models and medical experts suggest that the U.S. will grapple with COVID-19 for the next 12-18 months, until there is a widely-available vaccine. Other experts, however, find that estimate far too optimistic. For the near future, recruiters must severely limit close contact with prospective recruits. All of the services, therefore, have made digital recruiting their main focus. And although the Army was down 5,500 recruiting contracts in April, it appears to have had significant success with its efforts in—wait for it—video games. Indeed, Army leaders claim that games have generated “a ton of leads.” The Navy and Air Force have also embraced digital games as recruiting tools. The Marine Corps, however, has not.

The Corps has been hit hard by the pandemic, due to losing out on its traditional emphasis on “kneecap-to kneecap” recruiting pitches. Recent science and marketing research support the use of games as recruiting tools, and the Marine Corps should embrace them in the short term, looking to the other services’ gaming strategies as useful models. The Marine Corps should take the opportunity of pandemic-disrupted recruiting procedures to rethink and retool its strategic recruiting plan to better adapt to long-term shifts in American society.

The Army is no stranger to using games as recruiting tools. It has long understood the psychology behind games and how they tap into humans’ inherent competitive nature and need for social connection. Using games and gamification is also a smart marketing move, as the research suggests. The Army’s long-running and award-winning game America’s Army has attracted recruits for years.

More recently, in 2018, the Army entered the esports world and founded the U.S. Army Esports (USAE) team. Comprising active and reserve soldiers, the USAE team had already been highly active before COVID-19 hit the United States. In mid-February, Army Secretary McCarthy revealed the Army’s esports efforts were resulting in impressive numbers of leads for Army recruiters. Now with the country in the grips of the pandemic and many young adults stranded at home and jobless, those numbers have surely grown.

How does the Army do it? The same week the Army closed its recruiting offices, the USAE debuted its first Facebook Gaming (FBGG) stream, with team member “Nelpy” playing Fortnite. After 18 hours, Nelpy’s stream had 30 likes, 41 comments, 20 shares, and 1.3 thousand views. These numbers may not seem impressive at first, but since that time the USAE’s Facebook have racked up tens of thousands of more likes, comments, and shares. It has done this by maintaining an impressive daily schedule, live-streaming popular games like Call of Duty and League of Legends on FBGG, YouTube, Mixer, and Twitch. The team has also been highly active on Discord, where potential recruits can chat and game with soldiers. Interested civilians can ask questions about military service and discuss life in the Army in a relaxed, fun atmosphere. The approach seems particularly well-suited for Generation Z (ages 7-22), a demographic that prefers authenticity and “realness” over propaganda and traditional slogans.

In February, the Navy launched its own esports team, Goats and Glory, for recruiting. While COVID-19 has hampered some of the team’s efforts, the Navy has already struck partnerships with several titans in the online gaming world, including ESL, the world’s largest esports company, and Twitch. The Navy has also created its own Discord channel. The Air Force, through the grass roots organization Air Force Gaming (AFG), will be sending an esports team to the highly popular Evolution Championship in Las Vegas. The Air Force also has a web-based recruiting game, well-established relationships with professional esports teams and organizations, and an esports team at the Air Force Academy.

In contrast to the other services, the Marine Corps lacks almost any presence in the gaming world. There are at least three reasons for this. First, Marine Corps Recruiting Command (MCRC) claims that “brand and issues associated with combat are too serious to be “gamified” in a responsible manner.” This conclusion is curious coming from the service that created its own version of the classic first-person shooter Doom in 1996, called Marine Doom, for training purposes. Or that it currently uses games like Close Combat: Marines or Virtual Battlespace 3 in a similar capacity. Or that it’s pouring millions of dollars into a state-of-the-art wargaming center. Games as recruiting tools can serve many functions, and recruiters and officer selections officers must disabuse future marines of any misconceptions about the dangers of military service, much like the Army has done.

A second (and more believable) reason for the marines’ absence in gaming is based in stereotypes about gamers. Many marine leaders, including some of its young officers, see little chance of gamers making good marines. Though much of the available evidence points in the other direction, many marines imagine gamers as pasty, cellar-dwelling slackers, covered in Cheetos and underachievement. As one influential officer at MCRC told me, “the most developed parts of…[young gamers’] bodies are probably their thumbs.” To some degree, the Marine Corps cannot be criticized too harshly for having these views. Until recently, Army senior leaders held them, too. When Army Recruiting Command (USAREC) Major General Frank Muth first briefed his leaders about esports, they responded with “What are you talking about, Frank?'” Similarly, when General Mark Milley, future chairman of the Joint Chiefs of Staff, was told to attend an esports event, he said, “You’re going to make me do what?'” After attending the event, however, he saw the value of the games as recruiting tools.

One marine captain interviewed said he witnessed cyber marines get told they were “bad marines” because they scored in the bottom third on physical fitness tests.

The third reason for the marines’ lack of presence in gaming is likely Marine Corps culture itself. According to a 2018 Marine Corps report, marines put “extreme emphasis” on how many pullups a marine can do and equate this number to a marine’s value, physical readiness, and warfighting abilities. As a result, marines often overlook their peers’ other important abilities or traits. One marine captain interviewed said he witnessed cyber marines get told they were “bad marines” because they scored in the bottom third on physical fitness tests. When their enlistments ended, they went on to lucrative careers in the tech industry. No one is arguing that the marines abandon their physical fitness standards, but simple arithmetic suggests that one-third of marines will always score in the bottom third. The Marine Corps requires people who can operate drones, set up computer networks, manage data, and defend the electro-magnetic spectrum. People, in other words, like gamers.

What would it take for the Corps to change? Given its strong adherence to tradition and the intensity of its culture, it might need a shock to the system. COVID-19 provides a key opportunity for the Corps to take an “operational pause”: to regroup, retrain, and adapt to a radically new America.

So, what should the Marine Corps do? It must embrace gaming and in a way that respects the Marine Corps brand. And a handful of young captains on recruiting duty are doing just that. The most notable example is Captain Michael Maggitti, a marketing and communication officer serving in Texas. In December 2019, Maggitti oversaw the Marine Corps’ largest appearance at an esports event. The response was positive, so much so that the marines participated in a second event hosted by a local independent school district. Maggitti’s marines have also supported incentive programs and live-stream events for students. It seems, then, that esports and the Marine Corps do go together. As the immediate future of recruiting remains uncertain, the Corps should immediately divert additional support and resources to Captain Maggitti and others like him.

More Ways the Corps Could Differentiate Itself

But to be successful in the pandemic and beyond, the Marine Corps must find other ways to differentiate itself from the other services. Rather than focusing strictly on video games, it should also offer digitally the kinds of decision games it already uses to educate marines, like tactical decision games, decision-forcing cases, and tabletop wargames. These exercises could be facilitated on Facebook, Instagram, or similar platforms. Marine Major Will Kerrigan, recently returned from recruiting duty, had great success running virtual decision games for his “Tactics Tuesdays” events. Tabletop games could be played on VASSAL, an open source boardgame engine, or Tabletopia, Steam, Tabletop Simulator, Cyberboard, and ZunTzu.

Expanding such efforts offers four advantages. First, they appeal to those young adults who, while interested in games, are not attracted to esports or traditional video games. They also give potential recruits a chance to artificially experience the kinds of real-world missions and challenges marines face every day. Having potential recruits “fight” decision games facilitated by actual marines could generate immense enthusiasm and curiosity for military service. Third, this approach familiarizes future marines with some of the teaching tools they can expect to see in training and beyond. Finally, recruiters could use traditional decision games to help screen individuals not just for specific career specialties, but also leadership potential, decision-making ability, and critical thinking skills.

As the Marine Corps determines how best to respond to COVID-19’s recruiting crisis, it can draw on additional resources. In the National Capitol Region, recruiters could team up with Sebastian Bae, a former infantry marine now-turned professor at Georgetown University, who teaches wargaming and runs the Georgetown University Wargaming Society (GUWS). Those near Quantico can call on Marine Corps University’s Krulak Center, the Marine Corps War College, and the Marine Corps Warfighting Lab’s Wargaming Division. In New England, recruiters have the Wargaming Department of the Naval War College. And in Southern California, they can contact the Camp Pendleton Conflict Simulations Club, the longest running wargaming club in the area. Now would be a prime opportunity for recruiters to partner up with gaming clubs, stores, and organizations to discuss mutually beneficial partnerships and programs for the pandemic and beyond. Indeed, if the Marine Corps took steps like these, it could emerge from the pandemic far better equipped and ready to recruit.

Conclusion: This is Not a Game

The future of COVID-19 in the U.S. remains unknown. What we do know is that, for now, online recruiting reigns supreme. Digital games in particular provide fertile grounds for recruiting tomorrow’s warriors. Granted, the nation’s economic downturn could lead to recruiters seeing a surge of recruits this summer, but that will not mean the end of COVID-19 and its complications: Experts say that intermittent social distancing may need to last into 2022. How events will unfold in the coming months is anyone’s guess. But as the services look to maintain end strength, one thing is for sure: Things are going to get interesting. We may be on the verge of a virtual battle royale, with each service vying for a piece of the gaming market. Indeed, the deputy general for USAREC told recruiters, ‘”I challenge you to think of the digital space and how we establish superiority…Think of this as the new now.”’ How, in the new now, will the marines respond? Game on, Marine Corps.

Damien O’Connell is a facilitator and designer of decision games, military historian, and frequent consultant with the US Marine Corps. From 2010-2016, he worked as a fellow for the Case Method Project at Marine Corps University. The views expressed in this article are those of the author and do not necessarily reflect those of the U.S. Army War College, the U.S. Army, or the Department of Defense.