This is a hand receipt unlike any other. … Imagine instead of signing for an office key or a computer, … you’ve just taken responsibility for the first atomic weapon.

Military historian Con Crane tells the story behind an unusual hand receipt, showing the transfer of responsibility of the components of the ‘Little Boy’ atomic weapon to Thomas Ferrell, Deputy Director of the Manhattan Project. Mr. Ferrell kept the receipt in his wallet for the rest of his life, and it eventually came into possession of the Army Heritage and Education Center.

Below is a graphic of the hand-receipt. 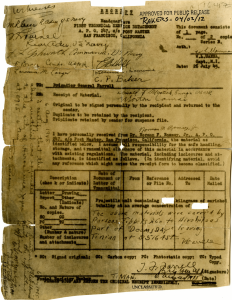 Photo: Photograph of a mock-up of the Little Boy nuclear weapon dropped on Hiroshima, Japan, in August 1945.