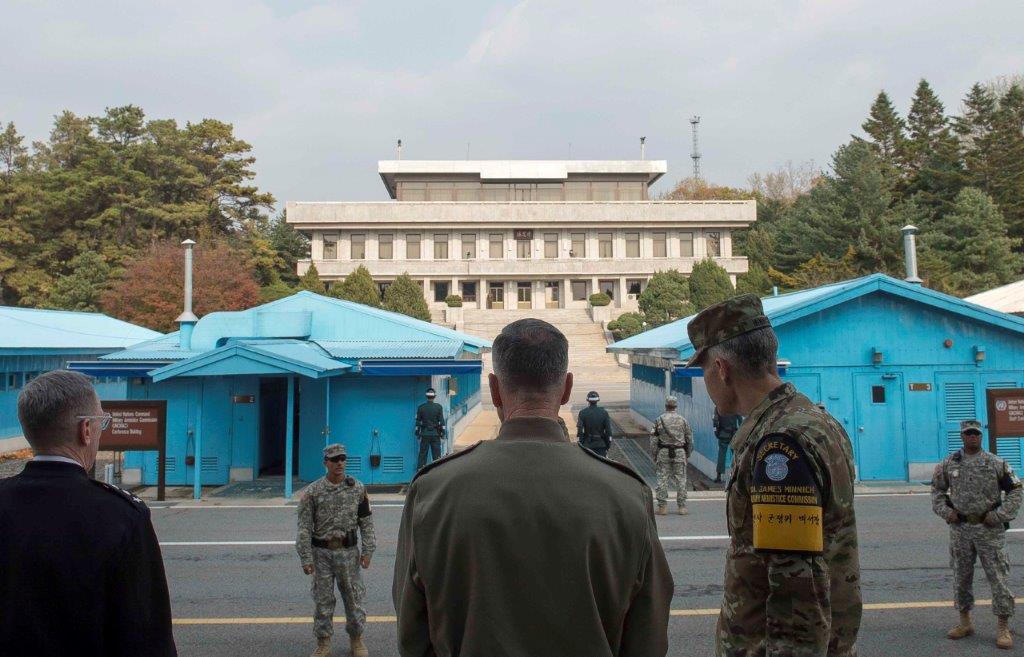 So far, President Trump’s Korea strategy seems to be working: Kim Jong Un has moved from recalcitrance to a willingness to negotiate.

When then-businessman Donald Trump released his 1987 book on negotiation, The Art of the Deal, he could not have foreseen that approximately 30 years later he would be leading a critical negotiation to preserve U.S. national security. The primary parties, North Korea and the United States, have not come to the table willingly, but rather through mutual coercion. Nevertheless, now that negotiations are likely, both threats and opportunities await.

Shortly after taking office, President Donald Trump implemented an entirely new strategy to achieve U.S. interests in relation to the Democratic Republic of Korea (DPRK, or North Korea). The strategy consists of two complementary approaches: working with China as a partner in resolving the crisis, applying pressure to the “core class” that helps Kim sustain his authoritarian position.

After the DPRK launched several long-range ballistic missiles and successfully tested a hydrogen bomb, President Trump asserted that the era of patience (with North Korea’s provocations) had ended, and began a campaign intensifying external and internal pressures against North Korea’s leader, Kim Jong Un, to force the DPRK to the negotiating table. Given that Kim’s missile tests demonstrate a nearing ability to target the U.S. mainland, the United States’ long-term goal of providing regional security in Asia – and to address this coercive threat at its source – has taken on a new sense of urgency.

Any pressure campaign must take a different approach to attacking the regime’s stated goal – survival – by applying external pressure through China. North Korea is China’s client state, a fact recently reinforced by an unexpected series of meetings between Kim Jong Un and China’s President, Xi Jinping, who later confirmed China’s role as a mediator. Before the campaign, the United States lacked convincing leverage over Kim Jong Un, the North Koreans’  and the DPRK’s primary backer, China. Thanks to the latter, North Korea continues to survive despite international condemnation, sanctions, and military pressure. Therefore,  As President Trump stated during his visit there, “China can fix [the problem of North Korean provocations] easily and quickly.” China remains North Korea’s security guarantor, per a mutual security treaty. Recent reports indicate China provides clandestine material support to the DPRK which props up its regime and reduces the effectiveness of international sanctions against it. After the Kim-Xi meetings, President Trump noted, “in the meantime…maximum sanctions and pressure,” would be continued.

A second pressure campaign targets the internal system that ensures the survival of Kim’s regime, which comprises three primary components: a continuance of the songbun(성분) class system; unquestioned reverence of the Mount Baektu bloodline; and control over the organs of government. Tactics used to undermine the internal system have included a twitter spat between Kim Jong Un and President Trump, whose public belittling of Kim called into question the “Dear Leader’s” status as a deity. One key indicator of such tactics’ effectiveness is an increase in military defections from North Korea. These demonstrate that both the military’s readiness level and Kim’s control over his forces are waning, despite his efforts to consolidate his power.

So far, President Trump’s Korea strategy seems to be working: Kim Jong Un has moved from recalcitrance to a willingness to negotiate.

The greatest threat going into these negotiations is war, across the Korean Peninsula and with China, which has stated it would defend North Korea against aggression (rather than lose face by abandoning its only client state). Should war occur, Kim Jong Un knows that he would lose everything. What would be a peripheral war for the United States and China, would be an existential war for North Korea. This fact is the United States’ and its allies’ trump card. Kim Jong Un is threading his way between the threat of war and the threat of North Korea’s collapse.

How do you escape the zero-sum trap of the Korean crisis, in which the key actors in the negotiation think that the other’s gain is necessarily their own loss? The literature on negotiation is vast. In simple terms, the participants in every negotiation have a range of objectives, and the zone of possible agreement (ZOPA) describes the set of potential outcomes that meets interested parties’ objectives. However, these objectives are not fixed, and parties’ commitment to different objectives vary. In a situation like the Korean crisis, it is important to understand what each key participant – China, North Korea, Japan, and the U.S. – sees as its minimal acceptable strategic outcomes (MASOs), that is, the bare minimum that it would accept without going to war.

Of all of the parties’ acceptable outcomes, China’s may be the most amenable to change. In the current crisis, China’s MASOs appear to be to prevent an increase in U.S. influence in Asia, to maintain China’s rise to great power status, and to preserve North Korea as a Chinese client. While all three of these objectives may be beyond negotiation, China may be flexible in the timing and character of their accomplishment. China also wants to avoid a revival of the long-dormant Korean war. It benefits from stable relations with both the U.S. and the DPRK. Trade between the U.S. and China is nearing $650B a year. Neither China’s ruling party nor the U.S. administration wants to disrupt that. On the other hand, unlike the United States’ vast network of allies and partners, China has no other country approaching partner status, if such a label could be put on the China-DPRK relationship. Additionally, China sees itself as a rising great power in every sense of the phrase. China is increasingly challenging the established international order – led by the United States – by way of alternative global institutions, bilateral trade  and loan arrangements, its Belt-Road initiative, and by flexing its military power throughout Asia. Along with China’s increasing power comes a rising sense of nationalism and pride, with a corresponding lack of tolerance for any loss of face.

Prime Minister Shinzo Abe’s drive to amend Japan’s pacifist constitution indicates Japan’s desired end state as having an ability to deter and meet both gray zone and high-intensity conflicts. Japan seeks assurances against further DPRK outrages such as its: ballistic missile threats; the kidnappings of Japanese citizens; and aggressive rhetoric. However, Japan is not likely to act alone. It has a complicated colonial history on the Korean peninsula and it is seen more as a contributing ally in the current crisis, rather than as one having its own strict MASO.

Japan, Germany, Vietnam, and Iraq are all examples of former U.S. adversaries That later became U.S. allies. It may take quite some time, but North Korea could follow their paths.

If war were to occur on the Korean Peninsula, the Republic of Korea would almost certainly suffer immense damage and take perhaps millions of casualties. Obviously, such a result is politically unacceptable to South Korea. The strategic calculus for the ROK is most likely a balance between appeasement of North Korea and solidarity with the United States. The likely ROK’s MASOs are to avoid war, accept a nuclear North Korea, and to continue to alternate between appeasing and deterring the DPRK as the ‘least bad’ of many awful options.

And what of the United States? Allowing the DPRK to have nuclear weapons would open the United States to blackmail, extortion, and threats against it and its allies, forcing extensive concessions to the DPRK. In the past, threats of artillery attacks on Seoul and other provocations have compelled the Republic of Korea to appease the DPRK with food aid, for example. Allowing the United States or its allies to be in such an untenable position is unacceptable; therefore, the U.S.’ MASO is a denuclearized North Korea.

Threats for the Future

Should negotiations lead to a reduction of the U.S.’ regional presence, East Asian powers would have to step up their counter-balancing efforts against China as a rising hegemon. It continues aggressive absorption policies in the South and East China Seas, economic coercion campaigns, and its bilateral exclusionary trade efforts. A future bipolar world, with some countries in China’s column and others in the United States’ column is now imaginable. The Philippines is one recent example of a formerly staunch U.S. ally with which China now seeks closer ties.

Caution is due; any action that the United States and its allies take will result in North Korea and China’s reacting and adapting. In the complex adaptive system of international relations, an action toward an intended objective often produces anything but the intended effect. However, any action which does not bring China closer to the United States’ position will likely further polarize the world, driving China and Russia to strengthen their revisionist ambitions, and to compete with the powers of the liberal world order. The more dramatic any action on the part of the United States and its allies may be, the more dramatic the reaction and the subsequent global shifts against it will be.

While negotiations with the DPRK are fraught with risk, they also offer opportunities. First, a recent, preliminary summit meeting between the North and South Korean leaders at Panmunjom, the site of the 1953 ceasefire for the Korean War, raises hope for a future peace treaty to come. This would be a win for both sides. Perhaps the U.S. and other military forces in the area could transition into “peacekeeping” forces. Such a slight but significant change in status could reduce not only military pressures on the peninsula but also excessive defense expenditures by both Koreas.

Second, negotiations must have terms for putting China in a more accountable position for any negative DPRK actions. The DPRK has a history of agreeing to one thing in negotiations and then doing another – using negotiations and agreements to reduce international pressure, and then advancing its nuclear capability. Holding China accountable for its client state’s actions, especially for violations of human rights, would reveal Beijing’s readiness to become an international leader.

Additionally, offering mechanisms to bring the DPRK into the rules-based international system could provide leverage (in the form of heavy disincentives) against its breaking agreements. In the past, the effects of sanctions alone were often blunted, owing to North Korea’s reclusiveness, its non-reliance on international trade, and its clandestine support from China .

Third, investment from the United States, South Korea, Japan, and the world could serve the dual purposes of dissuading Chinese revisionism, and of encouraging the DPRK’s mutual reliance on other, allied nations. The fact that the United States has no permanent enemies is instructive. Japan, Germany, Vietnam, and Iraq are all examples of former U.S. adversaries that later became U.S. allies. It may take quite some time, but North Korea could follow their paths. A manifestation of this objective could be the reciprocal establishment of diplomatic missions in Pyongyang, Seoul, and Washington, D.C.

While it is unlikely that the DPRK will fully or quickly denuclearize after any negotiations, by expanding the timeline for talks, such a goal may eventually be achieved. Halts to missile development and testing, as well as the employment of inspection teams to verify the latter, are near-term achievable goals which could pave the way toward trust and denuclearization.

The current maximum pressure campaign has brought about the beginnings of a shift in the 65-year-old Korean stalemate. The U.S. has seen such positive signs before, and been disappointed. Will it be different this time? Only the future will tell whether the result will be a hot war or a lasting peace, China’s reluctant partnership in bringing the situation to its current point and Kim Jong Un’s budding realization of his true strategic situation are producing concrete opportunities for a positive outcome, especially if the United States and its allies can seize them.