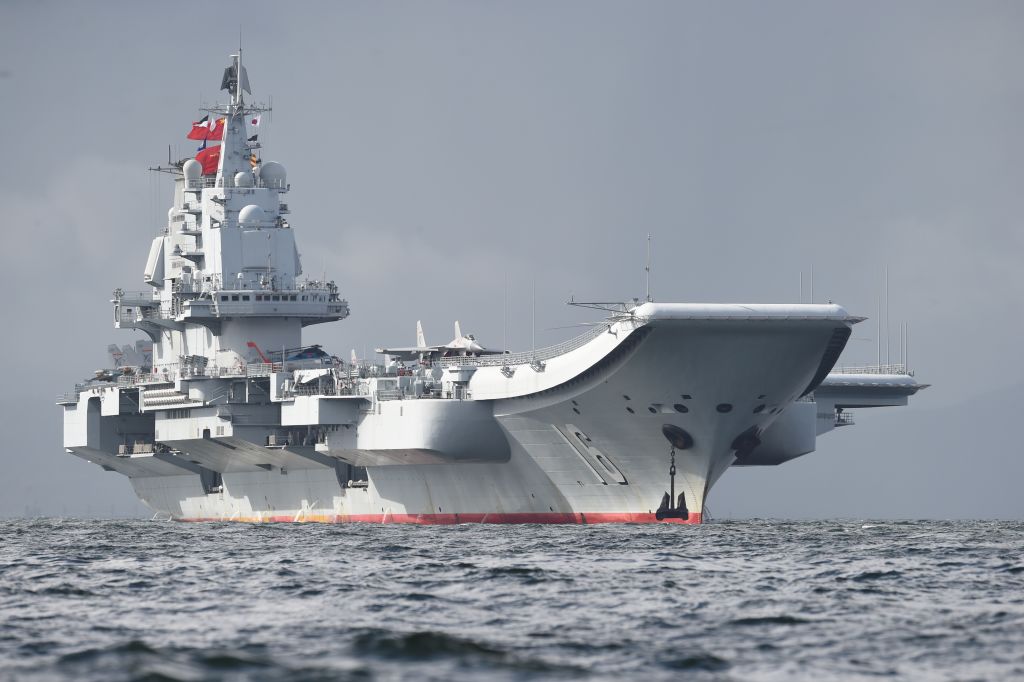 Chinese development of a homegrown aircraft carrier fleet points to the country’s organic ability to sustain itself, and to fund a modern military capacity that relatively few in the world can afford. It is a symbolic asset more than anything else.

China’s recent announcement of its first domestically-built aircraft carrier fleet reflects the country’s newfound power and influence worldwide. Conventional wisdom holds that this developing carrier fleet will be a direct military challenge to the United States Navy. However, the known capabilities of China’s current and planned carriers are no match for America’s 10 supercarriers, especially given the U.S. Navy’s proven combat capabilities. Therefore, China’s development of these carriers suggests that their primary use will not be to rival the U.S. fleet any time soon. Rather, they will serve as global power projection symbols, ones which reinforce China’s political and economic clout abroad, and which also demonstrate an advanced, homegrown technological capability of which China can be proud.

Prior to the advent of aircraft carriers, navies played a huge role in a country’s military might, representing their respective nations to the outside world. Naval battles in the past were typically conducted with galley, sailing ship, or steam era tactics. Engagements featured ships either ramming or shooting at each other en masse, with a battle space potentially hosting hundreds of ships. The naval seascape changed with the introduction of the aircraft carrier. It enabled a navy to strike from afar, playing a role similar to that of an army cavalry’s air assets. Surveillance and engagements could be conducted between navies unseen by one another, solely relying on aircraft to carry out essential tasks, whether they be skirmishes, offensive reconnaissance, defensive screening, or so on.

Prior to the 1960s, Chinese military doctrine was that of a “people’s war,” which primarily emphasized a variant of guerilla warfare. This changed in the 1960s and 70s, especially after the withdrawal of Soviet aid and advisors resulted in a shift of doctrine to the “people’s war under modern conditions.” Though vaguely-defined, this strategy emphasized employing offensive tactics within a strategic defense. Chinese military strategy has further developed with the formation of the People’s Liberation Army Rocket Force as a full service branch, with this specific service component responsible for China’s nuclear and conventional ballistic weaponry. The designation of such a branch is indicative of the conflicts China expects in the future, ones relying primarily on nuclear and conventional ballistic missiles. Additionally, these tools point to a more offensive Chinese military posture, a far cry from the “people’s war” that was advocated a half-century ago.

With this shift in strategy, the Chinese began to emphasize organic Chinese military development. This emphasis increased with the U.S.’s demonstration of conventional military dominance in fighting Soviet legacy systems in Iraq in 1991, and in subsequent military operations. Despite China’s desire for superior, organic military innovation, native Chinese research and development has not been the primary source of Chinese military technology. The vast majority of current Chinese weaponry is based on foreign technologies or is licensed from other nations. Some of the most notable examples of this type of technology transfer include the Shenyang J-11, a licensed clone of the Sukhoi Su-27, as well as the Liaoning, China’s first aircraft carrier, which was built upon the hull of the Soviet Varyag. China’s development has thus far focused on reverse engineering foreign designs, such as those of Russian jets, or to modernize avionics. The introduction of an internally-created aircraft carrier fleet marks a significant change, as China has never been able to develop such a large project using entirely domestic resources. This approach to military innovation suggests that China is capable not only of copying and manufacturing, but also of creating and innovating.

The growth of Chinese influence is evidenced by its increased trade and investments in different regions in the world. Its foreign development efforts complement the goals of many Latin American and African nations in particular, which has extended China’s global reach. Though its sway over these regions was at first economically-motivated, China has since broadened its foreign interests to include funding social projects such as academic institutions, cultural exchanges, healthcare facilities, and more. Thus, China’s economic weight and investments have truly brought Latin America and Africa under Beijing’s sphere of influence.

China has become the most significant economic actor in Latin America in the last two decades, with its trade there multiplying by 22 times the level it was at in 2000. It invested over $30 billion in 2015 alone. Infrastructure investment by China is extremely high, with Chinese state-owned enterprises such as China State Grid and China Communications Construction Company Limited gaining footholds on many utility and infrastructure projects, respectively. Additionally, countries in the region and China are very strong trading partners (which typically strengthens their political bonds). China imports consumer goods and infrastructure know-how from its Latin American partners, which export to it commodities such as oil, soybeans, copper, and iron.

China has also become an important economic player in Africa, investing heavily in critical infrastructure projects there, to include oil pipelines, highways, and railways. It is also developing significant sectors such as finance through organizations such as the Exim Bank of China, offering loans to develop African infrastructure. China is currently Africa’s largest trading partner. The latter imports Chinese consumer goods, while Africa exports commodities such as mineral ores, oil, copper, and timber to China.

China’s investments in both Latin America and Africa have made it an integral player in both continents’ various economies. A deep involvement in global markets offers China many rewards, but it also exposes it to risks. One such peril is that of China’s interests clashing with another regional power’s, with the potential for a costly armed conflict. China must therefore do what all wealthy, powerful, globalized nations do: prepare to defend its interests abroad. One form of defense is power projection, which can be embodied in an aircraft carrier fleet.

The True Value of a Homegrown Chinese Aircraft Carrier Fleet

Chinese development of a homegrown aircraft carrier fleet points to the country’s organic ability to sustain itself, and to fund a modern military capacity that relatively few in the world can afford. It is a symbolic asset more than anything else; a public relations tool to show the Chinese flag in ports around the globe, and to announce that China has ‘arrived’ on the international scene. It demonstrates inherent wealth and power. Clearly, China is ascendant, and the development of an aircraft carrier can be interpreted as one more challenge in part of a broader narrative of inevitable conflict between China and the U.S. But it may also mean something else.

China, unlike the USSR of the Cold War, is part of the world system that the U.S. leads, and China’s continued growth depends on the health of that system. It is not in China’s interest to fight the United States. But let us accept for a moment the hawkish view that China is seeking to challenge the U.S. militarily beyond China’s regional sphere. How does the aircraft carrier change things? Probably not much.

To date, China has cleverly pursued a strategy of asymmetric military development. The aircraft carrier is an anachronism. China, unburdened by a legacy force structure ill-suited to an environment with proliferating unmanned systems that include ballistic and cruise missiles, recognizes this more clearly than the U.S. It is highly unlikely that China would use an aircraft carrier fleet offensively in a meaningful way.

Instead, China’s carrier group would most likely be used in a role that relied on media coverage to spread a political or economic message. For example, China could feature it in diplomatic missions, such as providing humanitarian aid, peacekeeping support, or securing sea lanes of communication. As such, it would not be unlike the evolving doctrinal role of the U.S. Navy carrier fleet, which focuses more on diplomacy than war. A similar new doctrine for using its carrier abroad could boost China’s profile even further in places such as Latin America and Africa, where significant Chinese trade, investment, and political capital have already drawn attention to its presence on both continents. An aircraft carrier fleet, particularly one completely developed, built, and (therefore) reproducible in China, would be a powerful symbol of that country’s capacity and resolve to defend its interests worldwide.

Current Chinese naval doctrine puts more of a focus on escorting commercial ships and combatting piracy at sea, rather than conflicting with peer rivals (with particular emphasis on the United States). These types of ongoing blue water activities by China are not centered around an aircraft carrier fleet; rather, they emphasize a combined force that would focus on limited, short-term offensive capabilities, to include destroyers, frigates, troop carriers, replenishment ships, and helicopters. Changes to China’s military doctrine, combined with China’s political position in current international relations indicate that China’s aircraft carrier fleet is designed to serve more as a symbol of a modernizing military than an aggressor.

Additionally, a homegrown Chinese aircraft carrier fleet demonstrates significant progress in organic innovation, something that the Chinese have struggled with in previous years, particularly with China’s manufacturing might resting on the production of inexpensive, and often copyright-infringing, consumer goods. This approach helped catapult the Chinese economy to new heights, but it is not a sustainable way forward for a country seeking to elevate itself to ‘developed nation’ status. Such a change in status would likely move the Chinese economy from being more manufacturing-oriented toward being more service and consumer-oriented. As a result, China would have to tackle its traditional weaknesses, to include with internal innovation. The Chinese pursuit of competitiveness in the global market is contributing to a more forward-thinking mentality, such as adopting a shift toward Mobile First application design in the private sector.

In the military realm, Chinese development of a domestically sourced aircraft carrier fleet is encouraging the development of homegrown innovations and technologies to support it. Electronics could be developed and produced by groups such as China Electronics Technology Group, while Chinese shipbuilders such as Dalian Shipbuilding Industry Company could design and build these floating cities. With technical know-how flourishing in China, and the development of various think tanks at top-tier academic institutions such as Tsinghua University, China should be able to develop carrier features that go beyond those it inherited, such as the Short Take-Off But Arrested Recovery (STOBAR) launch system on the Type 001A vessel, and create a unique ship that is “Made in China.”

China’s development of an aircraft carrier fleet represents the growth of Chinese global influence. It also signals to the world that China is a nation that not only can copy others’ designs on a massive scale, but also can innovate on its own. The Chinese aircraft carrier fleet has a tremendous ability to support China’s emergence as global political and economic leader. It can serve as a mobile diplomacy force, supporting China’s interests worldwide. The fact that it is Chinese-designed and built will signal to the world that China is an economic and military powerhouse that is here to stay. Instead of focusing on its military capabilities, America must look at such a fleet in its international relations context. It must grasp facts that such a fleet will largely serve as a symbol of China’s determination to succeed in the international marketplace of ideas, as much as goods. As such, it is far more likely to exist as a point of pride for its nation rather than a pinprick to the U.S. Navy’s side.