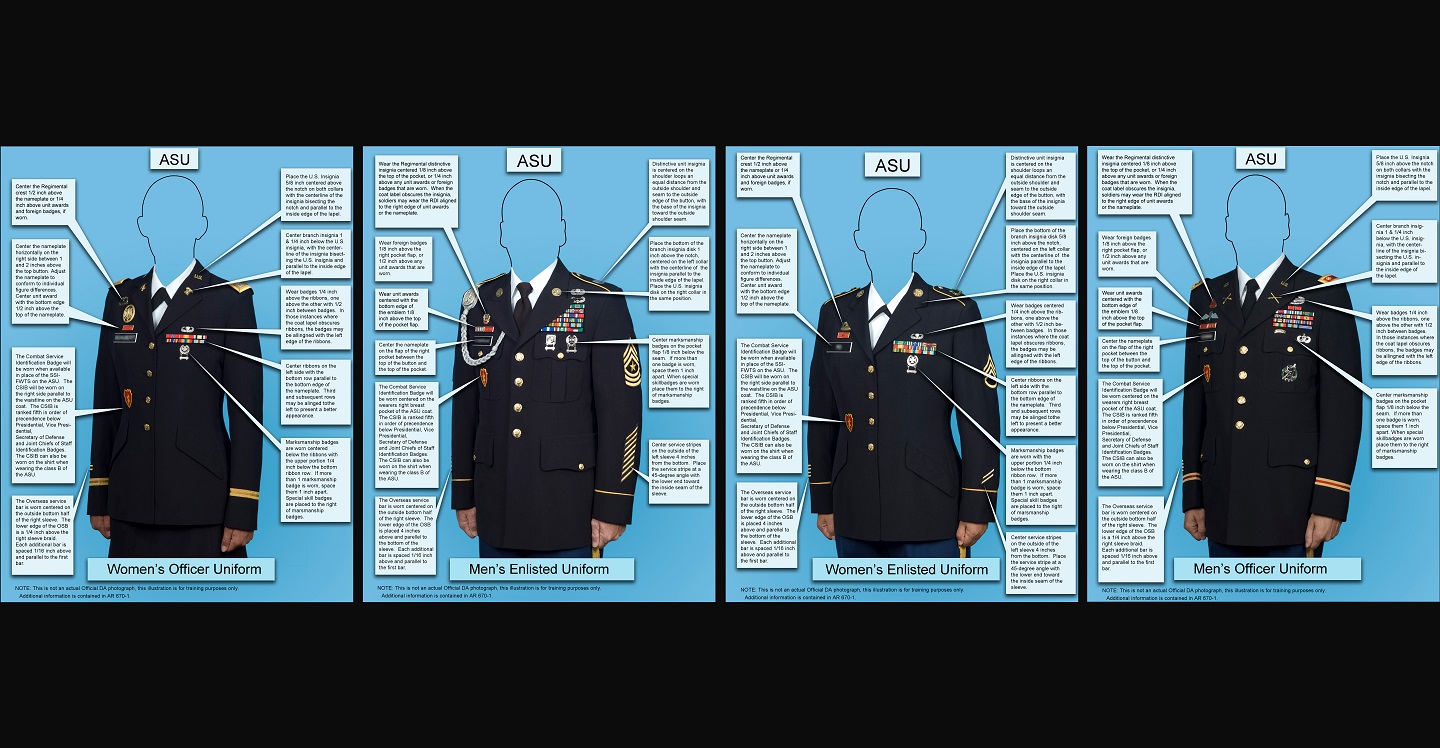 The Army wanted to make sure you were fit, knew how to wear your uniform, and you were not ‘stealing valor.’

As promotion and selection board season rolls through every Army post, officers rush to finish evaluations for their deserving subordinate officers and noncommissioned officers (NCOs). But there is another rush happening too: At the Visual Information studios, NCOs and officers book appointments and wait in line to snap their official Department of the Army (DA) photographs. This ritual repeats itself on every post, for every centralized selection board, for every rank, from staff sergeant to general. The Army regulation governing DA photos (AR 640-30) states that “photographs are of particular interest during DA selection boards and career management activities.” But why?

Common excuses are taken as gospel: The Army wanted to make sure you were fit, knew how to wear your uniform, and you were not “stealing valor.” But even if you accept these premises as valid, the DA photo is not a rational or appropriate way to measure any of these attributes. All it does instead is undermine the Army’s meritocracy. As the Army looks to revamp many of its promotion and selection processes, it ought to drop the DA photo.

The DA photo is a poor tool to measure fitness. Fitness, particularly the functional fitness required of soldiers, does not map directly to body shape, size, or any other attribute that a camera can capture. Besides, the Army already measures fitness. The rollout of the Army Combat Fitness Test (ACFT) has produced a single standard for Army fitness. While open to criticism, the test is the accepted metric for fitness and is appropriately noted on evaluation reports for all grades. There is only one reason that a promotion or selection board should need additional confirmation that a soldier passed the ACFT, once results are noted and signed off on for an evaluation: The board thinks some raters lie. If that is the case, the promotion system cannot be trusted for an honest assessment of every rated person and therefore ought to be trashed. Otherwise, if the rater is to be believed, and the rated soldier passed the Army’s fitness test, then a DA photo may inject a secondary, but potentially misleading data point — one which could prompt snap judgments about a person’s fitness.

The ‘wear and appearance of the uniform’ excuse for retaining the DA photo is further bunk. Except in the rarest of circumstances, a Soldier’s appearance in an Army Service Uniform is a poor measure of that servicemember’s value to the Army. These instances are limited to public-facing positions. In ceremonial units like the 3rd Infantry Regiment or other public-facing billets like recruiters, the wear of the uniform is part of the rated person’s job performance and is therefore evaluated and captured in performance counseling. In normal circumstances, if the servicemember’s wear of the uniform is a significant issue, counseling and evaluations are still the best ways to address or capture such a deficiency. The NCO Evaluation Report and company-grade Officer Evaluation Report (for lieutenants and captains) both have blocks for “military presence” in which uniform appearance can be addressed; therefore, a board does not need the “double-check” of a photo to keep a rater or senior rater honest. If it did, each rated person would need to supply photos depicting his or her proper wear of each of the Army’s many uniform permutations.

The last excuse offered for using DA photos, stolen valor, also fails to justify retention of the DA photo. While there have been high-profile instances of service members wearing unearned badges and awards, no DA photo was instrumental in detecting such fraud. Instead, it was an incongruence between an Enlisted/Officer Record Brief and a person’s official file that alerted investigators to the fraud. Often, such fraud was in wearing unearned badges and tabs in duty uniforms, during normal unit activities, rather than in a DA photo.

Not yielding supposed benefits is bad enough, but DA photos’ potential to undermine the military’s meritocracy is even worse. DA photos may allow unacceptable biases to creep into board decisions and to wreak havoc on what should be a fair process. Racial and gender discrimination, for example, are not just possible; they are probable – and DA photos facilitate such biases. Sociological and behavioral psychology research on implicit biases supports this supposition.

In the commercial job market, candidates with more ethnicity-identifying information on their resumes were significantly less likely to be called for interviews. Similarly, resumes with pictures of minorities or women were strongly correlated with negative reactions by potential employers, even when minority applicants held elite credentials such as Ivy League college degrees. These reactions held true when the studies were conducted on minority participants, suggesting that just ensuring a representative board composition may not correct this issue.

This is not to say that the Army is deliberately attempting to subvert the meritocratic process. The Army already masks most demographic data for promotion and selection boards. However, with a high-resolution DA photo of each candidate being displayed on each board member’s screen, the ethnicities and genders of candidates will be evident in many cases.

The current demographic profile of the Army’s senior ranks suggests a problem with fair advancement procedures, but past attempts to solve this problem have not worked.

Studies using courtroom sentencing data and facial feature recognition show that just the appearance of minority features elicits a strong negative bias against defendants who exhibit them. Persons antithetical to the military’s meritocracy could use DA photos explicitly to discriminate between candidates. Others may fall victim to implicit biases.

The current demographic profile of the Army’s senior ranks suggests a problem with fair advancement procedures, but past attempts to solve this problem have not worked. A 2014 study of the Air Force’s promotion system reported that there were differential rates of promotion attributable to race/ethnicity in 7% of observed cases. Moreover, the study argued that promotion to the most senior ranks required success at multiple, successive selection and promotion boards, which multiplied this effect. With the race, ethnicity, and marital status portions of the Enlisted/Officer Record Briefs withheld from boards, how do board members then discriminate against nearly 1 in 10 officers? A logical conclusion is that it’s because they get to view each candidate’s official photograph.

The United States Army enjoys a significant qualitative advantage over the rest of the world’s armed forces. With a defense budget that dwarfs the gross domestic products of entire continents, does it really matter if our meritocratic promotion and selection system is sub-optimal? Studies from business and from military history suggest it does.

Corporate America has wrestled with issues of diversity and inclusion, particularly in the last half century. Given biases and discrimination faced by numerous minority groups, a look at naturally occurring experiments show the value of inclusion at senior levels. One widely cited study in the American Sociological Review demonstrated that, “racial diversity is associated with increased sales revenue, more customers, greater market share, and greater relative profits.” It further established that, “gender diversity is [likewise] associated with increased sales revenue, more customers, and greater relative profits.”

Military history helps explain why. Surprise is a principle of war. Achieving surprise against an adversary who is actively collecting intelligence against you is difficult. In the modern era, few nations can claim to be as proficient in intelligence collection as Israel. Despite this, Israeli intelligence estimates prior to the 1973 Yom Kippur War regarding the prospect of Egyptian operations to successfully cross the Suez Canal were wildly wrong. Israeli hubris and a presupposition of Arab ineptitude colored many of these intelligence estimates. They also suffered from mirror-imaging, partially because Israeli officers could not imagine that Arabs could come up with better methods than theirs. Israel estimated that after crossing the Canal, it would take 24 to 48 hours to reduce the sand wall of the Bar-Lev Line using bulldozers and explosives. Egyptians accomplished the feat in two hours, because they thought differently about the problem than Israeli engineers did. Imagination and novel thinking gave Egypt a significant (though temporary) advantage.

The point of the foregoing history is that, while not a panacea, diversity enables strategic imagination and makes our Army better. By having many different perspectives and approaches to a problem, the Army is best able to guard against the groupthink and self-confirming biases that allowed the Israeli Army to be surprised. It also opens avenues to frame issues differently and to develop unique ideas. Though ensuring racial and gender diversity does not necessarily ensure diversity of thought or experience, reducing needless obstacles to diversity like the DA photo, removes structural barriers to positive change. In the business world, this has been shown to increase productivity and profits. In the Army, it could guard against surprise and help achieve tactical or strategic advantage.

Promoting and selecting our best and brightest for senior and critical positions requires careful consideration of a myriad of leadership factors. Because the DA photo does not portray any meaningful information about a soldier, and because it does undermine diversity by facilitating implicit and explicit biases, it is time to remove the DA photo from the Army’s promotion and selection process.

Major Paul M Kearney is a U.S. Army Strategist and graduate student at Georgetown University’s Walsh School of Foreign Service. The views expressed in this article are those of the author and do not necessarily reflect those of the U.S. Army War College, the U.S. Army, or the Department of Defense.