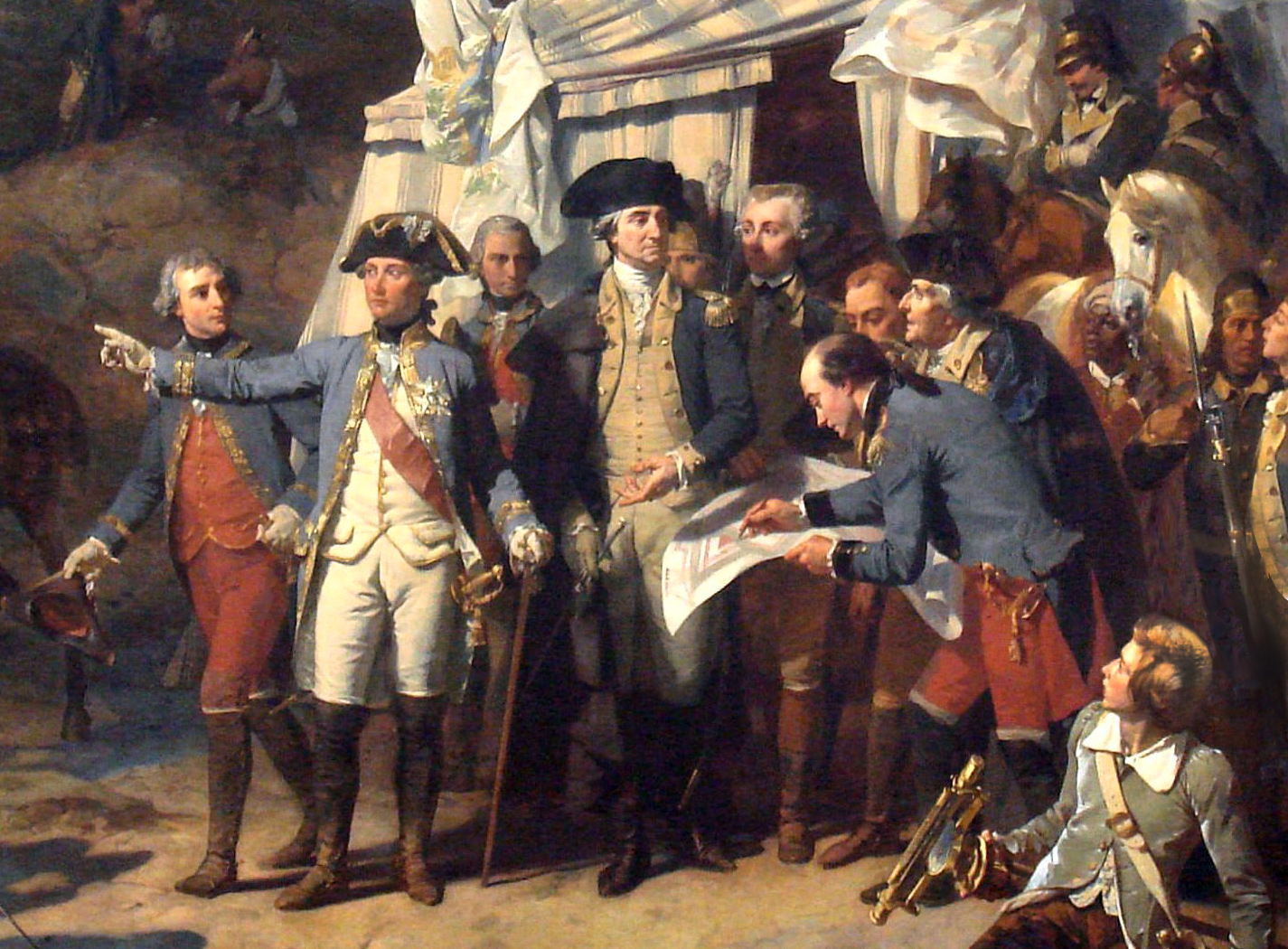 America’s strategic position today bears a stronger resemblance to that of Great Britain in 1781 than to any other actor in the Yorktown campaign.

Today’s U.S. military professionals grew up in an era when their nation’s forces enjoyed nearly unfettered freedom of action in every domain: on land, in space, and especially in the air and on the sea. However, American dominance can no longer be assumed. What is the United States to do? New operating concepts like Multi-Domain Battle (MDB) and Air-Sea Battle (ASB) support a future of synchronized “cross-domain fires and maneuver in all the domains to achieve physical, temporal and positional advantages.” Unfortunately, MDB and ASB disagree on one key question: Should the United States re-assert dominance in every domain, at every place, for extensive periods of time, or should America precisely tailor dominance to domain, time, and place?

The American and French allies who fought in the American Revolution’s climactic Yorktown campaign had to answer a similar question. They concluded that dominance need only occur in the precise domain, time, and place required to achieve lasting strategic effects. The result was stunning, total victory. It could be again.

Russia, China, Iran, and North Korea are “developing capabilities and challenges [to U.S. dominance], and they contest us in all domains now; cyberspace, space, air, land, sea, [and] under seas.” Taken together, America’s four competitor states are developing a host of “guided rockets, artillery, mortars and missiles” as well the electronic means “to completely disrupt our heavily [interconnected] force.” Tomorrow’s battlefield will be far more lethal than recent generations of U.S. servicemembers have faced. The U.S.’s adversaries have advanced to such an extent, in fact, that “U.S. forces can no longer assume superiority in any domain.” Such a lethal environment is not completely unknown in the annals of American military history, however.

Some commentators today link the modern geo-strategic environment and the Cold War, so any look back should begin with the American-Soviet face-off of 1947 to 1991. The hopeful optimism after World War II melted away as first the United States, and then the Soviet Union, tested and stockpiled powerful nuclear weapons, although strategic arms were only one part of the struggle. The newest domains of the post-World War II era were air and space. America broke the sound barrier first, but the Soviets put the first artificial satellite, man, and woman in space. Average Americans would probably say the space race ended with the Apollo program’s numerous moon landings. But the competitions for advantage in strategic arms, precision capabilities, air, and space continued to the very end of the Cold War. Every domain that could be contested was contested.

Even in 1947, this was nothing new. The air domain first emerged as an opportunity for military exploitation during the American Civil War, and came into its own as a war-fighting domain between 1914 and 1945. The American way of war has always been to look far and wide for advantage across multidimensional, lethal battle spaces. This is as true of the Yorktown campaign as any other moment in American military history. In fact, the first generation of U.S. military members and their French allies fought a war in highly contested domains against the single most powerful military in their era. Both sides contested all the war-fighting domains of the time.

Just like the U.S. and France during the American Revolution, today’s military forces have a range of options to address the modern, more-lethal, but historically familiar battlefield. Inaction is not an option. Instead, American forces will remain on the offensive in distant lands and “disperse, stay mobile and fire and maneuver to gain advantage.” The advantage gained will take one of two forms. Multi-Domain Battle speaks of “windows of advantage,” implying transitory effects. Air-Sea Battle, on the other hand, speaks of achieving “maximum operational advantage” and thus implies enduring effects. Which should the United States choose?

The allies’ experience at Yorktown suggests an answer: the United States should seek Multi-Domain Battle’s windows of advantage, not enduring dominance. An excellent, but little-known book about the Yorktown campaign, Harold A. Larrabee’s Decision at the Chesapeake, describes the disparate approaches of the opposing forces on land and at sea. The following summary covers the facts as Larrabee describes them.

Allied commanders recognized that the British Army’s control of the land domain in the American colonies was keeping the Americans from achieving their independence. General Washington, in particular, understood as early as 1779 that the key to wresting control from the British Army on land was separating them from their ironclad supply lines from the sea. The trouble was that from 1763 and throughout the American Revolution the British Royal Navy was the largest in the world. Neither the Colonial Navy nor the French Navy, nor even a combination of the two, could outmatch the British on a global scale. But they did not have to.

Instead, the allies tried to select a time and place to gain local naval superiority over the English forces and to keep it just long enough to effect a significant victory over the British Army ashore in hopes of forcing the British to sue for peace. In the end, that is exactly what the allies did. With the Royal Navy divided between Caribbean and North American coastal operations, the French fleet in North American waters outmatched the British from August 29 to early November, 1781. In the meantime, General Charles Cornwallis surrendered at Yorktown due to a lack of sustainment and waning combat power. Cornwallis’s loss triggered a cascade of political events back in England which would eventually see the end of Lord North’s government and bring in an opposition government willing to negotiate with the Americans. The ultimate result of selective domain control by the allies was the emergence of the United States of America as an independent nation.

Some readers may have noted by now that America’s strategic position today bears a stronger resemblance to that of Great Britain in 1781 than to any other actor in the Yorktown campaign. After all, the people we now call “Americans” were simply rebels and recalcitrant subjects in the eyes of most of the British. The French, meanwhile, were an important – but not leading – world power, enabling local forces to serve a strategic purpose that had little to do with the question of sovereignty over the east coast of North America. The British, however, were the status quo world power of their day and the keystone in a carefully constructed global order based on economic, political, and social ties. What lessons might military leaders in today’s status quo world power (the United States) take from the British side of the Yorktown campaign?

One clear lesson is that global superiority is a nice luxury, but meaningless in operations that depend on local advantage. A second lesson of Yorktown is that ineffective professional relationships at the theater strategic level endanger campaign outcomes. During the Yorktown campaign, military norms of deference to hierarchy and obedience to command broke down between General Cornwallis and the officer who was both his military superior and his social inferior, General Henry Clinton. The two men agreed on little. Their correspondence bristled with simmering animosity. While the allies were racing towards a decisive outcome with single-minded intensity, the British leadership debated how to deploy Cornwallis’s forces around Yorktown, how to sustain them, what forces to dispatch to their relief and in what condition of readiness, and how to regain the initiative. Small improvements in leadership cooperation certainly could have caused British forces to work faster to respond to events at Yorktown. Considering the extremely thin margins of time that the allies enjoyed local superiority at the Chesapeake, the poor relationship between Clinton and Cornwallis may have therefore cost the British the campaign and the war. Best not to risk a campaign over something as petty as social status or personality conflicts.

Granted, by late summer 1781, British military and political leaders had a rapidly shrinking portfolio of options, verging on a search for the “least bad” rather than the “good.” Whether or not the United States has reached such a point today is open to debate. If not, then a longer view of the British war effort – perhaps starting as far back as 1763 – may identify additional lessons of greater immediate relevancy for current American strategy. Nevertheless, military and political leaders today can learn a lot from Yorktown.

During the Yorktown campaign, enduring domain control was not required to secure an allied victory, and near-total domain control was insufficient to secure a British victory. The lessons for today’s military professionals are clear. At Yorktown, selective domain control of the sea for a few months in 1781 set the war on a steady path to American victory. In an era when the United States faces simultaneous competitions with four other nations, efficient methods like selective domain control can deliver just enough freedom of action to achieve lasting strategic effects without having to out-produce all other competitors, everywhere, for all time. Today’s operating environment has a lot in common with 1780-1781 America, and modern military professionals would be wise to carefully consider the lessons of Yorktown.

Theodore Zagraniski is a Major in the United States Army. The views expressed in this article are those of the author and do not necessarily reflect those of the U.S. Army War College, U.S. Army, or Department of Defense.