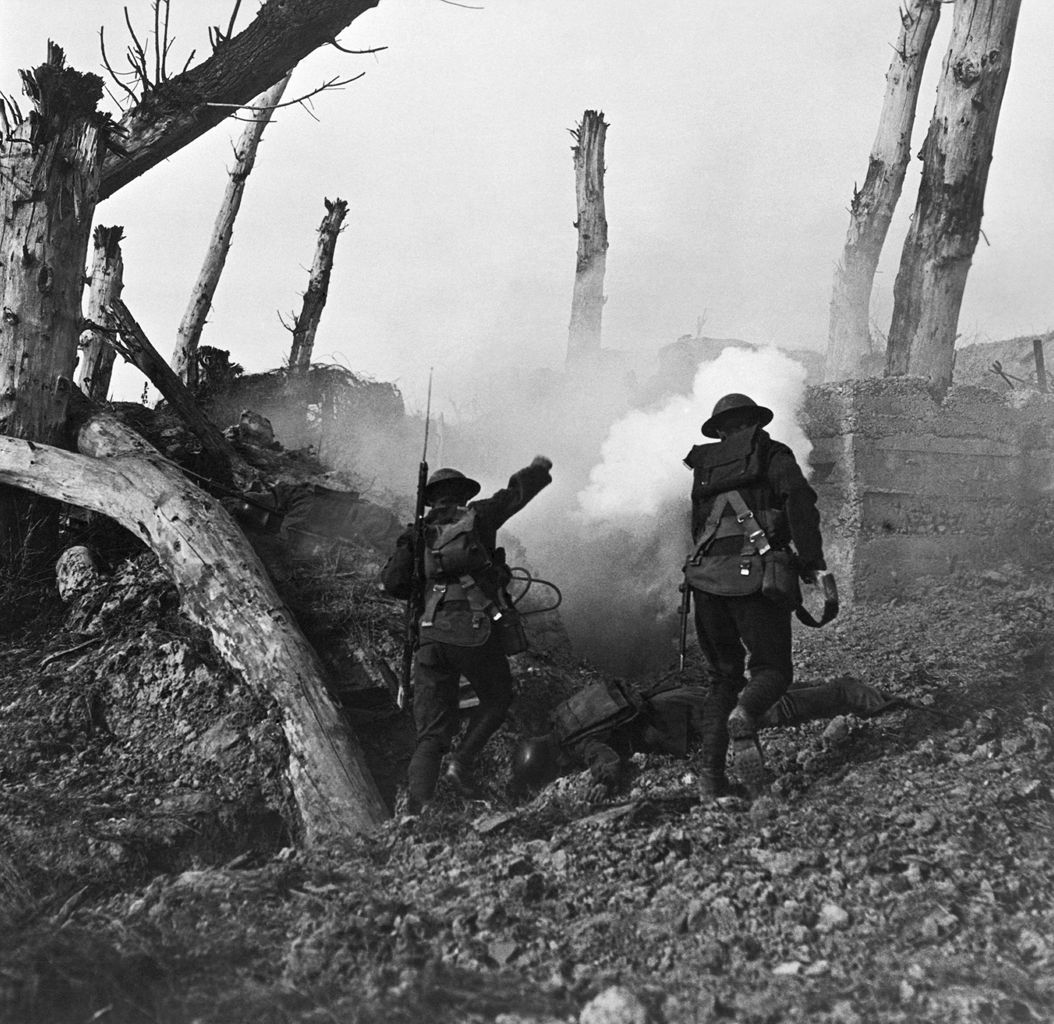 Is it necessary for Generals to be on the modern battlefield? Is it worth the risk?

Stars, I have seen them fall,
but when they drop and die
No star is lost at all
From all the star-sown sky.

Only in command of a brigade for an hour, Edward Sigerfoos was wounded by enemy artillery and died 10 days later, apparently not knowing that he had been promoted to Brigadier General. Slightly more than a month after his death, the armistice would end the fighting and his death would become a footnote in the history of the World War I. In a war in which many general officers were derisively considered to be chateau generals, Sigerfoos was the only American general officer killed as a result of enemy action.

World War I was one of history’s most lethal conflicts: over eight million military deaths, and perhaps ten million more civilians. Sigerfoos was just one casualty among so many millions. Yet such statistics can be overwhelming, obscuring how each one of the dead had a name and a story. As we approach the 100th anniversary of the end of the Great War, it is worth considering the story of Edward Sigerfoos’s service and sacrifice.

More significantly, however, the centennial of Sigerfoos’s death also provides an occasion to consider the place of general officers on the modern battlefield, and the consequences of fighting in an environment in which leaders in battle may be no safer than front-line troops. To a Doughboy from the Western Front, the headquarters of the brigade and division commanders today may bear a strong resemblance to the chateaus on a century ago. Yet war is changing. With pervasive sensors and the proliferation of long-range, precision strike weapons, modern commanders may once again find themselves vulnerable. This raises important questions: Is it necessary for Generals to be on the modern battlefield? Is it worth the risk?

An Ohio native, Sigerfoos attended the Ohio State University where he demonstrated exceptional potential in what is now the Reserve Officer Training Corps (ROTC). Consequently, upon graduation in 1891, he received a rare Regular Army commission and became an Infantry officer. He gained tremendous operational experience over the following decades: operating as a logistician for General Leonard Wood in Cuba during the Spanish-American War, leading counter-guerilla operations in the Philippines, and serving with the Pancho Villa Expedition. When America entered the First World War, he was in China with the 15th Infantry, but was recalled to the U.S. to join the American Expeditionary Force (AEF).

Even though Sigerfoos spent a significant amount of time “in the line,” he was also something of a soldier-scholar. He was an honor graduate of the Infantry and Cavalry School at Fort Leavenworth class of 1895. Ten years later, during his four-year tenure as the commandant of cadets and professor of military science at the University of Minnesota, he would earn two degrees in law. Finally, in 1915, he graduated highest in his class from the U.S. Army War College, and because of his academic prowess, earned an invitation to stay as faculty. His student project paper and two works as an instructor – all three about the Civil War – are in the library in Ridgeway Hall.

Upon his return from China, Sigerfoos joined the 77th Infantry Division at Fort Upton, New York. There he commanded the 152nd Depot Brigade (a reception and training unit) for a few months before shipping to Europe. After arriving in France, the soldier-scholar took command of the AEF’s School of the Line. Considering his significant operational and academic experience, Sigerfoos was an ideal candidate for the position. He reportedly turned around the failing school.

While leading the School, Sigerfoos also spent considerable time on the front lines seeking insights and lessons learned to enhance the school’s training program. Those experiences, combined with his superior leadership skills, drew the recognition of his superiors. The commanding general of the AEF training school system recommended him for promotion to general officer on September 18, 1918, and he was selected to take command of the 56th Brigade of the 28th Infantry Division on September 29th.

During this period, divisions were assigned two maneuver brigades, each of these structured around two infantry regiments. Brigades were commanded by brigadier generals, and, as with other National Guard divisions, all of the general officers in the Pennsylvanian 28th Division were Regular Army Officers. At this point in the war, brigade commands were changing frequently to allow senior colonels and brigadier generals opportunities to gain command experience in combat.

The 28th Division started its attack into the Argonne Forest on September 26th. Sigerfoos’s fellow honor graduate from Fort Leavenworth, General Charles Muir, commanded the Pennsylvania National Guard division, dubbed the “Iron Division” by General John Pershing. Muir had a reputation of leading from the front, and had even taken command of a leaderless rifle company in battle.

The Germans were fighting a delaying action. As the 28th division’s history recounts, enemy artillery was mostly ineffective during the attack on Varennes. But within an hour of joining his brigade, Sigerfoos was forward enough that an artillery round detonating close by inflicted a mortal head injury. He died of his wounds on October 7, 1918. Sigerfoos’s obituary in the New York Times pointed out that only two other Brigadier Generals were wounded during the war: Brigadier General Douglas MacArthur, who served with the 42nd Infantry Division, and Brigadier General Albertus Catlin, who commanded a Marine Corps brigade at Chateau-Thierry.

Generals on the Battlefield

The vulnerability of commanders in war has waxed and waned over time, yet trends since World War II suggest that war has become safer for generals.

In World War II, 18 general officers from the U.S. Army (not including the Air Corps) and Marine Corps died in operational circumstances, although four of those were the result of accidents and one was caused by heart failure (Major General Theodore Roosevelt, Jr.). In a strange coincidence, one of those killed in action, Brigadier General James Edward Wharton, was shot by a German sniper in Normandy on August 12, 1944, having only hours before taken command of the same 28th Infantry Division in which Sigerfoos had commanded a brigade decades earlier.

The physical position of generals in battle has changed to reflect both changing technology and changing attitudes about leadership in war. The eminent historian John Keegan examined the evolution of generalship, including the commander’s place on the battlefield, in his classic The Masks of Command. He used four commanders to describe historical archetypes: Alexander the Great as the Hero, the Duke of Wellington and Ulysses S. Grant as Anti-Heroes, and Adolph Hitler as the False Hero. Keegan offers that throughout history, despite a kinship born of battle, commanders sought to create distance from their subordinates, which in turn created a certain command mystique. Keegan considered generalship in the nuclear age to be that of Post-Heroic command.

For millennia, Heroes led from the front, and there is no better example than of Alexander at the siege of Multan. Too impatient to wait for his siege equipment, he started the attack and overcame the first ring of defenses. He placed the first ladder against the inner wall and reached the top before the ladder broke. Keegan speculated that Alexander, surrounded by swordsmen and archers, could have jumped back down to safety, but instead he jumped into the citadel to inspire his men to penetrate the wall and rescue him.

Generalship evolved along with weapons technology. Keegan uses Waterloo and Shiloh as examples to demonstrate that although neither Wellington nor Grant were immune from risk (in both cases, subordinates fell all around them), they were not at the very front of battle. The so-called Anti-Heroes used the mobility of horses to put themselves into positions just behind the main effort to gain situation awareness, make decision, and issue guidance.

In World War I, it became possible for Generals to maintain command from greater distances, enabled by communications technology. Hitler, the “False Hero” far removed from the action, modelled his command style on the chateau generals of World War I. While this may have enhanced his mystique, the distance from him and the common soldier was almost impenetrable.

Generalship in the Post-Heroic Age

But what if the modern general’s place is not leading on the battlefield at all? In the Post-Heroic age, Keegan argued that modern commanders have four imperatives: prescription (what we define as Mission Command), sanction (maintaining order and discipline), action through knowledge, and example. While Keegan felt that nuclear weapons put soldiers in every echelon at risk, he also stated that “Today the best [generals] must find conviction to play the hero no more.” The imperative of example relies more on performance, both in the sense of outcomes and how the commander manages his or her leadership image.

We continue to accept it as doctrine that leaders should lead by example and position themselves on the battlefield where they can make the most difference. In a recent article, “The End of the Fighting General,” B.A. Friedman suggests that modern generals should embrace the concept of being soldier-scholars who combine their studies in foreign policy and experience in the use of military force to enable combat operations and influence policy, allowing their tactical subordinates to execute.

For generals, this means leaving behind their expertise in tactical operations, centuries of leadership tradition, and even ego. As Roger H. Nye cautions in the Challenges of Command, the commander as warrior is one of several roles that a commander has to assume. Some generals, however, can be so attached to the role, the resulting hubris can lead to their failure.

For generals, finding their place on the battlefield will continue to be a balancing act. Today’s battle command systems provide unprecedented information and situational awareness which allow generals to empower their staffs to manage action in real time, while giving them some distance to consider and plan beyond the current fight. Indeed, these systems can provide such unprecedented battlefield awareness that the great challenge for generals may be to resist the urge to direct small-unit operations from their remote headquarters. Artificial intelligence will raise further questions about the place and role of generals.

But generals taking over a new command will no doubt still want to head straight to the front – just like Sigerfoos – to meet their soldiers in the field and accept (if only briefly) the risks of battle.

The risk that Sigerfoos took has not been forgotten. Just outside State College, Pennsylvania, is the small town of Boalsburg, the site of the 28th Infantry Division Shrine. The sprawling memorial was initially erected by the division’s veterans after World War I to honor their fallen brethren; since then monuments have been added to honor the Iron Division’s fallen in subsequent conflicts. Dividing the central stairs of the shrine, is a memorial erected in 1924 to honor the fallen brigade commander. It is topped with a roadside cross, a gift from the citizens of Montblainville, the town near where Sigerfoos was wounded.

Like a falling star, Sigerfoos tenure in the Iron Division was fleeting, too short to even be mentioned in the division’s history, but his sacrifice and its significance were not forgotten by his last comrades.

George Schwartz is a retired brigadier general in the U.S. Army and currently serves on the faculty of Immaculata University. The views expressed in this article are those of the author and do not necessarily reflect those of the U.S. Army War College, U.S. Army, or Department of Defense.