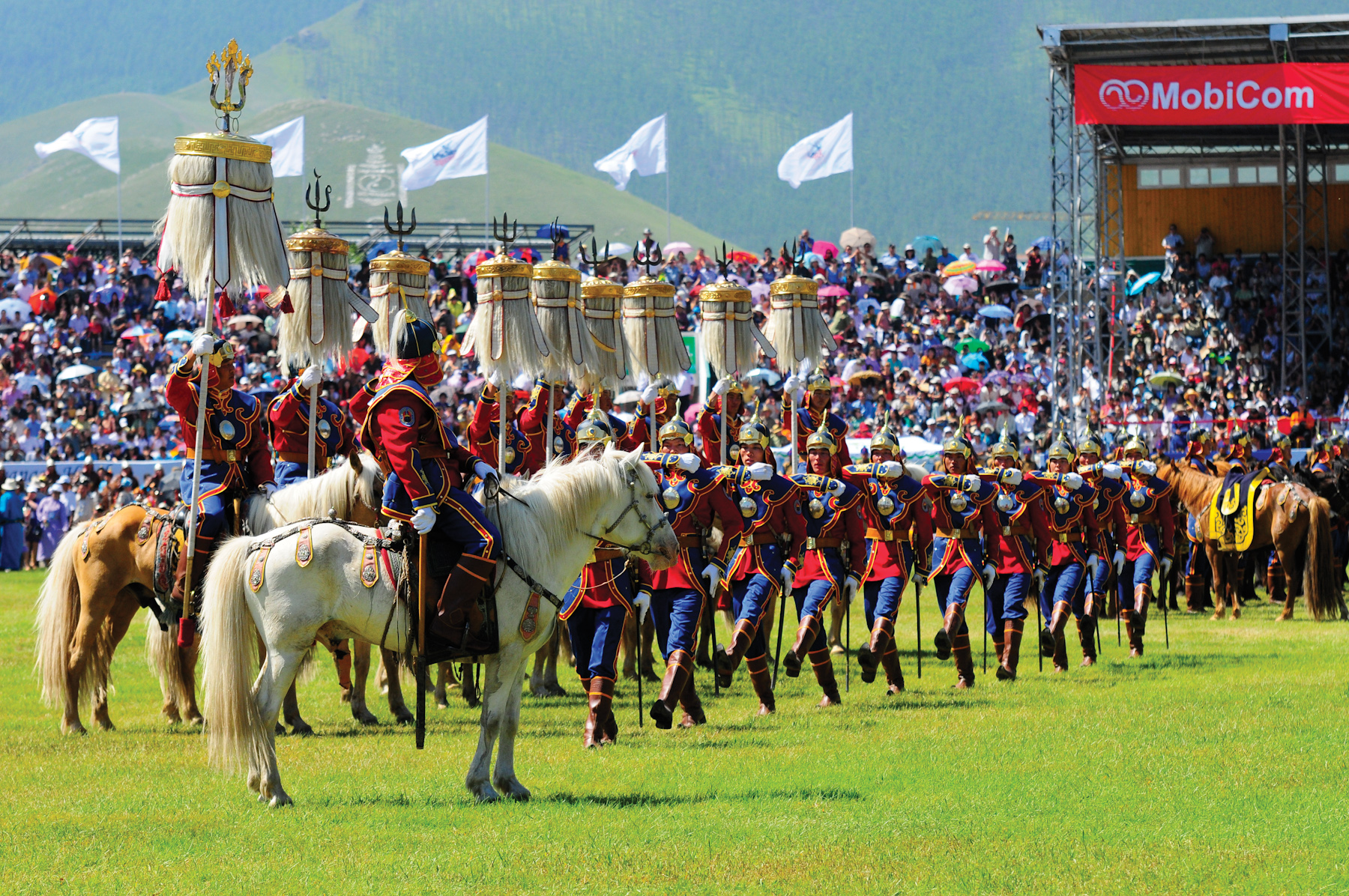 Mongolia always will be sensitive to its location and attentive to the influence of its powerful neighbors [, Russia and China.]

Mongolia, located in Northeast Asia, has felt itself sandwiched between Russia and China since the end of seventeenth century. Historian Thomas Ewing described Mongolia’s geostrategic situation as “between the hammer and the anvil”, while Baabar Bat-Erdene Batbayar, a Mongolian political analyst, likened it to a “baby otter caught between the rocks.” In a 1979 study for the Hoover Institution at Stanford, Robert Arthur Rupen argued that Mongolia’s defense policy was dominated by the Soviet Union, and that it was fully integrated into a Soviet collective security system that assured political and military benefits for Mongolia. Since the breakup of the Soviet system in the early 1990s, landlocked Mongolia has sought a way to get along with its large and powerful neighbors, and to pursue security through defense and diplomacy. Mongolia’s post-Cold War efforts in this realm offer an insight into the delicate strategic balancing that its geographic disposition demands.

Shifting from the Cold War Past

As the Sino-Soviet rift of the early 1960s developed, Mongolia shed its balanced relations with its immediate neighbors and drew closer to Russia, especially in the political, economic, and military realms. From the 1960s to the 1990s, Soviet forces in Mongolia provided it with military assistance for its defense, as part of a strong Soviet defense presence in Northeast Asia. This Soviet patronage increased the Mongolian people’s sense of security and reduced their feeling of vulnerability.

During the late 1980s and early 1990s, however, the Mongolian defense situation changed significantly. The disintegration of the Soviet Union and the end of the Warsaw Pact left Mongolia scrambling to create a new security framework for itself. Since there was no collective security system in place after the fall of the Soviet Union, it was vital for Mongolia to create an independent security policy that gave priority to its national interests — ensuring its independence and sovereignty, and enabling the nation to address its development issues. Mongolia’s contemporary national security strategy is built upon the overarching interests of the nation, including economic security and development, territorial integrity, homeland security, and the security of civil liberties. Protecting and advancing these interests rests principally in the political and diplomatic realms, with a more limited role for the Mongolian military.

Mongolia always will be sensitive to its location and attentive to the influence of its powerful neighbors–particularly with respect to their politics, and their economic and military policies. But Mongolia now looks outward too. It seeks connections with other important players in the international system, including with the United States.  Mongolia is no longer simply a “buffer” state; it has become a “bridge” and influencer in Northeast Asia. Since the early 1990s, the nation has also grown more confident and proactive in its relationships with other nations.

In 1992, two years after Mongolia’s democratic revolution, it introduced a constitution. Under it, Mongolia adheres to universally-recognized norms and principles of international law and pursues peaceful foreign and defense policies. In 2015, the Mongolian Parliament adopted the renewed Defense Policy of Mongolia.  This is the defense community’s policy in support of the desired end states sought by the people and the Government of Mongolia. It includes defense-related laws, military strategies, and regulations governing the employment of instruments of national power to achieve desired end states, and to defend the genuine interests of Mongolia. Consistent with the country’s outward look, it emphasizes Mongolian preference for multilateral cooperation. The policy consistent with the interests of our partners who oppose the spread of weapons of mass destruction, and value military professionalism through civilian oversight.

As in other nations, Mongolia uses its available ways (concepts and policies) and means (resources) to achieve objectives that support Mongolian national interests. These interests include implementing a self-defense principle and developing good relations and cooperation with neighboring countries, to secure the independence and sovereignty of Mongolia. Its three major defense policy goals are: (1) balancing the Government’s policy objectives and enhancing its relationships, not only with its immediate neighbors but also with “third neighbors,” the noncontiguous countries that are relevant to Mongolia’s national security interests; (2) justifying the Mongolian military’s contribution to homeland security, civil defense operations, and peace support operations outside of Mongolian territory; and (3) establishing a future defense policy for the country, and for the strategic direction of the Mongolian Armed Forces (MAF).

One of Mongolia’s most difficult challenges may be structuring a defense system featuring a modern and professional army.

Obviously, positive economic growth would contribute greatly toward the nation’s ability to fund sustained defense progress. According to the World Bank, Mongolia’s economy might achieve strong growth. With a population of 3.1 million and a GDP of 11.2 billion USD in 2016, Mongolia’s national defense needs push persistently against the constraints that flow from limited human and material resources, so an ongoing civil-military dialogue is necessary for setting priorities and opening up opportunities. The Government of Mongolia seeks to continue to participate in peace support operations and in international activities such as NATO’s Partners Across the Globe, which in turn serves to enhance its own defense capability. Thus, the effectiveness of Mongolia’s defense policy is not unrelated to the nation’s success in bolstering its influence in the international arena.

Mongolian national defense policy relies on the “self-defense principle.” This principle, which is anticipatory, is based on a complex, integrated system that rests on territorial defense. Territorial defense, based on general conscription, could be a suitable way for the nation to  defend its independence and to preserve its geographic integrity. Another objective of the national defense policy is to provide for Mongolia’s military security within the framework of international cooperation.

Mongolia must rely on diplomacy, develop friendly relations and cooperation with its neighbors, and build ties with key members of the international community, to ensure its national independence. It is in Mongolia’s interest, as a small country, to work toward strengthening a common security policy within Northeast Asia. Mongolia’s current politico-military status within Northeast Asia is mostly influenced by developments in Russia and China. The development of its regional context emphasizes Mongolia’s need to keep its independent defense force up to date, and to hone its skills by participating in peace support operations. Doing these things provides security for Mongolia’s people and promotes regional and global stability.

Relationships with Russia and China

Only stable, neighborly relations with Russia and China and broader integration into the regional and world community can provide reliable security for Mongolia. In strategic terms, Mongolia–the land between Russia and China–is more secure from external threats and border tensions than it has been since the beginning of the nineteenth century. This situation has important implications for Mongolia’s confidence as a nation, its defense outlook, its defense policy, its MAF modernization priorities, and its relations with its closest neighbors, as well as with those in the greater Asia-Pacific region.

The threats and risks Mongolia faces today are different from those of its past; their variety has increased and is ever-changing. These new threats put pressure on Mongolia’s democracy, which is still in the process of consolidation. Terrorism and the proliferation of nuclear, biological, and chemical weapons are real and viable threats that cannot be ignored. Mongolia, like every other country in the world, faces the challenges of nontraditional threats such as pollution, natural disasters, epidemics, and environmental degradation. The MAF has therefore accepted an important responsibility: protecting and rescuing citizens and their property during extremely snowy winters, which can cause a natural disaster known as “dzud.” When a largescale dzud occurs, Mongolian military personnel conduct disaster relief and recovery operations, which in turn improves civil-military relations, and heightens both government and military readiness for other domestic missions.

One of Mongolia’s most difficult challenges may be structuring a defense system that features a modern, professional army, capable of performing many functions in times of peace and war. Towards this purpose, Mongolia is taking active measures to develop a modern military force, capable of performing a variety of tasks from disaster relief to peacekeeping operations. The MAF must be versatile, adaptable, and ready to spring quickly into action. Mongolia is not able to protect its entire territory with its military forces, so it therefore prepares them for localized combat actions. Accordingly, the MAF has adopted a defensive position, as expressed in the current defense policy and its related laws and regulations.

In the future, Mongolian defense policy should consist of two parts: the first part should emphasize cooperation between Mongolia’s defense and security instruments. The second should stress cooperation with direct neighboring countries, indirect neighbors, and with international organizations. Mongolia has practiced cooperation between its defense and security instruments for long time; and both Mongolia’s Defense and Security Policies emphasize the need for more. This cooperation must remain flexible and focused toward likely scenarios identified in the policies such as refugee flows and civil unrest. International engagement is not new, especially in military training and arms procurement. But the current and future focus needs to be on promoting peace in the region and beyond, through worldwide humanitarian operations whenever possible. Far from just being between the hammer and the anvil, Mongolia has proven itself a contributor to global peace and stability and should continue on that path.

Photo: Scene from the 2011 Naadam ceremony in Ulaanbaatar, the capital of Mongolia. The Naadam is a traditional festival in Mongolia that celebrates the country’s nomadic past. It includes competitions in three traditional sporting events — wrestling, horse racing, and archery. The 2018 Naadam begins 11 July 2018. Click here to learn more about the festival and its history.