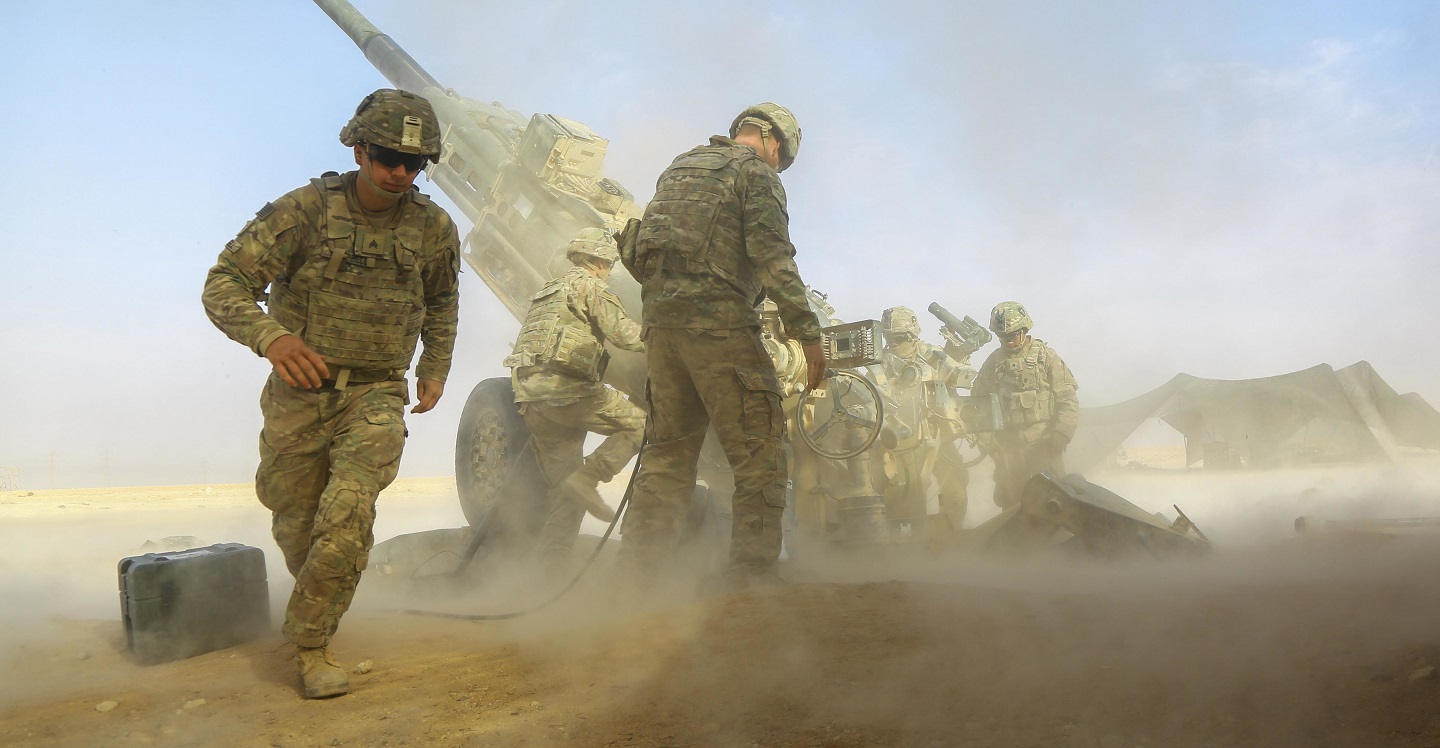 U.S. involvement in Syria and Iraq from 2014 to the present exemplifies the central role of landpower in a nation’s national security and shifting political objectives.

The physical presence of American forces on the ground in Syria served as a negotiating chip between the United States and the government of Turkey – not American airpower, not U.S. fleet forces in the Mediterranean Ocean, but American ground forces. U.S. involvement in Syria and Iraq from 2014 to the present exemplifies the central role of landpower in a nation’s national security and shifting political objectives. Landpower maintains a primary national security role as a means of brute force and coercion and as an instrument of war termination, highlighting the tension between the use of landpower for its destructive force and its stabilizing capacity. Ultimately, credibility and flexibility enable an army to achieve political objectives, and landpower provides both.

Until October 2019, the mere presence of U.S. and coalition ground forces served as a deterrent to Turkey, effectively preventing Turkish offensive operations against Kurdish partners. Not unlike Sun Tzu’s maxim on winning without fighting, coercion seeks to alter an adversary’s behavior through the threat of future pain. In 2014, then-President Barack Obama sought to stem the growth of ISIS by employing US airpower to destroy ISIS’s means to wage warfare across the Levant and protect Iraqi sovereignty. The political objectives focused on ISIS’s military capability, and not on ISIS’s conquered territory across Syria and Iraq. In this scenario, both U.S. political objectives and means were limited. The later introduction of U.S. Special Operations ground forces into Iraq and Syria sought to alter ISIS behavior – to compel ISIS forces to retreat and to return sovereign territory back to Iraq and Syria or face the combined forces of coalition landpower. Tami Biddle argues that landpower is an essential component to coercion through the threat of brute force. “The ability of ground armies to land on enemy soil, defeat the adversary’s forces and bodily remove the existing leadership – i.e. the threat of brute force – provide a coercive tool that is without parallel in the conventional realm.” The United States was not the only international actor entering into Syria.  Russia and Iran overtly introduced ground forces under the guise of assisting the Syrian regime, but also to serve their political interests and shape potential U.S. involvement through their own form of coercion.

As a component of coercion, landpower’s role in credibly supplying the means for a campaign of brute force is critical to many theories of victory. Joint Publication 1 describes aspects of victory requiring landpower as “defeat of an adversary’s armed forces, the destruction of an adversary’s war-making capacity, and/or the seizure or retention of territory.” With the entrance of American ground forces in Northern Syria in 2015, their purpose as an instrument of brute-force was clear: to defeat ISIS’s armed forces and seize key terrain. They would be used to force compliance from ISIS fighters. The coalition efforts exemplify the message from BG (Ret) Wass de Czege regarding “eliminating the enemy’s option to decide how and when the war ends.”  While landpower alone did not defeat ISIS, coalition ground forces’ ability to defeat ISIS ground forces and seize terrain set the stage for conflict termination.

Landpower forces continue to lead as offensive maneuver transitions into stabilization and conflict termination. As ISIS forces were being forced out of Northern Syria, U.S. Army and coalition ground forces assured governance and economic viability in an environment easily characterized as volatile, uncertain, complex, and ambiguous. In its conflict termination role, landpower sets and controls the tempo of post-conflict affairs. In Northern Syria, while the Department of State comprised an element of the post-conflict presence, landpower forces played a key role. Ground forces rapidly shifted their efforts to reconstruction as they had physical access to the terrain, population, and key centers of the economy and infrastructure. This role in governance and reconstruction is nothing new. Despite the U.S. Army’s structural bend towards large-scale combat, the U.S. Army has repeatedly found itself rebuilding nations and establishing governance post-war. Like it or not, presence on the ground matters, and therefore landpower forces always have a role to play in strategic decisions before, during, and after conflicts.

The absence of credible landpower leads to a limited ability of a nation to achieve its political objectives.

What are the implications for landpower and the U.S. military moving forward? For one, credibility is essential. Credibility is the ability to accomplish what you say you can do. In the case of landpower forces, is the landpower component staffed, trained, equipped, and experienced enough to accomplish its missions? If so, then the force is credible. Risa Brooks describes military effectiveness as a component of military power in a similar manner, focusing on the attributes of integration, responsiveness, skill, and quality. An effective force will be a credible force. The U.S. and coalition military in Syria demonstrated credibility in their ability to operate against ISIS as an instrument of brute force, but also used its credibility to coerce both Turkey and Russia to avoid direct confrontations with the United States and its partners.

The absence of credible landpower limits a state’s ability to achieve its political objectives. As a consequence, and for whatever other reasons for the decision, the removal of U.S. and coalition forces from the Syrian-Turkish border potentially places other political objectives at risk.

A nation’s army must be flexible enough to present a credible threat, while also remaining able to accomplish political objectives that are not related to ground combat. In this instance, flexibility is the capability of an army to accomplish a myriad of tasks and missions consistent with political objectives, and, as needed, accomplish them simultaneously. Nadia Schadlow argues that governance is an essential Army and landpower function, planned concurrently with ground combat. There is risk with a flexible army. A flexible force could undermine an army’s ability to be credible when needed. Can a force be both lethal and compassionate? Can it destroy cities and enemy forces and then secure elections and clean water for displaced persons? Based on the political objectives assigned to landpower, it must be flexible to accomplish the range of military options required by national security leaders.

The attributes of landpower at times seem implicit, meaning landpower is the ability to gain, sustain, and exploit control over land, resources, and people implying primarily a lethal combat force based on physical access to the terrain. However, when those attributes are left implicit, there is room for expansion to areas where landpower is not appropriate, which introduces strategic risk, and extends an army beyond its ability to achieve political objectives. Should landpower forces oversee elections? Should they be responsible for the modern transformation of a foreign military? Develop a nascent judicial system in a foreign country? Possibly, however a frequent use of landpower forces outside of the realm of lethality may indicate misaligned strategic priorities, akin to recent disagreement between administration policies and military priorities in Northern Syria. The deployment of landpower forces could lead to overextension, exhausting resources for unclear objectives, and risking the credibility of the forces. While the above section highlights the necessity to be flexible, overtasking landpower forces ultimately reduces its ability to serve as either an instrument of coercion or brute force. Policymakers should remember that whatever military personnel might do, coercion and the threat of brute force are landpower’s primary utility.

Tracing the political decisions to counter and ultimately defeat ISIS reveals the centrality of landpower to national security. Landpower forces served to both coerce and defeat ISIS military capability through brute force. Landpower forces did not act alone, but the most critical and sensitive national security decisions revolved around when and where the United States should place “boots on the ground”. Why? To paraphrase Tami Biddle: deployment of an army cannot be ignored and requires response. As the United States wrestles with the prioritization of domestic and foreign policies, the placement and posture of its army may serve as the best indicator of strategic priorities.