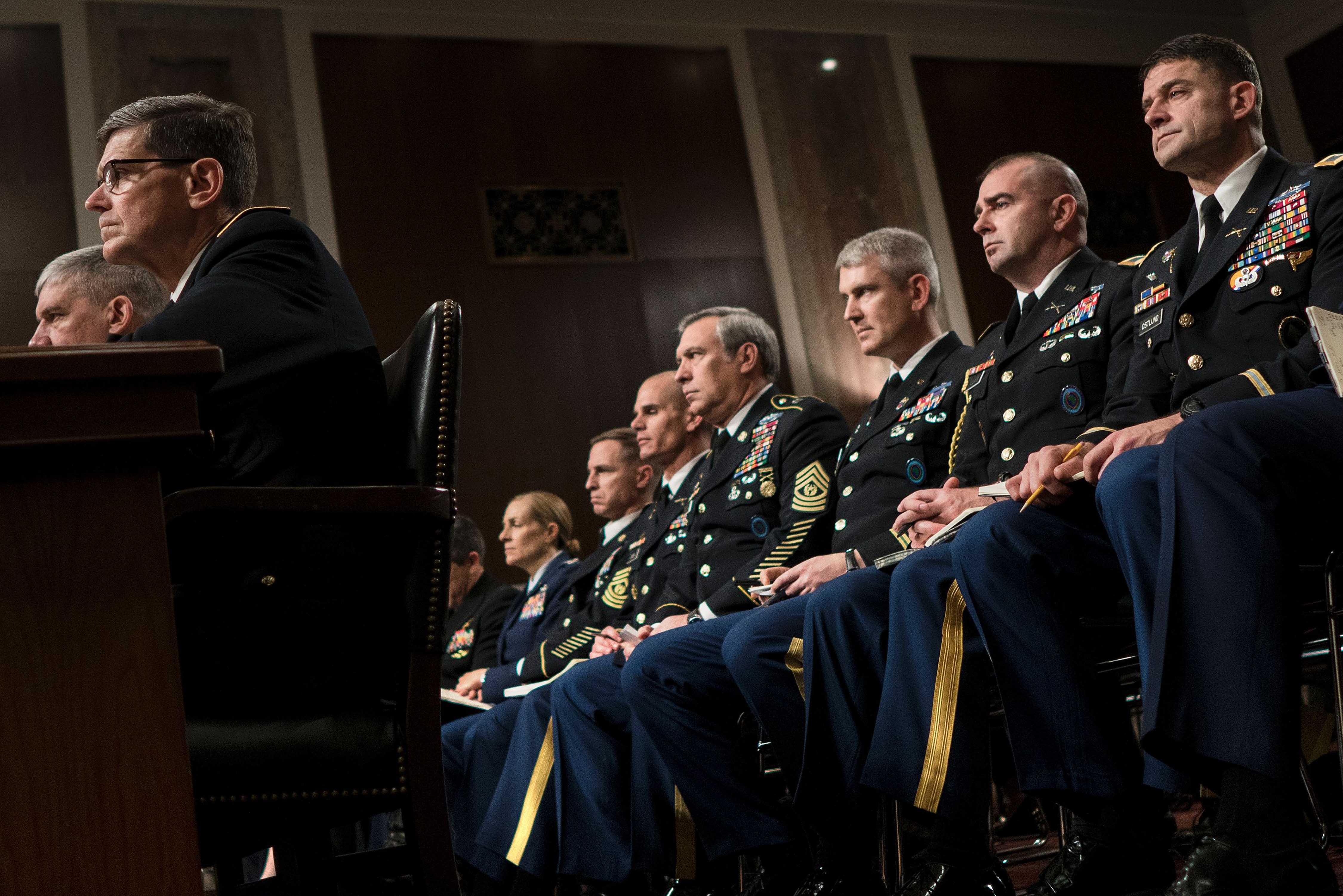 Increasing minority and female representation in combat arms branches is necessary—but it is not sufficient to improve diversity at higher ranks in the Army. In other words, the concept of the Army as a meritocracy is a myth.

Despite substantial progress integrating minorities and women in the Army, any claim that the Army has reached its egalitarian, meritocratic ideal is premature. Responding to a question regarding the lack of diversity at senior ranks within the Army, a senior leader visiting the Army War College extolled the virtues of the Army’s meritocratic promotion system and suggested that increasing diversity in combat arms branches, especially infantry, would resolve the disparity. With increased diversity in these occupational fields, this perspective suggests the inherent meritocratic nature of the Army’s promotion system will ensure more minorities and women matriculate to the highest ranks in the service. However, social science research shows that this will likely not completely fix the Army’s representation problem. Increasing minority and female representation in combat arms branches is necessary—but it is not sufficient to improve diversity at higher ranks in the Army. In other words, the concept of the Army as a meritocracy is a myth.

Increasing diversity in combat arms branches is necessary because those occupational fields, especially infantry, enjoy significantly higher promotion rates. Fiscal Year (FY) 2016 promotion results to colonel exemplifies this disparity. In FY2016, the overall promotion rate to colonel was 41%, but infantry branch led all occupational fields with a 60% rate. These skewed rates result in a general officer corps consisting of proportionately higher percentages of infantry and combat arms officers. A quick look at the Army’s eleven 4-star generals confirms this trend and reveals that eight are infantrymen, two are armor officers, and the one support officer began his career as an infantryman (as of 30MAY17). Consequently, due to disproportionately high promotion rates in branches such as infantry, any effort to increase representation of minorities and women at higher ranks likely needs to ensure these select branches have appropriate levels of minorities from which to select senior officers.

Barring substantive change to the infantry-dominated culture of the Army, enticing/forcing more minorities and women into select branches is necessary for improved diversity—but it is not sufficient. Although overt discrimination against women and minorities has steadily declined, modern forms of discrimination pose an insidious, often unconscious, challenge to meritocracy. Once in these branches, minorities and women will have to contend with barriers to promotion that their white male counterparts do not.  These barriers stem primarily from three sources: 1) the bias inherent to subjective ratings, 2) stereotype-based behavior, and 3) lack of social networks that facilitate access to important opportunities for skill acquisition. Consequently, the “meritocratic” Army is an ideal, not a reality.

The term “meritocracy” assumes a certain level of objectivity and fairness in the current performance evaluation system. Officer performance in the Army is measured with the Officer Evaluation Report (OER). In Army regulations, if not in practice, the report is supported by a series of counseling sessions between rater and ratee that scope job responsibilities, identify accomplishments and areas to improve, and provide a contract of performance expectations. At the end of the rating period, an officer’s performance and potential is assessed by the individual’s direct and 2nd level raters. Although the Army regularly updates the format to increase objectivity and induce variability among ratees, the process remains fundamentally susceptible to human subjectivity. Unfortunately, the objectivity and fairness assumption is probably unjustified.

Research suggests that true objectivity in performance evaluations is elusive and that minorities and women will face challenges to career progression at multiple levels. An abundance of research suggests that ratings are influenced by how similar the ratees are to the raters. “Ducks like ducks,” goes an old saying. Social identity theory explains why and how this happens. This theory posits that people categorize themselves and others based on surface level characteristics (e.g., race and gender) in order to ascertain who is “one of us” and who is not. This automatic categorization is seen as an inherent part of human socialization; however, it has important implications for performance ratings. Individuals are motivated to see themselves in a positive light and therefore evaluate those who share group membership with them positively as well. Those who are similar (i.e., the in-group) are therefore evaluated more positively on balance than those who are dissimilar (i.e., the out-group).

Moreover, those who are in the out-group are perceived as being more similar to each other than those in the in-group. This phenomenon is referred to as outgroup homogeneity and explains why, for example, many people state that those in an out-group “all look the same.” The outgroup homogeneity effect is the basis for stereotypes. Stereotypes influence implicit beliefs regarding both surface level characteristics and work roles, such as perceptions of fit among individual characteristics, behavior, and role expectations. Role congruity theory explores this dynamic and suggests that perceptions of incongruity (e.g. woman leading an infantry platoon) results in systematic differences in perceived performance.

The hyper-masculine, White male dominated Army presents an environment where marginalized group members experience challenges that others do not.

Taken together, these theories suggest a fundamental challenge to the ideal of an objective meritocracy in the Army. As discussed, officer performance reports determine promotion potential and are inherently subjective. Assuming they are not overt racists/misogynists, raters still must guard against implicit bias influencing their evaluations of others—of which the negative effect on minority and female careers is likely substantial.

Such biases not only affect raters–they influence the behavior of marginalized individuals themselves–the second obstacle to an Army meritocracy. Stereotype threat, which scholars define as “fear of being judged and treated according to a negative stereotype about members of your group,” is also highly relevant to improving minority performance in under-represented positions. Scholars’ findings suggest that stereotype threat is linked to decreased performance, anxiety, and negative affect. For example, a lone female soldier in an infantry squad might be cognizant of a negative stereotype regarding female soldiers. Subsequently, she might become anxious, use limited resources ruminating about others’ perceptions, and fail to perform to her potential, thereby fulfilling the stereotype.

In addition to coping with stereotype threat, women and minorities oftentimes must behave in ways that both confirm and deny stereotypes simultaneously. For example, women in leadership positions face the “double bind paradox,” which suggests that female leaders must behave in an agentic (e.g. masculine, dominant, assertive) manner to meet the expectations of the leadership role while simultaneously behaving communally (e.g. feminine, friendly, trusting) to meet gender role stereotypes. Behavior incongruent with these expectations can result in negative appraisals from others and self-criticism from the individuals themselves. The principles supporting both stereotype threat and role congruity theories can apply to any marginalized group member in settings that make their differences salient. Considering that the Army, and especially senior ranks, is disproportionately white and male, marginalized group identities are often salient, thus increasing the likelihood that women and minority group members will experience the negative effects of stereotypes. These negative effects could influence their performance and wellbeing, again casting doubt on the meritocracy ideal.

Beyond the effects of bias and stereotypes on evaluations and performance, institutional sources of bias can also negatively influence the actualization of the meritocracy ideal—the third barrier. For example, minorities and women are less likely to enjoy the benefits of mentorship. Mentors can provide valuable feedback and guidance to young leaders to increase performance. Additionally, mentors can establish conditions of increased visibility and opportunity for mentees. Consequently, minorities and women in the Army are, on average, at a disadvantage when compared to their white male peers.

Social networks are also influential in career progression, providing informal support and access to particularly impactful jobs. Again, minorities and women are less likely to be fully accepted into the dominant group’s social networks and enjoy their accompanying benefits. Thus, these institutional forces cast even more doubt on the meritocratic ideal.

The Army should be proud of its efforts to increase diversity within its ranks. African Americans have served proudly in uniform since the America’s war of independence. President Truman ended segregation in the Armed Forces decades before the nation followed suit. 24.1% of enlisted personnel are African American—well above the 14% in the national population. Regarding women, the Army’s active force is currently only 14.2% female but has recently opened all combat occupations to women. Yet there remain significant opportunities for further progress. Women comprise 20% of junior Active Army officers (O1-O3) yet only 6% of general officers (O7-O10). Racial/ethnic Minorities comprise 26% of junior Active Army officers yet only 16% of general officers. These statistics support findings that women and minority officers are promoted at lower rates and women leave the Army sooner than white men.

Addressing these barriers to promotion for minorities and women in the Army requires an appreciation of their complexity. The following is a list of recommendations for the Army to embrace as it strives to achieve the meritocratic ideal:

The belief that increasing diversity in combat arms branches is a panacea for the dearth of minorities and women at senior ranks oversimplifies a tough problem. The hyper-masculine, white male dominated Army presents an environment where marginalized group members experience challenges that others do not. Education, sustained effort, and senior leader commitment are critical to adjusting the culture to better approach the meritocratic ideal.