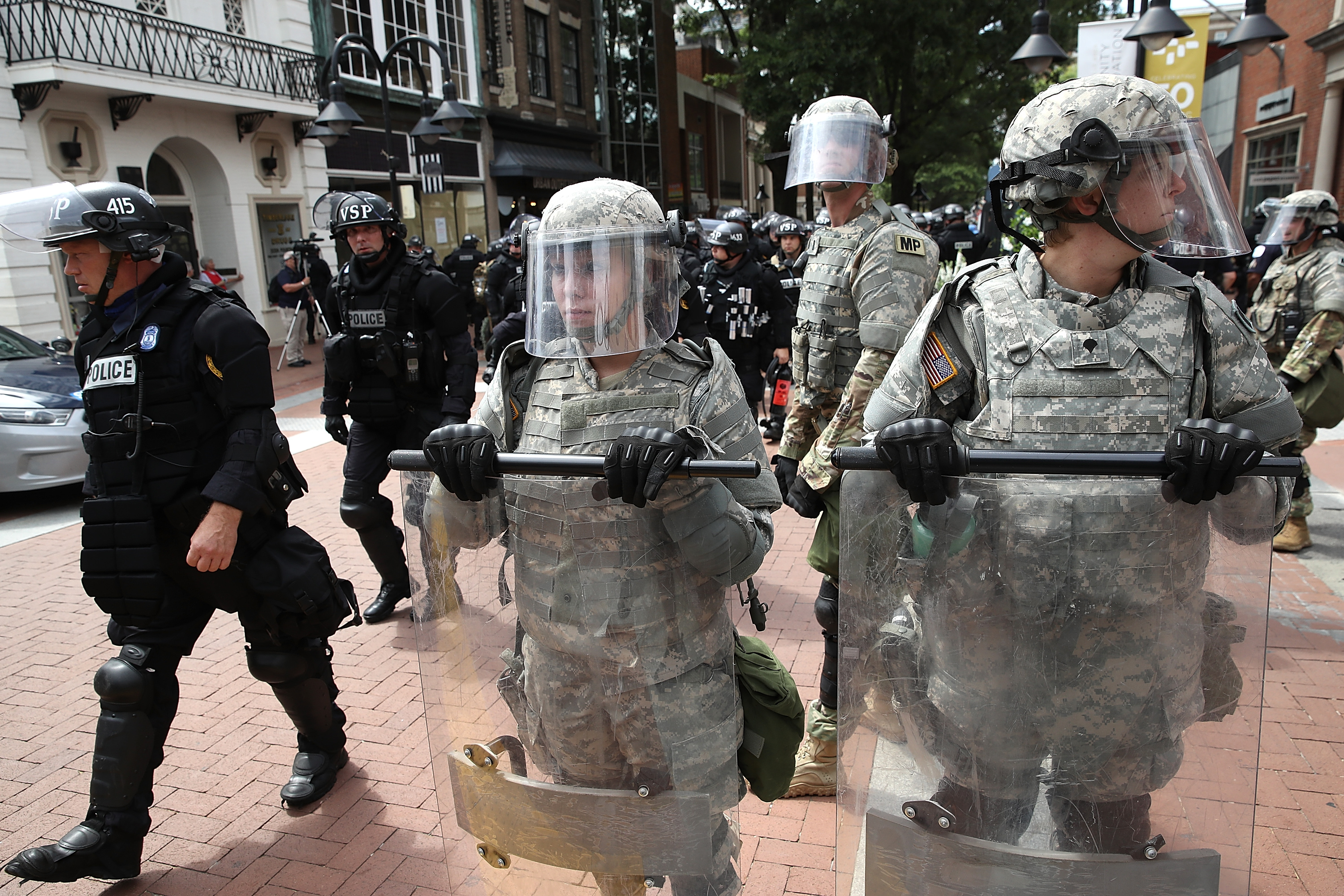 Multi-domain battle follows a familiar but fallacious assumption of U.S. forces’ playing an ‘away game’

The security we have historically enjoyed between two oceans and with well-meaning neighbors to our north and south can no longer be relied upon. The new reality is clear: our adversaries, realized and potential, have declared and demonstrated intentions and capabilities that can impact our country directly, immediately, and disastrously.  However, recognition of a vulnerability is not enough. The battle concept for developing and employing the land component of the nation’s defense must provide specifically for Army operations in the U.S. homeland, across multiple domains.

What is Multi-Domain Battle (MDB)? At its core, MDB focuses on conventional warfare against a peer adversary. The development of MDB is an acknowledgement of the post-Cold War drift away from preparedness for a high-intensity battlefield, which has continued with the counterinsurgency (COIN) lens that has characterized operations over the last 15 years. The U.S. Army/U.S. Marine Corps Multi-Domain Battle White Paper forecasts areas in which realized or potential adversaries may match or “overmatch” our forces’ capabilities, and laments a loss of close fight expertise the ability of the U.S. military to confront a peer adversary. Multi-Domain Battle seeks to create temporary windows of advantage that can be exploited by another domain; for example, a cyberattack may allow aircraft to attack through an air defense network unharmed for a specified period, which could, in turn, open a brief opportunity for the uncontested maneuver of ground forces.

Multi-Domain Battle depicts potential adversaries as opportunistic and agile. The White Paper asserts that adversaries will “use deception, surprise…speed…[and a variety of elements of national power] to exploit seams within established U.S. operating methods.” Having studied us well, adversaries will seek advantage in an environment of “contested norms,” using “any and all elements of power to establish their own set of rules unfavorable to the United States and its interests.”

Missing from the White Paper is the consideration that an agile and informed adversary will bring the fight to our homeland, especially during mobilization and deployment. In a recent memo to his commanders, the Chief of the Army Reserve, Lieutenant General Charles D. Luckey, observed that there are “new wolves…circling the sled.” Having served as Chief of Staff of the United States Northern Command, LTG Luckey may question the reluctance of the wolves to attack the sled at home.

MDB follows a familiar but fallacious assumption of U.S. forces’ playing an “away game.” The U.S. military is assumed to seize the initiative to exploit cross-domain engagement, without sufficiently acknowledging that enemies also have freedom of action. Especially for the land component, the active-layered-defense-in-depth approach that defines the current concept of homeland defense seems to lose its focus as we move inward from the forward regions and approaches to the homeland itself. As we move across domains from the physical to the virtual (e.g., cyber, information, and even cognitive), the failure to focus on the danger within our shores is less and less understandable. The idea that the U.S. homeland can be continuously attacked across all “phases” of an operation from an adversary’s homeland should not be surprising. Neither should the fact that an enemy’s strategic attack against our homeland could have tactical, operational, and strategic implications for our operations, most especially during mobilization and deployment.

The prelude may have already begun. In April of this year, the “United Cyber Caliphate,” a group of hackers linked to the Islamic State in Iraq and Syria (ISIS), published a list of 8,786 names and addresses of citizens in the United States and the United Kingdom, with an accompanying instruction to “[k]ill them wherever you find them.” Russia, China and Iran are routinely probing the United States’ power grids for digital vulnerabilities, potentially paving the way for attacks like those that cut power to a quarter of a million people in the Ukraine in the winter of 2015. A spokesperson for the United States Southern Command estimated that in 2015, 30,000 officially designated “Special Interest Aliens” from “countries of terrorist concern” entered the U.S. across our border with Mexico. At the same time, U.S. senators were sponsoring legislation reflecting growing concern over terrorist and criminal organizations operating on the Canadian border. The trends are varied, but uniformly alarming.

[MDB] must be expanded to include the prospect of a contested homeland … [INVOLVING] enormous logistical challenges, exacerbated by a thinking enemy in the very midst of our people.

In the early stages of conflict, adversaries seek to remain below the threshold of war, interfering with U.S. abilities to mobilize and establish operations in all domains. They would also try to drive a wedge between the U.S. military and U.S. law enforcement at home. Steps must be taken now to close that seam of ambiguity. Recent experiences with military assistance to civilian authorities (in Houston and elsewhere), wargames, and other forums have left an overwhelming impression that operations conducted within the territorial confines of the U.S. will be extremely complex. Furthermore, preparing for that complexity requires more than just the military, given the unique legal limitations on military activity in the United States. But the military’s role in planning for domestic operations is essential.

This year, a team of students and faculty at the U.S. Army War College are studying Contested Deployment, an examination of the U.S. military’s ability to counter a deliberate campaign to interrupt or otherwise debilitate the country’s ability to alert, mobilize, and move our forces from within the United States to air and sea ports of embarkation. This study arises from justifiable and growing concern about potential adversaries’ use of Anti-Access (A2) and Area Denial (AD) systems and tactics against our forces. The Contested Deployment study will bring the problem home. The study is in its early stages, but an expanding list of questions is forming as its framework. What impact would an attack on critical infrastructure, shared by the military and by both the public and private sectors, have on our ability to move convoys to their ports? What about the ability to operate from those ports? What additional planning and coordination needs to take place now to dissuade the public and its leadership from concerns over deploying components of the armed forces, when it may appear that those forces are needed here? What preparations will be required to soothe the concerns of those forces when questions over the wellbeing of their families and loved ones arise as they are walking out the door? What kind of strategic communication campaign will be required to maintain the trust and confidence of the American people, in the face of crises that are either real, imagined, or manufactured? What additional steps will be needed to bolster hometown support of service members as they deploy?

Perhaps inadvertently, the developers of Multi-Domain Battle have introduced a notion of how to begin meeting these sorts of challenges. They acknowledge in the White Paper that “U.S. ground combat forces, operating as part of a joint, interorganizational [emphasis added], and multinational teams, are currently not sufficiently trained, organized, equipped, nor postured to deter or defeat highly-capable peer enemies to win in future war.” Interorganizational refers to “United States Government departments and agencies; state, territorial, local, and tribal agencies; foreign military forces and government agencies; international organizations; nongovernmental organizations; and the private sector.” How the military interacts with the domestic component—state, territorial, local, and tribal agencies; the public and private sectors—will either facilitate or hinder vital cooperative functions to prevail over the enemy. “What component(s) of the military are best postured to orchestrate that cooperation at home?” and, “How will it be orchestrated?” are questions every bit as compelling as, “How will we prevail against the enemy ‘over there’?’” This may indeed call for “multifunctional battle teams” but teams unlike the ones envisioned in the concept. It may require teams drawn from active and reserve components—the Service Reserves and the Guard. It may necessitate that they be skilled in functions beyond those associated solely with matters of defense. It may demand that their members be able to move as easily in circles defined by “command and control” as those driven by “cooperation and coordination.” But whatever the demands, the teams need to be identified, trained, and teamed with counterparts across the civil sectors.

Multi-Domain Battle is a productive, evolutionary concept that will help the U.S. military operate effectively in a future which will indeed challenge the norms of the conventional field of battle. To complete the thought and account for windows of vulnerability however, it must be expanded to include the prospect of a contested homeland. These preparations will carry inter-organizational demands far more complex than any faced by our forces in the Modern Era, because they will involve enormous logistical challenges, exacerbated by a thinking enemy, in the very midst of our people.

Preparations for battle must begin in the homeland. The homefront will probably be part of the next major battlefield, and the price of poor preparation will be paid by soldiers and civilians alike. To ensure U.S. forces are organized, trained, equipped, and postured, we must develop battle concepts that consider the domestic battlefield. We cannot win “over there” if we lose “over here.”

Photo: Police and members of the National Guard patrol near the location where a car plowed into a crowd of people marching through a downtown shopping district August 12, 2017 in Charlottesville, Virginia.