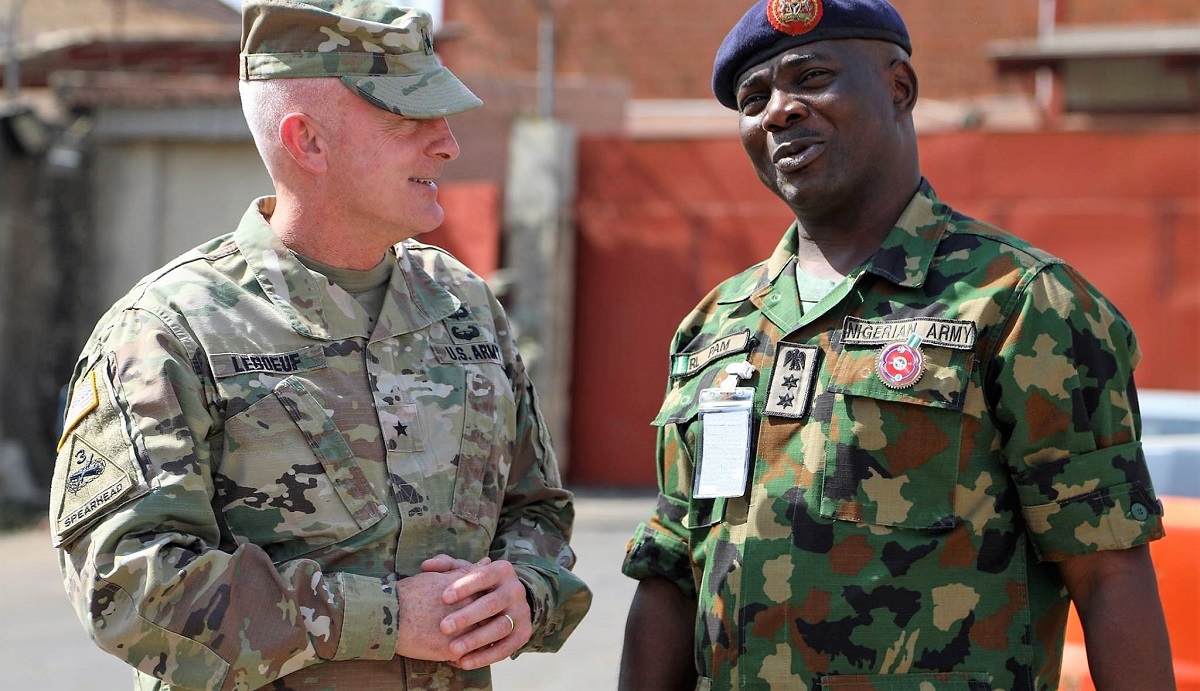 The 2017 NDA directed a transformation in the way the DoD plans and implements security cooperation.

Multi-Domain Operations (MDO) require strong operational integration with allies and partners. In turn, the Army’s strategy includes a line of effort to “strengthen alliances and partnerships” to continue building interoperability among partner nations and to maintain enduring relationships. One of the key resources for fulfilling this line of effort is the Army’s corps of Foreign Area Officers (FAO), a community of regionally focused experts in political-military operations. FAOs have advanced language skills, cultural understanding, and the ability to advise senior military and civilian decision-makers. They require highly specialized training, education, and experience to fulfill their responsibilities. However, recent discussions include recommendations that may negatively impact the FAO community’s ability to acquire and sustain that expertise.

Critics of failed security force assistance (SFA) endeavors in Iraq and Afghanistan question the general efficacy of Department of Defense’s (DoD) (and specifically the Army’s) security cooperation programs. But the U.S. remains committed to security cooperation as a way to ensure other nations have the capacity to provide for their own security to reduce dependency on the U.S. for it. To that end, the National Defense Authorization Act of 2017 directed a transformation in the way the DoD plans and implements security cooperation. U.S. Army General Mark Milley indicated that the training and equipping of partner nation militaries will continue to increase in the future. As the DoD service with the greatest responsibility for planning and conducting security cooperation, the U.S. Army must prepare to meet future demands by training and employing Foreign Area Officers to strengthen partnerships and deter aggressors.

However, an emerging view holds that the Army must choose between foreign area specialists and one-dimensional combat arms officers. While the Army explores new concepts to support SFA, one proposed solution is for the Army to return to an era when officers could dual-track their careers as both combat arms officers, and also as regional specialists for SFA operations. Suggesting that failures in Iraq or Afghanistan justify this type of an institutional change is to lose sight of the reason the Army created and invested in the FAO corps in the first place. Dividing careers between two divergent paths risks eroding the specialized development that FAOs need to perform their unique missions.

Commonly referred to as the Army’s “soldier-statesmen,” FAOs are often the only U.S. Army representatives — and at times the only Department of Defense entities — in some host nations. FAOs fulfill representational duties as attachés or manage engagements with partner nation security forces through security cooperation. In addition to serving at various overseas locations, FAOs also serve on the Joint Staff, in the Office of the Secretary of Defense, at the Department of State, in Geographic Combatant Command headquarters (GCC), in Army Service Component Commands, and with the Army Staff, where they rely on regional expertise and experience to inform senior leaders.

The Army professionalized the FAO corps to meet a growing demand for regional specialists. The current FAO corps traces in roots to the post-World War II Language and Area Training Program (LATP). The LATP underwent several modifications throughout the Cold War, eventually manifesting as a combination of programs during Vietnam: Foreign Area Specialty Program (FASP) and the Military Assistance Officer Program (MAOP). The renewed focus on advising partner nation militaries during Vietnam was a driving factor in the creation of the MAOP. Advising and assisting partner militaries required the creation of officers specifically trained for that mission. The MAOP largely consisted of officers from the precursors to Civil Affairs, Psychological Operations, and Special Forces, which are all currently single-track careers. In 1972, the two programs merged and became the FAO Management System, eventually coalescing into the modern FAO career in 1985. The Army Officer Professional Management System (OPMS) XXI review in 1997 finally consolidated FAO into a single-track career, capturing concerns that officers in the dual-track system were not ‘both’ branches, but were ‘neither.’

Today, the Army FAO corps is the pillar of excellence in the joint FAO community. Many Army FAOs underscore that the single-track system produces an Army FAO corps with greater understanding of political and cultural dynamics and greater understanding of the U.S. Interagency process. Similarly, the single-track system benefits other branches such as Aviation and Special Forces, both of which equally rely on specialized expertise but which suffered under prior dual-track career systems of their own. Unlike the Army, the Air Force continues to dual-track the FAO career, systematically withdrawing officers from FAO assignments and rotating them through operational units. As a result, Air Force officers do not have the opportunity to sharpen their security cooperation skillset and must compete for advancement in two career fields. In an era when FAOs are in growing demand, regional specialists must remain eligible for repetitive assignments within their respective regions so as to cultivate the resident knowledge necessary to advise senior leaders.

Ed Ballanco’s recent article, Security Force Assistance Needs the Stilwell Combination,  suggests that basic branch officers would be better prepared for future SFA missions by earning “skill identifiers” and advanced degrees similar to FAOs. This demonstrates a misunderstanding of how FAOs contribute to the Army and the Joint Force. After all, in the 1980s, the Army struggled with the distinction between ‘trained FAOs’ and ‘skill identifier FAOs.’ The result was a disparity in preparing officers for overseas assignments to fulfill the growing demand for political-military experts. His example of General Joseph Stillwell as a model represents less of a justification for a return to the past than more of a reason to grow current Army broadening programs. To better prepare for MDO, the Army should prioritize preparing leaders to understand the strategic environment. There should be greater emphasis on expanding Military Personnel Exchange Programs and participation in Schools of Other Nations. The multinational response to the 2010 earthquake in Haiti illustrates the return on investment of these exchange programs:

In October 1984, then-Captain Keen, S3 Operations Ofﬁcer for 1st Battalion, 325th Airborne Infantry Regiment, participated in a one-month exchange program with the Brazil Airborne Brigade in Rio de Janeiro, Brazil. During the exchange, Keen met then-Captain Floriano Peixoto, assigned to the Airborne Brigade as a Pathﬁnder instructor. The two initiated what would become a long-standing relationship developed over several parachute jumps and dismounted patrols. Little did either junior ofﬁcer know that 26 years later they would be general ofﬁcers working together to provide relief and assistance to earthquake-stricken Haiti.

Here, we must address the distinction between broadening opportunities and dedicated career tracks. Ballanco rightly suggests that basic branch officers must pursue broadening assignments to better understand the operational environment. But he suggests that to achieve this “the Army must choose between foreign areas specialists without adequate tactical experience and one-dimensional combat arms officers who lack broadening.” On the contrary, the Army is evolving its doctrine to adapt to the future strategic environment; regressing to a prior era is not the solution. Then-Captain Keen would eventually move on to serve in several FAO-type assignments, but his early experience as an exchange officer shaped his ability to engage with multinational partners. Interestingly, when LTG Keen served as the Joint Force Commander in response to the earthquake in Haiti, he benefited from having career FAOs on his staff coordinating and assisting the multinational response. FAOs serve a special function not filled by mere broadening assignments. The Army must leverage and expand existing programs and opportunities, just as then-Captain Stilwell and then-Captain Keen did, and encourage more basic branch officers to participate in exchange programs to build long-lasting relationships.

The updated doctrine from U.S. Army Training and Doctrine Command (TRADOC) identifies specific capabilities that the Army must develop or improve to contribute to the Joint Force in MDO. As the U.S. seeks to expand the competitive space throughout the strategic environment, MDO addresses preparing the operational environment by building partner capacity, improving interoperability, and building partners’ capabilities to defeat increasingly sophisticated threats. These are core FAO tasks. FAOs contribute to the Army and MDO through forward presence with host nations and in repetitive assignments within their combatant commands’ areas of responsibility. In addition to serving as political-military advisors to ambassadors and general officers, they contribute to planning and implementing security cooperation. They help integrate the commands’ activities with State Department security assistance programs, with building partner capacity, and with humanitarian aid programs — all critical components of shaping the strategic and operational environment for MDO.

Security force assistance is a subset of overall security cooperation initiatives and simply training combat arms officers to be SFA leaders demonstrates a misunderstanding of the holistic nature of security cooperation. Far beyond just imparting tactical skills, MDO and the security cooperation activities which support them seek to create dilemmas for the enemy through a variety of ways and means, ultimately strengthening a partner nations military capabilities. These security cooperation activities include contributions from the Joint Force, such as Marine Corps Forces South or 12th Air Force, which participate in ongoing Subject Matter Expert Exchanges, Security Force Training Teams, and Mobile Training Teams that range from technical communications, maintenance training, and human rights training, all which occur under the auspices of a forward-deployed FAO who understands and orchestrates the cross-service actors’ contributions to the theater campaign plan. Rotational Army units, special operations forces, and National Guard State Partners also contribute to overall security cooperation activities. Further, security cooperation incorporates institutional development such as the Defense Institutional Reform Initiative and the Institute for Security Governance. These strategic engagements are often transparent to the small team conducting SFA at the battalion, brigade, or division level.

Ultimately, FAOs serve at the nexus of the Army’s Multi-Domain deterrence where they coordinate the Joint and Interagency efforts to strengthen partnerships and counter threats. FAOs must do a better job educating the Army on their role within the Joint Force, MDO, and how they best support the Army’s and the DoD’s strategy. As dedicated regional experts, FAOs are the strategic scouts to the Army, Joint, and Interagency communities, who incorporate SFA within a holistic security cooperation plan that supports priorities within the National Defense Strategy. As the Army evolves its doctrine to adapt to the changing strategic environment, it should not regress to an era where regional experts were under-developed. Instead, a dedicated, single-track corps of FAOs can provide the Army a forward presence to expand the competitive space and shape the environment for Multi-Domain Operations.

MAJ Ryan Kertis is a U.S. Army Foreign Area Officer currently assigned to United States Southern Command. He previously served in the Security Cooperation Office, Santiago, Chile. The views expressed in this article are those of the author and do not necessarily reflect those of U.S Southern Command, U.S. Army, or Department of Defense.

Photo: Army Brig. Gen. Eugene J. LeBoeuf, the U.S. Army Africa acting commanding general, meets with Col. R.L. Pam during an equipment handover between the U.S. Embassy to Nigeria and Nigeria army’s 20th Infantry Battalion in Abuja, Nigeria, Nov. 29, 2017. LeBoeuf’s engagement in Nigeria also included a senior leader visit with the U.S. ambassador to Nigeria and Nigeria’s chief of army staff and a speech to students at the Nigeria Army War College. Courtesy photo from the U.S. Embassy and Consulate in Nigeria