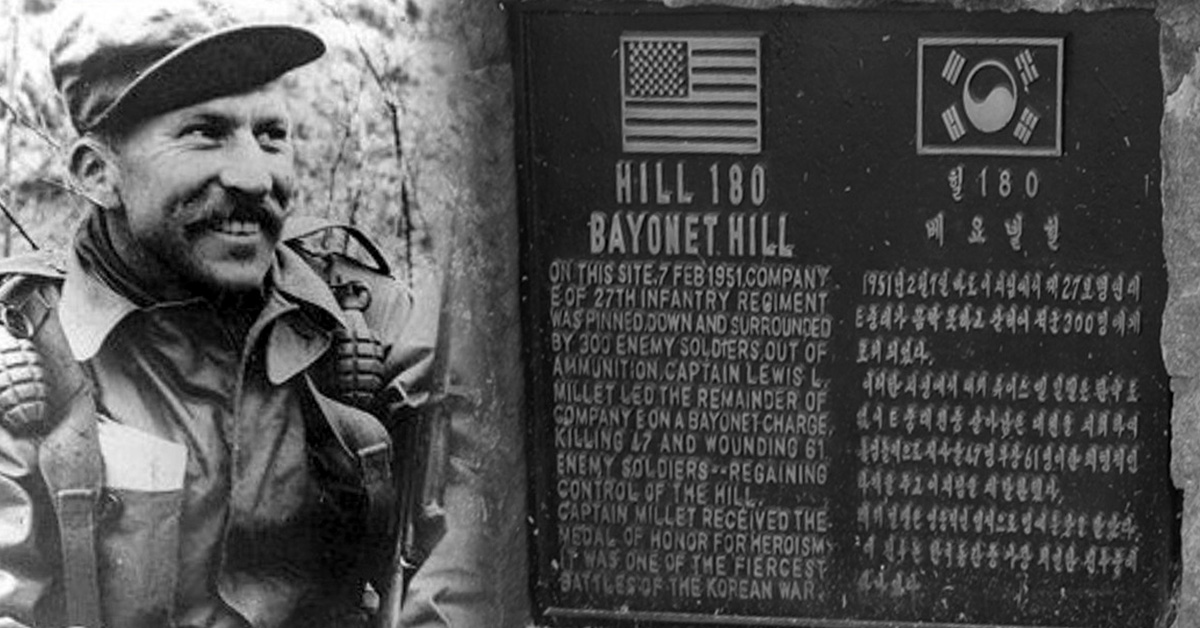 On February 8th, 2019, the Eighth U.S. Army Facebook page celebrated the previous day’s anniversary of the Battle of Bayonet Hill. Every year, army units stationed at Osan Air Base (AB) celebrate what historian S.L.A. Marshall called in his book Battle at Best “the most complete bayonet charge by American troops” since the Civil War. Though a twentieth-century bayonet charge featuring Medal-of-Honor worthy leadership is notable in its own right, Bayonet Hill has the additional allure of having either taken place near (as the Eighth Army post claimed) or actually on the grounds of the present air base (as claimed by a commemorative marker, a street name, public affairs articles, and the Facebook post of the local air defense battalion). Bayonet Hill is a tool for teaching leadership and building esprit de corps conveniently packaged in the proverbial backyard of units stationed at Osan AB. Indeed, it is so convenient that units have ignored clear evidence that Bayonet Hill actually took place more than a dozen miles away. This is the institutional version of the old military quip, “Never let the truth get in the way of a good story.”

Bayonet Hill is actually a great story. In late January 1951, after a short but intense shake-up of the demoralized Eighth Army, Lieutenant General Matthew B. Ridgway launched a counteroffensive to regain ground recently lost to the Communist Chinese Forces. Several weeks later, Captain Lewis Millett led E (“Easy”) Company of the 27th Infantry Regiment (“Wolfhounds”), an element of the 25th Infantry Division, in an uphill bayonet charge. Though Millett’s company lost four killed, it killed 47 enemy soldiers and took the heights. In the words of Millett, his surviving soldiers were “cocky as hell!” Millett’s courageous leadership won him the Medal of Honor.

Several years ago while stationed at Osan AB, I lived on Hill 180, the same hill that Eighth Army claims is the one that Millett and Easy Company took in 1951. One of the highlights of my earlier time at the Army War College had been battlefield staff rides, so when my doctoral program required an original leadership study, I naturally decided a Hill 180 Staff Ride would be an excellent research project located literally outside my front door. One of the local army units encouraged my quest, suggesting that it would use the product for its leader development program.

The accepted story began to unravel very quickly. I began by requesting original records from the US Army Heritage and Education Center (USAHEC). When the records arrived, however, I saw the given battle coordinates were far from the present-day Osan AB. The documents suggested the battle took place closer to Anyang, well to the north. I thought the coordinates were in error, so I then referenced Marshall’s book Battle at Best. Marshall was an official historian who had accompanied the U.S. I Corps — of which Easy Company was one small part — in February 1951. At about the time of Easy Company’s assault, Marshall was with another unit seven miles north of Suwon, which is itself north of Osan. I later traveled to USAHEC to verify this location in Marshall’s much more extensive discussion of Easy Company actions in the difficult-to-find book Operation Punch and the Capture of Hill 440: Suwon, Korea, February, 1951. Even the title makes it clear the Eighth Army was already well north of present-day Osan AB.

Easy Company’s morning reports, obtained from the National Archives at St. Louis, provide daily accounts of the unit’s position. According to these records, the unit departed from the vicinity of Osan on January 29th at 1145 and arrived in Suwon at 1430, traveling approximately eleven miles. The February 10th report states the company left Suwon on February 3th at 1315 and arrived at a grid location near Anyang (CS101414) at 1545, traveling approximately sixteen miles and remaining in that vicinity for “patrol actions” from 4-10 February. For Millett to lead a charge near Osan AB would have required him to take his company and supporting armor out of the Anyang area, travel approximately 40 kilometers south to fight, then return with no mention in the official record!

Moreover, numerous additional primary and secondary sources corroborate the location given in the company morning reports. Marshall reports conducting his after-action interviews with Easy Company in the vicinity of Anyang. Command reports and battlefield diagrams from other units record action near Anyang. USAHEC possesses two pictures of Ridgway taken several days before the Battle of Bayonet Hill, which — if the labels are correct — place the overall commander of UN already well north of Osan. These locations match the United Nations Command G3 Operations Report diagram for February 5th, which depicts the 25th Infantry Division at Anyang. Furthermore, Battleground Korea: The Story of the 25th Infantry Division states the division was in the vicinity of Anyang when Millett led his charge. Finally, the regimental paper of one of the Wolfhounds’ adjacent units noted that the same day Easy Company was wielding cold steel, Ridgway was observing front-line fighting north of Anyang.

The popular myth of Bayonet Hill on Osan AB continues, sometimes even from official sources

With this compelling evidence, I visited the Osan AB and United States Forces Korea historians. They both agreed the “urban legend” that the battle took place on the air base was incorrect. Indeed, these meetings led to the discovery in the historian’s files of a paper written by Rick Orick in 2001 that came to the same conclusion. Orick wrote that to honor Easy Company, it was necessary to rediscover the actual battle location. I set out to accomplish this with the help of a volunteer team of imagery intelligence officers. We found a Hill 180 near Anyang that perfectly matched the primary source evidence. Last year, we published our findings in Military History.

But when I took these findings to the unit that had initially supported the Hill 180 Staff Ride Handbook, the leaders rejected my conclusions. They relied on statements from Millett, who on several visits to Osan AB to commemorate and speak about the battle, stated that Osan was the correct location. How could he be wrong? In the twenty-four years between 1951 and 1975 — the earliest known instance of Millett returning to Osan — South Korea modernized at a stunning pace, resulting in massive changes to the urban and rural landscape all across the country. It seems that Millett was escorted to the wrong location at Osan AB and never questioned his hosts. The bigger mystery than why a participant did not initially recognize a radically transformed landscape decades later is how Osan AB initially came to be considered the location. A search has not yielded any documentary evidence explaining this mystery or the placement of the memorial maker.

ALSO AVAILABLE COURTESY OF THE AUTHOR — EXCERPTS OF THE G3 OPERATIONS REPORTS FROM THE UNITED NATIONS COMMAND FOR 5 FEBRUARY AND 7 FEBRUARY 1951. THESE DOCUMENTS ARE AVAILABLE AT THE U.S. ARMY HERITAGE AND EDUCATION CENTER.

Eventually, however, Millett seems to have suspected there had been some mistake. In an interview for the 1993 book, No Bugles, No Drums: An Oral History of the Korean War, Millett gave the location as “just north of Osan,” suggesting that he realized the battle did not take place on Osan AB. One year later, he told Cressie B. Johnson, one of the Wolfhounds who fought with him in Korea, that he did not remember the hill. Johnson wrote a history of the regiment’s first year in the war, in which he argued that the battle occurred instead on a Hill 80 near Anyang. Johnson noted this matched known locations of adjacent units were nearby. It is also generally supported by the evidence I collected, even though my team and Johnson differ slightly on the precise location both agree that the action took place far north of Osan. Therefore, the command’s argument that Millett’s words prove Osan AB as the location is hardly convincing. Millett later confessed doubts and another participant who conducted extensive research concluded the common belief was an error.

Nonetheless, the popular myth of Bayonet Hill on Osan AB continues, sometimes even from official sources, as seen in the Facebook posts earlier this year. I can’t blame them; it’s difficult to let go of tradition, especially concerning such a hero as Millett. However, the evidence is overwhelming, so I would like to issue the military leadership in Korea a challenge. There is yet one mystery to solve: is the Hill 180 location identified by my team or Johnson’s Hill 80 correct? The documentary evidence clearly points to their general location just a few miles apart but does not conclusively prove either. Making the final determination would be a great project for enterprising soldiers and historians.

I hope the annual ceremony continues but with the correct location acknowledged. Better yet, this discovery could be turned into a positive development. Anyang is about an hour’s bus ride from Osan AB and just a little further from Camp Humphreys. A day spent exploring the actual Battle of Bayonet Hill location, with a stop on the way up or back at the Task Force Smith Memorial would be a worthwhile training day. More importantly, an accurate account would do full justice to the valor of Millett and Easy Company, particularly the four soldiers who perished near Anyang on February 7th, 1951.