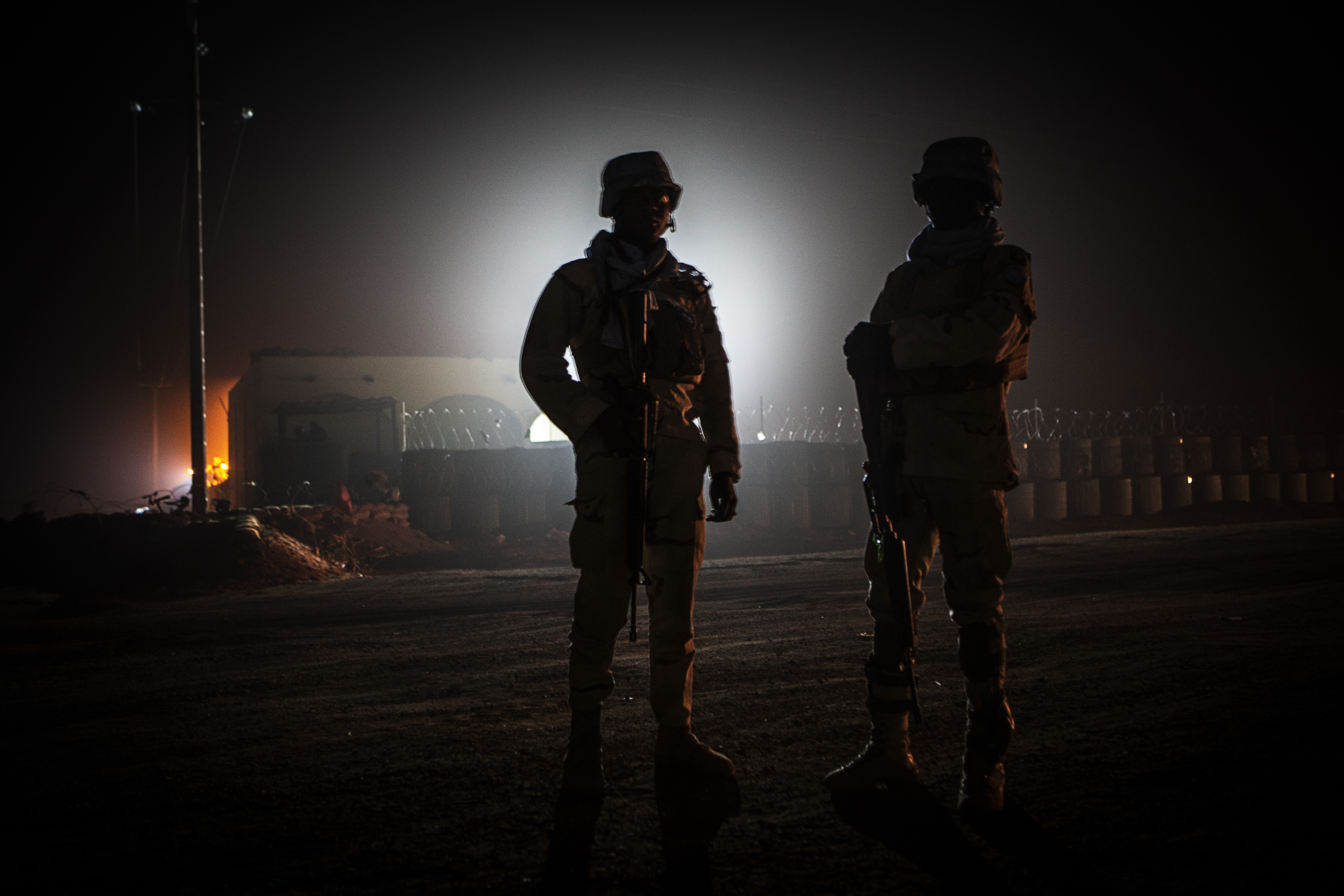 An Amnesty International report found that in 1999, peacekeepers in the United Nations Mission in Kosovo (UNMIK) paid for sex with trafficked individuals and in some cases were directly involved in trafficking. This was not an isolated situation. Our study shows that the presence of U.N. peacekeepers in a country is associated with an increase in the trafficking of individuals into that country for the purposes of forced prostitution. Moreover, there have been reports alleging that peacekeepers have abused the very people they are supposed to protect.

This undermines the hard work and dedication of United Nations peacekeepers, who have succeeded around the world in preventing the resumption of conflict and saving the lives of both combatants and civilians. Why is this occurring, and what can be done about it?  Although human rights groups have tried to understand why peacekeepers become involved in trafficking, there had not been enough systematic work done to study this relationship and the factors that can exacerbate it.

This was the goal of our recent research published in International Studies Quarterly–to understand when and how U.N. peacekeeping forces may affect sex trafficking within the host country. Using data from Human Trafficking Indicators, our cross-national study produced three key findings:

Given the clear positive effects that peacekeeping deployments have on curbing the re-emergence of conflict, the central question emerging from this research is how the U.N. and participating countries can best curb these (and other) negative consequences so as to maximize the benefits of peacekeeping operations. Below we discuss some of the central theoretical mechanisms that may be driving these effects, and discuss some possible policy changes that may help to curb these negative outcomes.

Peacekeeping forces and the demand for sex work and trafficking

At the most basic level, we argue that peacekeeping forces represent an increase in the demand for sex work, leading to increased forced trafficking of persons into the host country. Peacekeepers earn much higher pay than the locals who, in turn, may alter their everyday work habits to cater to the peacekeepers’ service needs —what is referred to as the peacekeeping economy. Sex work is one of these services for which demand increases. While some of the demand for sex work will certainly be filled by locals who are doing it voluntarily, this new market also incentivizes human trafficking to meet the increased demand.

Because peacekeeping deployments are transient in nature, peacekeepers may perceive that norms of behavior are different than at home. Peacekeepers find themselves separated from their families and partners for extended periods of time and deployed to conflict or post-conflict areas where general oversight and law enforcement may be lax. While not all peacekeeping personnel are going to engage sex workers (as paying for sex represents an illicit activity in which not all peacekeepers will want to engage), we argue that some subset will. This leads to our first finding that larger deployments, with a greater pool of potential offenders, will increase the probability of a state being a destination for sex trafficking.

In our work we draw from principal agent theory to argue that the institutional structure of peacekeeping missions can further exacerbate this problem. In the case of U.N. peacekeepers, the troops themselves are agents of both their home country and the U.N. These complicated command and control arrangements, where the troops are responsible to both national and international bodies makes it more difficult for the U.N. to monitor and punish offenders when they engage in undesirable behavior, such as paying for sex with locals or being involved in trafficking. Accordingly, we find that among countries hosting peacekeeping deployments with higher numbers of troop contributing countries, those with the more complex command and control arrangements are more likely to become destinations for sex trafficking.

Conflict of interest is also a problem. When sex trafficking and related offenses occur, troop contributing countries may be asked to investigate accusations against their own soldiers. However, contributing states have incentives to not pursue such accusations, as this would apply the stigma of sexual abuse and exploitation to their military. The risk is losing potentially lucrative future peacekeeping contracts.

Finally, we find that longer peacekeeping operations are more likely to result in an increase in sex trafficking. Given the illegal nature of trafficking, routes through which to bring individuals into a country cannot be established as easily as legal trade routes. Thus, if traffickers expect an operation to be short in duration, they may not accept the risk of establishing such routes. But, missions of longer or uncertain duration may mean traffickers are more willing to invest the necessary time and effort to establish or expand a trafficking route into a country, especially if they perceive adequate and stable demands for sex work.

Our research highlights a number of challenges. First, our work suggests that the multinational structure of many peacekeeping operations—one of the features that helps to bestow legitimacy on these efforts—may exacerbate sex trafficking and confound efforts to monitor and punish offenders. As the number of actors and the number of competing or overlapping jurisdictions increase, it may become more difficult to identify and punish guilty parties. Deploying additional civilian or military actors who are specifically charged with monitoring for sexual abuse and exploitation may improve reporting, but it does not alter the basic incentives troop contributing countries have to not punish their soldiers. Adding additional actors and agencies may also simply worsen the problem since the basic logic of our theoretical argument could easily extend to these new groups as well.

The failure to address these problems could also undermine the broader peacekeeping effort within a country. The perception that peacekeeping forces are worsening conditions and abusing the host-state population could increase grievances and pressure on the U.N. to withdraw. The illicit networks that traffic individuals may also be used by insurgent or terrorist actors for other purposes, like smuggling weapons or financing campaigns of armed violence.

Our work, along with others’, suggests that not all troop contributing countries are equally likely to exacerbate the problem of sex trafficking. Existing work has also argued that having more female peacekeepers ameliorates conditions that promote trafficking. Further work needs to be done by both researchers and practitioners on the specific factors that lead to some peacekeeping missions being more likely to be associated with sexual exploitation and abuse generally and trafficking specifically.

There are valuable lessons to be learned from other circumstances in which militaries were able to correct problems of sexual exploitation and abuse. When we repeated our analysis looking at United States military deployments instead of U.N. deployments we found that U.S. troops have no such effect on sex trafficking. We attribute this difference in part to clearer jurisdictions of responsibility and stronger oversight that U.S. forces have, as compared to U.N. peacekeepers. Importantly, while U.S. military personnel have been associated with sexual exploitation and abuse in the past, pressure from host-state governments caused the U.S. to address these problems. This suggests that reforms are possible. A better understanding of the U.S. military’s own history could shed light on how to reduce these sorts of negative externalities in U.N. peacekeeping operations.

One other question that might warrant further investigation is whether the findings identified in our research regarding U.N. operations also apply to other complex multilateral military interventions. More specifically, much of the logic of our theory would apply to an examination of the North Atlantic Treaty Organization (NATO), an institution that intervenes militarily, and has complex chains of delegation. Exploring whether or not our findings translate to other types of multilateral military operations can help identify the strengths and weaknesses of the causal mechanisms we discuss. If similar patterns do exist, then comparing cases across organizations can help us to better understand the sources of the problem and may help to identify potential remedies. If NATO does exhibit similar problems then some of the lessons learned from the U.N. might prove helpful in preventing these types problems in future NATO operations.

Photo: Peacekeepers of the United Nations Multidimensional Integrated Stabilization Mission in Mali (MINUSMA) conduct nightly street patrols in the town of Gao in 2017.