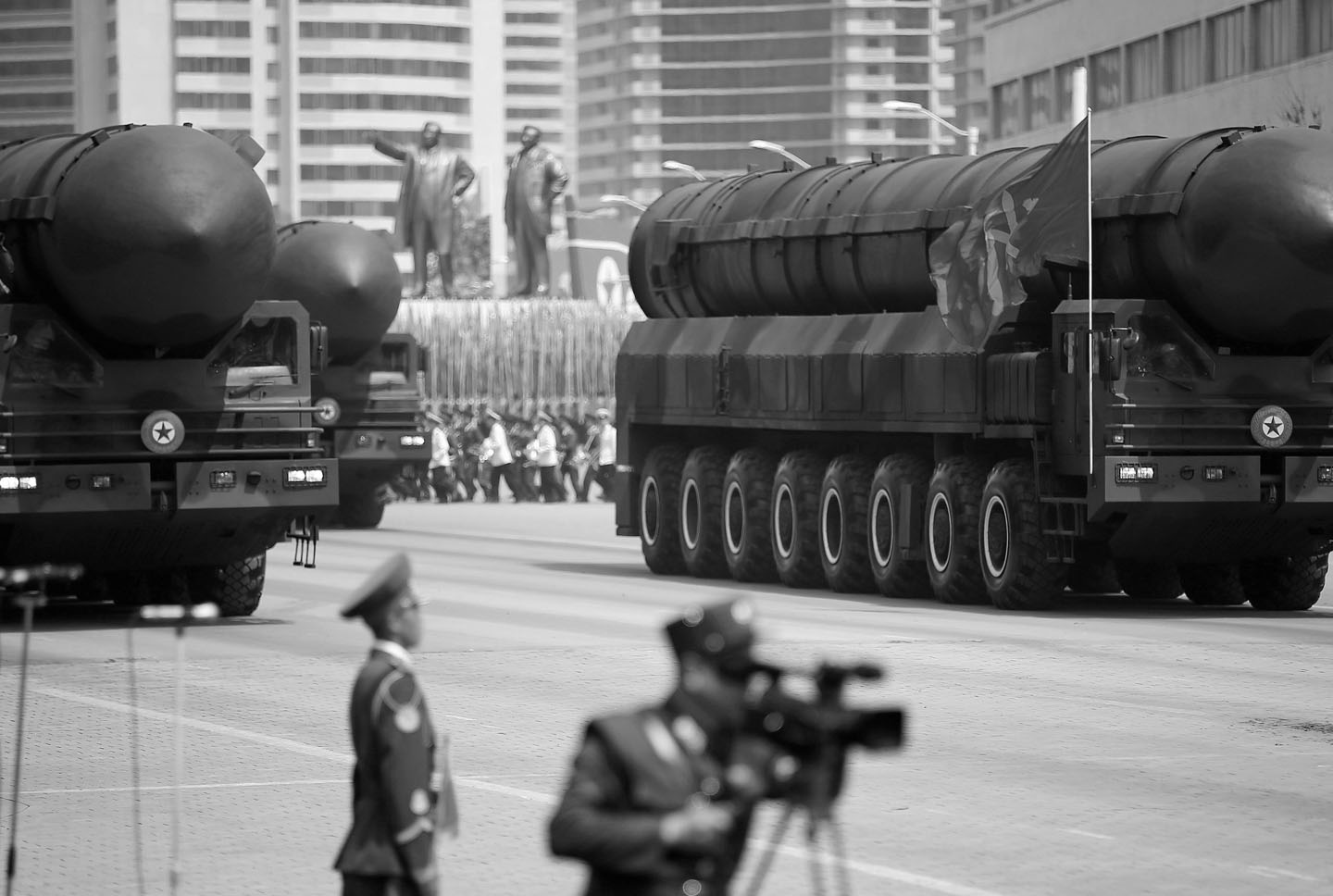 Any U.S. pursuit of victory over North Korea could spark a corrosive, lethal, escalatory dynamic with Pyongyang, one from which Washington could draw no military advantage

“The existence of ‘system’ in the world is at once obvious to every observer of nature, no matter whom….”   — Pierre Teilhard de Chardin, The Phenomenon of Man

The core nuclear crisis with North Korea is not over, despite the U.S. President’s hopeful rhetoric to the contrary. Pyongyang’s capacity to expand its nuclear weapons and ballistic missile programs remains unhindered. Indeed, with the U.S. distracted by trade tiffs with China, the DPRK has incentives and opportunities to continue to expand its nuclear arsenal. Contributing to this situation is the development of hypersonic weapons in Russia, China, and North Korea, and adversarial U.S. military relations with all three of these countries. Given these challenging and overlapping conditions, what should the President’s strategic advisors do?

In essence, what matters now is mastering a bewildering complex of struggles that pit “mind over mind,” not ad hoc contests of “mind over matter.” Winning and losing may no longer mean very much for strategic success, not just in Asia, but world-wide.

Greek historian Thucydides, in describing the Peloponnesian War wrote: “hope is…an expensive commodity, and those…risking their all on one cast find out what it means only when they are already ruined.” Is hope the U.S. administration’s core strategy for North Korea? The ancient Greeks regarded war and war-planning as daunting challenges of “mind over mind,” in which the battlefield should be carefully conceptualized before any actual troop engagements. Accordingly, any theory of victory in such engagements would follow a mind-based articulation of strategic doctrine, not just some vague emotional desire. A conventional conflict in northeast Asia could immediately heighten the prospect of a destabilizing international conflict elsewhere and/or a regional nuclear war. Among other things, hopeful but mistaken American searches for tangible forms of “victory” could substantially raise this risk, especially because the core meanings of victory and defeat have changed dramatically since famously described in Carl von Clausewitz’s classic On War.

Today, the outcome of wars between well-armed nation-states lacks clear distinctions between victory and defeat. Though counter-intuitive, even a so-called “victory” on the battlefield might not reduce developing security threats to the American homeland. Such threats, whether foreseen or unforeseen, could include sub-state aggressions such as terrorism and enemy states attacks on regional or wider U.S. allies.

Once acknowledged as a distinct foreign-policy objective, any U.S. pursuit of victory over North Korea could spark a corrosive, lethal, escalatory dynamic with Pyongyang, one from which Washington could draw no military advantage. Such self-inflicted injury could invite incremental retaliatory measures, or still worse, a sudden nuclear strike. A U.S. forfeiture of escalation dominance could invite irreversible losses, under chaotic conditions, involving tens or even hundreds of thousands of fatalities and still larger numbers of latent cancer deaths. Surely such an apocalypse could serve no one’s plausible vision of victory.

Setting aside moral considerations, the traditional criteria of war-winning applied to interstate conflicts no longer makes meaningful sense. U.S. administrations will need to offer greater specificity about their operational ends. They might determine from history that nation-states no longer formally declare wars or enter into authoritative war-termination agreements (two notable exceptions here are Israel’s still-binding peace treaties with Egypt and Jordan). And in the particularly complicated matters at hand for this president, discernible advantages may not arise from any traditional military expertise.

Logic cannot simply be cast aside. How much experience could Mr. Trump’s generals garner in starting, managing or ending a nuclear war? How much might the president and these commanders simply see what they would want to see in starting one? Here, they could recall the ancient but still relevant observation of Julius Caesar at Chapter 18 of Caesar’s Gallic War, Book III: “…men as a rule willingly believe what they wish….” But belief is not per se strategy any more than is hope. In these nuclear times, selective perceptions could sometime prove catastrophic or even fatal.

U.S. military leaders may understand no better than their antecedents the various security implications at stake, or how major, pertinent goals should best be maximized. This candid assessment by no means intends any gratuitous criticism of the generals, but is merely a dispassionate, analytic reflection on the obvious uniqueness of nuclear warfare. This sobering expectation should compel urgent attention to the myriad complexities of any impending bilateral nuclear competition. Two representative difficulties stand out: (1) substantial asymmetries in relative military power presently exist; and (2) the “weaker” (North Korean) side could nevertheless launch disastrous first-strikes or reprisals at the “stronger” (American) side. Such enemy strikes at the American side could include both the US homeland and South Korea and/or Japan.

No scientific or reliable probability estimations are ever possible for unprecedented situations, and, of course, there has never been a nuclear war. Absent informed scientific assessments of probable war outcomes in the Asian theater, President Trump should approach any such war scenarios soberly, humbly (the ancient Greek philosophers would be warning here against “hubris”), and reluctantly.

These aren’t the “good old days,” when nation-states could still wage neatly confined wars that prevented violence from directly affecting civilian populations. That early post-Westphalian mode of warfare was in many respects a historical anomaly. The broader history of conflict has been much messier, and modern warfare generally reflects a return to this messy condition. Modern adversaries need not first defeat opponent armies to inflict grievous harms on targeted states and their populations.

For President Trump and his counselors, there is some good news here as well: the United States need not win a war to suitably deter a foe – or inflict considerable retaliatory harms. This means the capacity to deter is not necessarily identical to the capacity to win. In a constantly changing security environment, war-planning and war-deterring requirements warrant careful further study, because intellectual preparation always trumps “attitude” (the current U.S. president’s self-described “ace in the hole”). In reality, superior reason wins the day, not hope or bluster.

America’s ongoing war on terror exemplifies this consequential devaluation of victory and defeat. Conflict issues must be examined within continuously transforming U.S. military plans and objectives regarding Syria, Afghanistan, Iraq, and Yemen. Changes in Israel’s nuclear strategy and that country’s expanding concern with Iranian nuclearization are likely to be augmented by a more-or-less simultaneous concern for any plausible reciprocal nuclearization by Saudi Arabia. Already, there are significant developments by Riyadh on ballistic missile capabilities: and Palestinian statehood must also be considered. America cannot win wars with Al-Qaeda, ISIS, or Hezbollah — in part because our leaders would never know for certain whether a presumptively zero-sum conflict with virulent sub-state or “hybrid” adversaries were verifiably over. In this context, a hybrid enemy refers to any foe who would combine state and sub-state elements in changing ratios and compositions.

Our president and his military advisors should look also to Eastern instruction on conflict. Ancient Chinese strategist Sun-Tzu observed: “Subjugating the enemy’s army without fighting is the true pinnacle of excellence.” To meet current U.S. national security objectives vis-à-vis North Korea and other potential nuclear adversaries, such ancient military wisdom suggests Washington emphasize deterrence over victory. At the same time, it must maintain a determined capacity to control military escalation.

Minimizing or disregarding these approaches could permit “spillover” effects of a regional conflict into neighboring states or certain other parts of the world. Once again, world politics and world military processes are always expressive of an underlying system. And this indispensable characterization must shape the core of any coherent U.S. strategic doctrine. Before systemic connections can be understood and assessed, the U.S. president must realize that the complicated logic of strategic nuclear calculations demands nuanced decision-making, a process that calls for considerable intellectual refinement. As an example, expecting to leverage Chinese and Russian sanctions against a third party on behalf of the United States, misses at least two vital, intersecting points: (1) the regime in Pyongyang will never back down on its overall plan for nuclearization, however severe such sanctions might become; and (2) counting upon meaningful sanctions from Beijing or Moscow would be problematic for President Trump, as both China and Russia remain far more worried about their traditional national enemy in Washington than about any future dangers arising from Pyongyang.

In world politics, as in law, truth is exculpatory. Like it or not, a nuclear North Korea is a fait accompli. President Trump should focus instead upon creating stable nuclear deterrence with North Korea for the obvious benefit of the United States, its vulnerable allies in South Korea and Japan, and for other vulnerable allies, including Israel. However inconspicuous, these important allies remain an integral component of the same organic world system which is subject to American influence; they cannot be gainfully isolated from the expected consequences of US geopolitical calculations.

“The existence of ‘system’ in the world is at once obvious to every observer of nature,” said the Jesuit scholar, Pierre Teilhard de Chardin, “no matter whom….” Nowhere is this interrelatedness more obvious or more consequential than in U.S. foreign policy decision-making on a nuclear North Korea. This urgent threat will not subside or disappear on its own, and it will be the U.S. president’s continuing responsibility to understand all relevant American security obligations and their ensuing complications.

In meeting this grave responsibility, it would be wise for the U.S. president to bear in mind Pericles’s warning, in his oft-quoted Funeral Speech, recalled by Thucydides: “What I fear more than the strategies of our enemies are our own mistakes.”

Mistakes can be minimized, or even avoided, according to another ancient Greek imperative, the irremediable obligation to regard war and its planning not as hope-driven adventures left mindlessly to Fate, but as complex, well-strategized matters of “mind over mind.”