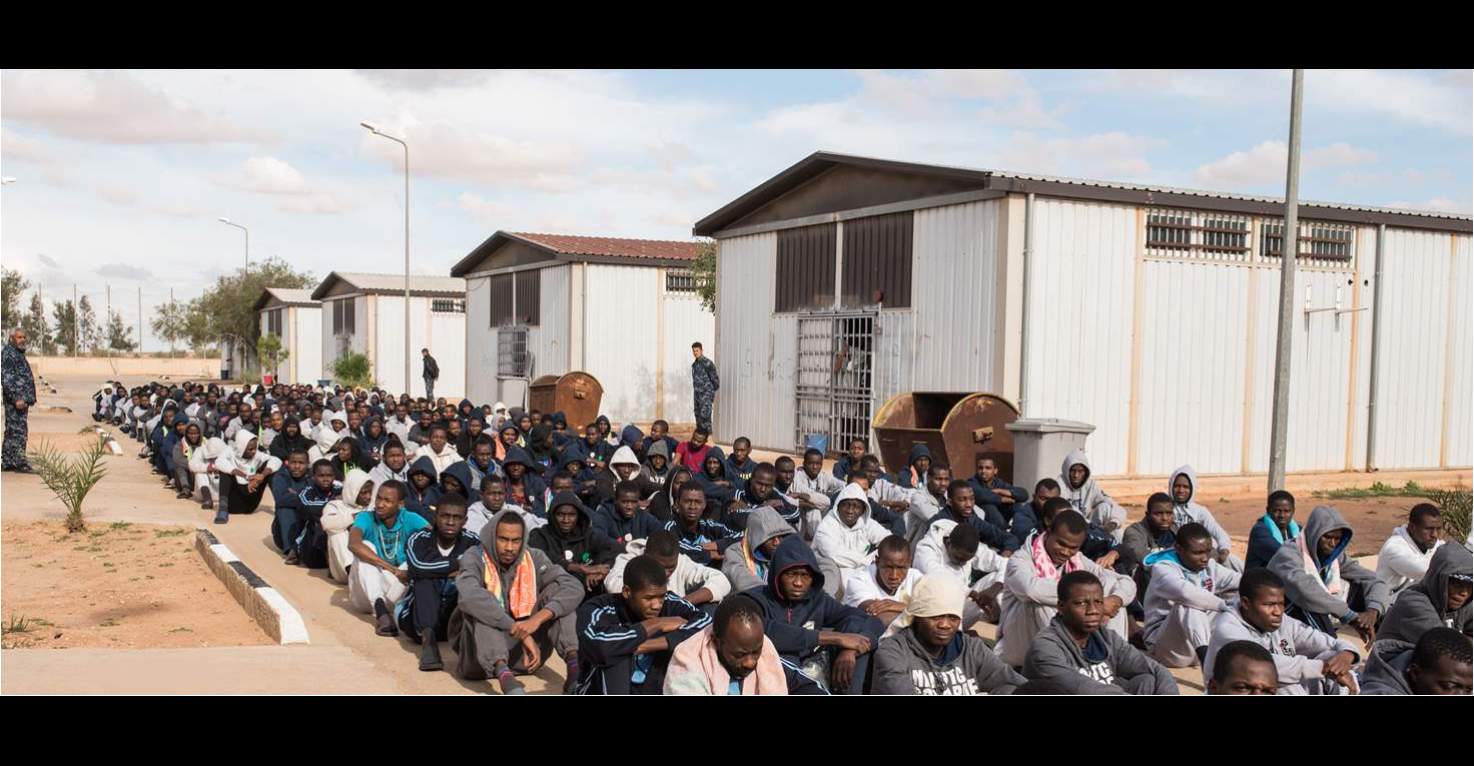 THE KREMLIN’S ABILITY TO UNLEASH MILLIONS OF MIGRANTS GIVES PUTIN STRATEGIC LEVERAGE OVER EUROPE SINCE EVEN THE THREAT TO UNLEASH MASS MIGRATION MAY DESTABILIZE ALREADY FRAGILE EU AND NATO ALLIANCES WITHOUT DIRECT CONFLICT.

Russian deployment of private military companies to support the insurgent Libya National Army (LNA) supports the Kremlin’s ambitions to gain access to critical energy supplies and seaports and establish military bases. With Russian support, the LNA also now controls roughly 75 percent of Libyan territory. This gives Russia control over potential routes for mass migration from Africa and the Middle East to Europe. The Kremlin’s ability to unleash millions of migrants gives Putin strategic leverage over Europe since even the threat to unleash mass migration may destabilize already fragile EU and NATO alliances without direct conflict.

Europe is still reeling from the 2015-2016 migration crisis during which 2.5 million refugees and asylum seekers entered the European Union, which in turn caused a great deal of tension among EU nations about how to manage and relocate masses of migrant newcomers. At the height of the crisis in 2015, European Council president Donald Tusk warned that differences about how to handle the migration crisis risked “destroying the European Union.”

Although migrant numbers have fallen since their peak in 2015-2016, the potential for large influxes of people into Europe still loom on the horizon. European measures to curtail massive migrant flows from Africa and Turkey during and since the crisis have kept a lid on mass migration so far. Whether this strategy will continue to work depends on the willingness of EU and NATO members to keep paying the bill and the continuing interest of key state and non-state partners to hold up their end of the bargain. One prime example is Italy’s engagement of Libyan militias to control migration, nominally via the LNA’s adversary—the UN-backed Government of National Accord (GNA). European funds provide incentives to restrict migrant flows or manage migrants returned from Europe or rescued at sea. But this approach assumes that flows of migrants into Europe are merely a by-product of other factors, such as conflict, bad governance, or economic disparity among regions. It does not address the possibility that Russia might exploit its increased presence in Libya and collaboration with non-state actors (militias) to establish the space and capacity to deliberately promote and facilitate large flows of migrants as weapons against Europe.

Russian interest in controlling Libyan territory and migration routes to Europe began in earnest in 2018, when Moscow—no longer interested in the previous international agreement of “a level approach” to the GNA and the insurgent LNA—openly aligned itself with the LNA under the command of Khalifa Haftar, a Libyan-American citizen and reportedly a fluent Russian speaker. As the de facto government for eastern Libya, Haftar provided territory for Russia to control the biggest illegal immigration route to Europe.

The Russian move has alarmed British and other European leaders. In London, the chairman of the House of Commons Foreign Affairs Committee, Tom Tugendhat, said, “It’s is extremely alarming Russia wants to open up a new front against the West in Libya, but it should also come as no surprise…they will without a doubt try to exploit migration routes across Africa.” Last year, the Polish think tank Warsaw Institute described the potential Russian advantage this way:

The Kremlin could direct a massive wave of refugees to destabilize Europe. Under a ‘mild’ scenario, Russia…will be given another advantage in political negotiations with EU Mediterranean members, as the latter is holding interest in stabilizing the situation in Libya to stop a mass influx of refugees…Moscow’s stronghold in Libya may fulfill a top function in its European disintegration and destabilization policy.

Mohammed Eljareh of the consulting firm Libya Outlook offered a similar assessment, “Putin would like nothing more than to keep Europe busy and divided over Libya, scared of illegal immigration, paralyzed by right-wing populism that threatens the very idea of the EU.”

Recent events have solidified Russia’s place in Libya and augmented the Kremlin’s ability to use migrants as a weapon against Europe. Approximately 1,500 Russian mercenaries associated with the Wagner Group recently entered Libya to bolster Haftar’s stalled efforts to take Tripoli. In addition to gaining more of a foothold in Libyan territory and solidifying Moscow’s alliance with the LNA, analysts agree the action signals an intention to “intervene in the conflict at least in part to control refugee flows into Europe, indicating a broad understanding of the disruptive power that the movement of immigrants has had on the Western world.” Just as important is Russia’s direct engagement with tribes in southern Libya. Although these contacts with Libyan tribes were used to control migration, they can also be used in the future to enable migration flows into and through the country.

The irony is that even if some peace accord takes hold in Libya, it may not solve a pending migration flow to Europe.

In 2016, for example, NATO member Turkey threatened to flood Europe—already struggling with mass arrivals from Turkey in Greece-—with millions of Syrian refugees if certain demands were not met. The EU did not have much choice and in “an atmosphere of palpable panic,” Turkey was promised 6 billion Euros to fund resettlement of Syrian refugees, liberalization of EU visas for Turkish nationals, and an acceleration of talks about Turkish membership in the EU. The approach was so successful that Turkey made another threat to flood Europe with refugees again in 2019. Any European sanction or condemnation of Turkey for its military intervention in northeast Syria, warned Turkish President Erdogan, would mean “opening the gates and send 3.6 million refugees your way.” The threat was taken seriously in Europe with Greece warning Turkey could send 500,000 refugees “immediately.” Sending 10,000 refugees per day to Greece from the Turkish seaport Izmir “would be easy,” according to one local police official. And this was a threat from a NATO member state, not an enemy of the alliance.

Threats to unleash massive migration from Libya to Europe were issued several times by Muammar Gadhafi. In the 2000s, he threatened to “turn Europe black,” as scholar Kelly Greenhill notes, if the EU failed to meet his demands.

Putin well understands European panic about the threat of mass migration is the product of the continent’s previous migration crises, which he gleefully notes are partly the result of the West’s own actions. In an interview with the Russian News Agency TASS, Putin described post-Gaddafi Libya: “There is still chaos and confusion; a flow of migrants went through Libya to Europe. Gaddafi had always warned about that, he said that he stopped African migrants from going to Europe. As soon as this ‘wall’ was gone, they started pouring into Europe. And now they have what they were warned about.”

The irony is that even if some peace accord takes hold in Libya, it may not solve a pending migration flow to Europe. There was an assumption underlying the recent Berlin conference, for example, that the end of the chaos in Libya would be a critical achievement for European governments grappling with anti-immigrant sentiment. However, it is probably too late to counter Russian capacity to control or unleash migrant flows. Moscow or its proxies established a position in large swaths of Libyan territory. Russia has also established military ties with Libya’s southern neighbor states in the Sahara and Sahel to address the “multiple challenges posed by the surge in terrorism and religious extremism.” A Russian national currently serves as security advisor to the president of the Central African Republic and hundreds of Russian mercenaries are active in that nation.

Russian ties with Africa nation states is an important part of Moscow’s strategy to establish itself along NATO’s southern flank just as withdrawals of US troops from the region are under review. Perhaps even more importantly, Russia has developed strong ties with friendly tribes and militias in Libya. Large tribes control vast territories in the region, operate beyond the control of nation states and ignore borders. Just as Italy pays militias to curtail migration from western Libya, Russia can pay tribes and militias to just as easily encourage and facilitate migration as control it. Behind the dam they control are millions of potential migrants from Africa and the Middle East, including Africa’s rapidly growing and younger population of which significant proportions will never access education or formal sector employment. For many, migration to Europe is already seen as their only viable solution despite the risks and expense.

In 2016, the NATO Supreme Commander General Philip Breedlove observed Russia and Syria were using mass migration as a “non-military means to create divisions in the NATO alliance and Europe” and “destabilize and undermine the continent.” As Russia controls the tap to mass migration via Libya, we may see that merely the threat of mass migration will make General Breedlove’s observations applicable once again.

Photo Description: Refugees and migrants in Libya trapped in a detention center in Qasr bin Ghasher in close proximity to intense armed clashes in Tripoli