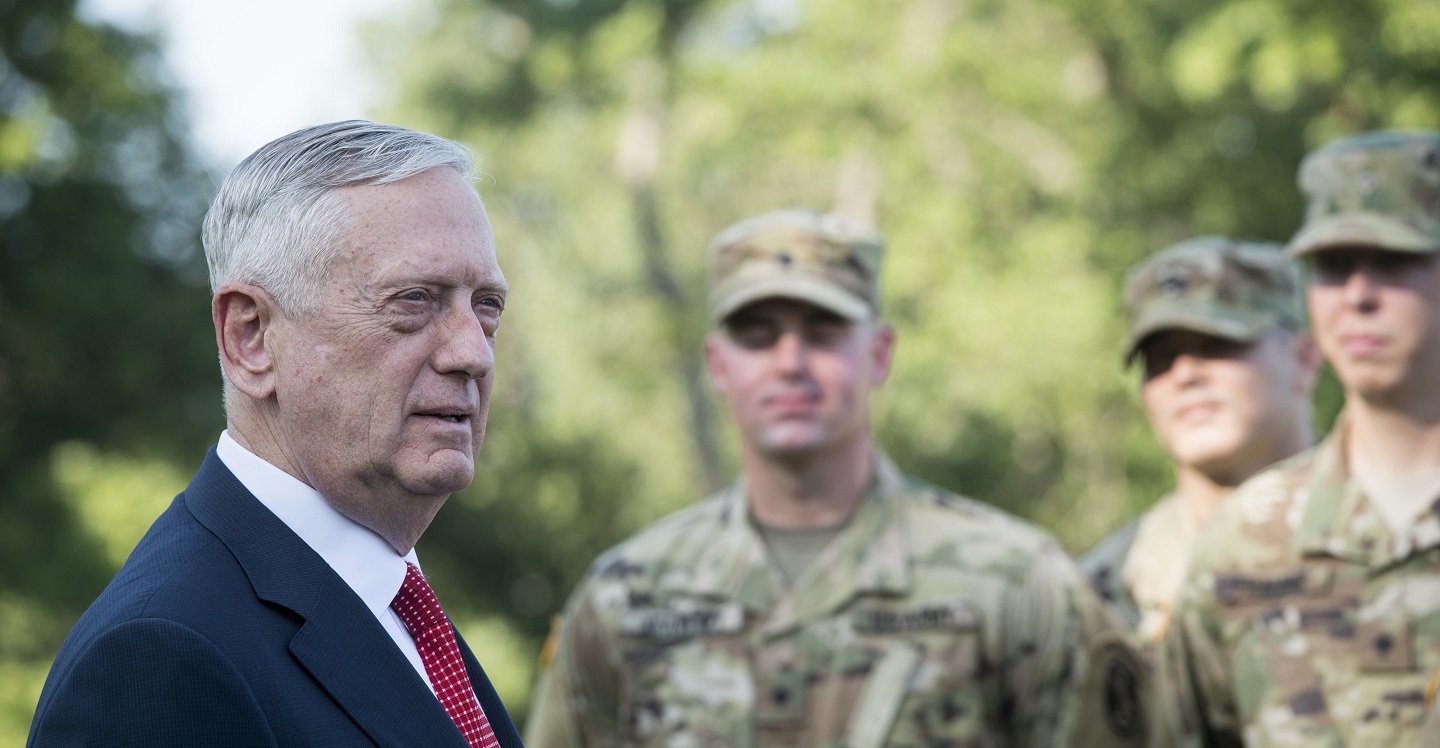 But what might the process of civilianizing mean, and what are the results? What is being gained, and what is being lost? What, in short, distinguishes the civilian from the military?

Currently, U.S. law requires that a former military officer must be retired from active duty for a minimum of seven years before she or he may become Secretary of Defense. The role was designated by the National Security Act of 1947 as a key part of civilian control of the military. Hence, there must be something about “civilianizing” that takes at least seven years before it is appropriate for a person with a career background in military service to take on the role of second in the civilian chain of command over the armed forces. But what might the process of civilianizing mean, and what are the results? What is being gained, and what is being lost? What, in short, distinguishes the civilian from the military?

In our national conversation about civil-military relations the term “civilian” is, as the academics would say, “underspecified.” Samuel Huntington observed in The Soldier and the State that although the bounds of the military identity are well defined, to be a civilian simply means than one is not a member of the military. Although we have a strong sense of civilians’ rank and role vis-à-vis the military in a democracy (civilians, as a group, control the military and therefore “outrank” them in an institutional sense), civilians do not comprise a profession in the way the military does, and therefore do not carry with them certain standards of conduct and expertise. Civilians are so diverse in their backgrounds, views, and responsibilities—and so numerous in comparison to the small number of those who serve in the military—that lumping them together for analytical purposes is only useful as a contrast to service in uniform.

But what makes a “civilian” in the civil-military enterprise is as important today as it has ever been, because the value of civilian control of the military is increasingly in question. Not only does the American public rate its confidence in the military higher than for any civilian arm of government, but military officers themselves increasingly wonder aloud about what Peter Feaver calls “McMasterism”— the notion that senior military leaders have the right and the responsibility to oppose civilian policy guidance they find unwise in their own professional judgment.

The current phenomena of public trust in the military and military distrust of civilian leaders are nowhere more evident than the debates that still rage over the identity and status of James Mattis, President Trump’s first Secretary of Defense and a retired four-star Marine Corps general. From the tendency of people to refer to him as “General” instead of “Secretary” to his insistence that he is following professional military etiquette in not commenting on Trump administration policies, his case begs a series of questions: Is a formal and legalistic break from the responsibilities of military service sufficient to make one a civilian? Or is there more to being a civilian than simply not being in the military? Are there skills, values, habits, or abilities implicated by a civilian identity? Is being a civilian a legal, professional, or cultural designation? In the defense context, does one become a civilian according to certain standards of experience and expertise?

These are important questions to answer if we want to evaluate the democratic balance of power between the civilian institutions of government and the armed forces. We also need to know whether there is something about senior civilians’ backgrounds or abilities that confers on them not just the constitutional right but also the capacity to control the professional activities of their uniformed colleagues.

First, it is important to distinguish between types of civilians—and, relatedly, between levels of analysis. The “civilian” in civil-military relations at the policymaking level connotes particular individuals occupying specified roles in the administration and guidance of, and the budgeting for, the military services and the defense enterprise. These roles appear formally in Title 10 of the U.S. Code, but also in civilian institutions, most notably the National Security Council, the Office of the Secretary of Defense, and the Congress with its relevant committees. Such civilians are not simply those who are not members of the armed services; they have roles and responsibilities that involve them in the civil-military relations of policymaking.

Indeed, political experience is as close to a standard for higher office as there is.

Moreover, the civilians who are qualified to play a role in defense policy are a subset of the overall civilian population. While being a non-military, politically appointed government leader with (at least partial) responsibility for managing military matters may not make one part of a formalized profession, it is ideally associated with experience and expertise in both defense issues and domestic politics. There are discernable patterns in achievement and experience among those historically appointed not only to the cabinet, deputy, and undersecretary ranks at the Department of Defense, but also the National Security Advisor, White House Chief of Staff, and the members of House and Senate armed services committees. These men and women tend to hail from legal, business, or political backgrounds. Indeed, political experience is as close to a standard for higher office as there is. Leon Panetta, who served as Secretary of Defense, was professionally steeped in politics and the machinations of Washington bureaucracies from the beginning of his career. A political science major and a lawyer, he worked as a junior appointee in the Nixon administration and went on to be a Congressman and then Director of the Office of Management and Budget for President Clinton. The first White House Chief of Staff was an academic before joining the U.S. Conciliation Service, and later the Labor Department. Others were career political campaign staffers, like Kenneth O’Donnell, or businessmen, like H.R. Haldeman. Many of these men had military careers prior to their political lives, but on average their service was brief and their experience in law, business, academia, and especially politics was much deeper.

It is true that the range of backgrounds considered good preparation for these jobs is broader than the experience garnered by military service; but that is part of the value that civilians bring to their roles in defense and national security policymaking. Careers that prepare one for public office tend to fall under the categories of social science, law, and management. These are people who spend their lifetimes being educated in and practicing how societies and public institutions should be organized and resourced. They know about balancing extremely diverse interests, public relations, and personal relationships. They know about power not just in a material sense, but also in a social one.

Civilians inhabit the world of professional politics. And politics, as Clausewitz told us, provides the purposes for military action. In a democracy, the distinction between politically active civilians and apolitical administrative functions is by design. For no arm of the executive branch in the United States is this division between politics and administration more important than for the military. That is the reason a fundamental professional standard for the American armed forces is to be non-partisan, neutral to the political interests of those in the National Command Authority, the Congress, and society as a whole. Civilians in positions of political power are not only free to adjudicate among factional domestic agendas, they are responsible for doing so in order to channel political will into military policy. Should they fail to do so, the consequences are their responsibility, not the professional military’s.

Politics therefore comprises a civilian’s core knowledge base and skill set and separates civilian from military expertise. To argue that management of a hierarchical bureaucracy regulated by the Uniform Code of Military Justice scales up to political roles is to elide the differences between military technocratic administration and political leadership. A good politician may also be a good technocrat, but excellence in managing a bureaucracy does not automatically lend itself to excellence as a politician, for the bureaucrat defends a narrow set of expertise and interests, while the politician knows how to create equilibrium among many such priorities.

Operating politically is also not a career that allows for shortcuts to achieve true expertise. Although the barriers to entry in political roles can be less systematic than those imposed on military officers, many the most effective senior politicians earned their seniority by living through countless hours of budget negotiations, personnel decisions, political campaigns, constituent services and meetings, debates, speeches, testimony, fundraising, balancing favors and interests, giving media interviews, and the sundry other necessities of survival in the political arena. Political appointees coming from a technocratic background, such as the current Secretary of Defense, may have climbed the rungs of bureaucracies and corporations. Much like the military officer, a senior political official has seen the full spectrum encompassed by her profession; she has succeeded and failed and learned a great a deal from the fight. In short, the civilian cannot transform into a competent military officer overnight, but the military officer similarly cannot transmogrify into a politician mere months after retirement.

A century ago, sociologist and economist Max Weber wrote that politics is a vocation. Being a civilian in the civil-military relationship connotes not only the principle of civilian control, but also expertise that complements and guides that provided by professional military advice. The “civilian” in the policy-relevant civil-military relationship is therefore neither a mere functionary nor a neophyte whose judgment needs to be affirmed by a sort of military peer review. The civilian represents the expertise of another professional group—more diffuse, perhaps, and less systematically commissioned, but real and not only relevant to the legitimate policymaking process but essential to it.  Civilians across the defense, diplomatic, intelligence, and legislative enterprises may not comprise a single profession like military officership. But the experience, skills, knowledge, and vision that civilians bring to their politically enabled roles in the civil-military relationship provide the military profession the context in which it is called to serve.