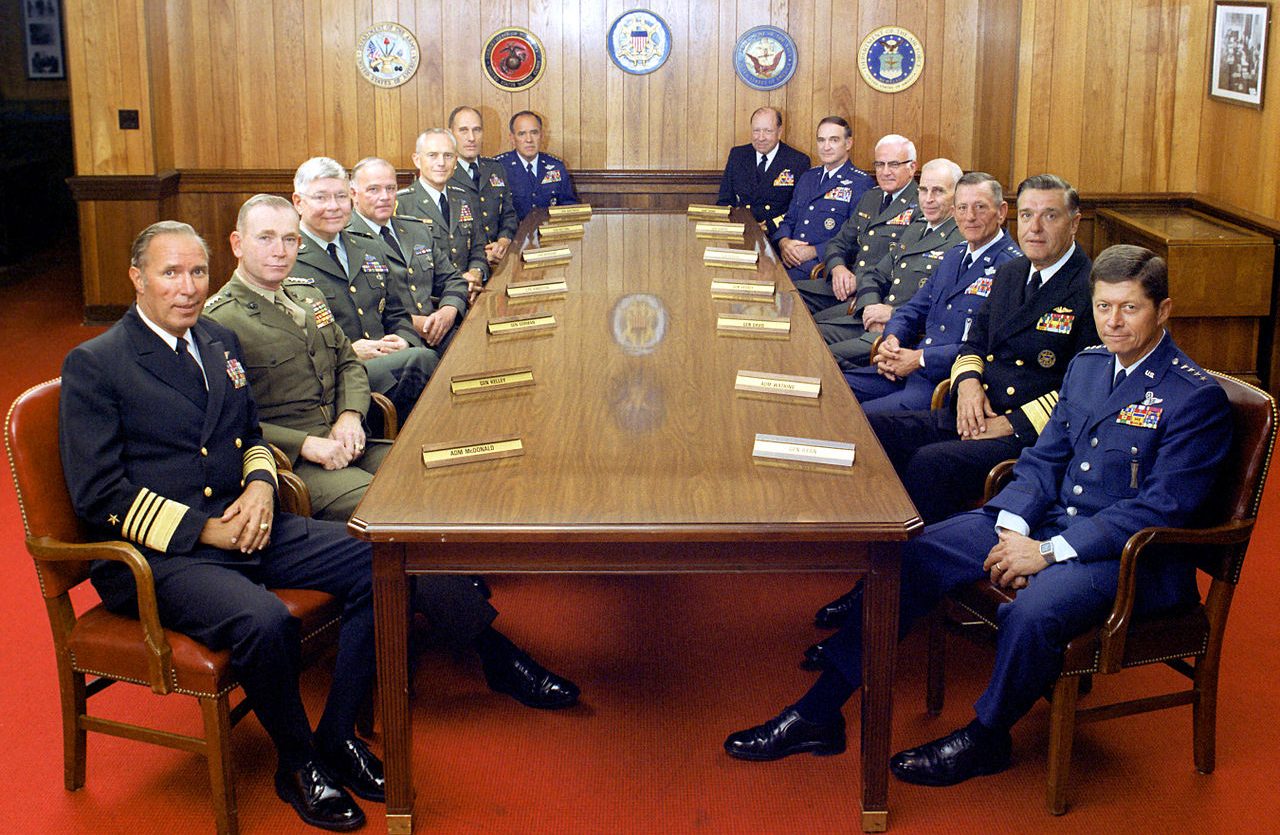 How do action officers (or anyone below the executive level) get their principal’s priorities on a final list of recommendations for the Secretary of Defense’s approval? Faithfully, even forcefully, presenting the message is not enough.

You can learn a lot about an institution by listening to its arguments. Not so long ago, a disagreement in the Pentagon ended something like this:

“We have to do this my way,” a combatant commander’s action officer said. “This is what my four-star wants as the supported commander.”

“That’s interesting,” a Joint Staff representative replied. “But everybody here works for a four-star.”

The matter was not decided in the combatant command’s favor.

This vignette might be taken as evidence of bureaucratic obstinacy. The combatant command’s request appears to have been dismissed out of hand. However, one might also say this argument is an example of strategic integration. When two dozen organizations have roughly equal authority and two dozen action officers have their own wish list of requests, the Joint Staff has no choice but to decide how much of each command’s list can be supported in concert with all the other lists without completely neglecting an entire command or overwhelming joint capability and capacity.

In situations like this, which are very common in the Pentagon, how do action officers (or anyone below the executive level) get their principal’s priorities on a final list of recommendations for the Secretary of Defense’s approval? Faithfully, even forcefully, presenting the message is not enough. There are six things you can do to increase the chances that your command’s interests are reflected in the outcome of discussions in Pentagon.

1. Accept that no choice is binary.

There are always more than two options. Through decades of schooling and sports, many of us learn to think of all choices as a matter of right versus wrong. We mistakenly believe there is a rationally optimal choice, which anyone, anywhere would accept as long as they apply sound reasoning. The Pentagon disabuses workers of this fallacy in short order. The fact is, no choice is binary in the Pentagon.

Every position that must be taken, option that must be exercised, or policy that must be developed falls somewhere on a vast spectrum of choices between “do absolutely nothing” and “throw out the system, start over.” Too often, well-meaning workers present their leaders with a “this-or-nothing” decision brief, as if to say that the leader must only choose whether to accept or reject the work exactly as written.

Wise Pentagon workers know there are as many nuanced positions and policy options as there are stakeholders in a conversation. To win an argument, the first step is to recognize that everyone’s proposed position is both valid and fluid. If rationality should be involved, we must rationally acknowledge that no stakeholder’s position is inherently more or less valuable than other stakeholders’ positions. Accept that no choice is binary, and you will start to see that winning an argument is about trading ancillary aspects of your position to others so that every stakeholder gets as much of their core position or policy adopted as possible.

Executives care about the destination, not about road-building and lane-striping. Even the most Byzantine processes are determined by executive decisions. At the leadership level, the details of how a decision is carried into effect matter much less than the results and implications. The best executives speak in a common language that spans organizational cultures and rests on the concepts of cost, benefit, end state, and risk. More on that later.

Abandon forever the habit of describing a policy option in terms of the process needed to achieve it. Instead, elevate your thinking and your talking points beyond the technical or bureaucratic. Executives, even from other organizations, have great faith in your ability to carry out their decisions. They trust that you will take the steps required, even if you are not sure what they are yet. And — just to be clear — a recitation of the required steps is not necessary. So, save yourself from patronizing politeness by pulling your argument out of the wire diagrams and routing slips. Come to the discussion ready to explain what your proposal achieves and more audiences will relate to it. The more people think your position is relevant, the more likely you are to influence the discussion.

3. Never stake a position on less than six stars.

Title 10, United States Code, section 526, limits the number of general and flag officers on active duty in the Department of Defense. If you have never read this rather obscure federal law, you would be forgiven for thinking the number is small. It is not. The statutory limit is 963 general and flag officers across the Department of Defense, plus many exceptions that do not count towards the limit.

Those thousand general and flag officers are encouraging, guiding, and directing their action officers every day in the hopes of affecting change in their commands’ interests. When virtually every organization that participates in any discussion can produce a general or flag officer memo with ease, the memos lose their clout. That matters because it means no one organization has a voice powerful enough to win an argument in the Pentagon on its own.

At the Pentagon, the same staffers who show mild interest in a single organization’s position will pay immediate attention when a position is presented with the overt support of two or more high-ranking generals. Although this is admittedly a rule a thumb based on anecdotal information, “six stars” is a good reference point.

In the Pentagon, six stars behind a position is likely to get instant attention. This is equally true when three Directors (major generals) address their Vice Chief of Staff (a general), or when the Vice Chiefs of Staff of two services (both four-star officers) send a memo to an Undersecretary. Schedules are rearranged swiftly, no-notice meetings are called, and recommendations are given careful consideration. Where to find the six-plus stars you need depends on the argument you are trying to win.

You should always seek to build a coalition that spans as much of the breadth of a forum’s membership as you can manage. Joint discussions demand joint coalitions. For example, if all of the uniformed services are invited to a round-table, and the Army wants to win the argument, then the Army’s representatives will have a much higher chance of carrying their point if they spent the time ahead of the forum to get the Navy, Air Force, and Marine Corps’ representatives on board.

Arguments within a single organization require coalitions across staff sections. Sometimes the composition of a would-be coalition is obvious. Other times, it is not. Consider budgeteers, strategists, acquisition professionals, policymakers, as well as human capital managers, force designers, and supply chain managers. The permutations are extensive, but always remember that the broadest possible coalition willing to speak with a shared voice, has the best chance of carrying the day.

Granted, forging many stakeholders into a cooperative body can sometimes require moderating the finer points of various positions. Fortunately, the act of coalition building will force you to decide which aspects of your desired outcome are essential, and which can be adjusted, traded, or dropped for the sake of shared buy-in. Some may say this is losing, but you will know better. This is winning as much as you can, when you can, with friends.

5. Stick to a common language: costs, benefits, ends, and risks.

Voltaire wrote, “Define your terms, you will permit me again to say, or we shall never understand one another.” Differing definitions of any term can cause organizations to talk past each other. Removing jargon from your communications not only helps to avoid confusion, it also focuses your words more clearly on the essence of a problem, such as making the right trade-offs across disparate activities.

All governmental activities incur costs to deliver benefits toward a desired end state, but do so while imposing some risk to other activities that could have used the same resources in a different way. Jargon can be fatal to achieving the essential understanding of these trade-offs. Ruthlessly criticize your own communications. Stick with broadly applicable terms which have generally accepted definitions. As mentioned earlier, executives often speak in a common language that rests on the concepts of cost, benefit, end state, and risk.

redefine what it means to “win.” Winning is not about crashing through every barrier and reaching the top of everyone’s priority list. Rather, winning means achieving productive, positive change, adequately resourced and properly administered.

Whether you want to launch a satellite, patrol the ocean, guard Americans overseas, or train an ally, every one of these activities can be described in terms of the foundational understanding of benefits and costs. By using a common language, you will avoid explaining your position as if you are addressing a hall full of mid-level managers from your own organization. Rather, you will create shared understanding across many stakeholders. This allows influential people who may know nothing about the details of your work to feel comfortable putting your position into the context of all the other positions competing for the same resources.

You cannot build a coalition outside your own office unless people with significantly different points of view feel like they have a good idea what you are talking about. Stick with a common language to achieve that.

Finally, if you want to win an argument at the Pentagon, redefine what it means to “win.” Winning is not about crashing through every barrier and reaching the top of everyone’s priority list. Rather, winning means achieving productive, positive change, adequately resourced and properly administered.

Embrace compromise and the moderated goals that go along with it. the Pentagon is the place where the interests of many organizations are merged into a single, $600 billion annual budget with clear priorities. Priorities wax and wane. White House interest is piqued and sated. The winds and tides are good metaphors for the swirl of competing interests, ideas, and priorities that exist at any given time in the Department of Defense.

If you are serious about achieving something great at the highest levels of American national security policy, cast off the simplistic idea of zero-sum arguments. Seek instead to build a broad coalition remembering that every organization has interests, which often overlap. Use common language to avoid minutia while focusing on important, cross-organizational questions. Compromise to let many stakeholders gain 80 percent of something rather than 100 percent of nothing. That is how you win an argument in the Pentagon.

Theodore Zagraniski is a Major in the United States Army. The views expressed in this article are the author’s, and do not necessarily reflect those of the U.S. Army, the Department of Defense, or the U.S. Government.