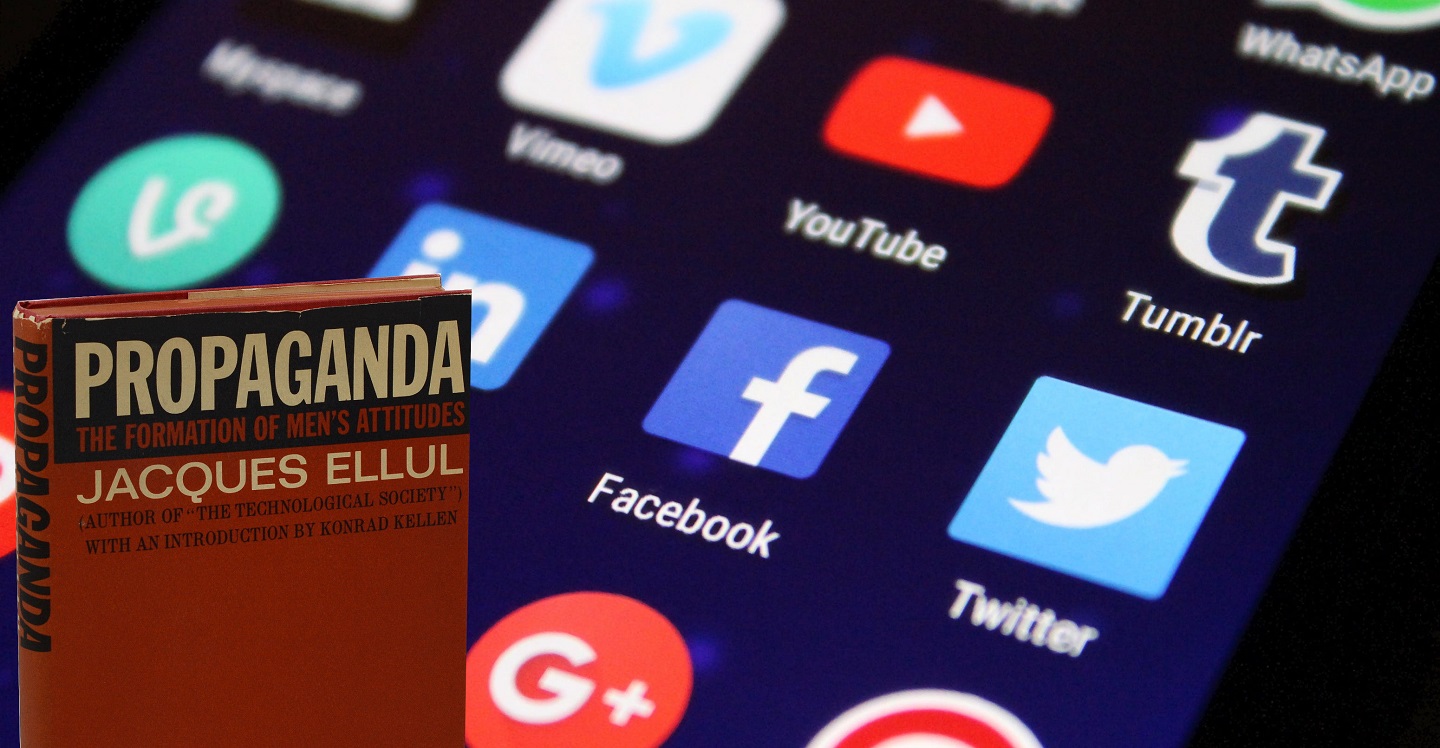 Western nations have again become concerned about propaganda and disinformation due to the actions of the Chinese and Russian governments.

An overlooked classic of information warfare/operations, disinformation, and fake news is Jacques Ellul’s Propaganda: The Formation of Men’s Attitudes (1965). Jacques Ellul was a French sociologist and philosopher who served as professor at the University of Bordeaux. Author of over 50 books and more than 1,000 articles, he was a renowned expert on propaganda and the effects of technology on society. His views now seem prescient in light of computational propaganda.

Ellul describes what we now call the information element of national power in stark terms. Western nations have again become concerned about propaganda and disinformation due to the actions of the Chinese and Russian governments. We have a responsibility to grasp how disinformation targeting the populace can challenge defense. Ellul speaks to those concerns.

Addressing targeting the populace, decades before big data and micro-targeting, Ellul wrote that in propaganda “…the individual never is considered as an individual, but always in terms of what he has in common with others, such as his motivations, his feelings, or his myths. He is reduced to an average; and, except for a small percentage, action based on averages will be effectual.” (p. 7)  This explanation appears timeless. However, technology now allows us ever-greater market segmentation, and therefore ever-smaller groups can be targeted with disinformation based on their shared views. Mass movements arise from the connection of motivated people with like-minded others. Strengthening those connections and making the connected group even more like-minded can be accomplished through amplifying information that reinforces common views and minimizing exposure to information that effectively challenges shared views. Amplifying supportive voices while minimizing opposing ones occurs in what we now call “filter bubbles.”

Regarding “filter bubbles,” Ellul wrote “Propaganda tends to make the individual live in a separate world; he must not have outside points of reference.” (p. 17). Ellul went on to say and modern research supports) that “Those who read the press of their group and listen to the radio of their group are constantly reinforced in their allegiance.”(p. 213) Social and traditional media information outlets on radio, television, and the internet allow us to self-select what information we even see, much less accept. To avoid the cognitive dissonance of contrary opinions, we can deny ourselves outside points of reference, and thereby reinforce our own allegiances.

Ellul recognized that these filter bubbles make us vulnerable to adversary propaganda by promoting our efforts, as unwitting consumers of propaganda, to seek information that keeps us interested, and agrees with our preconceived notions. He observed that “What is needed (for propaganda), then, is continuous agitation produced artificially even when nothing in the events of the day justifies or arouses excitement.” (p. 20) He added that, from an enemy’s perspective, “For propaganda to succeed, it must correspond to a need for propaganda on the individual’s part…. There is not just a wicked propagandist at work who sets up means to ensnare the innocent citizen. Rather, there is a citizen who craves propaganda from the bottom of his being and a propagandist who responds to this craving.”(p. 121) In other words, we choose our own disinformation; it is not forced upon us. For westerners, Ellul implies that in our freedom-loving society, free speech is important, but we must also do more than support free choice in the information we consume. We must also collectively implement common-sense guardrails, such as critical thinking and media and information literacy, to avoid being ensnared by our own desires. Filtered information confirms our views and approves of our perspective, hardening our opinions into polarization.

Speaking to such polarization, and the outrage culture, Ellul wrote: “He who acts in obedience to propaganda can never go back. He is now obliged to believe in that propaganda because of his past action.”(p. 29) Ellul explains that we take actions, then justify them as moral after the fact. Self-justification then shapes our future views of moral actions we might later take. Those are not limited to physical actions, but can be statements. Ellul notes that “The majority prefers expressing stupidities to not expressing any opinion: this gives them the feeling of participation…. The more complex, general, and accelerated political and economic phenomena become, the more do individuals feel concerned, the more do they want to be involved.”(p. 140) For our fast-paced, complex society, that highlights the urge to display opinions and defend the morality of those opinions. (For more on this subject, see Haidt’s The Righteous Mind.)

…. From that moment on, everything that expresses this particular way of life, that reinforces or improves it, is good; everything that tends to disturb, criticize, or destroy it is bad.

Ellul addresses this process, saying “What starts out as a simple situation gradually turns into a definite ideology, because the way of life in which man thinks he is so indisputably well off becomes a criterion of value for him…. From that moment on, everything that expresses this particular way of life, that reinforces or improves it, is good; everything that tends to disturb, criticize, or destroy it is bad.” (p. 67) Ellul continues by saying “words such as Democracy, Country, and Social Justice can now set off the desired reflexes. They have been reduced to stimuli capable of obtaining reflexes in public opinion which can turn from adoration to hatred without transition.” Finally Ellul concludes that “the propagandee and non-propagandee cannot discuss: no psychologically acceptable communication or exchange is possible between them.”(p. 203) The propagandist instigates action. The actor justifies the action as moral, creating a vicious cycle. Actions and justifications cohere into an ideology, then a value system. The value system calcifies into a rejection of all other ideological perspectives. When looking at the breakdown of a group, ranging from high school rivalries to civil wars, this model offers insight and points to a compelling need for critical thinking.

Finally, speaking to the necessity of critical thinking to counter the influence of disinformation, Ellul wrote: “The most generally held concept of propaganda is that it is a series of …lies, and that lies are necessary for effective propaganda….This concept leads to two attitudes among the public. The first is: ‘Of course we shall not be victims of propaganda because we are capable of distinguishing truth from falsehood.’ Anyone holding that conviction is extremely susceptible to propaganda…. The second attitude is: ‘We believe nothing that the enemy says because everything he says is necessarily untrue. But if the enemy can demonstrate that he has told the truth, a sudden turn in his favor will result.”(p. 52) The Dunning Kruger Effect (in which someone thinks their cognitive ability greater than it is because of a lack of understanding about the subject) seems to apply well to disinformation.

Ellul further explains why well-crafted propaganda is so hard to debunk using facts alone: “If one falsifies a fact, one may be confronted with unquestionable proof to the contrary…. But no proof can be furnished where motivations or intentions are concerned or interpretation of a fact is involved….(T)he propagandist must insist on the purity of his own intentions and, at the same time, hurl accusations at his enemy…. The mechanism used here is to slip from the facts, which would demand factual judgment, to moral terrain and to ethical judgment….(The propagandist) must keep the public from understanding reality, while giving the public the opposite impression, that it understand everything clearly.” (pp. 57-59) Ellul highlights the classic aphorism in politics that “if you’re explaining, you’re losing.” We tend to see simple messages as truthful (see also Kahneman’s Thinking Fast and Slow), which Ellul presents this way: “Problems are made simple. Goebbels wrote: ‘By simplifying the thoughts of the masses and reducing them to primitive patterns, propaganda was able to present the complex process of political and economic life in the simplest terms…. We have taken matters previously available only to experts and a small number of specialists, and have carried them into the street and hammered them into the brain of the little man.” (p. 206)

So, how do we overcome the challenge of disinformation? Do we open the arena of ideas and let the various assertions fight it out, trusting that the best ideas will win? Ellul speaks to that, as well: “(T)wo propagandas, far from canceling each other out because they are contradictory, have a cumulative effect. A boxer, groggy from a left hook, does not return to normal when hit by a right hook; he becomes groggier.” (p. 181) Why force average citizens to sort through disinformation devised by trained, experienced professionals? Would we ask an average group of sports fans to play against a professional team? Or would we consider other options, such as offering training, limiting the tactics that the professionals could legally use, or any number of other possibilities? Neither Ellul nor I am advocating for any specific outcome- only highlighting the challenge if nothing is done.

Taken together, Ellul lays out the dangers of propaganda, and thereby highlights what modern people might do to protect ourselves from it. Ellul’s book speaks to many issues facing the world today, which may not be traditional defense concerns, but which frame the goals within which we develop strategies and doctrines. Since we are affected, we would be wise to understand disinformation’s effects- as well as to prepare to defend against them if we are called to do so. Ellul’s work can help us both accept and address that responsibility.

Jon Herrmann (Lt Col, USAF, Ret.) is a career information operations professional with over 25 years’ experience in defense information and strategy. He currently serves as a consultant and contracted expert faculty on analytic tradecraft, complexity theory, and cognition for the Department of Defense. The views expressed in this article are those of the author and do not necessarily reflect those of the U.S. Army War College, the U.S. Army, or the Department of Defense.