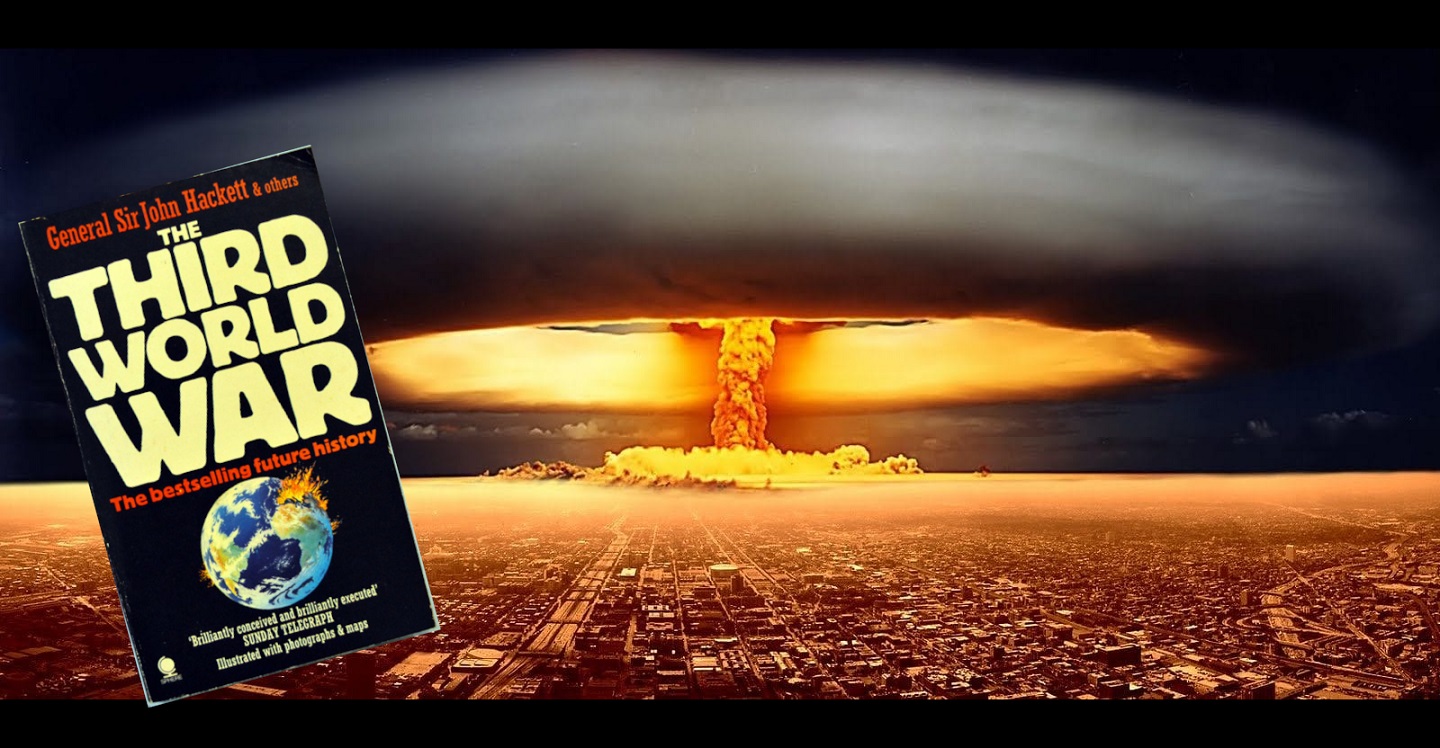 Today, as the United States once more finds itself in a situation of near-peer competition with China and Russia, this four-decade old novel seems relevant once again.

Sir John Hackett’s 1978 novel The Third World War was one of the best-selling books of the decade. The retired British General’s fiction debut sold three million copies and was translated into ten languages. At least two American Presidents read it, and Ronald Reagan talked about how much influence it had on his thinking. Hackett’s novel helped to shape the wildly popular genre of the techno-thriller in the 1980s and beyond. Why, then, has this volume faded into obscurity? I explored this question in a recent article in the Journal of Military History. In this essay, I want to encourage readers to give Hackett another look. Today, as the United States once more finds itself in a situation of near-peer competition with China and Russia, this four-decade old novel seems relevant once again.

Hackett’s plot is straightforward. It is 1985. Years of rising tension between NATO and the Warsaw Pact have led a new generation of western leaders to re-arm and prepare for conflict. A weak and unstable Soviet leadership, fearing the collapse of its influence in Eastern Europe, embarks on a strategy of destabilization and confrontation around the world. NATO intervenes in a crisis in Yugoslavia, where American and Soviet forces clash. The world descends into war.

While there is fighting in the Middle East, Africa, and elsewhere, the central front is in Germany. The novel opens with the American 11th Armored Cavalry Regiment on the flank of the Fulda Gap, suddenly facing an onrushing column of Soviet T-72s. Initially, the Warsaw Pact makes impressive gains, but the offensive slows as NATO firepower takes its toll. Facing the failure of its gamble, the Soviets launch a nuclear-tipped SS-17 rocket that destroys the English Midlands city of Birmingham. In retaliation, NATO sends a warhead of its own that levels Minsk. A disgruntled KGB agent assassinates the Soviet leader, precipitating the collapse of the USSR and ending the war with the West.

The Third World War is not a work of great literary merit. The characters are thinly drawn, dialogue ranges from wooden to non-existent, and the author’s fascination with technical military terms will challenge the patience of even the most dauntless acronym enthusiast. At the same time, a dedicated reader can probably get through the novel in an evening. The plot is propulsive and there are moments of genuine suspense. Given that the author was not a novelist by training or inclination, it is pretty remarkable that the book turned out as well as it did.

John Winthrop “Shan” Hackett (1910-1997) had a varied and extraordinary career. Born in Australia, he went to Britain for his education, studying classics at Oxford. He joined the British Army and saw extensive service in the Middle East and Western Europe during the Second World War. A journalist observed that Hackett “seemed incapable of getting into battle at any time after 1936 without getting either wounded or mentioned in dispatches.” He commanded the 4th Parachute Brigade in Operation Market Garden, where he was badly wounded and escaped from behind German lines with the help of friendly Dutch villagers. After the war, he continued to rise through the ranks and developed a reputation as a forceful advocate for military preparedness. Hackett commanded British forces in Northern Ireland and, before his retirement in 1968, served as commander of the British Army of the Rhine (BAOR) and NATO’s Northern Army Group. After he retired, he continued to act as a public intellectual on defense issues and served as the Principal of King’s College, London.

A British publisher approached Hackett in the mid-1970s, following the success of several books predicting military doom for NATO. Hackett accepted a commission to write a fictional treatment of a general war. He enlisted an unwieldy committee of hawkish British defense thinkers, including a retired admiral, a writer for The Economist, and a former diplomat. The group met over copious drinks at various London clubs and sketched out a scenario. The story of how the novel came together, told through Hackett’s papers , is every bit as interesting as the novel itself.

The group’s initial vision was grim. Warsaw Pact forces would swiftly overwhelm NATO defenses and seize Bonn. However, under American leadership, NATO would regroup and launch an amphibious invasion of the continent two years later. NATO could win, but at a terrible cost.

A number of current and recently-retired NATO senior officers quietly urged Hackett to make radical changes to the manuscript, which they believed to be hopelessly pessimistic and a threat to civilian morale. If a prepared and robust NATO could not defend the borders of the Federal Republic of Germany, why should member states continue to support the alliance? Hackett agreed to scrap much of the manuscript and start again. In a letter, he expressed some frustration that his goal was “to tell a cautionary tale, always remembering that the object of a cautionary tale is to make children behave better. If all it does is to make them pee in their beds with fright it fails in its purpose.” The Third World War was to have a happy ending after all.

A reader interested in how the U.S. Army thought about itself and its future in the aftermath of the Vietnam War should have a look at Hackett’s work of fiction, because his depiction of the Americans came more or less directly from a senior American officer. Hackett had good working relationships with a number of American generals. One was William DuPuy, then commanding the new U.S. Army Training and Doctrine Command (TRADOC). DuPuy was retiring as Hackett worked on the first draft of the novel, and he supplied Hackett with dozens of pages of close analysis of American capabilities and likely response in the event of a land war in Central Europe.

DuPuy’s hopes for the Army he had helped shape made it almost directly into Hackett’s fictional war.

DuPuy’s letters are remarkable in that they present a reformer’s vision of what the U.S. Army could and should be in the shadow of the disaster in Southeast Asia. “The US Army was in better shape than anyone, especially the Soviets, realized,” wrote DuPuy in his contribution to Hackett’s fictional scenario. “Fully recovered from the Vietnam experience of more than a decade past the process of rejuvenation, modernization, and battle indoctrination had been pressed hard.” Here, one of the architects of what would become AirLand Battle got to sketch out his own off the record vision of what that might look like. DuPuy’s hopes for the Army he had helped shape made it almost directly into Hackett’s fictional war.

The Third World War was a massive commercial success around the world. It spent forty weeks on the New York Times bestseller list. Perhaps unsurprisingly, it sold particularly well among NATO troops stationed in Central Europe. One book chain executive called it “a major best seller. I’d rank it up there with The Godfather.” The author spent much of 1979 and 1980 touring the world. The novel found its way into public debates about national security at the same time that the Cold War was again heating up due to the Soviet invasion of Afghanistan. An AFROTC instructor at Rutgers University wrote to Hackett to report that his cadets “constantly reminded in our discussions of the Warsaw Pact in class that ‘But, Sir, Hackett said this’ or ‘Hackett said that.’”

The critics were not necessarily as kind. One reviewer wrote that the book’s endless technical details and acronyms left him with a case of “MEGO…that is: my eyes glaze over.” Michael Howard wrote in a very perceptive review in the Sunday Times that “the implications of this work are therefore grimmer than one might suppose, or than [Hackett] himself intended. Even if the West strengthens its defenses to a quite impossible extent, he suggests, this will not deter the Russians from attacking us, or do more than postpone the use of nuclear weapons by a couple of weeks.”

Hackett was unable to replicate the success of his 1978 debut. His 1982 sequel, The Third World War: The Untold Story, was a commercial failure. It is also a fairly terrible book, devoid of the previous volume’s energy and inventiveness but with all of its stilted dialogue and dour fascination with technical detail.

Hackett’s great accomplishment was to jump-start a genre. The early 1980s saw a wave of speculative military fiction, much of which owed at least some debt to the commercial success of The Third World War. The “techno-thriller” genre, projection of future conflict based on a deep immersion in military technology and doctrine, was certainly not new in the late Cold War. A hundred years earlier, potboilers like The Battle of Dorking helped to shape British popular ideas about national defense. H.G. Wells’ 1908 War in the Air or the Earl of Halsbury’s now largely forgotten 1926 novel 1944 (perhaps a subject for a future Dusty Shelves column) fostered emerging anxieties about the devastating impact of aerial bombardment on combatant societies.

However, the 1980s were certainly the golden age of the genre. American authors like Larry Bond and Harold Coyle (who explicitly set his 1988 novel Team Yankee in Hackett’s fictional war), drew upon late-Cold War anxieties and a public fascination with military technology. But Hackett’s clearest successor was Tom Clancy, and particularly his 1985 best-seller Red Storm Rising. As one review suggested, “It is a testimony to Clancy that the Maryland insurance man and war game aficionado has written a book on par with the work of Hackett, a former commander of NATO’s Northern Army Group who has been described as Britain’s foremost soldier-scholar.” As Benjamin Griffin has recently shown, Red Storm Rising replaced The Third World War in the eyes of Ronald Reagan, Hackett’s most influential fan. After all, in Clancy’s war, NATO won without any cities being reduced to radioactive rubble.

John Hackett’s novel is very much a product of its time. Like some of the other techno-thrillers that his work inspired, the end of the Cold War and the end of the military standoff in Central Europe relegated Hackett’s specific anxieties to the dustbin of history. Today, historians are once again looking at Hackett’s novel in light of contemporary geopolitics. With NATO forces again attempting to deter Russian adventurism in Eastern Europe and ongoing debates about how to contain Chinese power in Asia, the choices and decisions that Hackett envisioned in 1978 appear all-too relevant. Perhaps it is once again worth taking The Third World War down from the shelves.

Photo Description: Original graphic is a photo of a French nuclear weapon, specifically the test dubbed “Licorne,” a 914 kiloton thermonuclear shot detonated in 1970 at the Fangataufa atoll in French Polynesia. Modified by unknown.