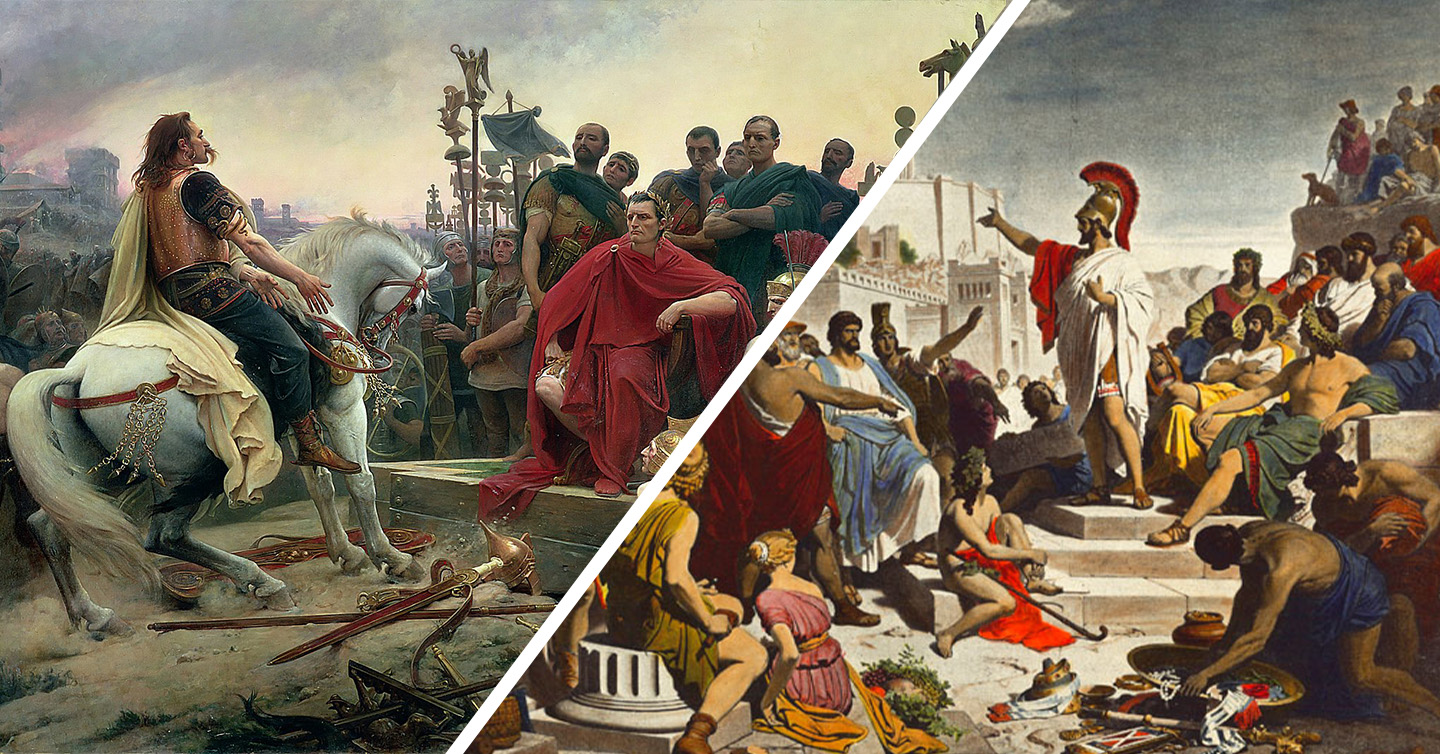 There is no good reason to think that there are only two forms of strategy, or that they are annihilation and exhaustion.

It is long past time to kill the idea that the basic strategic approach is between annihilation and exhaustion or attrition.

For Americans, the problems started with a single chapter in an edited collection of essays. Early in World War II, Princeton University Press published the first edition of Makers of Modern Strategy, edited by Edward Mead Earle. The book would come to have wide influence, identifying the most important strategic thinkers and establishing the categories by which we were to understand and talk about their thinking.

Chapter 11 was “Delbrück: The Military Historian,” written by Gordon A. Craig, a professor of German history. By Craig’s account, Hans Delbrück was an innovative military historian who applied scholarly approaches to a field dominated by practitioners in the late nineteenth century. His magnum opus was the four volume History of the Art of War in the Framework of Political History. Later, and especially during World War I, Delbrück became a prominent critic of contemporary German military affairs. In telling this story, Craig drew special attention to what he called “the most striking of all of Delbrück’s military theories…which held that all military strategy can be divided into two forms.” These forms were the “strategy of annihilation” and the “strategy of exhaustion.”

According to Craig’s summary of Delbrück, the first supposedly came from Clausewitz, and posited that “the aim of war is the complete destruction of the enemy’s forces and that, consequently, the battle which accomplishes this is the end of all strategy…. Its sole aim was the decisive battle.” Delbrück also called this “one-pole strategy,” with battle being the pole. In the second type, “the battle is no longer the sole aim of strategy.” Belligerents could avoid pitched battle and fight in other ways. This strategy of exhaustion Delbrück also called a “two-pole strategy,” the two poles being “battle” and “maneuver,” “between which the decisions of the general move.” Delbrück claimed Alexander, Caesar, and Napoleon were strategists of annihilation, while Pericles, Gustavus Adolphus, and Frederick the Great were examples of strategists of exhaustion. (Makers (1943), pp. 272-274).

At first, Delbrück’s theory, even with Craig’s endorsement, did not gain much traction with American military professionals and historians. That came later, in 1973, when military historian Russell Weigley came out with The American Way of War. In his introduction, Weigley discusses Clausewitz’s conception of war and cites Craig to draw on Delbrück, but changes the terminology of the “two kinds of military strategy” that Craig had attributed to Delbrück. Weigley identified “the strategy of annihilation, which seeks the overthrow of the enemy’s military power; and the strategy of attrition, exhaustion, or erosion, which is usually employed by a strategist whose means are not great enough to permit the direct overthrow of the enemy and who therefore resorts to an indirect approach.” Americans, according to Weigley, “made a promising beginning” with strategies of attrition, but that strategic option went away and “the strategy of annihilation became characteristically the American way of war.” (AWW, pp. xxi-xxiii)

Although Weigley meant this as a critique of American performance in Vietnam, Americans in and around the military adopted his argument as something of a how-to manual. Ever since, American military theorists, doctrine writers, historians, and most other students and practitioners of warfare have operated in a world where the two basic forms of strategy are annihilation and attrition and/or exhaustion.

The problem is that the whole idea is nonsense.

There is no good reason to think that there are only two forms of strategy, or that they are annihilation and exhaustion. The concept is theoretically incoherent, inaccurate for historical description, and dangerous in application, whether it comes from Delbrück, Craig, Weigley, or anyone else.

The theory did not start auspiciously. Delbrück wrote in an era when it was a German military pastime to misread or rewrite Clausewitz in order to confirm a bias for fighting short wars decided by one campaign that concluded with a single battle. Delbrück was arguing against this trend. Indeed, in his chapter Craig credited Delbrück with proving that “History showed that there could be no single theory of strategy [annihilation], correct for every age.” (Makers (1943), p. 274)

But Craig could not explain whether Delbrück’s work constituted a new single theory of strategy with two forms, correct for every age; or if it was two theories of strategy, and generals picked one or the other for any given age; or if it was some polar version of strategy, with either one pole or two poles, and one of those two poles consisted of the same name, “battle,” as the single pole form, all of which would be correct throughout the ages. The blame for such incoherence does not fall on some sort of misreading by Craig—even Delbrück’s most well developed explanations from later in his career are just as confusing.

Delbrück’s theory also failed to accurately describe history, as critics at the time noted. Germans especially disputed Delbrück’s characterization of Frederick the Great as a practitioner of a strategy of exhaustion, since the Prussian commander was well known for winning decisive battles, which were the supposed indicators of annihilation. But the point is not to settle this historical debate. The point is that debate could not be settled simply by correctly categorizing commanders and wars in the terms of strategy of annihilation vs. strategy of exhaustion, because the theory never could be applied in an accurate way to historical events.

Put all of this together and the whole affair looks like a mishmash of half-baked thoughts on maneuver, firepower, and sustainment poorly applied to the situation at hand and loosely linked to some abstract notion of what would win the war.

This confusion played out in a very real and terrible way in Delbrück’s own age, in the tragic fight for Verdun in 1916. German Chief of Staff Erich von Falkenhayn later attempted to justify the German attack there as a deliberate strategy of exhaustion where “the forces of France will bleed to death.” But the historical record suggests no such clarity of thought. Verdun was not an important strategic French site prior to the battle of Verdun, so there was no way to anticipate the French would stand there. If the Germans meant to attrite the enemy at greater rates than themselves, why did they continue to feed in ground troops in a series of frontal assaults on entrenched defensive positions and not just continue the heavy artillery bombardments? Further, since Verdun was a salient in the lines, it seemed to offer the opportunity for envelopment or even a Cannae-like double envelopment.

Put all of this together and the whole affair looks like a mishmash of half-baked thoughts on maneuver, firepower, and sustainment poorly applied to the situation at hand and loosely linked to some abstract notion of what would win the war. In other words, it looks exactly like an attempt to sort through Delbrück’s theory, and not by accident. Annihilation and exhaustion were the terms of debate, and prior to Verdun, Delbrück asked for and got a meeting with Falkenhayn, where it is clear he pushed for his exhaustion or two-pole strategy.

Russell Weigley’s revised version, which omitted Delbrück’s poles and did not treat annihilation as synonymous with decisive battle, was not any better. Weigley linked his strategic choices to an amorphous “way of war,” which conflated policies, strategies, campaigns, and tactics. In so doing, he unveiled a fatal flaw in the bipolar theory of annihilation vs. attrition, which is that you can use one to achieve the other, and vice versa. How can you distinguish between annihilation and attrition when you can annihilate through attrition or attrite through annihilation?

Weigley’s version of the theory also failed when applied to history. The American Way of War is a brilliant survey, but very little of it accords to “the two kinds of military strategy” theory upon which it is supposedly based. Weigley was too good a historian to get the history wrong, so the military strategies he describes range all over the place. In the chapter titles alone can be found “A Strategy of Partisan War,” “Napoleonic Strategy,” “A Strategy of Sea Power and Empire,” “A Strategy of Air Power,” and “Strategies of Deterrence and of Action.” Later, in response to a criticism of the two forms of strategy argument, Weigley agreed that it was a poor choice.

Much like in Delbrück’s case, a theory that was bad for description was even worse in attempted application. Coming as it did at the end of the Vietnam War, the annihilation vs. attrition argument got sucked into American military reforms and distorted to become normative. Even though Weigley was making the case that the American emphasis on what he called the strategy of annihilation had gotten the United States in trouble in Vietnam, military professionals read it the opposite way—as a war they lost because a strategy of attrition was foisted upon them by policymakers. Individuals ranging from Harry Summers to Colin Powell made a case that the only proper American application of military force was through some form of strategy of annihilation.

The problems with this view are manifold and well documented, but among the greatest is the distortion it created in civil-military affairs. It represented an attempt in doctrine and practice by the military to dictate to policymakers why, when, and how the United States could go to war, i.e.: only with clearly defined end states and so-called termination criteria and only with overwhelming force. American military leaders, brought up believing that their strategic options are annihilation or attrition, and further that some version of annihilation is the only correct option, still struggle in providing useful military advice to policymakers, because that advice tends only to be versions of overwhelming force or no war at all. When policymakers choose an option that, inevitably, fits somewhere entirely outside of or between the lines of the theoretical framework, military leaders struggle to adjust.

Alas, I know my intended audience, and I know the response. The annihilation vs. attrition categories are still valuable. They are just a starting point. They can help us understand and give us options. We can mine them for some nuggets of goodness.

But it is just not true. The model fails in theory, description, and application because it is fundamentally flawed. It fails at the most basic levels, becoming hopelessly muddled as soon as it is looked at using even our simplest heuristic for strategy: ends, ways, and means. It presents strategic options in a binary form, which in itself is inherently unusable, because such binaries imply either:

2). A scale relationship, which implies a progression from one end to the other, which is misleading (e.g.: it implies “attrition” is easier or “annihilation” is better); or

3). A spectrum relationship, which is so all-inclusive as to mean everything, which may be accurate, but also is not helpful.

Delbrück, Craig, Weigley, and the rest could not make the two forms of military strategy model work because it is unworkable.

It has been over 100 years, and nothing good has come of it. Dump annihilation vs. attrition and/or exhaustion. Stop teaching it, stop debating it, stop looking to it for insights.

In fact, don’t chase one perfect form of strategy at all, because there is no such thing. Military strategy—how we intend to win in war or a theater of war—entails the development and use of a variety of people and resources in a complex mix of approaches to pursue objectives that shift as the situation develops. Students and practitioners of military strategy would be far better off remembering that.