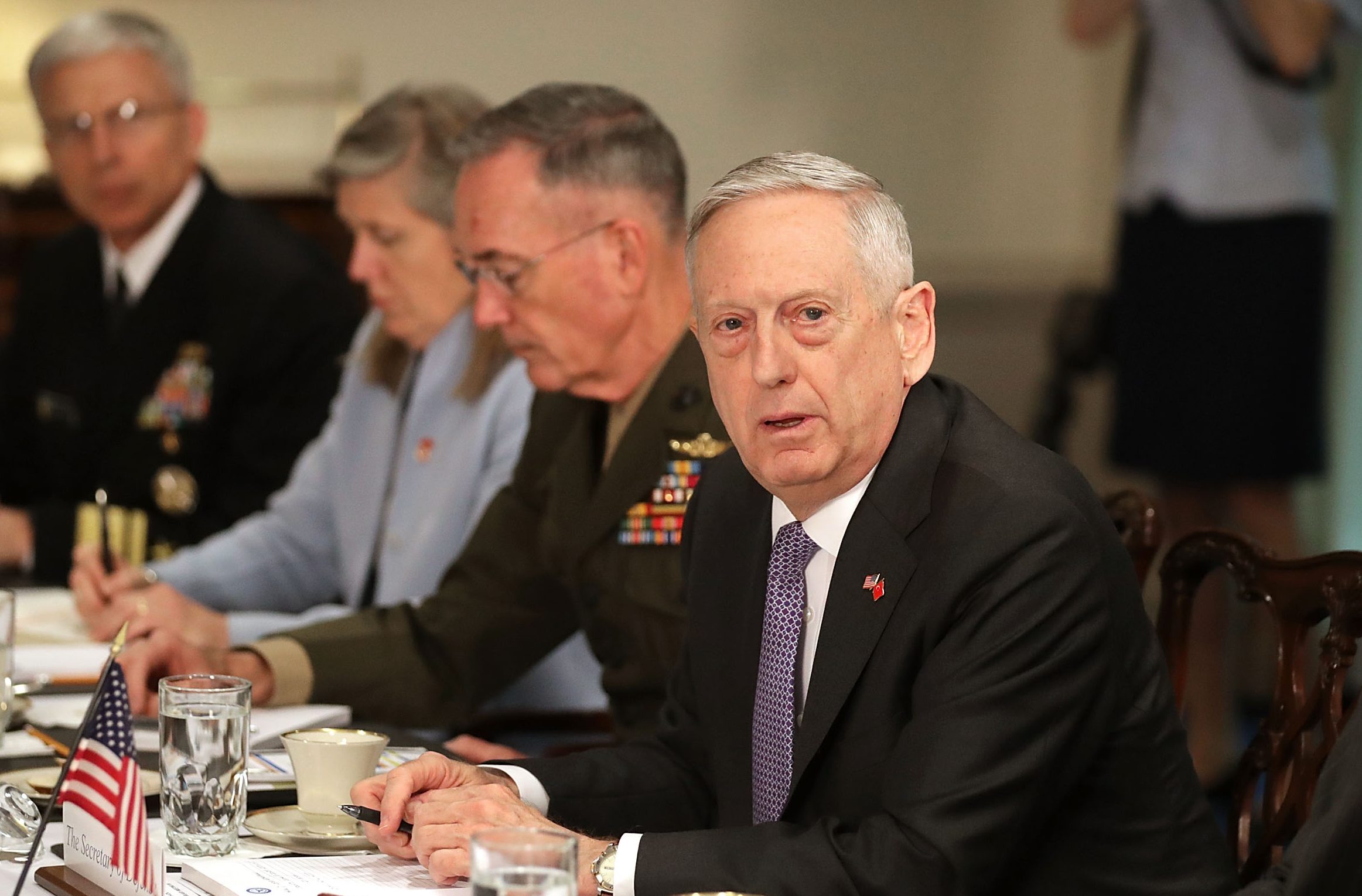 DoD strategy development and risk assessment cannot afford to rest exclusively on war plans that are never executed, scenarios that reinforce service biases, or nostalgia for competition as it once was, not as it actually is.

It is time for the Department of Defense (DoD) to develop a fresh risk perspective. Without it, 21st century threats and associated military demands will rapidly outpace the Pentagon’s 20th century bureaucracy. Fundamental change in DoD’s current risk convention should target how the enterprise describes, identifies, assesses, and communicates risk to itself and to its most influential risk-consumers. Frankly, there is no better time to take on this challenge, as Secretary of Defense Mattis develops a new defense strategy over the next 90 days. Recalibrating long-standing and outdated defense bias and convention should be job one. We suggest a fresh look at risk management and the employment of risk judgments in strategic decision-making as great places to start.

DoD’s conventional approach to risk exhibits three clear shortcomings. First, it is too short-sighted, focusing to a fault on near-term operational-level threats. Second, it lacks a meaningful connection back to concrete defense objectives and the core demands required to secure those objectives over the near-, mid-, and long-terms. Third, and largely as a consequence of the aforementioned two, current DoD risk conventions are insufficient catalysts for essential defense innovation and adaptation.

Much has changed about the international security environment and DoD’s current and future responsibilities in it, yet contemporary risk assessment remains exclusively wedded to the most tangible of immediate “known knowns.” It clearly must go further than acquainting the enterprise with its near-term operational shortfalls. In real terms, qualitative U.S. military advantages no longer guarantee either global primacy or local superiority and that problem will become more acute over time.

The Secretary’s immediate task is charting a reasonable, risk-informed, corporate path that maintains U.S. position in this environment by persistently seizing or re-seizing initiative against unyielding multi-level, multi-player competition. High-end combined arms warfighting and counter-terrorism are no longer sufficient risk “pacers” for force development. DoD strategy development and risk assessment cannot afford to rest exclusively on war plans that are never executed, scenarios that reinforce service biases, or nostalgia for competition as it once was, not as it actually is.

New perspectives and insights on defense-relevant risk must be products of a persistent high-level dialogue among DoD’s senior leaders, the kind that underwrites a new, high-performing, defense-wide risk convention. This dialogue and the risk outlook it supports should be designed to help the United States endure, outlast, and win consistently in the face of a dizzying array of “transregional, multi-domain, and multifunctional” hazards and demands now and in the future.

RAND’s Michael Mazarr suggests that strategic leaders such as Secretary Mattis should focus risk assessment on competing and succeeding in what he argues is “a complex, dynamic and competitive ecosystem.”  Indeed, for the foreseeable future, DoD’s most consequential challenges are equally likely to arrive via proxy war, the weaponization of information, political subterfuge, great power miscalculation, cyber-attack, or distributed disaffection and rage. If true, this requires a sophisticated approach to strategy and an equally sophisticated appreciation of risk.

The old, pairwise comparisons of competing “piles of iron” will no longer provide senior DoD leadership with the accurate, sophisticated risk picture it requires. In the current environment, old world indications and warnings will yield to a different set of considerations.  And, these will almost certainly demand innovation and adaptation by the American defense establishment.

Mazarr’s “complex, dynamic, and competitive ecosystem,” demands a more robust risk assessment concept which can serve as a catalyst for developing a more agile and adaptable defense enterprise. In this new environment, three factors challenge traditional approaches to corporate-level risk assessment in particular. First, the boundaries between war and peace are blurring — driven by the effectiveness of gray zone approaches, the continued weakening of state authority, and the strategic emergence of weaponized information. Second, effective counter-U.S. resistance is atomizing and growing more virulent. In short, the sources, vectors, and consequences of strategic-level hazards are more numerous, volatile, and more uncertain than they were even a decade ago. And, finally, there is an increasing likelihood of spontaneous — almost organic — conflict erupting or incipient conflict escalating in unexpected ways; all falling suddenly at the feet of the Secretary of Defense.

If DoD’s risk judgments are as simple as the consideration of “things that could go wrong with proposed strategies” as Mazarr suggests, Secretary Mattis and his team will have their hands full identifying the various trajectories by which disruptive hazards might arrive to threaten enduring defense objectives. No threat or countervailing U.S. military response, for example, is likely to materialize or unfold in the contemporary environment according to preferred American approaches or designs.

China, Russia, and Iran, for example, are, if nothing else, master manipulators of tactical, operational, and strategic conditions in ways that flirt with but do not breach commonly-recognized thresholds of overt military provocation. If and when purposeful adversaries do breach these thresholds, it’s doubtful their methods will permit the U.S. to employ an orderly and symmetrical defense of core interests. Furthermore, in a new age of more organic, stateless, viral, and distributed threats, Secretary Mattis’ new strategy will need to acknowledge the unsatisfying business of managing or containing defense-relevant challenges that cannot necessarily be defeated outright. We suggest that while the United States persistently hammers out “chop sticks,” the bad guys increasingly play jazz. Secretary Mattis’ new strategy must therefore help DoD and its constituent players embrace similar jazz-like asymmetry, improvisation, and innovation. To do so, DoD’s risk assessment must adapt as well.

The Secretary’s greatest challenge is to codify deliberate discipline, restraint, and realism into DoD’s new strategic outlook. It should reflect a cold, clinician’s approach to an impulse-driven world. That world is increasingly disturbed by security challenges that emerge more spontaneously, mutate faster and more frequently, and linger longer.  Thus, DoD’s new risk perspective should focus first on identifying the types of strategic choices that best enable DoD adaptation to changing threats.

Godspeed with the Strategy, Mr. Secretary:  It Won’t Be Easy but It Will Be Risky

Legend has it that Nero fiddled while Rome burned. American politicians can continue to fiddle too, with concepts like “exceptionalism” and “indispensability.”  Meanwhile, the world beyond U.S. borders gets hotter. Hostile actors and the contextual forces of disintegration and fragmentation are exploiting U.S. vulnerabilities to undermine American influence.

Across the spectrum of defense-relevant challenges, the United States is likely to remain a dominant global power. However, its unparalleled reach no longer assures that it gets its way. Guiding the Department through this high-stakes environment will not be easy. Effective U.S. defense strategy must acknowledge and account for the full set of hazards that may threaten U.S. interests globally. This includes a re-imagined defense risk portfolio populated by a diverse set of pacing challenges — all accelerated by seismic changes in the way nations and people relate to one another. What is certain in all of this is that an honest and thoroughgoing appraisal of contemporary hazards, demands, and associated risks will no doubt render new — even surprising — defense priorities.

Admittedly, any progress in changing how DoD analyzes and assumes the risks associated with defense priorities will be challenging. Regardless of whether or not U.S. policymakers and military leaders are agents of an ‘exceptional’ or ‘indispensable’ nation, they are for sure the guarantors of a powerful, globally engaged, and activist great power. The United States remains the world’s principal actor of consequence. And, it remains motivated to secure a long and varied list of interests from the threats of purposeful actors like Russia and North Korea, and of contextual disruptions like contagious violent instability.

Secretary Mattis’ new defense strategy and its outlook on risk will inevitably get some things wrong. That is okay. The goal is to get most things right enough. A more forward-looking and perhaps revolutionary defense-wide concept for risk and risk assessment can help in this regard.  However, this will require DoD to dispense with some tradition, convention, and bias that has held on for far too long already.