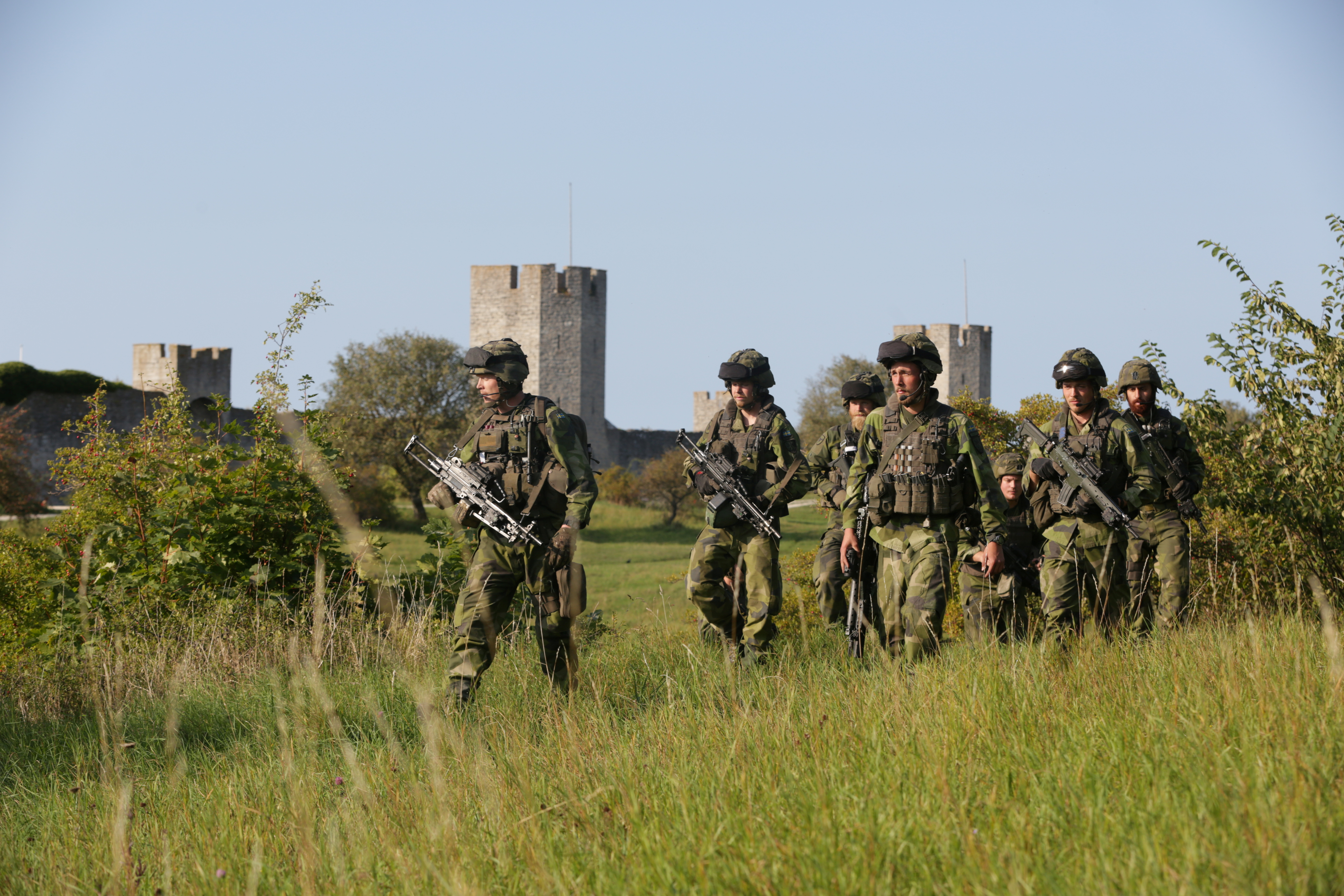 The Arctic is definitely heating up — in more ways than one

As the West wrings its hands at Russia’s fait accompli in Crimea, another strategic area, of perhaps even greater strategic significance, requires urgent attention. The sub-region known as the “Cap of the North” (“Nordkalotten,” or “Pohjoiskalotti,” locally) is critical to Northern European and Arctic security. Not to be confused with the tiny ‘North Cape,’ the Cap of the North is a broad territory lying north of the Arctic Circle. It comprises northernmost Norway, Sweden, Finland, and part of Russia’s Kola Peninsula. Whichever power commands this area can use it as a base to deny its rivals regional access.

Meanwhile, the United States’ latest National Security Strategy identifies Russia and China as competitors who are striving to revise the current world order. Conflicting national values and interests will likely be the root cause if such competition escalates to an armed conflict. If it does, revisionist Russia and China’s bids for advantage may all but turn smaller nations inhabiting regions such as the Arctic into geopolitical pawns for the taking.

The Arctic is definitely heating up — in more ways than one. Beyond climate change, a geopolitical competition for influence simmers. Russia, like China in the South China Sea, is challenging the current world order by making territorial claims on the global commons and by challenging international borders and freedom of navigation. Russia’s annexation of Crimea, and China’s manmade islands and claims of an air defense identification zone in the South China Sea are obvious examples. As a result of its position in the South China Sea, China supports Russia’s territorial claims regarding its freedom of navigation in the Arctic. Thus, the Northeast Passage is expected to be a significant and controversial sea route in the future, one through which both China and Russia hope to create a ‘Polar Silk Road.’

Such ambitions partly explain why Russia is rebuilding and advancing its military capabilities, to include in the Arctic, where it has vital interests near the Cap of the North. Aside from its recent addition of a handful of new installations and units, Russia has long maintained its Northern Fleet’s headquarters and home base near Murmansk on the Kola Peninsula, which harbors Russia’s most-important strategic submarine base, and therefore much of its second strike capability. It supports all three of Russia’s most important strategic objectives: (1) remaining a nuclear power; (2) maintaining its great power identity; and (3) achieving regional hegemony – politically, militarily, and economically. Russian interests regarding the Arctic are specifically mentioned in its latest National Security Strategy, which reflects the reasons for its military buildup.

Though both Sweden’s Chief of Defense and Minister of Defense assess that an isolated, armed aggression against Sweden is unlikely, its territory may nevertheless be a valuable target of opportunity. The Cap of the North’s increasing strategic importance in the renewed great power struggles for influence, attempts to reshape the world order, and drives for greater access to natural resources, demand strategic attention. In the ongoing competition between the United States, Russia, and China, smaller nations such as Norway, Sweden, and Finland are treated like tokens on a geographical gameboard. They are forced to react to their security context, in order to influence their situations in their nations’ best interests.

Any small nation must either create the conditions necessary to influence matters alone or it must ally itself with others. For example, the current Swedish National Security Strategy focuses on diplomacy and soft power, often expressed in forums such as the Barents Council and the Arctic Council — venues where Sweden hopes to influence its current situation. Both of these forums are currently more or less in consensus about how to handle many local, sub-regional issues without involving either the North Atlantic Treaty Organization (NATO) or the European Union (EU). However, the security dilemma in the northernmost parts of Sweden and Finland consists of a very small military presence which leaves an essential void from a defense standpoint. It therefore lies vulnerable to being contested by an adversary which is determined to do so.

In response to any aggression in the Cap of the North sub-region, Nordic territories, airbases, and the airspace above them must set the conditions for a possible U.S. intervention, should one become necessary. But host nation assets can only be ready if they receive the same strategic priority that other vital areas do, such as Sweden’s recently-remilitarized Gotland Island. The Northern Nordic states and the Cap of the North are in fact more significant in the overall competition for resources and for access to the global commons. Thus, the Cap of the North demands a higher defense priority than it currently has.

Norway, an Alliance member since NATO’s founding in 1949, is already concentrating military resources in its northern region. The United States has prepositioned some Marine Corps resources there; however, Norway’s border with Russia remains vulnerable.

Finland, which like Sweden is not a NATO member, also shares a long border with Russia. History has taught Norway to keep a clear view of defense with respect to its neighbor. In its domestic ‘guns vs butter’ discussions, Finland has chosen to accept less-technically advanced warfighting systems in order to afford more units skilled at cold-weather combat.

As for Sweden’s military situation, it has only one Army garrison and one fighter wing in the northern part of its territory, as a result of cutbacks made after the fall of the Soviet Union. Sweden’s recent reimplementation of regional commands and its concept of ‘Total Defense’ are important measures to conduct effective command, control, and coordination of its national resources. However, the distance from the Cap of the North to greater Stockholm’s closest military base presents a significant defense challenge. Between Sweden’s northern and southern bases, there are a number of important tactical and operational home guard and small training units which are highly-competent; but in a strategic context, they are insufficient.

Time may be running out, as tensions continue rising in the Arctic. Russia continues militarizing its presence

Meanwhile, the Swedish National Security focus for the last several years has been on the Baltic Sea and on the enduring importance of its geography. A major concern is that an actor who controls Gotland Island will be able to control the air and surface of the southern Baltic Sea. If Russia were able to place anti-access/area denial (A2/AD) assets on Gotland, it would create a very difficult situation for any NATO reinforcements trying to reach the Baltic States. Sweden demilitarized Gotland in 2004, leaving a defense void which became a security dilemma in light of Russia’s annexation of Crimea in 2014. Therefore, in 2017, Sweden remilitarized Gotland. A military presence there contributes to regional stability by preventing a similarly easy land grab of that strategically-important territory. The need to prioritize between the Cap of the North and Gotland, however, risks losing oversight of a larger strategic picture. By only focusing on the most obvious problem, Sweden may make itself vulnerable to ‘Maskirovka,’ a particular Russian specialty of strategic deception, to take what it wants.

Russia currently insists its territory extends to the North Pole, which increases the risk of a conflict in the area. By asserting that Lomonosov Ridge is an extension of its continental shelf, Russia claims that a large part of the Arctic Ocean lies within its exclusive economic zone (EEZ), as defined by the United Nations Convention on the Law of the Sea (UNCLOS). Furthermore, Russia and Norway have tense, conflicting territorial claims within the area.

As for non-NATO Sweden and Finland, they share a “Gotland dilemma” in the north. The military geography of the Cap of the North and how modern A2/AD assets provide sustainable control of the air, ground, and sea, explains the Cap’s strategic importance. As one follows the Arctic Circle on a map, one quickly realizes that any adversaries’ A2/AD assets located in these two nations might pose a serious obstacle to air and maritime operations in, or coming from, northern Norway. Alternatively, friendly forces there can obstruct operations in and around Russia’s strategically vital Kola Peninsula. Accordingly, control of the Cap of the North is essential in any escalating competition or open conflict in the Arctic. If this currently ’deserted land’ in northern Finland and Sweden is perceived as an easy grab, Russia may accept another few years of bad relations with the West, just to reap the Cap of the North’s long-term strategic advantages instead. The Russian annexation of Crimea in 2014 showed how hard it is for the world community — and even superpowers such as the United States — to act, when faced with a ‘fait accompli,’ especially when there is no binding treaty or alliance commitment to honor.

In this context, it is important to remember that sustainable control of the land domain can only be achieved by the permanent presence of ground forces. Deploying ground forces is often the last action taken by policy makers and it is therefore also a clear sign of commitment.

The new regiment on Gotland signals just such a clear commitment, as does NATO’s establishment of its enhanced Forward Presence (eFP) in the Baltic States and Poland. Both demonstrate the importance of ground forces. Airpower and global strike capabilities can deter to some extent, but they cannot present the obstacle needed to deny opponents’ ground operations.

In the Cap of the North region, there are already Norwegian, American, Swedish, and Finnish ground forces which could serve as the backbone of a Nordic division. However, there is a long way to go before command and control, combined training, and interoperability could reach the level at which gains surpass frictions and the full potential of a division-sized unit could be reached. It will take even longer without a firm commitment.

Political frameworks are the foundation for military cooperation. Sweden recently signed political agreements with Finland and an important trilateral agreement between the U.S., Finland, and Sweden. Our common values and shared interests strongly suggest increased military cooperation with our neighbors and partners is possible. Thus, it is of great importance that Sweden, together with the United States, and other Nordic stakeholders, develop a joint strategy to defend the Cap of the North.

Time may be running out, as tensions continue rising in the Arctic. Russia continues militarizing its presence; the polar ice cap continues melting; and the competition for routes and resources continues as well. One thing that should not continue, is the current dilemma over which “Gotland” demands a robust defense. They both do.