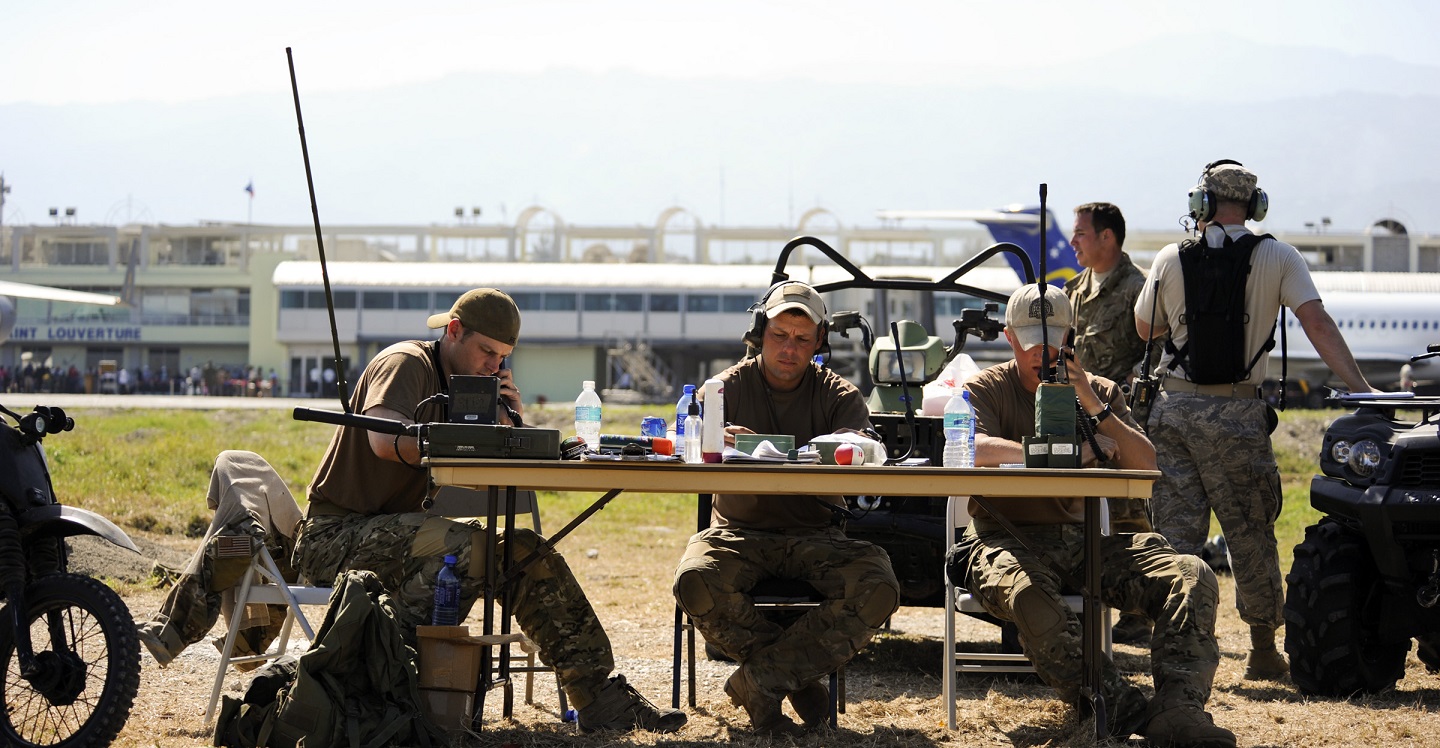 It is no secret that the U.S. and Chinese currently compete for influence throughout the world, not only in the Asia-Pacific, but also in regions such as Latin America, Africa, and the Middle East.

The United States has pivoted from a military strategy focused on countering violent extremist organizations (VEOs), to one more focused on the “reemergence of long-term, strategic competition” with states such as China. This strategic competition may take many forms, but it does not preclude the United States and China from working together to achieve specific goals. Various paths to bilateral cooperation may exist, but one particularly fruitful one may be in using Special Operations Forces (SOF) to execute humanitarian assistance and disaster relief (HA/DR) operations. Joint SOF HA/DR operations with China would demonstrate the United States’ commitment to cooperate in the international arena, even with competing states, and it would open a dialogue to build future partnerships around humanitarian relief and peacekeeping with other Asian partners.

The Case for U.S.-Chinese Cooperation

The nature of the U.S.-China relationship is a source of significant disagreement in policy and academic circles. Harvard professor and originator of the term “Thucydides’ Trap” Graham Allison argues the U.S. no longer sees China as a “strategic partner, but a strategic adversary.” If China poses a threat to U.S. national security, then encouraging interoperability between the two would be folly. Others, however, believe that China must be viewed as a strategic partner first, especially in light of America and China’s many mutual entanglements on the economic, social, and political fronts. If China is a potential strategic partner for the United States, then cooperation may be the smarter strategic option.

It is no secret that the U.S. and Chinese currently compete for influence throughout the world, not only in the Asia-Pacific, but also in regions such as Latin America, Africa, and the Middle East. This can be seen through strategic competition efforts to include infrastructure building, technological development, and even military engagements.  In doctrinal terms, this might be understood as competition below the level of armed conflict. In this competitive environment, it would be easy to view every interaction as a win or a loss in a zero-sum game. However, I argue that the benefits of cooperation outweigh the risks. Many American communities, including political leaders and the military, would benefit from such an arrangement, and cooperating on humanitarian missions has relatively few drawbacks when compared to other types of joint military cooperation.

On a political level, the benefit of cooperation on HA/DR operations would enable the U.S. to demonstrate its ability to partner successfully with the Chinese, paving the way for international dialogue to avert potential crises. Opening up lines of communications and dialogue with other individuals, even adversaries, can lead to resounding successes. One historic precedent that demonstrates this avenue of approach is the Moscow-Washington hotline, a system set up in 1963 that still allows for direct communication between the leaders of both Russia and the United States. Additionally, the benefits of joint participation in combined HA/DR efforts to save lives and alleviate suffering may be worth the political price of such an operation.

The United States, however, has traditionally been averse to such cooperation with the Chinese government, particularly due to concerns emerging from the National Defense Authorization Act for Fiscal Year 2000 (Public Law 106-65). This law clearly prohibits the U.S. from conducting military-to-military engagements that would result in a “national security risk due to inappropriate exposure” to a variety of specific sensitive topics, to include force projection and joint combat operations. However, the same law does permit for HA/DR operations, with the U.S. conducting very limited joint training with the Chinese during large-scale military exercises such as Rim of the Pacific (Hawaii) and Cobra Gold (Thailand) in recent years. All in all, a bilaterally led humanitarian effort could only bring value to helping other nations recover from such a tragedy. America’s technical expertise, combined with Chinese manpower, would negate any potential harmful effects of such an effort in searching for the greater good.

With a mission steeped in unconventional warfare and a robust expertise in working with partner nations, U.S. SOF has the ability to successfully carry out joint missions, training, and exercises.

In addition to the potential humanitarian benefits of cooperation, the U.S. military and intelligence services may also benefit from joint U.S.-Chinese operations. Relatively little is known about Chinese SOF as they have not been truly battle-tested. While operations in the Middle East and Africa have provided fertile proving ground for many countries’ SOF capabilities, China has not participated in these. Thus, cooperation between U.S. and Chinese SOF would enable American military forces to better understand the intricacies of operations and readiness levels of Chinese SOF. Being able to evaluate those capabilities in a dynamic environment would provide a higher intelligence value than when compared to a relatively static training scenario.

With a mission steeped in unconventional warfare and a robust expertise in working with partner nations, U.S. SOF has the ability to successfully carry out joint missions, training, and exercises. This type of HA/DR effort by SOF may range from assistance in large-scale disasters such as in 2005’s Operation Unified Assistance, to more localized relief such as in the 2015 Nepalese earthquake crisis. In both of these cases, China also provided both equipment and personnel in support of HA/DR efforts, though not in conjunction with the United States. American SOF has the ability to provide expertise to victims of natural disasters without compromising national security while also providing analysis of Chinese capacity and capability.

The United States military has a unique role to play within the international system, usually serving as the proverbial ‘stick’ in coercive diplomacy. However, SOF’s capabilities allow it to be the ‘carrot’ as well, boasting flexibility in its initial responses, providing known and proven capabilities, and demonstrating an ability to establish a strong support base in austere environments. Special Operations Forces are strategically, operationally, and tactically adaptable, which makes them the perfect focal point for enhancing U.S.-China military cooperation.

A strong initial response in support of a HA/DR mission might include the immediate deployment of life-saving equipment and material to the specific disaster location, with joint interoperability allowing for rapid deployment of such resources to an area. International cooperation saves lives. For example, in response to the 2015 Nepalese earthquake, the United States established Joint Task Force 505 which integrated a variety of different teams, including a Government Medical Team from China. Special Operations Forces also have organic capacity that includes logisticians, transportation, and movement personnel within itself, so using SOF in this way might allow for more rapid deployment of heavy equipment such as tractors and cranes. In Nepal, these organic capabilities meant that Chinese trucks and resources were able to bring other reliable U.S. equipment in-country to assist with relief efforts. These types of efforts have helped states to jump start recovery after a natural disaster, ensuring the delivery of much-needed supplies and expertise to local populations.

Additionally, the presence of skilled support personnel trained in a variety of procedures and tasks related to the fluid operating environment of HA/DR operations is also critical in the immediate aftermath of a natural disaster. This type of working knowledge base would be bolstered even further if established in a joint environment between both U.S. and Chinese groups. The support base may encompass a variety of social, disaster, and other emergency services focused on rebuilding the affected community. For example, in the aftermath of the 2010 Haiti earthquake, SOF personnel helped to re-open the Port-au-Prince airport, provided on-ground assessments of critical infrastructure damage, and assisted in conducting an “effective strategic communications plan to get out in front of the expanding media presence.” With personnel who specialize in engineering, medicine, administration, and communications skills, a joint SOF effort would be the asset best-suited for such an operation, helping to provide the fastest and most relief in an HA/DR crisis.

Lastly, being able to provide sustainable relief and training is key to ensuring a return to normal operations soon after a disaster, and to build capacity to respond to future disasters. SOF Subject-Matter Experts (SMEs) bring a very specialized yet trainable set of qualities dynamic environments, ranging from  helping local medical providers establish a working base of knowledge for an affected populace, to basic building and sewage construction techniques that could allow for temporary infrastructure re-development in the aftermath of an HA/DR event. For example, in the aftermath of Hurricane Andrew in 1992, SOF SMEs assisted in HA/DR efforts and Special Forces medical personnel provided life-saving aid for affected individuals. These SMEs would now be called military information support teams (MIST), and they disseminated critical details about recovery centers, debris cleanup areas, and more via radio, print, and loudspeaker mediums.

SOF is the best-suited tool to help establish and build joint U.S.-China humanitarian and disaster relief operations throughout the world. The dynamic skillset and abilities of SOF personnel from both nations make them ideal candidates to help foreign partners recover from disasters, with a large breadth of skills from fluency in local languages, to AOR-specific location knowledge, and finally, to an ability to teach and train local populations to better establish themselves and their communities for future success.

The U.S and China have had a tumultuous relationship in recent years, primarily due to intense and sometimes aggressive or even hostile political rhetoric from both sides, resulting in conflicts such as the ongoing U.S.-Sino trade war. These political tensions, as well as differing and competing perspectives on regional questions such as territorial claims in the South China Sea and the status of Taiwan (to name just two), have made each country view the other with suspicion and a relatively negative perception of the other.

Nevertheless, when both countries stepped in to respond to the disaster in Nepal in 2015, it demonstrated a capacity for cooperation around a shared goal. It presented the United States an opportunity to establish itself as a premier partner in the region, showcasing its ability to create a positive impact with its military and economic might. These efforts are underscored and strengthened when they are accomplished alongside China, allowing China to develop its own HA/DR capabilities in a way that is compliant with global norms. Joint humanitarian assistance and disaster relief operations offer the two countries a perfect opportunity to open lines of communication while helping relieve human suffering around the world. However, with this type of cooperation comes some risk that China might be able to assess previously unknown American capabilities. This is why American Special Operations Forces are uniquely suited to conducting such bi-lateral tasks. With a proven ability to work well in foreign environments and a very robust program aimed at training local force, SOF is the best tool the government can utilize to provide enhanced assistance to humanitarian relief efforts, no matter where they be throughout the world.

By combining forces in spite of current political differences, both America and China have the potential to demonstrate their respective abilities to come together in order to curb the effects of deadly unforeseen natural disasters.

Hugh Harsono is a former financial analyst currently serving as a U.S. Army Officer. The views expressed in this article are his own and do not necessarily represent those of the U.S. Army War College, U.S. Army, or Department of Defense.

Photo: Combat controllers talk to aircraft circling the Toussaint L’Ouverture International Airport in Port-au-Prince, Haiti, Jan. 23, 2010. The Airmen are from the 23rd Special Tactics Squadron at Hurlburt Field, Fla. Aircraft from all over the world are flying in and out of the small airport to drop off humanitarian aid and transport people out of the Haiti after the devasting earthquake that hit the nation Jan. 12.