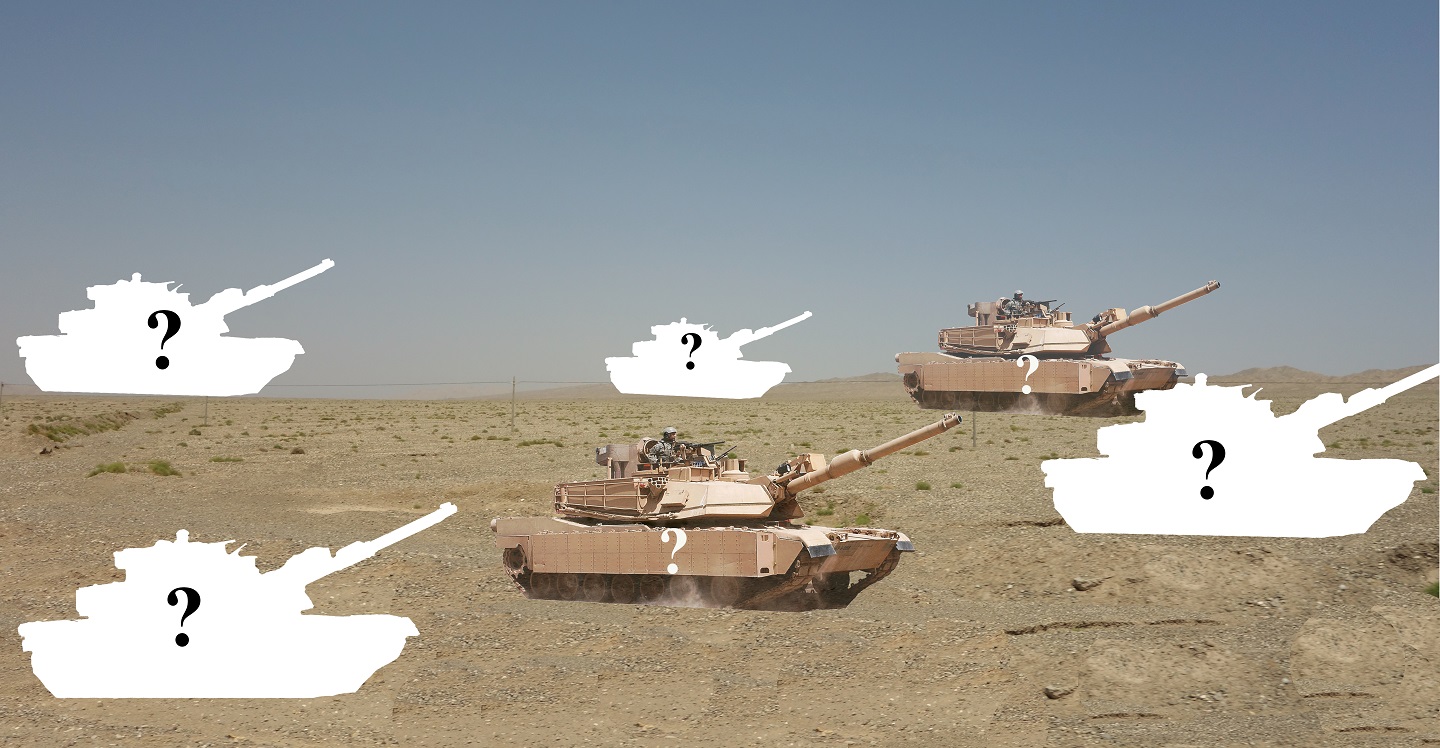 THE EXTENT TO WHICH THE U.S. MILITARY HAS EMPLOYED DECEPTION, PARTICULARLY DECOYS, HAS VARIED OVER TIME BUT IS CURRENTLY AT A LOW

The militaries of both Russia and China have become increasingly adept in finding enemy units by searching for signatures in the electromagnetic spectrum. Coupled with those militaries’ precision, standoff weaponry and anti-access/area-denial capabilities, this development dramatically increases the risk to U.S. forces in case of conflict. The 2018 National Defense Strategy envisions forward and quick-reaction forces in “contact” and “blunt” layers that will likely initially fight outnumbered. Necessity will dictate these small units disperse and hide to survive, but this will also create opportunities for the imaginative use of tactical decoys that mimic formations of Soldiers and Marines. More broadly, it will be possible to use friendly activities in the electromagnetic spectrum to revive the long neglected field of deception operations.

The extent to which the U.S. military has employed deception, particularly decoys, has varied over time but is currently at a low after two decades of neglect in favor of capabilities for counterinsurgency. This has not always been the case. When facing capable adversaries with robust artillery or air forces, like Nazi Germany or the Soviet Union, American forces made more use of decoys. In the late 1980s, the U.S. military employed tactical decoys for fighting vehicles, like tanks. These inflatable decoys gave small units the ability to appear twice as large as they were in reality — a platoon of four tanks could appear to be eight, potentially scaring off a smaller enemy force or creating a diversion. The army codified deception in white papers and doctrine. Unfortunately, even when such decoys were available they were not used, according to research by an army officer at the time. “Most [units] simply kept the decoy systems sealed and stored in the supply room (for the sake of hand receipt integrity).” After decades of uncontested air dominance and counter-insurgency tactical decoys are missing in action.

With Russian and Chinese electromagnetic spectrum targeting capabilities, Soldiers and Marines will again need decoys at the tactical level but they must be more sophisticated than the inflatable dummies of the past. To be effective, decoys need to imitate the signature that an adversary is searching for. As they exist now, radios at the squad, platoon, and company levels are easily identified on the battlefield by adversary electronic warfare assets. But having decoys for those systems would turn that liability into an asset. Electromagnetic spectrum decoys could be manufactured at a fraction of the cost of the radios that they imitate because they need far less functionality. They should be cheap, rugged, and disposable. Ideally, they could be delivered across the battlefield by a foot patrol, a drone, or dropped from a helicopter or airplane. There has been a desire for systems like these for decades. In a 1985 Naval Postgraduate School thesis, one officer argued for “rugged pieces of decoy equipment that can be quickly emplaced by front line soldiers to confuse enemy target acquisition.”  Once fielded, the only limits to employment would be the creativity of the employer and the need for coordination with higher echelons.

New naval concepts like Expeditionary Advanced Base Operations (EABO) and the classified Distributed Maritime Operations (DMO) emphasize dispersion and distribution for survivability and operations in the electromagnetic spectrum and will increasingly rely on decoys and deception for success. These ideas, however, are applicable to the Army and Air Force as well. The senior Air Force officer in the Pacific recently called for greater use of deception in the region. To conduct EABO and DMO, naval forces will need to better understand and manage their signature on the battlefield that is the physical, administrative and technical signs and patterns their activities exhibit in the surrounding environment. In his recent planning guidance, General David Berger, Commandant of the Marine Corps stated: “Friendly forces must be able to disguise actions and intentions, as well as deceive the enemy, through the use of decoys, signature management, and signature reduction.” The 2016 Marine Corps Operating Concept was even more succinct: “To be detected is to be targeted is to be killed.”

Decoys are not a one trick pony; they can be employed to achieve several different effects on enemy forces. Commanders might drop decoys away from their forces as an electromagnetic feint or as bait to lure enemy artillery to expose themselves. Alternatively, commanders might choose to increase the apparent size of their force, making a company look like a battalion or a battalion look like a brigade. Mobile decoys employed en masse could serve as a demonstration. The decoys could be either air dropped or driven, mimicking an assault. Finally, a commander could saturate an entire area with decoys to mask the signature of actual forces and paralyze adversary decision making. This tactic would negate any adversary advantage in electromagnetic spectrum intelligence gathering.

If the services are serious about having their combat forces persist within range of enemy long-range fires, they need to better manage their electromagnetic signatures.

In recent war games jointly sponsored by the Defense Advanced Research Projects Agency, Marine Corps University, and the Army Reserve’s 75th Innovation Command, decoy command post emissions were particularly effective in confusing adversary fires and targeting. In the words Sun Tzu, “Set up decoys and feign confusion, and give the enemy the impression we are about to quit our position. Then select our elite mounted troops, and send them on ahead into enemy territory under a cloak of silence.” It is also possible that an enemy commander could privilege electromagnetic intelligence over traditional visual sightings (or lack thereof). Simply sowing confusion through conflicting reports can disrupt the enemy and delay their response. The more that adversaries compress their electromagnetic collection and targeting cycles, the greater the potential of that form of deception in comparison to more traditional means.

Fortunately, the U.S. military recognizes the need for deception and force protection in the electromagnetic spectrum. The super high-fidelity ADM-160 Miniature Air-Launched Decoy (MALD) jointly created by the Defense Advanced Research Projects Agency and Raytheon in the early 2000s is an airborne decoy with a range of over 500 miles that “looks like a U.S. or allied aircraft to enemy integrated air defense systems” in order to support offensive air missions according to Raytheon’s website.

Unfortunately, the MALD is representative of a bias toward the exquisite and expensive in the belief that modern sensors and analytics will make it increasingly difficult for decoys to be effective. But that school of thought applies the wrong standard to decoys. Decoys do not need to stand up to rigorous examination; they only need to complicate the adversary’s decision making to be effective. Even relatively low-quality decoys can be effective; many tactical situations would require only the creation of confusion and misdirection for some part of the enemy intelligence-reconnaissance complex for a short period. Also, we should not overestimate the potency of sensors. Even the most refined sensors linked to artificial intelligence can be fooled. Earlier this year, Chinese researchers demonstrated that with simple imagery they could manipulate and sabotage the self-driving functions of a Tesla. A RAND Corporation publication on deception argued that small attempts at deception are still worthwhile. During the 1990s, Western analysts and pilots in the Persian Gulf and Balkans were fooled into dropping bombs on boards and bed sheets arranged to look like tanks, while completely overlooking tanks next to burning tires. As one Defense Department official told the New York Times, “One of the big surprises was the extent to which the Yugoslav military was able to use ground decoys to cause us to strike targets that weren’t real.” In 2006, Hezbollah employed a complex system of decoy bunkers and positions that absorbed and blunted much of the Israeli air campaign. On a modern battlefield, forcing enemy indecision or uncertainty for even a brief period of time can be decisive.

If the services are serious about having their combat forces persist within range of enemy long-range fires, they need to better manage their electromagnetic signatures. But signature management is not the same as signature reduction; reduction is only half of it. A robust signature management plan would also employ additional active signatures for deception. This requires effective, rugged, cheap electromagnetic decoys. Technological advances are creating enormous opportunities that require only imaginative tactics coupled with relatively simple engineering. An electromagnetic spectrum decoy that imitates common tactical radios could be small enough to be carried in a pocket, cheap enough to be produced in the thousands, and simple to employ. Such a device would help  negate adversary advances in electronic warfare and could increase the survivability of Army and Marine ground combat forces at the forward edge of the battle space without forcing them to dramatically cut back on their own use of the EM spectrum for communications or forcing them to redesign their communications architecture.

It is likely that the most effective and creative uses of decoys will only be discovered with actual use. The ideas presented in this article are just a start. Ultimately, tactical electromagnetic decoys cheap tool with potential operational and strategic effects.

Captain Walker D. Mills is a Marine Corps infantry officer currently assigned as an exchange officer in Colombia. He has previously published commentary for the Center for International Maritime Security, West Point’s Modern War Institute, the Marine Corps Gazette and Proceedings. The views expressed in this article are those of the author and do not necessarily reflect those of the U.S. Army War College, the U.S. Army, the U.S. Marine Corps, or the Department of Defense.