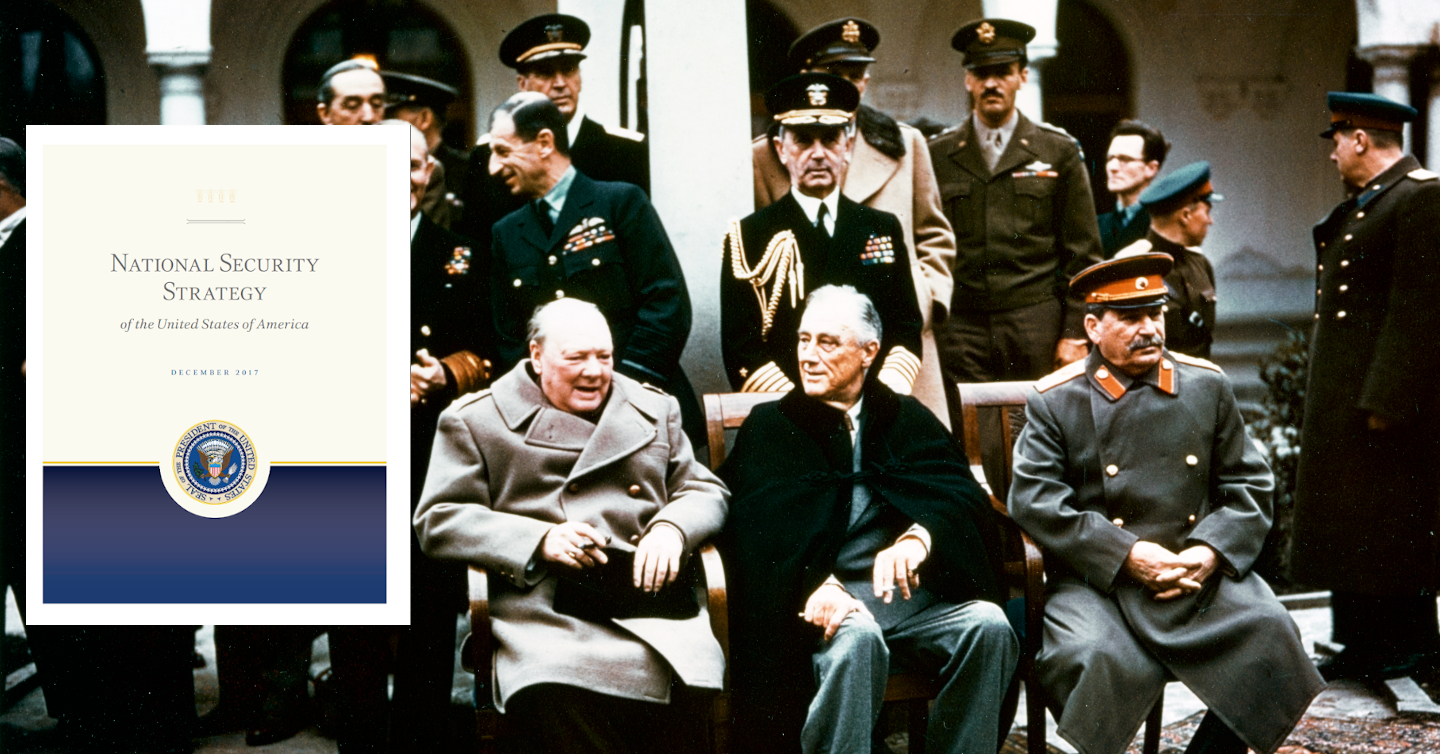 A grand strategy defines a country’s interests, the threats to those interests and the policies as well as the military forces to defend them.

For this Whiteboard we reached out again to several scholars at the Bush School of Government and Public Service, Texas A&M University. We sent them the following prompt:

What good is grand strategy?

What good is grand strategy? A grand strategy defines a country’s interests, the threats to those interests and the policies as well as the military forces to defend them. In particular, a grand strategy can help policy-makers evaluate the costs and benefits of American military commitments abroad. Today, the United States is trying to balance several interests: China’s rise as a potential peer competitor along with its other regional commitments, against a growing federal debt and the increasing need to spend more money at home than abroad. The needs of retiring Baby Boomers seem more pressing than exporting democracy to the Middle East at the end of a bayonet. In this context, the U.S. should adopt a more restrained foreign policy. Advocates of Restraint understand American preeminence is not permanent. As the fictional British Prime Minister Francis Urquhart explained about the fall of Margaret Thatcher in the original (and best!) version of the House of Cards: “Nothing lasts forever. Even the longest, the most glittering reign must come to an end someday.”

Consistent with this view is a grand strategy of Offshore Balancing, which defines U.S. interests narrowly to protecting our sovereignty, territorial integrity, and safety of the homeland. The U.S. is very secure: possessing favorable geography, weak neighbors, thousands of nuclear weapons, and a navy that commands the maritime commons. American policy-makers should, therefore, wisely save its resources for future challenges. In this strategy, the United States would limit its forward-deployed military presence, only sending forces abroad to act as a balancer of last resort against a country poised to dominate its region— as the U.S. did in both World Wars and the Cold War. When adopting Offshore Balancing, policy-makers should ask the following questions: What military threats does the U.S. face in each region? Can local powers address them? What are the benefits and risks of a reduced U.S. presence?

The answers to these questions indicate the United States can safely remove its military presence in Europe and the Middle East. Ideally, the U.S. would remain part of NATO, but shift the responsibility of Europe’s defense to Europeans. Russian military power is nowhere near as capable as the Soviet Union. France, Germany, and the U.K. have the capacity to deal with a revanchist Russia, if they see it as a threat. The situation in the Middle East is similar. Iran cannot dominate the region and would have trouble projecting power to conquer territory. The U.S. should expedite its withdrawal from Afghanistan and pass the campaign against ISIS to local allies. The U.S. has been squandering its resources in endless Middle East wars, to the glee of our competitors. It’s time our wealthy friends take the lead in defending themselves.

Crucially, American policy-makers should focus on the greatest, potential future challenge: that China might rise in East Asia to become a far more formidable peer competitor than the Soviet Union ever was. Calls for a new Cold War against China are premature. Chinese military power does not warrant such alarmism. Local powers can counter China, especially since the U.S. navy commands the maritime commons. Instead, the U.S. should find ways to accommodate China’s status concerns, avoid being entrapped in small territorial disputes, and put itself in an advantageous position when a security competition intensifies. To that end, the U.S. should shed its fraying commitment to defend Taiwan, an increasingly difficult military mission. Most importantly, the U.S. should invest in ways to shore up its economy might. If China does become our peer competitor someday, then we need an economy capable of shouldering the burden of an arms race that will be more intense than we’ve ever experienced.

Countries develop new grand strategy when: national objectives are no longer necessary, desirable or feasible; methods or tools have proven consistently ineffective; and/or resources become strained.  All of this is the currently the case.

At the end of the Cold War, the U.S. saw no good reason to re-examine its global leadership role.  With the provision of collective goods, the U.S. benefited from an increasingly globalized order that seemed to want to reflect values and rules that benefited America.  Meanwhile our national debt was rising – and so was China.   Then came 9/11 and with it the determination that only we could stop the rising tide of violent extremism around the world.  Our debt continued to rise. And so did China.

It is this situation, as well as environment of vastly changed threats and opportunities, that the United States finds itself in.  While the 2017 National Security Strategy attempted to prioritize our objectives and is more “ways and means’ conscious  than many of its predecessors, it continues to perpetuate the assumption that the United States can and should retain primacy in the world, and suggests that should largely be through military power.

A couple things make this problematic.  First, we have about $23T in national debt.  The interest payments alone jeopardize our long-term ability to provide public services, and ultimately, national security.  Second and related, we have pressing domestic needs and finite resources. Thirdly, to refuse to accommodate China’s desire for global status will inevitably result in exacerbating the security dilemma and resultant costs. Finally, the last twenty years have proven our military is efficient in solving intra-state problems only by exception.

Professor Lisa Cobbs and this author recently penned an op-ed for the New York Times in which we suggested a few options for revised U.S. grand strategy, titled for public consumption.

The first is “City on a Hill.”  This strategy would have America lead mostly by example, seeking to achieve our goals of security and prosperity more with attraction than coercion.  Military sufficiency, a focus at home in order to demonstrate the benefits of a healthy democracy, and a greater emphasis on development and economic assistance would mark this approach.

The second, “Fortress on a Hill,” prioritizes the China question.  It assumes China will rise but cannot be trusted to be happy with a “co-” position.  It would retain large forces at home, identify and support strategic partners and allies abroad, and revamp America’s nuclear strategies to guarantee the security of liberal states, while respecting China’s reasonable demands for recognition of its preferences.

The third, “World Policeman”, is closest to what we now do.  We would continue to assume that we can best assure our interests by guaranteeing security and hope for greater prosperity for all countries that ask, maintain most foreign bases, increase spending on soft power assistance, and in general do whatever is necessary to remain the No. 1. Good Guy.  The big difference between this approach and current policy is that the United States would follow international rules, to include UN Security Council authority for the use of force.  A police force that acts outside the law exposes itself to charges of illegitimacy.

During this election cycle as well as the years ahead, Americans in public office and out have a pressing obligation to take a clear-eyed look at the costs and benefits of our outdated grand strategy.

Grand strategy does not need to play into the hands of hawks and threat-inflators. Instead, grand strategy can offer a framework from which to organize the nation’s goals and prioritize effort and resources where most needed. Grand strategists, in other words, do not need to go out in search of monsters to destroy. Grand strategy, as Rebecca Friedman Lissner explains it, “defines a nation’s international role, guides the alignment of means and ends, and serves as a lodestar for discrete foreign policy decisions” for policymakers. To be sure, the bureaucratic and ritualistic nature of some aspects of grand strategizing—like producing the National Security Strategy—open the door for self-interested agents to inflate threats. However, formal state planning is only one aspect of grand strategy, as Hal Brands and Patrick Porter have noted elsewhere.

Critics are right to warn of the potential dangers of grand strategy, especially when it comes to threat inflation. But the alternative—having no grand strategy—is worse. We shouldn’t throw the baby out with the bathwater. Instead, scholars and practitioners would be wise to keep the dangers of threat inflation in the back of their heads while charting a course for the United States’ role in the world moving forward.

Does it matter if the Trump administration lacks a coherent vision for how the United States engages in the world? Ionut Popescu has made the case that it doesn’t, arguing “Trump Doesn’t Need a Grand Strategy.” In his view, critics who fault the president for lacking a grand strategy are off base. Rather, we all should take comfort that a strategy will emerge over time as the Trump administration feels its way forward. As Popescu puts it, “emergent strategy” rather than “grand strategy” is the key to foreign policy success.

This view is misguided. To be sure, no approach to U.S. foreign policy can anticipate the myriad problems, crises and opportunities faced during an administration. Still, grand strategy remains central to guiding the overarching way in which the United States engages with the world. Lacking such a vision in advance of coming to office is a recipe for drift, wasted effort, and missed victories. And, on this basis, Trumpian learning over time is not a panacea.

One might dismiss the importance of grand strategy by simply equating it with planning.  Yet, in fact, grand strategy is really much… grander.  Specifically, grand strategy should be more broadly understood as the organizing principles that orient one’s foreign policy. Understood in this broader sense, the point of grand strategy is to highlight priorities and suggest tradeoffs.  Which is not something that can be left to drift. In a competitive and crisis-prone world, states pay a price for not knowing what they want to do, and how they are going to get there.

No grand strategy can anticipate everything. As a general guide to action, there may be situations that emerge where a prior approach does not suggest a clear sense of priorities. Still, leaders need to do more than simply learn as they go along and wait for events to facilitate an emergent strategy; otherwise, drift, forfeited opportunities, and incoherence are likely to result. Ultimately, grand strategy matters because it helps states and leaders chart a course through the fraught waters of international politics. Leaders can certainly sidestep strategic thinking and learn on the job—but they should not be surprised when their states perform less well than could otherwise be the case. At a time when international politics is more important than ever, scholars and practitioners alike need to recognize grand strategy’s virtues.

Photo Credit:Photograph from the Army Signal Corps Collection in the U.S. National Archives.